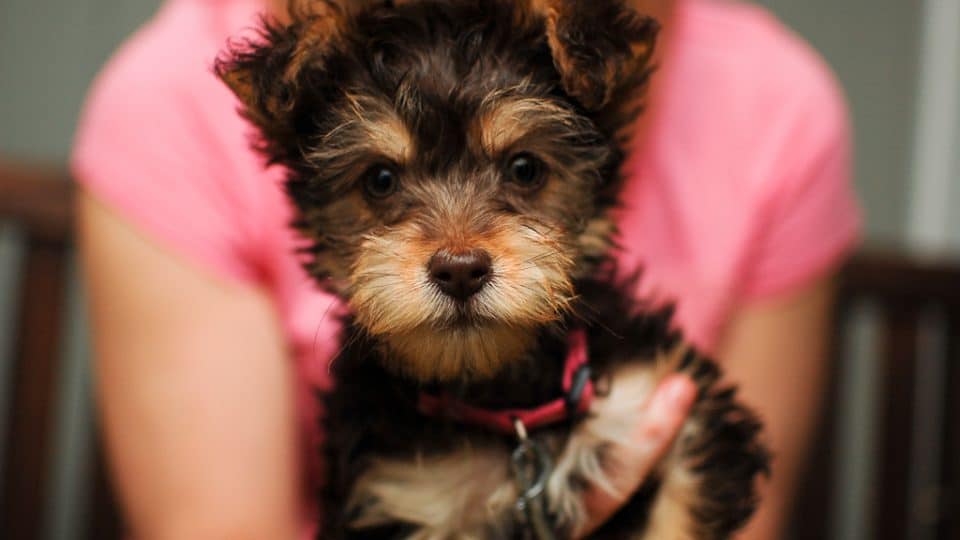 The Yorkshire terrier and the toy poodle are two breeds that well-known (and well-loved) by dog enthusiasts all over the world. So it’s not much of a surprise that a mix of those two breeds, known as the Yorkiepoo, is an up-and-coming star.

Whether you’re looking to add a Yorkiepoo to your family, or are just interested in learning more about this new breed, this is everything you need to know about the Yorkiepoo. 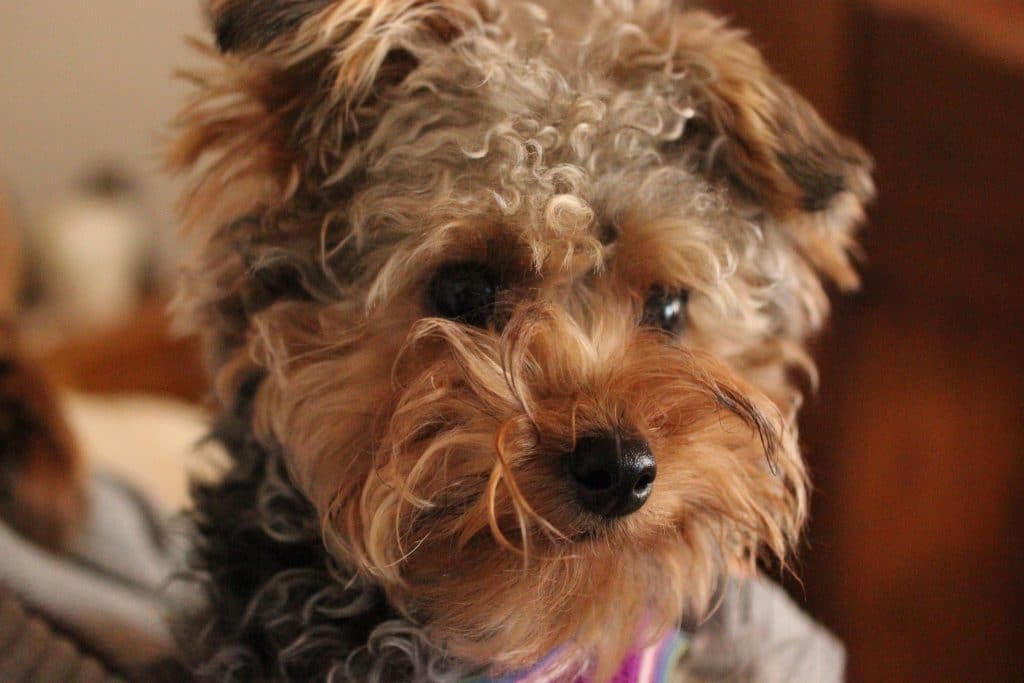 Both the Yorkshire terrier and the toy poodle have defining appearances that leave little question about their breed, but the same cannot be said for the Yorkiepoo.

As a mixed-breed dog, the Yorkiepoo can take on characteristics of either parent breed, and may favor either the Yorkshire terrier or toy poodle more—or it may possess a unique mix of both breed characteristics. Either way, it’s difficult to predict exactly what each Yorkiepoo pup will look like as it grows into an adult dog.

As far as size goes, we have to look at the parent breeds to find out what to expect with the Yorkiepoo. According to the American Kennel Club, the Yorkshire terrier is an especially tiny dog, standing just seven inches tall when fully grown, and weighing between seven and eight pounds.

The toy poodle has a different body structure, standing taller than the Yorkie at around 10 inches tall, yet weighing less, at only four to six pounds.

You can expect your Yorkiepoo to fall anywhere between the sizes of their two parent breeds, but thanks to varying trends in breeding the Yorkiepoo, it’s even more complicated than that.

The Yorkiepoo’s coat will almost always be long and soft, but that’s where the predictability ends with this designer dog. Its hair may be curly, straight, or a wavy mix somewhere in between.

The color is just as unpredictable, as Yorkiepoos have been known to display a wide range of colors, including black, black and white, black and tan, red and white, apricot, and tri-colored.

Since they have fairly long hair, you must brush your Yorkiepoo at least two or three times a week to keep the tangles at bay—though this can be avoided by keeping your dog’s hair trimmed short.

Yorkiepoos only need to be bathed about once a month, and that bath should also include a conditioner to keep both their coats and skin from drying out.

Of course, both the Yorkshire terrier and the toy poodle are famous for their designer hairstyles—something they’ve passed on to the Yorkiepoo. If this is something you desire in your Yorkiepoo, you can tack on an extra grooming appointment every month or so to that schedule. 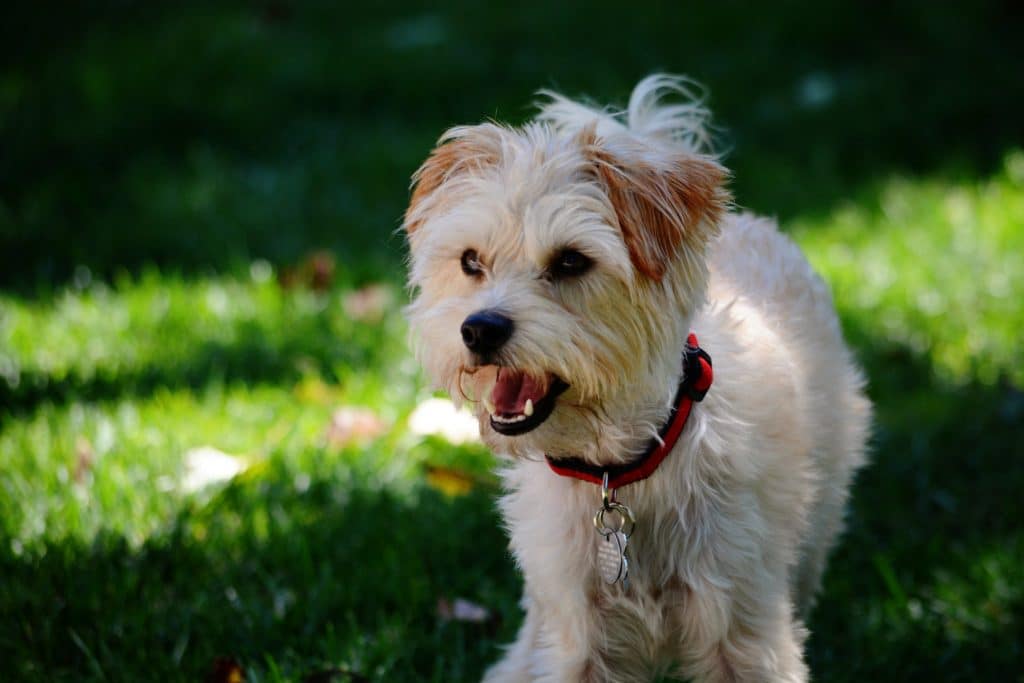 The Yorkiepoo is a high-energy, happy dog who’s often enthused about life. They thrive off attention and love to keep their family entertained and be the star of the show.

They love to play, and will be happy to take part in a quick game of fetch — but that will almost always be followed up with a desire for a cuddle (and maybe a nap on the couch).

Yorkiepoos quickly attach to their family, and will happily spend the day following their “people” around the home. Their families are not the only people that Yorkiepoos like—they’re happy to see anyone, and will greet both friends and strangers with the same enthusiasm.

If you’re willing to play a lot with your pet, a Yorkiepoo is a great match.

Since Yorkiepoos are such small dogs, they don’t need a lot of exercise. They love to run, but that can be accomplished in a yard… or by running circles inside. Let’s just say they’re highly adaptable.

For this reason, they do well in small spaces and can thrive in nearly any environment, from the city to the country.

Fenced in yards are great places for Yorkiepoos to run and play, but never trust a fence to keep them contained. Yorkiepoos are small dogs, meaning they’ll likely fit between or under most fences.

There aren’t many people who wouldn’t do well with a Yorkiepoo in their life.

Because of their low requirements for exercise (just chasing a ball or a short walk around the block is enough), Yorkiepoos are great choices for seniors or those with mobility issues.

They’re also great with kids and will happily join in with play—but many Yorkiepoos aren’t big fans of being picked up. For this reason, it’s important to monitor your Yorkiepoo the first few times it’s around a new child.

Since Yorkiepoos get so attached to their families, they rarely do well with being left alone for extended periods of time. In fact, they’re often prone to separation anxiety, a disorder that can be unhealthy for both your dog and the state of your home. If left alone for long, they may take their frustrations out on your furnishings.

Yorkiepoos do best in households where at least one person is home most of the time. 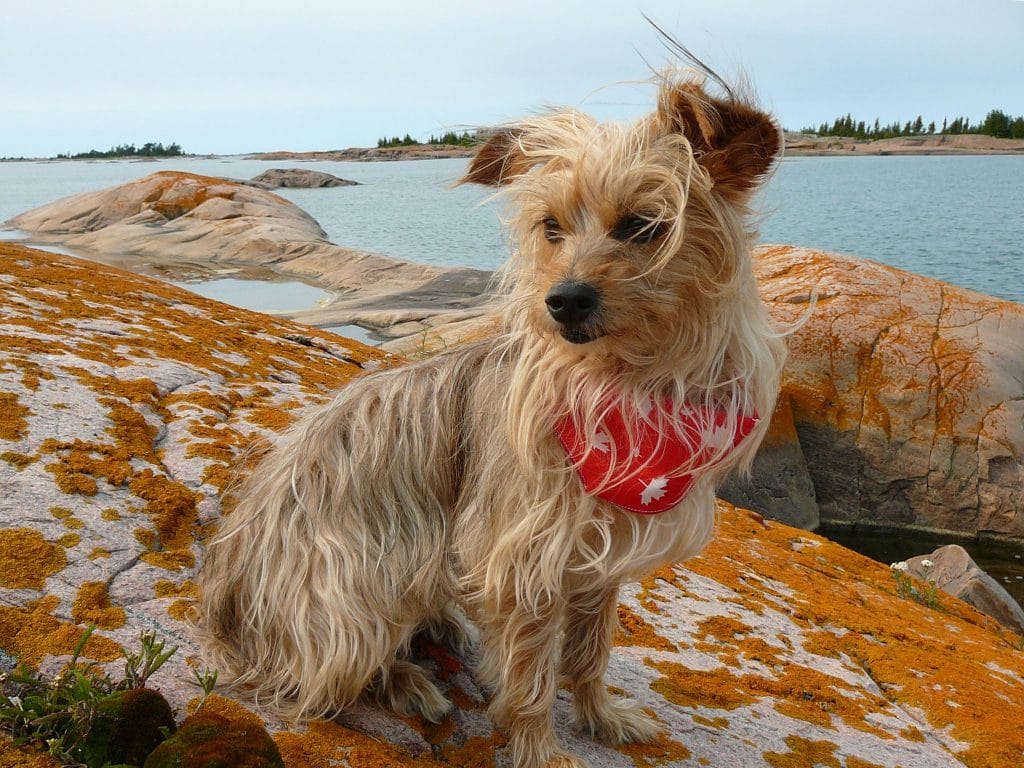 Since they’re always so eager to please, you’ll likely find that your Yorkiepoo is a highly trainable dog.

Not only can they learn basic commands fairly easily, but you may also teach them fun party tricks like playing dead or giving high-fives.

The key to training a Yorkiepoo is to remain positive. Match their excitement by praising each success with great enthusiasm (and their favorite treats), and your Yorkiepoo will be rolling over (and doing countless other tricks) in no time.

While Yorkiepoos respond well to praise and treats, they have the opposite reaction to harsh words or actions. Keep these behaviors at bay during training, as it could cause your Yorkiepoo to stop cooperating completely.

According to the Institute of Canine Biology, a recent study gave evidence that dogs of mixed heritage are less likely to develop genetic disorders than purebred dogs. This means that while there’s never a guarantee that your Yorkiepoo will be in perfect health, it has a solid chance.

Of course, Yorkiepoos are still at risk for any health issues their parent breeds are predisposed to, so we must look at the Yorkshire terrier and toy poodle for clues about what health issues owners might expect to run into with Yorkiepoo dogs.

While toy poodles are also typically healthy thanks to responsible breeding, they do have a few more issues to look out for. Toy poodles, like Yorkies, are predisposed to eye issues, as well as dislocated hips and knees. They also may suffer from idiopathic epilepsy and immune-mediated disorders.

History of the Yorkiepoo

While it’s likely that Yorkshire terriers and poodles have been mixing for many years, Yorkiepoos have become popular, along with other designer breeds, over the last 20 or 30 years.

To really understand the history of Yorkiepoo dogs, though, look to their parent breeds for more information.

Yorkshire terriers have been around for centuries. They were originally bred from Scottish terriers, designed by Scottish weavers during the 1800s, around the time they migrated north to England. The small size of Yorkies made them the perfect candidate for hunting rats and other rodents that were common troublemakers in textile factories.

Fortunately for Yorkshire terriers, they didn’t stay in the working world for long. In 1886, Yorkshire terriers were recognized by England’s Kennel Club, and not long after became favored by English ladies and gained a reputation as lapdogs—something they’re still widely known for to this day.

Toy poodles started off as standard poodles and originated in Germany as water retrieving dogs. Thanks to their curly, waterproof coats, high intelligence, and talents in swimming, they fit the bill for this duty with ease.

The familiar styling of the poodle, with their shaved tails, legs, and necks, was started out of practicality during this time—it gave them more ease of movement in the water, but kept their most important parts shielded from the elements.

When they moved from working dogs in Germany to more elegant companions in France, poodles started appearing in smaller sizes, giving way to the toy and miniature varieties that are so popular today.

Getting a Yorkiepoo dog 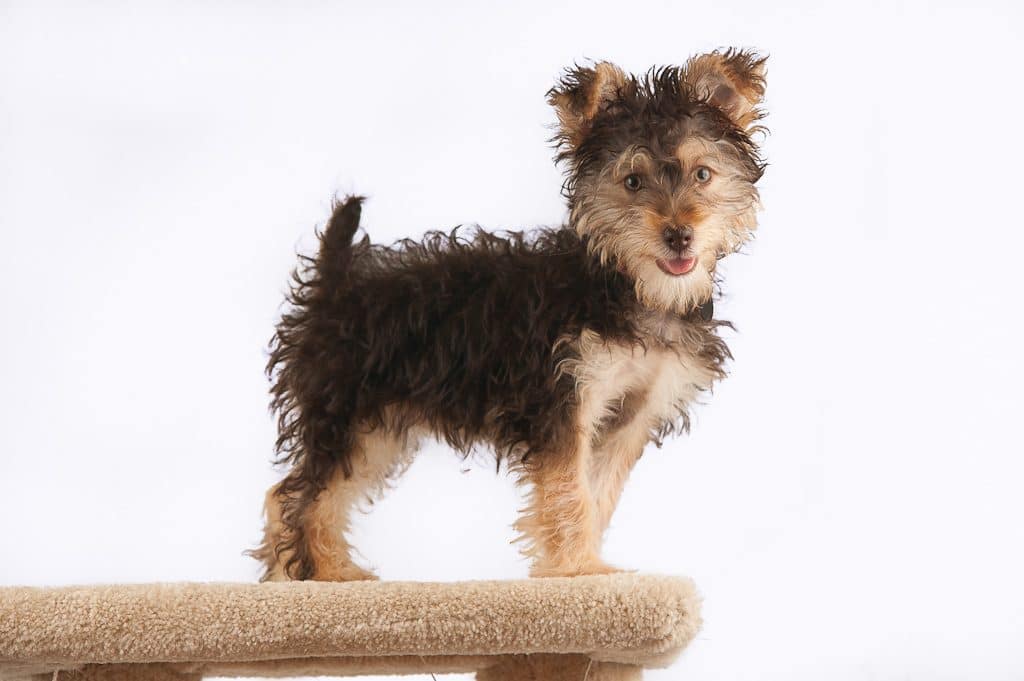 Bringing a new dog into your home is not a decision to make in haste. Not only do you need to test whether a dog fits with your lifestyle, family, and home, but you also need to take some time to figure out what breed of dog is best suited to you.

If you’ve decided on a Yorkiepoo after weighing all the pros and cons, you’re in for many years of entertainment and unconditional canine love. But deciding on a dog is only the first hurdle you’ll encounter. Now it’s time to track down a Yorkiepoo.

The two most popular choices for finding Yorkiepoos are through breeders and rescue organizations.

Since Yorkiepoos are a new breed, there may not be a lot of options for finding one through a rescue organization, but it is possible. Internet searching will turn up options for rescued Yorkiepoos, but you may have to travel to find one. If the organization isn’t local, do your research and ask questions to make sure they’re reputable.

There may be drawbacks to adopting a Yorkiepoo dog through a rescue organization. It’s likely the dog you find will not be a young puppy, and you may not learn much about its past. However, its age may also be a plus—there’s a good chance an adult Yorkiepoo will be house-trained, and it will probably have been socialized through the rescue. It will also have been spayed or neutered and will have received all of its required immunizations.

All of this reduces the cost of ownership for you—as does the adoption fee, which is usually much cheaper than the price of purchasing a Yorkiepoo from a breeder.

It’s often more difficult to find reputable Yorkiepoo breeder since they are not a breed registered by the AKC, and therefore won’t be listed among their approved breeders. Before you commit to a Yorkiepoo breeder, ask around—your vet or other local breeders may be a good resource.

Want to know more about Yorkiepoos? Rover has you covered with articles on their parent breeds.