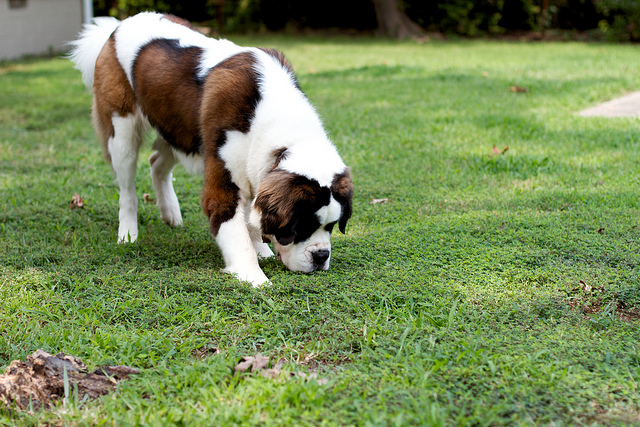 Our favorite perfume, a holiday meal cooking in the oven, a fragrant bouquet of flowers, even a stinky pile of dog poop—smells can trigger all sorts of good (or bad) memories and feelings in humans, but a dog’s sense of smell is something else entirely.

Why do dogs strain on walks to smell that fire hydrant, wiggle their noses back and forth furiously in the kitchen while we cook, or even smell human crotches and dirty clothes? We talked to dog psychology expert and author of How Dogs Think: Understanding the Canine Mind, Dr. Stanley Coren, to decode the practical to the downright disgusting aspects of a dog’s sense of smell. 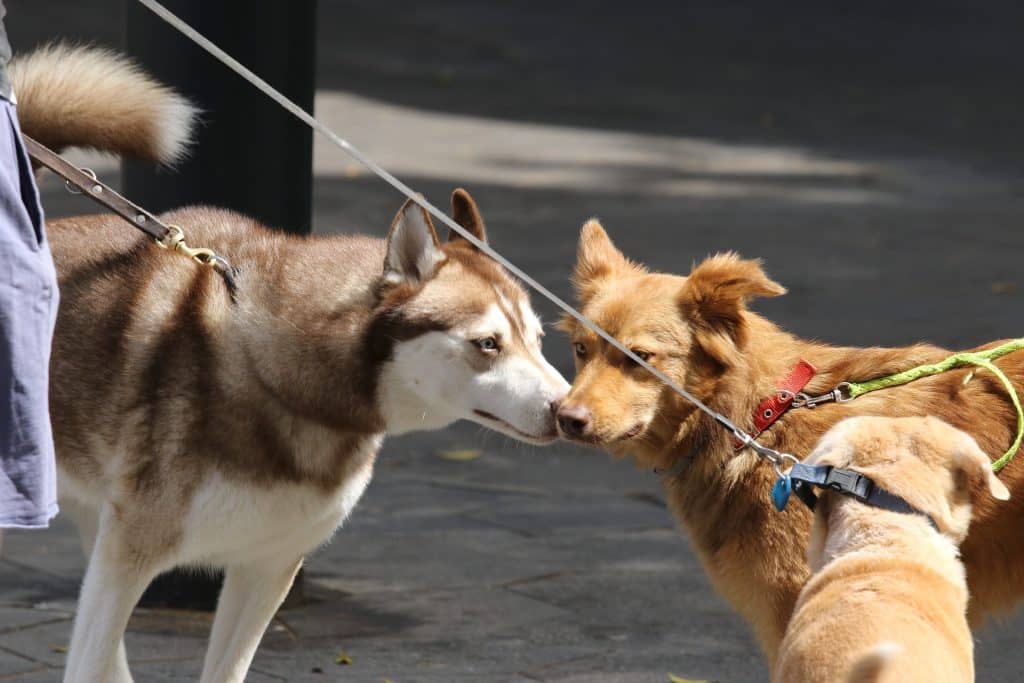 “Dogs are living in a totally different world than we are, filled with much, much more information than we can possibly process about smell,” Dr. Coren adds. “That’s the way they parse information.”

Since dogs have so many more olfactory receptors, they’re able to distinguish individual smells quite easily—their way of seeing the world. Dr. Coren offers this analogy to explain:

“Humans are visual animals and dogs are olfactory animals. For visual animals like ourselves, suppose we have a quilt and throw a book on the quilt and throw a pencil on top of the book. We don’t see a mishmash there—we see a pencil, a book, and a quilt. We break it up into individual components visually. But because our sense of smell is poorer than a dog’s, when we walk into a room and someone is cooking chili, we smell that mishmash smell of everything altogether, but a dog’s brain breaks it up; they smell the meat, the tomatoes, the spices, the peppers—each being separate. There is much more for them to process, so they spend more time sniffing things because they are trying to distinguish the components.”

The ability to smell individual components essentially becomes a dog’s way of seeing the world. Although they have limited color vision and can detect motion fairly well, dogs have various vision challenges.

“They have a number of flaws in comparison to primate vision,” Dr. Coren explains. “Dogs are mostly farsighted, they have less binocular vision, less ability to perceive depth, and [their ability to see] things really close to them is very bad because their muzzle gets in the way.”

Of course, dogs have ways to offset their vision shortfalls—the foremost among them being their heightened sense of smell.

With such a superior sense of smell, why do dogs seem to prefer the stinky? From an evolutionary standpoint, rolling in something smelly is pretty straightforward—it was simply a way to mask their scent and become better hunters. Modern lap dogs don’t really see it that way—nowadays, it’s more like sensory overload.

“My theory is dogs roll in stinky stuff for the same reason humans wear loud Hawaiian shirts,” Dr. Coren says. “It’s a matter of their dominant sense of smell, whereas, for humans, the dominant sense is vision.”

Dogs smell urine and other dogs’ butts for entirely different reasons, though. Since dogs read the world through their noses, Dr. Coren says they write messages to each other in urine—things like age, gender, mood, even health—and those messages linger behind long after the dog has gone.

“The smell goes away for humans because it becomes less strong when it dries,” Dr. Coren adds. “Smell has to be carried to a [human] nose through moisture but it sticks around for quite a long while for dogs.”

But they do like to refresh their scent, which is why a dog will stop at his favorite tree or fire hydrant if you follow the same path on your daily walk.

The sense of smell and taste are closely related in humans, but not as much in dogs. Humans have five times more taste receptors than dogs—on average, dogs will have around 1,500 taste buds while humans have roughly 6,000.

If your dog is a picky eater and not enticed by the smell of his kibble or snacks, Dr. Coren suggests adding warm water. “Tastes are more dissolved in water and more available to the dog,” he says. “It releases some of the smell, which keeps the dog eating.”

Even though their sense of taste isn’t as refined as a human’s, surely dogs must know poop doesn’t exactly taste good. Dr. Coren says eating poop is simply a matter of accessing undigested nutrients.

“Dogs have a short digestive tract and the richer the diet—like a really high-fat diet—the more likely there will still be undigested nutrients in there,” Dr. Coren explains. “You certainly don’t want them to kiss your face afterward, but dogs are a waste not, want not type of animal.” 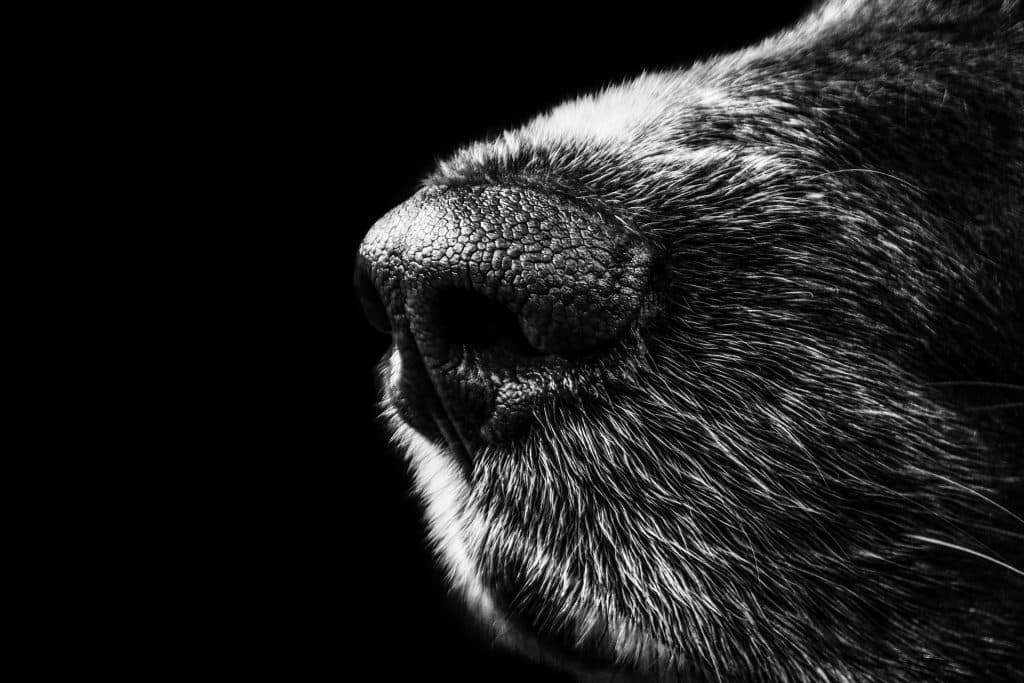 A dog’s nose is so unique, it’s often compared to a human fingerprint—no two are alike.  Dr. Coren says prior to microchipping, taking a nose print was a method of identifying dogs. If you want to try taking your dog’s nose print—perhaps framing it next to his picture—Dr. Coren outlines the method in this blog post.

“It’s a great game you can play with the kids,” Dr. Coren adds. “It’s going to take several tries—cooperating with this sort of thing is not in the dog’s nature.”

Why do dogs sniff humans?

We already know dogs can learn all sorts of information by sniffing other dogs’ butts, but does the same principle apply to sniffing human crotches?

Dogs have a special organ in their olfactory systems called the Jacobson’s organ, otherwise known as the vomeronasal organ, which detects humidity rather than scent. This organ makes dogs especially sensitive to pheromones, a chemical that animals release into the environment to convey useful information.

Dogs can pick up on ovulation in humans—which is why sniffing female human crotches may increase at certain times of the month—as well as in other animals. According to Dr. Coren, dogs are even used to help dairy farmers capitalize on a very short fertility window for cows. Dogs are also trained to sniff out certain types of cancer, when a person will go into diabetic shock, and even certain strains of infectious bacteria.

Humans primary sense is vision, but dogs “see” through their nose. With their acute sense of smell, they distinguish individual components of smell to understand the world around them. Although often silly and sometimes stinky to us, these sniffing moves are perfectly normal to our furry friends.