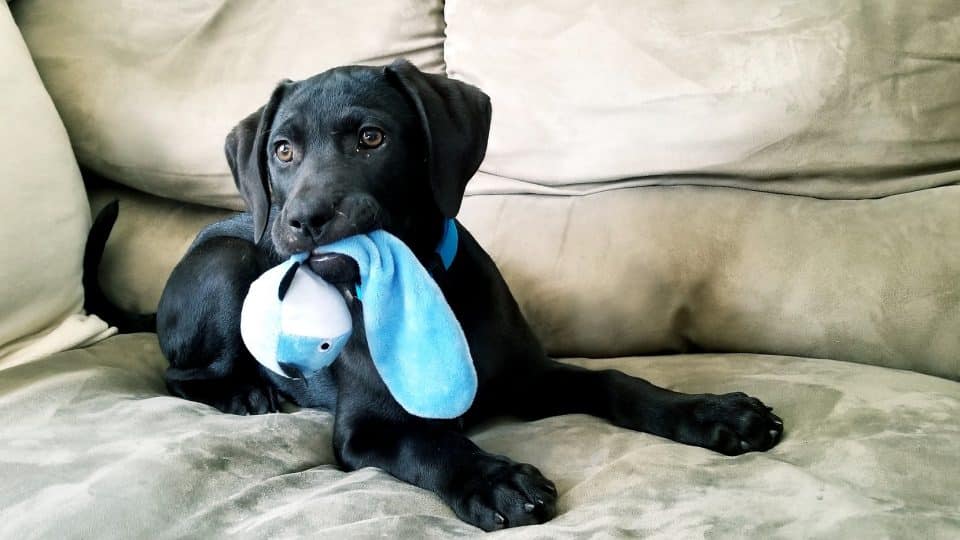 Among the instincts domestication has profoundly altered is a dog’s drive to hunt, attack and eviscerate prey. Over the years, we’ve fine-tuned these instincts, picking and choosing the ones that would benefit us most. In herding breeds like Australian shepherds and border collies, for example, we selected for stalking and chasing but not for attacking prey. Sporting breeds like retrievers and spaniels we selected for their abilities to sniff, scan and grab prey but not to eviscerate it. 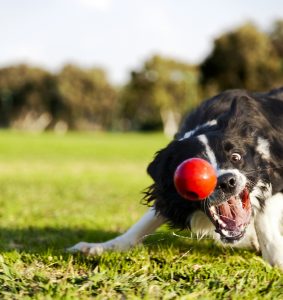 A Border Collie dog caught in the middle of catching a red rubber ball, on a sunny day at an urban park.

While these days most dogs are house pets with no real need to hunt, catch or consume prey, the genetic drive hasn’t completely disappeared. But without easy access to rodents and birds, most save what’s left of their predatory drive for play. It’s why retrievers chase balls, why greyhounds run like lightning and why many many dogs just can’t help but shake their toys like the predators they once were.

In the wild, a wolf shakes a prey animal to quickly and easily kill it. That intense shaking back and forth of the head snaps the neck of the creature they’ve got caught between their teeth. The faster the kill, the quicker the meal.

While we’ve taken away the need for pet dogs to depend on hunting for food, their drive to catch and kill still exists. And the closest thing most can get to a squirrel or rabbit is a stuffed toy. Genetically-speaking, shaking a soft toy fulfills the same instinct as shaking a rodent. The squeaker inside adds to that drive. The high-pitched noise mimics that of a distressed animal and most dogs, they just can’t help but love the sound. 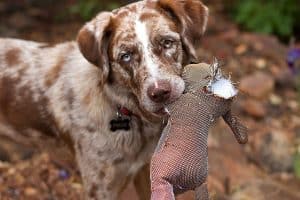 Once the toy is good and “dead” following a serious shake, some dogs then go on to disembowel their catch, pulling out stuffing and that squeaker as if it were the ultimate prize. Not every dog shakes-to-kill first. Some aren’t particularly interested in the “killing” portion of the game, they’d prefer just to hunker up and disembowel the toy between their paws. That’s part of the predatory drive too, but it’s what’s left over after the catch-and-kill instinct has been “turned off” in a dog’s genes due to breeding.

While a lot of dogs shake their toys, disembowel their toys, or both, those that have a history of being bred for work may be more likely to display all three parts of the predatory drive – catch, kill, consume – than just one or two. Terriers, many of which were bred to hunt out and destroy rodents, are especially adept at toy killing. Northern breed dogs, too, often have strong predatory drives simply because they’re genetically closer to their canine ancestors.

Ask your dog why they do it, though, and chances are they won’t be able to explain – and not just because they can’t talk. It’s likely that most dogs who shake and destroy their toys do it because it feels good to have a job. After all, isn’t that what teeth and claws were made for?

Why does my dog carry his toy everywhere?

While predatory drive may partially explain why some dogs get ultra-attached to a particular toy or type of toy, sometimes even carrying around the stuffingless husks they’ve already eviscerated, there may be other reasons your dog likes to greet you at the door with a toy in their mouth or take a stuffie to bed. 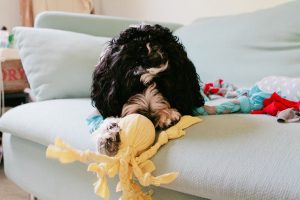 Some pups who carry around a toy are like toddlers who carry around their favorite doll. They do it because it’s reassuring. Some dogs may even treat their toy as a surrogate puppy, the same way some kids will interact with their dolls as if they are parent-and-child. Keeping a favorite toy by their side at home or even on walks can give a dog confidence or comfort.

For other dogs, the reason is a bit more obvious. The more often they carry around a toy, the more likely a family member will engage with them in play. If your dog greets you at the front door with a ball or picks up their tug rope every time you stand up from your desk, they may simply be letting you know that any time is a good time for fun.