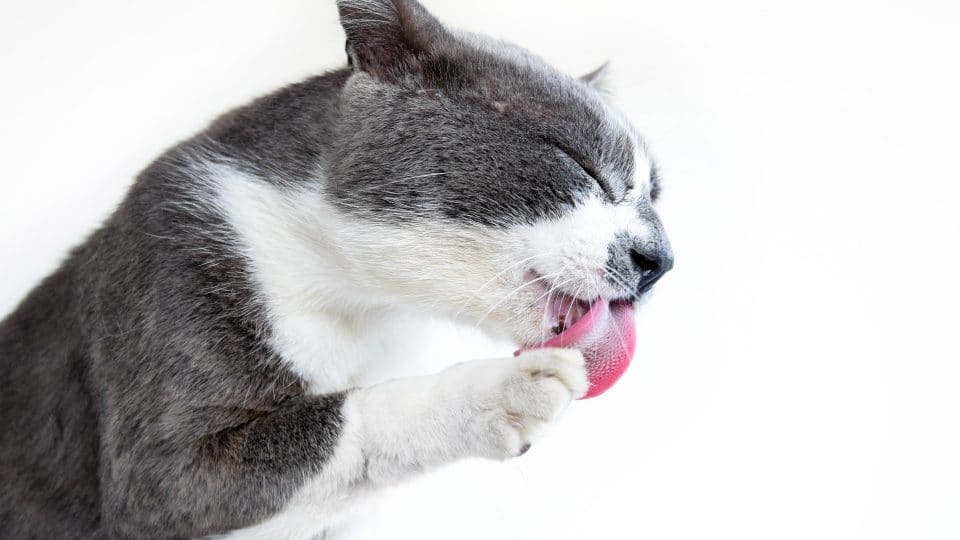 For cats, grooming is a full-time job—many cats spend as much as half of their waking hours grooming. I don’t know about your cat, but my neighbor’s cat Kitty doesn’t spend much time getting dirty. However, she’s working hard to keep her long black fur tidy as she sits next to me right now. Why would Kitty need to clean herself for hours each day?

Grooming serves a few purposes. When a cat combs her hair with her rough tongue, she’s removing dirt and loose hairs as well as reducing odors that might alert both prey and predators to her presence.

She also combs healthy oils from her skin through her coat, and co-grooming can be a way of bonding with other cats. 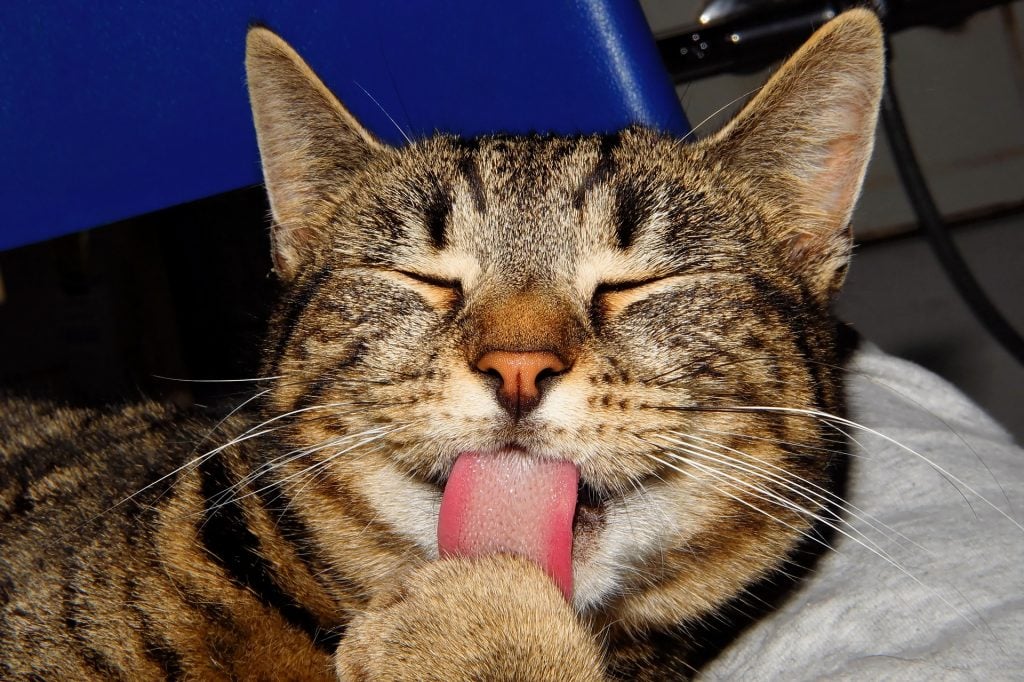 What makes a cat’s tongue rough?

Kitty’s tongue, as well as the tongues of all types of cats from ragdolls to snow leopards, is covered with tiny curved spines. These spines, also called papillae, are hardened with keratin, like our fingernails and Kitty’s claws.

The tiny papillae have a shape and angle very similar to a cat’s claws, with their spiny shape curved backward so that they point toward the back of the cat’s mouth.

The spines move through her hair as she moves her head upward and pulls her tongue into her mouth with that familiar lapping motion. These spines act as a comb and keep Kitty’s coat looking tidy. The curve of the spines makes it easy to remove hair from the tongue surface in a single clump (unlike a hairbrush with bristles that stick up).

These tiny spiny papillae are also used to shred meat and pick up food while eating.

Tongues are Excellent at Removing Tangles and Mats

The tiny spines on Kitty’s tongue can pivot at their bases, creating a flexible comb, which is very helpful with removing mats and tangles. When Kitty widens her tongue for a big grooming lick, the spines stand up so that they run perpendicular to the hairs of her coat, allowing the spines to maximize contact with the hairs.

The video above shows that pivoting action—it works because the durable claw-like spines are attached to the soft, flexible tongue beneath. Pivoting is the secret to detangling mats and keeping her coat fluffy.

Remarkably, when cats lick their fur, they are also cooling off their bodies. The spines on a cat’s tongue are hollow and the space inside each spine wicks up saliva from a cat’s mouth as she grooms. She wets her fur with her tongue each time she licks, and the water on her fur gradually evaporates, cooling the surface of her coat. This creates a temperature gradient between the surface of her skin (very warm) and the outside layer of her fur (as much as 63ºF cooler), so heat moves away from her body surface.

Cats only sweat from hairless areas like their paw pads and chin, not from the rest of their skin, so this type of evaporative cooling through grooming is a really important way for cats to control their body temperature, especially with such thick and luxurious fur coats. 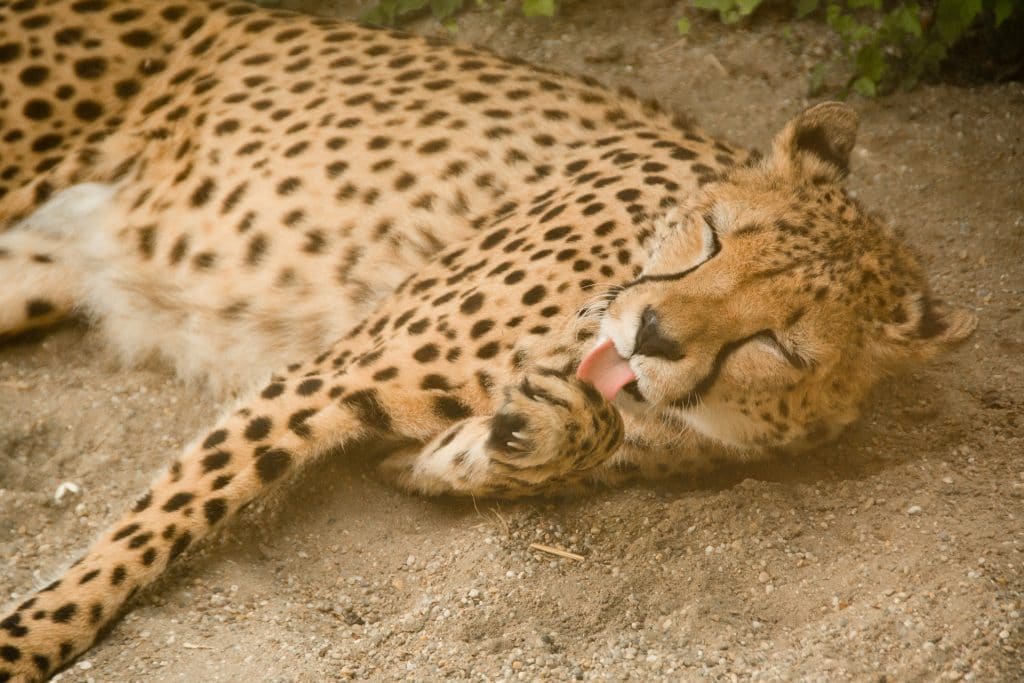 Big Cats Have Spiny Tongues, Too

The spines on the tongues of big cats like lions, leopards, and tigers, are the same size and shape as the spines on our little domestic cats’ tongues. Fortunately, their larger tongues have a lot more of these spines—handy since lions have a lot more fur to cover with each grooming. The grooming behavior throughout the family Felidae looks almost identical, as you can see in the video above from researchers Alexis Noel and David Hu.

Do Other Animals Have Spiny Tongues?

You bet! Other animals have spiny tongues, too, and the spines are often used to capture food in one way or another.

The giant ant eater’s 2-foot-long tongue is densely coated with tiny sharp spines to help it capture insects. Many birds, including penguins, flamingos, geese, and some raptors use the spines on their tongues to grip the prey they’ve just caught or filter out small edibles like shrimp or fish from the water.

Like cats, cows use their scratchy tongues to groom themselves and their calves—cow tongues have the right scratchiness to remove ticks from their skin and are just long enough to clean off their big noses.

Looking for a cute distraction? Go ahead and spend a few minutes watching cows play with their tongues. Veterinarians think this quirky motion comes from a cow’s innate behavior of sweeping grass into their mouth using their tongue—but grain-fed cattle don’t get to use their tongues for this purpose, so they do the same behavior in play.

If you want to take a deep dive into animal tongues and how they work, check out the research article The Tongue as a Gripper by Alexis C. Noel and David L. Hu in the Journal of Experimental Biology. Kitty and I have been talking about the time-lapse photos of frogs catching bugs in the article all day. Or maybe it was just me talking while she napped? 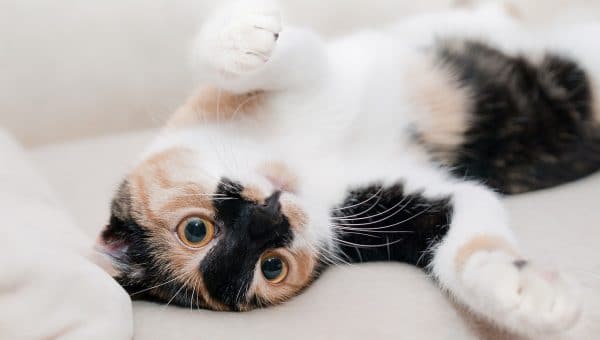 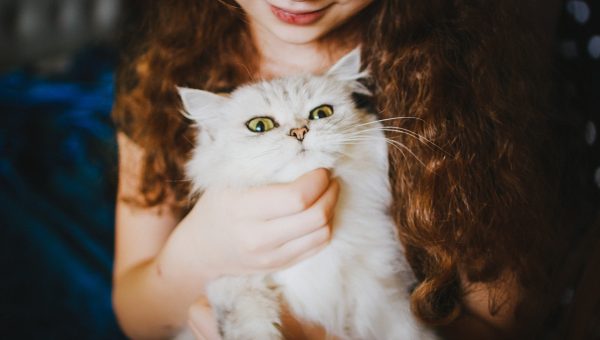