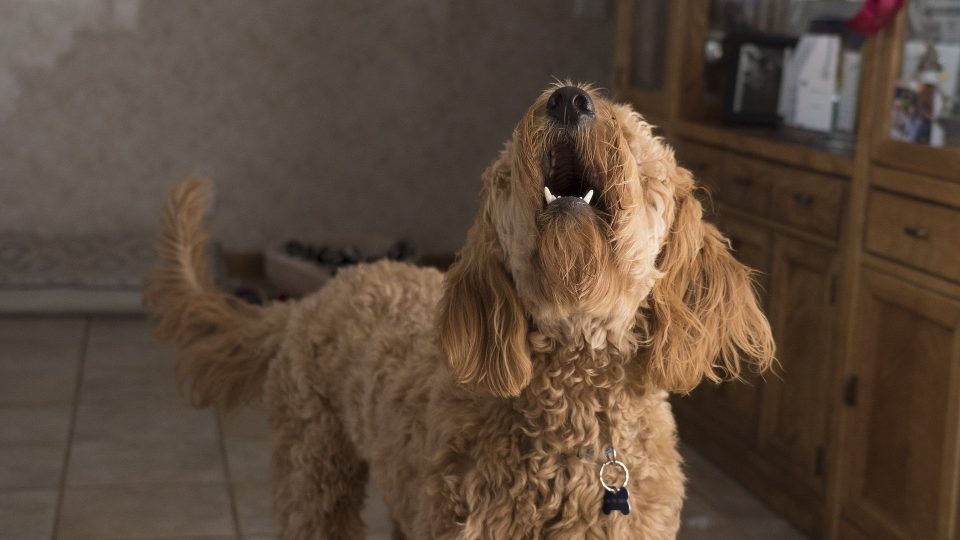 Dogs bark. It’s what they do. If yours doesn’t, you might want to check their pulse.

As a dog trainer, I know that barking can be both a nuisance for pet owners as well as an incredible tool. While I don’t necessarily consider barking to be a dog’s primary form of communication—I’d put body language above vocalization—it is an important way for dogs to express themselves and relay information.

If your dog barks when the mailman arrives, he’s trying to alert the family to an approaching intruder. If your dog whines when you first leave him alone, he is expressing concern or discontentment with your absence.

But there’s more we can learn about what a dog’s bark means. Decoding the meaning behind your dog’s barking primarily boils down to three factors: frequency, duration, and pitch.

The more rapidly your dog barks, the more urgently they are attempting to communicate. While the emotional source of a rapid bark could be fear or excitement, a quick woof-burst is intended to get your attention fast.

A dog’s bark can be high-pitched or low-pitched. High-pitched barks are typically associated with a frightened dog while low-pitched ones are meant to be threatening. Because every dog has a different voice, their pitch may not always be easy to read. A high-pitched Chihuahua bark, for example, will sound quite different from one from a Great Dane.

No two woofs are created equal. A quick “yip” kind of bark is likely to suggest your dog was startled or surprised whereas a longer, drawn-out bark or howl communicates other information.

How long your dog barks for is also relevant. A dog that barks frequently at a variety of stimuli may be doing so out of boredom or over-stimulation, while one that barks to alert the family will typically stop barking once their job is done.

The combination of frequency, pitch, and duration create several common types of barks with specific meanings. Here’s a guide to help clarify what your dog is trying to tell you.

Alert or alarm barking tends to be the easiest type of bark to identify. By its very definition, the alert bark is your dog attempting to tell the family about the arrival of a stranger or some other unfamiliar, unexpected stimuli.

You can hear the intensity to communicate in the bark. It usually starts suddenly, beginning with a quick high-pitched bark then continuing into rapid-fire woof, woof, woofing. In most cases, the barking will stop once the stimuli is gone (i.e., the mailman walks away) or your dog has been assured that the stranger is no threat to them.

The most annoying of all your dog’s barks, demand barking typically involves your dog barking and/or whining at you until you give them what they want, be that attention, food or something equally as desirable.

I hate to break it to you but you (or a family member or previous guardian) are probably responsible for creating your barky little demand-monster. I’m sure it began innocently: your dog gave you the head cock and puppy eyes and you gave them a corner of your toast at breakfast. “Ah-ha,” your dog thought to himself, “if that worked, I bet the human will move twice as fast if I whine or bark.”

And to shut your pup up, you did. But once demand barking starts, the only way to get rid of it is to NEVER GIVE IN. If your dog barks or whines at you for attention or food, ignore them. Walk into another room and close the door if you have to. If your dog is never rewarded for their demanding vocalization, eventually it will extinguish itself.

But watch out! If you even occasionally give in, your dog will maintain hope that their strategy works and the behavior will continue.

A compulsive barker is a dog that barks at pretty much everything—noises, people walking by, birds, squirrels, you and the rest of the family. In most cases, there is probably a variety of emotional stuff going on under the surface of a compulsive barker. Fear, for example, is a common root of compulsive barking.

But one surefire suspect is boredom. If you think your dog may be bored, try increasing both their physical and mental stimulation. Walks, training, sniffing games, puzzle toys and playtime are essential to keeping a bored compulsive barker quiet.

Dogs who suffer from isolation distress or separation anxiety almost always vocalize when left alone. While these vocalizations can range from whining to barking to howling, a common expression is a long string of barking—sometimes the entire time they are alone—with frequent, intentional pauses.

In this type of bark, a dog is calling out and asking for companionship. During the pauses, they listen for any response. To help your dog overcome this kind of barking, check out our series on separation anxiety.

A dog that play-barks is probably doing so while, you guessed it, at play. Barks that occur during play are often quick, loud woofs that slip out in excitement or to encourage chase, tug or another interaction either with you or another dog.

In a group of dogs, sometimes one will take on the role of “referee” or “cheerleader,” barking at the other pups as they romp. In this case, the vocalization often occurs as several rapid strings of barks within and nearby the action.

Why do so many dogs howl when they hear a fire engine or similar loud, high pitched noise? Howling is a way for dogs to communicate important information across long distances—the sound carries further and is sustained for longer than a bark. When your dog joins in a chorus of fire engine sirens, he is helping to spread the word that something is up, helping to guide a loved one home, or informing a stranger to stay away from their territory.

But a howl can mean other things, too. Howling sometimes results from extreme distress or despair and a dog that has been left alone may howl in an attempt to make contact with someone. Additionally, some dogs are bred to howl when they’ve discovered something, like a hound that’s found a rabbit, for example.

As dogs age, their cognitive capacity declines just as it does in humans. The level of dementia (canine cognitive dysfunction) experienced by most dogs will be relatively minor. Some dogs, though, will suffer in their golden years in much more obvious ways that may include pacing in circles, getting trapped in corners or behind furniture, withdrawing from the family and becoming increasingly confused.

Barking is also a common symptom of canine cognitive dysfunction but what it’s trying to communicate may not always be clear to your senior. They may bark for help if they become frightened, trapped or scared or may simply bark because they are disoriented.

Always check on a barking dog that is suffering from dementia to assure that they are safe. Soothe them and don’t scold them for barking. Remember, they are losing control of their actions and don’t mean to upset you.