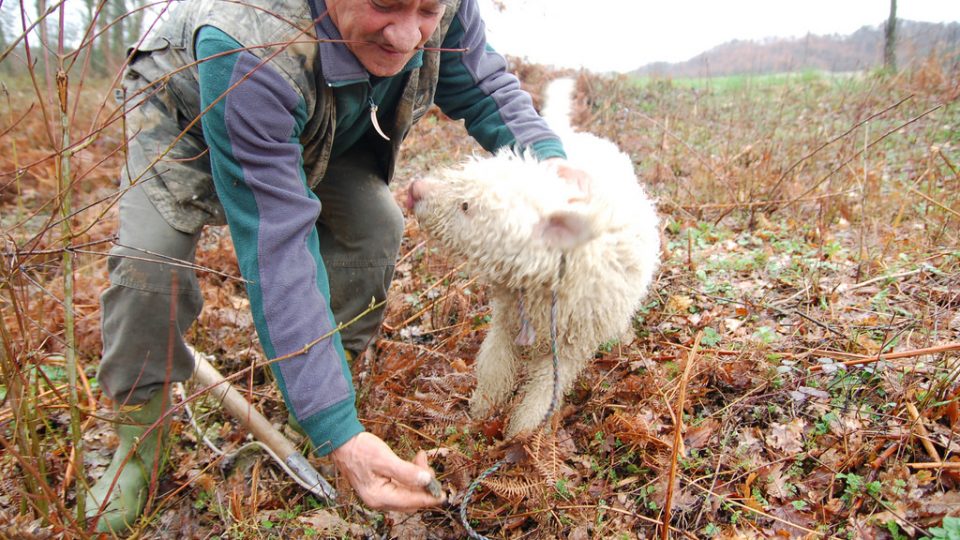 On a crisp winter morning in Oregon, a dog named Dante runs through a stand of Douglas Fir trees. Tail wagging, he happily sniffs along the forest floor. Suddenly, he stops, tail wagging harder, and digs his nose into the ground.

“Dante, did you find one?” asks his person, joining in the dig with his hands. “Look at that! All right!”

Dante, a Lagotto Romagnolo trained in the art of truffle-hunting, has found an Oregon black truffle mushroom, one of the most valuable delicacies in North America.

Truffle dogs like Dante are used across North America and Europe to sniff out delicious (and costly) mushrooms. But how does truffle-hunting work? What kind of dogs can be trained to hunt truffles? And just why are these underground mushrooms so expensive? Read on to learn all about truffles and the talented dogs who find them.

What are truffles (and why are dogs so good at finding them)?

Truffles are a type of mushroom that grows underground in the roots of trees. They’re used in cooking, particularly fine Italian and French cuisine, and are valuable because they’re so difficult to find. Ripe truffles are best found by scent, and that’s where dogs come in.

According to Dante’s owner Charles Lefevre, a mycologist (that’s a mushroom expert) who specializes in the cultivation of truffles, truffle dogs serve as quality control.

“They choose which truffles are ready,” he says, “and the reason that matters is the truffle needs to be mature and ripe in order to have its culinary value.”

Truffles picked before their time are less flavorful and less valuable than ones found at peak ripeness. With rarer truffle varieties fetching up to $2,000 per pound, dogs like Dante help maintain a lucrative truffle market. But it’s not all about the money. For dogs with their super-sensitive noses and eager-to-please attitudes, truffle hunting can be a fun and fulfilling pastime.

Which dogs can hunt truffles

But Lagotto Romagnolos aren’t the only dogs who can sniff out a ripe underground mushroom. Breeds known for their noses are particularly gifted at finding truffles. Some popular truffle-hunting breeds include:

Truthfully, any trainable dog with a decent nose can learn to find truffles. In an interview with the New York Times, dog trainer Elizabeth Kalik explains: “Scent training is one of the easiest things you can do with a dog, because of the natural proclivity.” Her company, NW Truffle Dogs, has trained everything from Pomeranian to pit bull and a fair number of mixed-breed rescue dogs. If your dog has a strong nose and likes to train, truffle hunting could be the hobby for you.

Truffle hunting as a hobby

Truffles are a valuable culinary delicacy, but dogs don’t care about money or fine cuisine. Like any good dog hobby, truffle hunting is primarily all about fun, enrichment, and bonding.

Take Molly the Beagle and her human Leslie,  profiled in a Buzzfeed article about truffle dogs. They took up truffle hunting after going through scent training, and participate because it’s a good time, not because they’re foodies. In the 2016 Joriad (that’s Oregon’s annual truffle dog competition), Molly didn’t find a single truffle, but she had a whole lot of fun.

“If the dog isn’t having fun, [we] stop,” Leslie tells the Buzzfeed reporter.

How to join the great truffle hunt

Geography will play a role in whether or not truffle hunting is a logical hobby for your dog and you. In North America, truffles are most prevalent in the forests of the Pacific Northwest, but can also be found along the east coast and in Appalachia. Get started by searching for “truffle dog training” in your state (where I live in Oregon, there are several truffle-hunting courses to choose from).

If you live in a truffle-free part of the country, you can take a truffle-hunting vacation. Road trip to the west coast with your dog for a truffle hunting B&B weekend, or visit at the end of January to watch the best truffle dogs in the country compete in the Oregon Truffle Festival’s Truffle Dog Championship.

Even if you don’t live in a part of the country where truffles are found, you can still try scent training with your dog. Check out a basic guide to scent work, and start working with your dog to identify different scents. Who knows, you just may have a truffle dog like Dante on your hands!