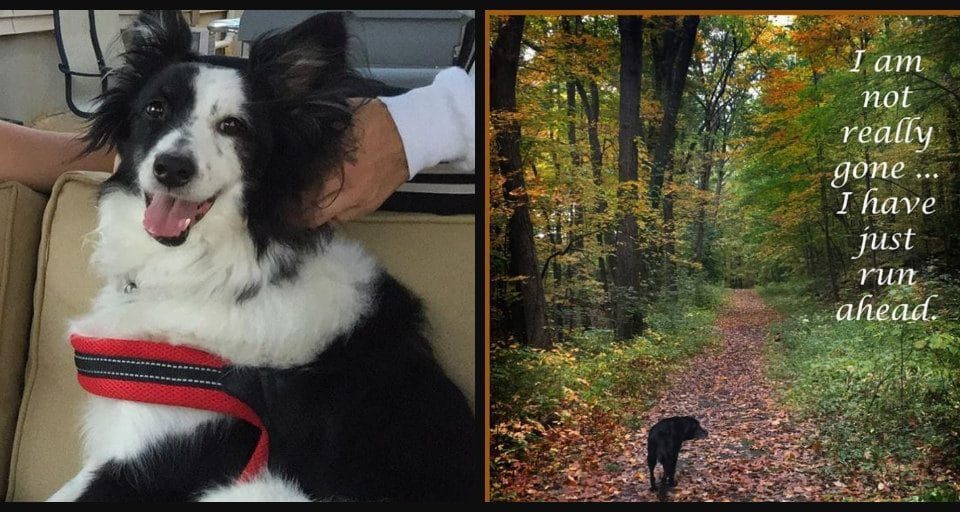 I was driving and I felt the eyes staring at me, almost burning into my skin. I looked over. My husband Roger was in the passenger seat holding our dog Oliver. Wrapped in a blanket, Oliver seemed so small and so far away, even though he was right there.

He was staring at me with such a sad lost look. Was this really happening? I knew it was Oliver’s last ride to the vet, or to any place for that matter. Oliver looked at me. “It’s time, Mom.” 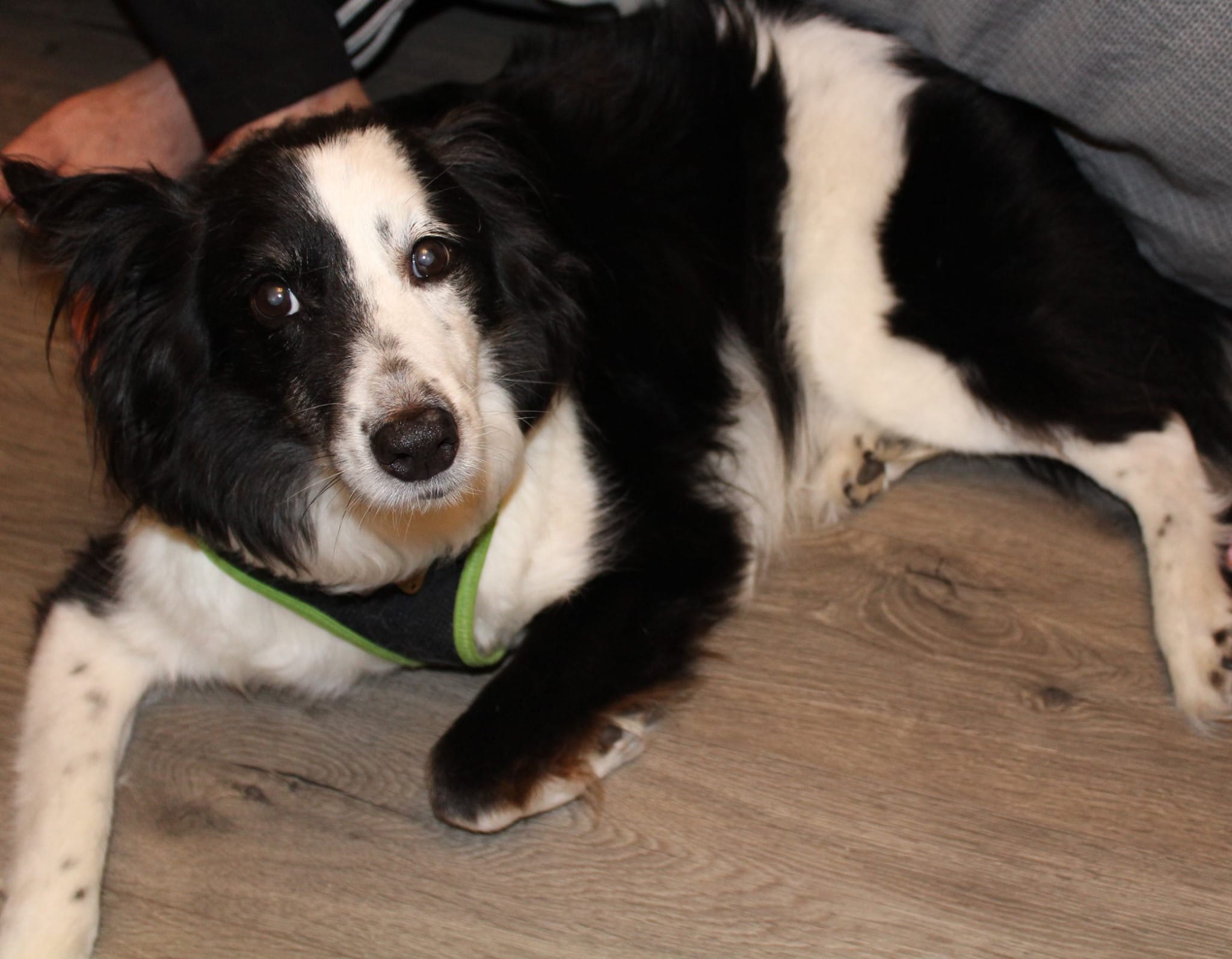 And as I write this, the tears are flowing as if it just happened. It was Oct. 20, 2019, when our beautiful rescued border collie died. It was not the first time we lost a companion animal, but it affected me differently. Here’s what I learned about his rare cancer, coping with the diagnosis, and saying goodbye.

It Came Out of the Blue

Roger and I have been involved in animal rescue work for about 17 years now. We’ve had a variety of our own rescue animals, from dogs and cats to a horse and a bunny. Over the years, we’ve lost many of them due to old age or illness. Before Oliver died, we had three remaining senior rescue dogs. 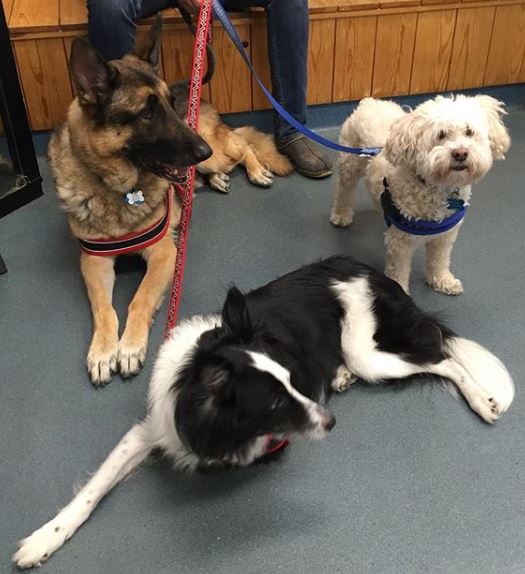 We’ve always kept up with vet visits and checkups, and whatever was needed for our animals. This past September, Oliver was due for a dental. Since he was around 12, he needed blood work and an EKG prior to going under anesthesia. Blood work showed Oliver’s liver enzymes were high so our vet, Dr. Paul, prescribed some meds for a couple of days before scheduling the dental. While Oliver was under, Dr. Paul took an X-ray.

It showed a baseball size tumor near Oliver’s liver. Dr. Paul consulted with us and said he believed it to be one of two cancers, one of which is hemangiosarcoma. We were referred to a specialist and made an appointment immediately. 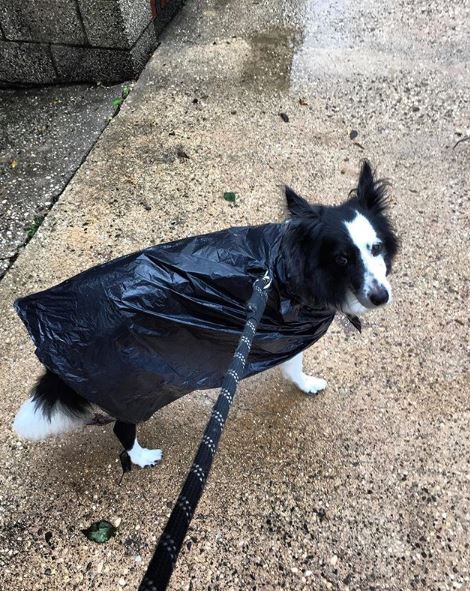 Oliver cried the entire ride to the hospital. It was as if he knew something we didn’t. The waiting room was packed with people and their beloved pets and lots of tension.

The surgeon we met took more X-rays and a sonogram showing a mass. He suggested removal because it could burst.

We knew we had to do whatever was necessary to fix Oliver. He was a former street dog who a neighbor found and had been part of our family for 10 years. 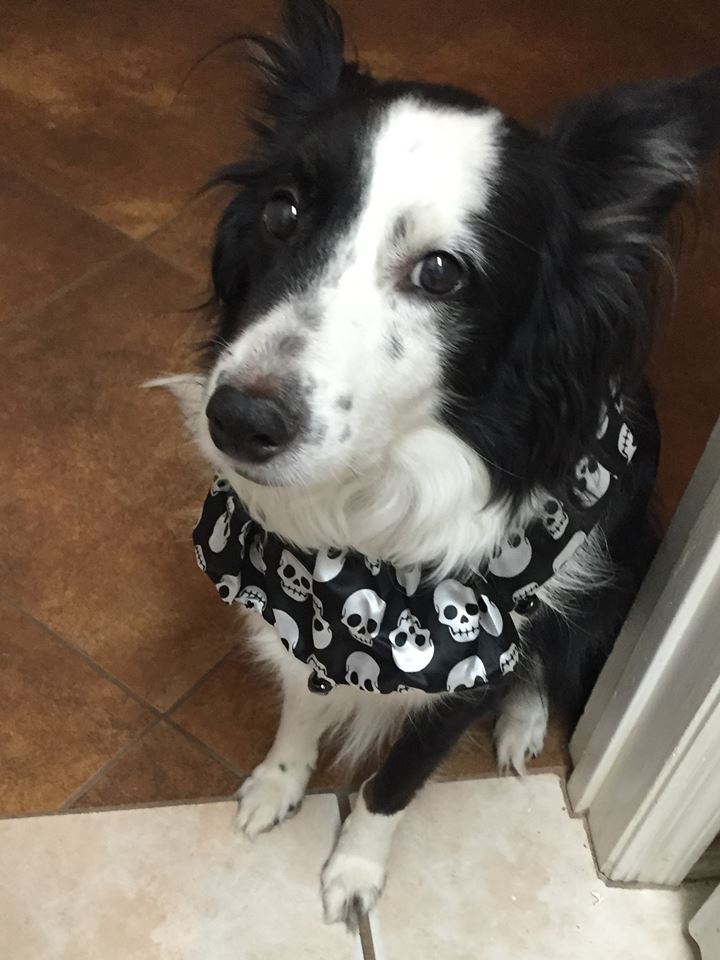 Oliver clung to my leg as the vet tech tried to take him away. I felt horrible as I had never seen him do that before. The vet tech had to pry him off me. We were told to go home and return later to visit.

By this time the knot in my stomach that began at the start of this nightmare continued to get worse.

We had not been home five minutes when the surgeon called.

The mass inside Oliver had spread just about everywhere and was vascular. They could not remove it for fear Oliver would have bled to death. Before sewing him up they took a biopsy. My poor boy was in ICU receiving a blood transfusion and fighting for his life.

We were told we could visit later that evening but only for five minutes. 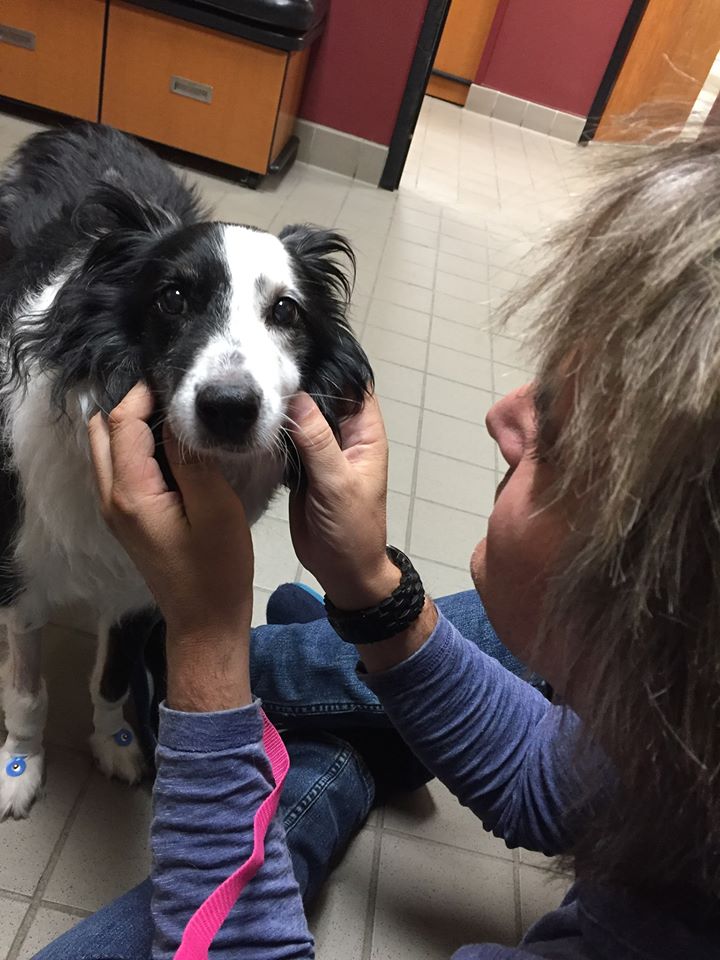 That evening, we arrived and waited for what seemed like forever until they called us in to see Oliver. They were firm: 5 minutes. Oliver looked so small and frail and so pathetic. It was touch and go, and his little body needed to accept the blood transfusion. 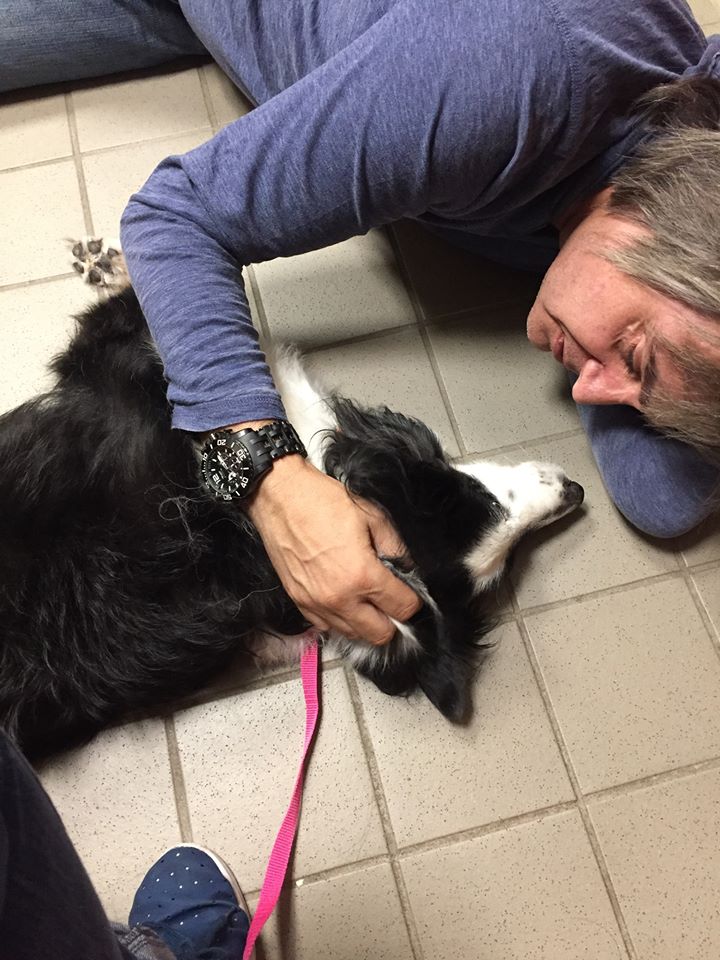 Throughout the night we called to check on Oliver. With each call, Oliver was pulling through.

The next day we were allowed to spend a half-hour with Oliver alone in a room. He had been through major surgery and although happy to see us, Oliver wasn’t Oliver.

On the third day, I received a call from one of the vets. The biopsy results confirmed that Oliver had hemangiosarcoma. In all my research and in speaking with all our vets, the prognosis was grave.

By the time hemangiosarcoma is found, it’s usually too late. There is basically no hope. Oliver was given a time frame of one to two months without chemo and maybe up to six months with it.

With chemo, he would have to continually return to the hospital, a place he feared, to receive a treatment that wasn’t going to “fix” him. Oliver was going to die from this. After weighing all the information and given Oliver’s age, we decided against the chemo. We didn’t want to put him through it.

If he was younger and there was hope, I would have given my right arm, my legs, my entire bank account, and shaved my head to keep him alive. But we didn’t get that option.

We finally brought Oliver home. Our biggest fear was that he would die at home alone while we were at work. I didn’t want Oliver to think we abandoned him or for him to suffer.

Thankfully, our nephew who had recently graduated college and lived around the block, was able to come by every day to check on him and the other dogs and report back to us. My boss even allowed me to work from home on Fridays.

I spoke to our vets so we could know what to expect. With each day, Oliver’s appetite got worse. We tried so many different foods to entice him to eat. Some days he would eat and some days he would barely look at the food. Roger even got on the floor with him. And I would kneel and beg him as I cried, “Please, just one bite.” 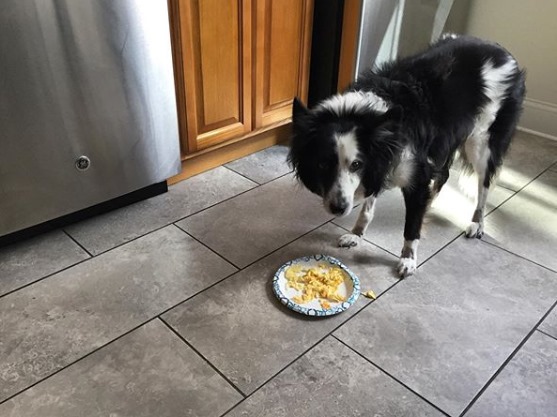 One day he would eat a little, then the next he would turn his nose at the food. And on and on. He would perk up for a couple of days, then back down again. About two weeks in, I walked Oliver, and for just a few minutes he seemed his old self. He barked at a neighbor’s dog and spun around in a circle as he used to do. For a second, I thought, “You’re back!”

That was the last time Oliver barked. 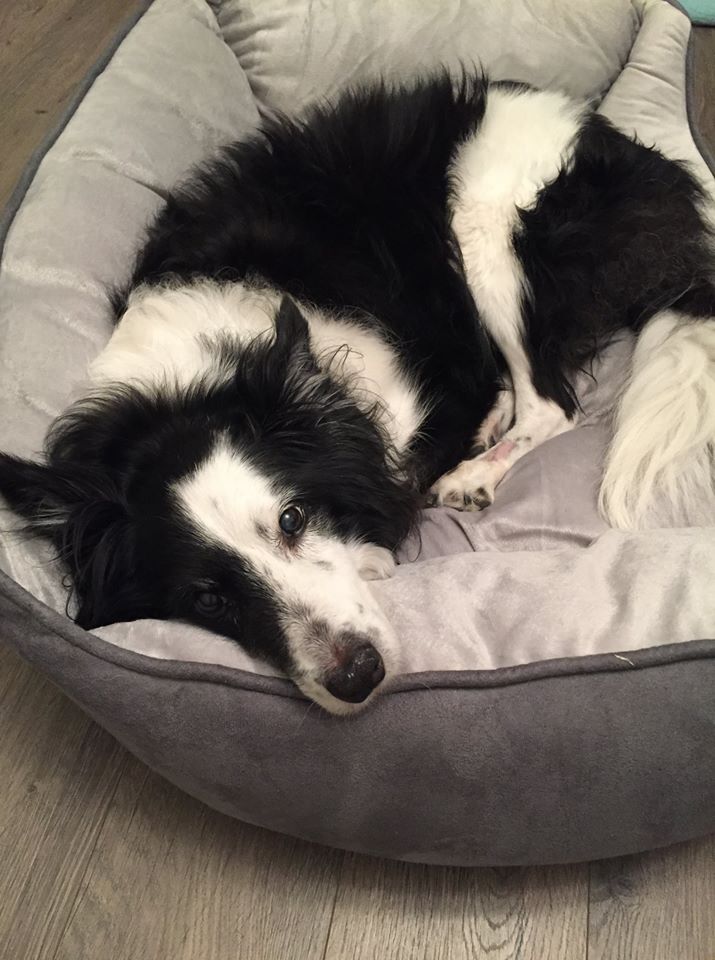 Toward the end of week five, Oliver stopped eating. It was Friday, Oct. 18. On Saturday, he started to wobble when he walked. On Sunday, the pit in my stomach was at its worst. At this point Oliver wouldn’t even get up to go potty. Roger had to carry him. Around 10 p.m. I felt Oliver’s paws and they were cold. His gums were stark white.

Roger called the vet who had given us his cell number. Dr. Paul feared that the tumors had burst. He said to meet him at his office. 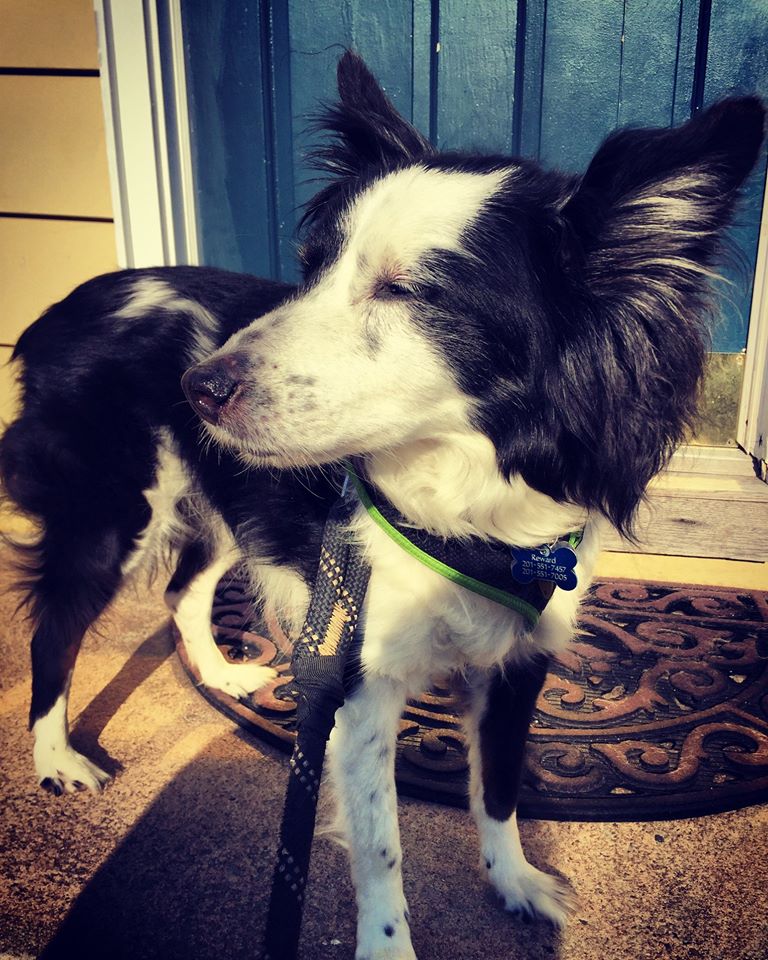 Roger carried Oliver inside where Dr. Paul was waiting. Roger placed Oliver on the exam table as Dr. Paul checked him. Oliver was leaving us. His breathing was very labored. It was that dreaded time.

I held onto Oliver so tight and told him how much I loved him. Over and over. Maybe if I squeezed hard enough it would reverse time. But it didn’t. Roger and I held him as he took his last breath. 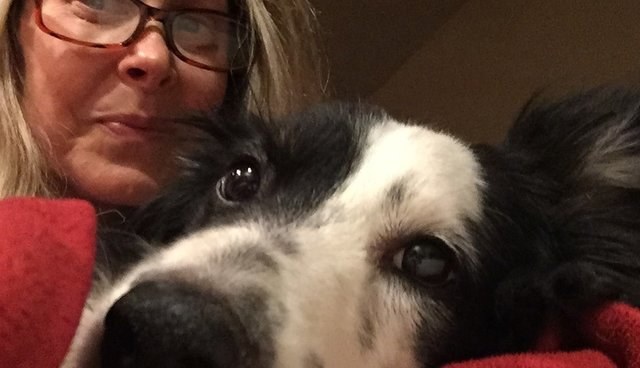 I asked Dr. Paul if he thought Oliver knew we were there and that we loved him.