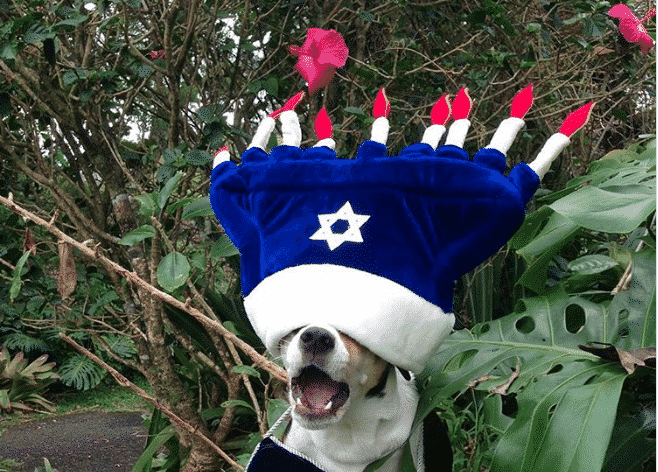 Happy Hanukkah! Let’s celebrate the Festival of Lights with these festive canines. They may not be able to wrap eight presents or spin a dreidel with finesse (darn opposable thumbs)—but they sure understand the spirit of the season.

The holidays are flying by

Turkey last week and Hanukkah this week…it’s all going so fast! ???? #countdowntochristmas

Long menorah for a long dog

Tonight is the 4th night of #Hannukah. Neither of Kuiper's people are very religious, but we both have Jewish heritage and enjoy celebrating some of the traditions, especially jelly donuts on Hannukah and dim sum on Christmas. ???? Did you know that the story of Hannukah does not appear in the Hebrew Bible? The books of First and Second Maccabees are "deuterocanonical." This means they are considered "officially" divinely inspired by the Catholic Church and Orthodox Christian churches but not by most Protestant denominations or by Judaism. The details of why are too complex to explain here, but even though they're not "canon", the books are still very historically important. ???? Hannukah is traditionally a very minor holiday, but the story behind it is interesting (although not a particularly happy one.) The typical narrative we are told is of the Maccabees fighting and overcoming their Greek oppressors. This story is technically true, but the reality is that there was also a long and bloody civil war that led up to the re-dedication of the Second Temple in Jerusalem, and continued afterwards. ???? The Maccabees demonized their fellow Jews who had abandoned their customs and adopted a Greek way of life. (They had been ordered to do so by the government under penalty of death, so their decision to assimilate was not entirely incomprehensible.) Although the Maccabees stood up for their beliefs, which is very admirable, they also pre-emptively attacked a bunch of their civilian countrymen, which is… less admirable. History is complicated, yo. ???? As for the history of the miracle of the oil lasting 8 days, it's not documented in the books of Maccabees and wasn't added to the Talmud til 600 years after the revolt. This addition may have been the first step towards re-branding the holiday into something less violent. In the US, the commercialization of the holiday began in the 50s, and really started ramping up towards the end of the 70s; Jimmy Carter was the first president to light a menorah. ???? I am 100% behind celebrating a light in the darkness, but I also think it's important to remember where we came from. ❤️ Which is your favorite night of Hannukah and why?

I love you a latke

Who turned out the lights?

A post shared by Millie The Greatest Dane (@milliethegreatestdane) on Dec 2, 2018 at 9:11am PST

Happy Hanukkah! Now when do I get my gifts..? #hannukah #hannukahdog #menorah

Hersch is listening to the dreidel rap

Rumor has it, she can also bark Adam Sandler’s “Chanukah Song.”

From all of us at Rover, have a very happy Hanukkah!