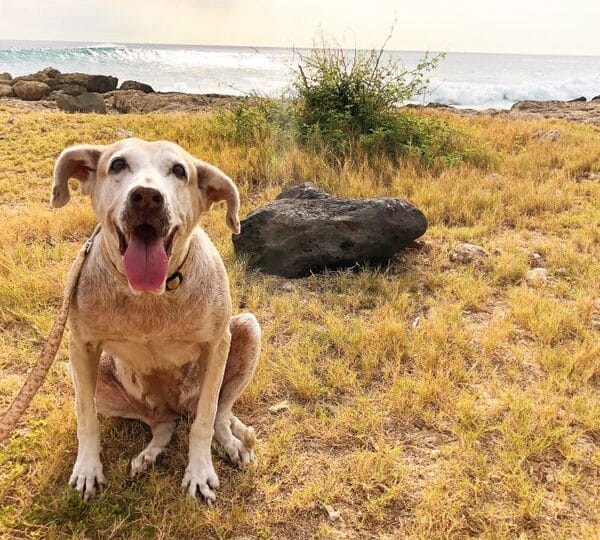 When Jennifer Hoyt showed up at the Oahu SPCA in Hawaii to meet a dog named Pirate, she was surprised at the reaction she got. The staff member who greeted Hoyt was shocked. “Nobody ever asks to meet Pirate,” she told Hoyt.

Nevertheless, the staff member was very excited that Hoyt wanted to meet the dog who had been passed over time and again and had been at the shelter for seven long years.

And it happened by chance that Hoyt found Pirate at all.

Hoyt, US Army, had recently been stationed in Hawaii and wanted to volunteer at a local shelter and keep busy until her finance Dennis Shaffer, also US Army, joined her months later. They knew eventually they’d adopt a dog, but the plan was that when Shaffer joined her and they got a house, they’d settle in and enjoy Hawaii first. 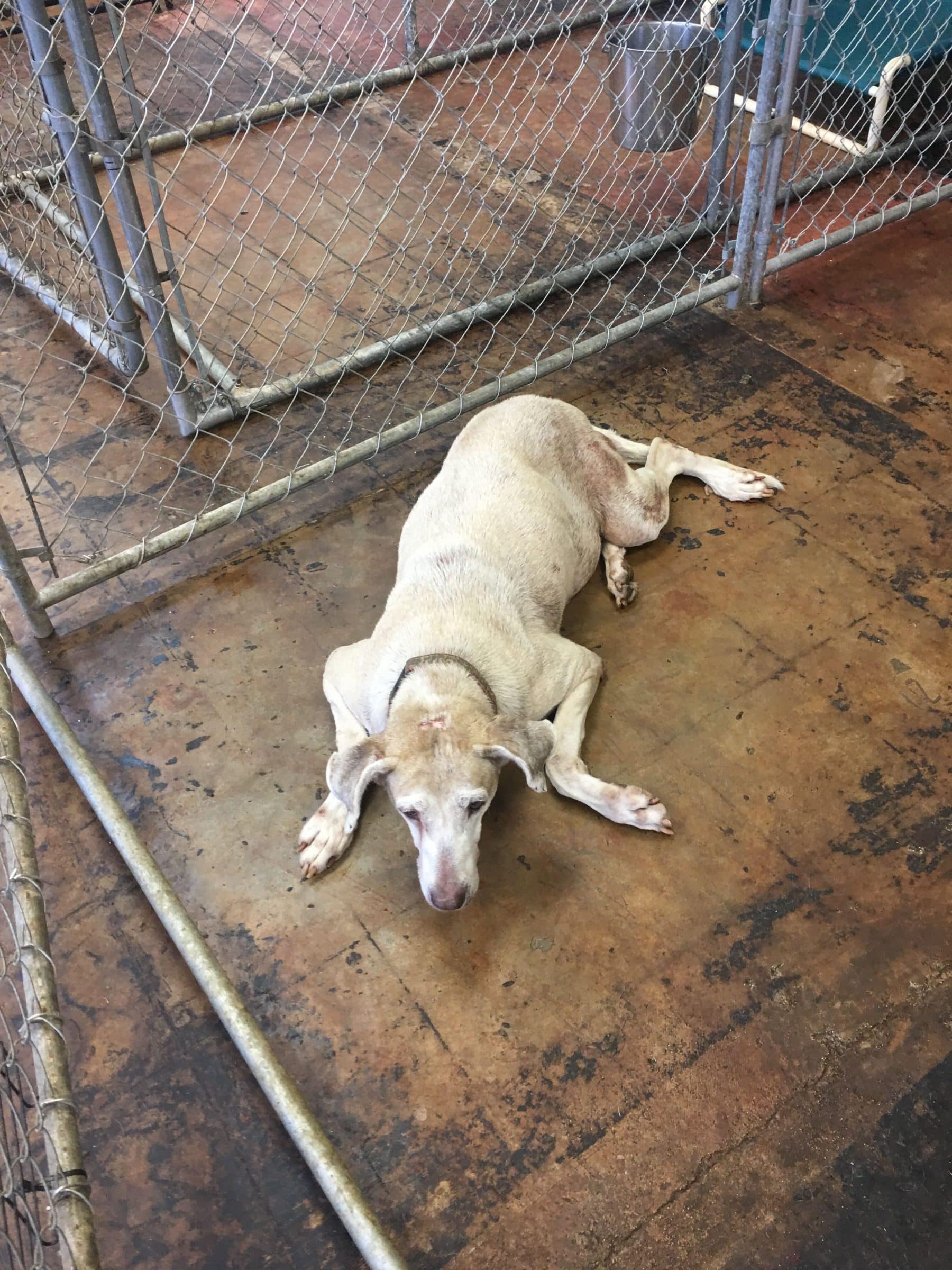 One night while FaceTiming with her fiance, Hoyt was also scrolling through photos on the animal shelter’s page. She spotted Pirate, an old, sad-looking dog with a yellow lei around her neck. There wasn’t that much information, only that she was available for adoption. After finding the organization’s Instagram page, Hoyt scrolled backward. She kept seeing Pirate and put two and two together. The dog had been there for seven years!

“I started crying and said, ‘Dennis, I need to tell you about this dog,’” Hoyt said. She screenshotted the photo of Pirate and sent it to Shaffer. The couple agreed that Hoyt would meet Pirate before they made any decisions.

The Dog Nobody Asked For

That next day at the shelter, when Hoyt was brought to Pirate’s kennel, Hoyt found out that the dog had originally entered the shelter as a stray. Staff thought the emaciated, unhealthy dog they took in was probably used for breeding and then abandoned.

They put Pirate on a leash. Hoyt brought her outside and Pirate started eating grass. “She didn’t look at me; she didn’t look at anything,” Hoyt said. “She was emotionally detached. That broke my heart.” 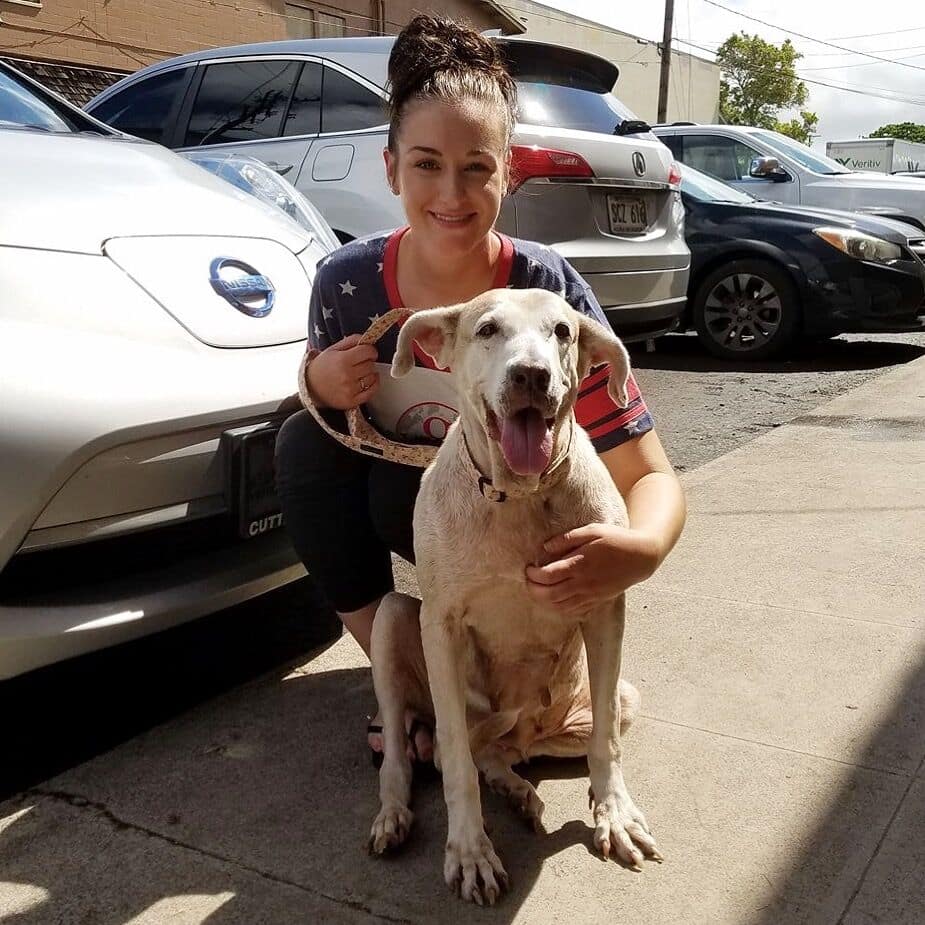 Hoyt was told that Pirate had hip problems, that she didn’t like her tail, feet, or hind end touched, and that people had to be careful handling her. She wasn’t good around kids or other dogs and would have to be an only dog.

Pirate didn’t look healthy and one eye was draining down her face. She was missing spots of fur on her chest and her back leg. She had open hot spots, to boot.

“She wasn’t a pretty dog at all,” Hoyt said. “They told me it was as if she was giving up on life. I wanted to cry.”

Pirate was about 11 and sleeping on the kennel’s standard metal and hard rubber bed with her bad hips. It was all she had.

Hoyt told Shaffer she was going to buy Pirate a new bed and a toy, which she did that night and brought back the next day.

“When I gave her the bed she sniffed around, came over and looked at me, and let me pet her as if she was saying thank you and that’s what started our bond,” Hoyt remembered.

Although Hoyt was told Pirate didn’t like toys, she eventually played with and now loves toys.

Ever since that day, there was an unspoken agreement between Hoyt and Shaffer that they would eventually adopt Pirate. “I know he knew I wanted her,” she said. Even though it wasn’t official at the time, Hoyt wanted to spend as much time with Pirate as she could. She sent Shaffer videos and photos.

Visiting Pirate became an everyday thing. “I 100 percent looked forward to seeing her every day,” Hoyt said. “I started to feel guilty if I went to the beach with a friend and felt guilty that Pirate was locked up in a kennel.” 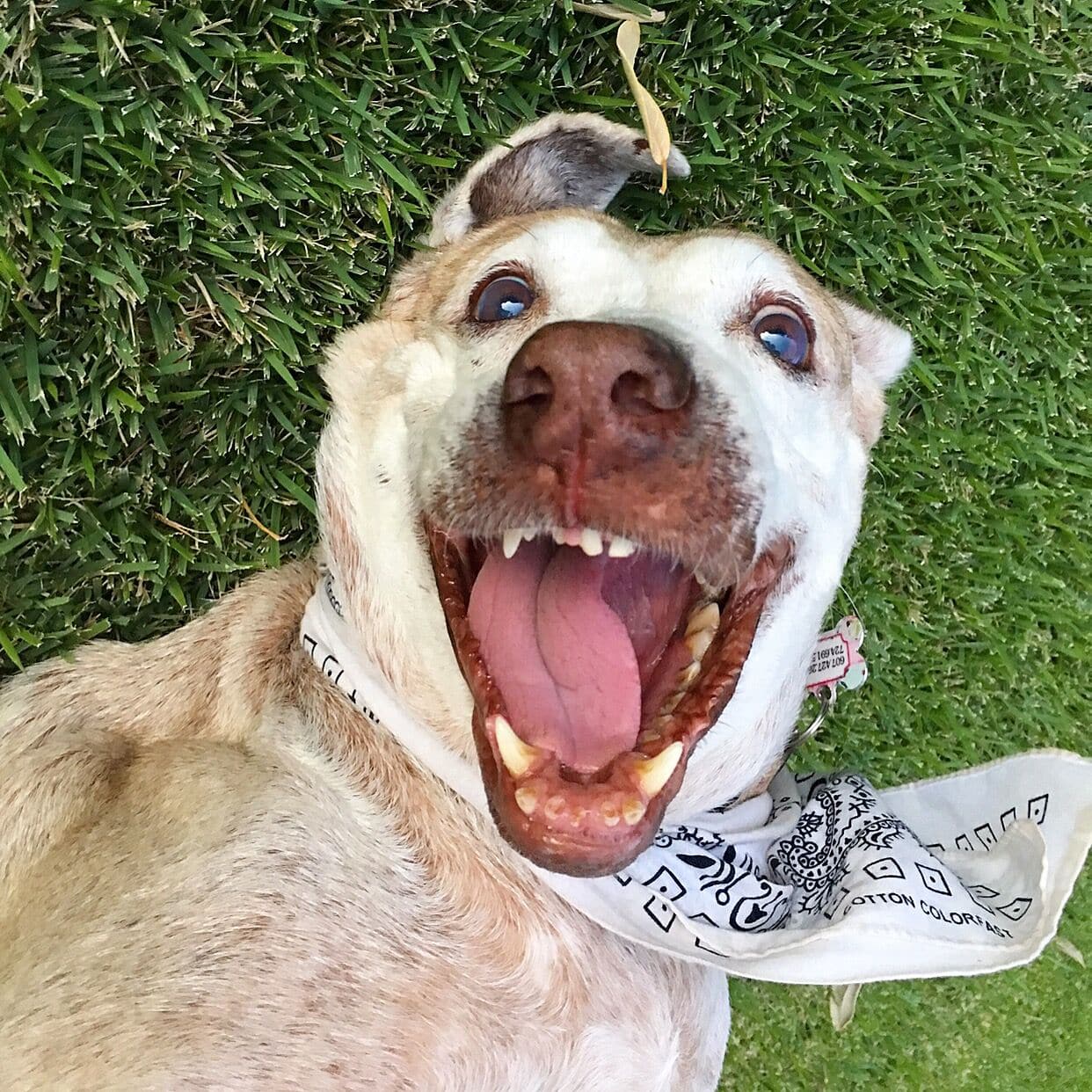 Hoyt received permission to take Pirate out to the park or to the beach. Or she would just sit in Pirate’s kennel and pet her while she slept. There were days that she sat with Pirate for eight hours. If she couldn’t get to the kennel before closing, she’d spend weekends there.

Kennel staff told Hoyt that Pirate had food aggression issues so they just pushed her kennel door open to slide in her bowl then shut the door. Slowly over time, they allowed Hoyt to feed Pirate. And as Hoyt gained more of Pirate’s trust, she was eventually able to touch the dog’s hind end and tail.

The day finally came to adopt Pirate, who is now Pirate Marie, because everyone needs a middle name.

It was July 13, 2017, and Shaffer was due home in August. Hoyt got their house ready and helped Pirate Marie settle in as they both adjusted. 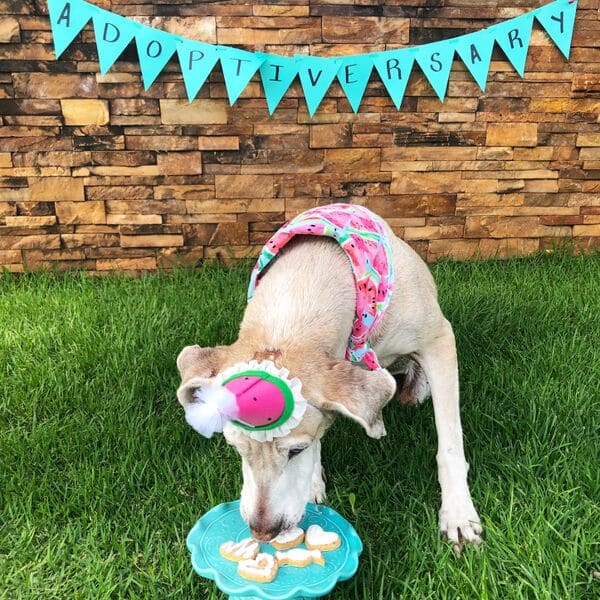 But it wasn’t an easy introduction. Pirate was very uneasy with Hoyt’s fiance, who was in turn, uncomfortable with Pirate. This put Hoyt in a difficult situation.

Pirate seemed to have issues with someone being in her space, and she was very protective over Hoyt.

“There was so much tension,” Hoyt said. “It was like, ‘Who is this and why is he in my house?’ She was so on edge. He was on edge because she was. It was over a month before they warmed up to each other.”

But they did. Shaffer now absolutely loves Pirate.

Pirate has a funny and quirky personality. She can act old and grouchy but also act like a puppy. She lets Shaffer give her a bath outside without trouble, but she’ll give Hoyt a run for her money, making Hoyt chase her around the yard while pushing her buttons. 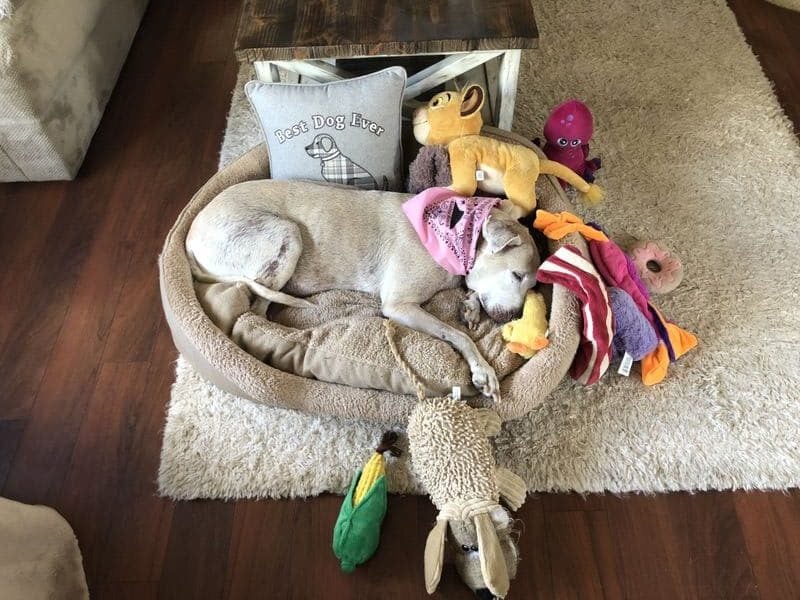 She loves food and is very food-motivated. There have been times when the family will go to the park but Pirate just doesn’t want to walk anymore.

“We have to hold a treat and make her follow it,” Hoyt laughed. “When we’ve run out of treats there were times that Dennis had to carry her on a walk. She’s very stubborn.”

Hoyt is happy that Pirate can just be a dog. “I think now she can relax and do what an old dog is supposed to do: enjoy life and not have to worry about finding a family while sleeping on a hard bed,” she said. “That and when we come home she literally smiles; she literally shows her teeth. Seeing her that happy to see us is the most amazing thing. 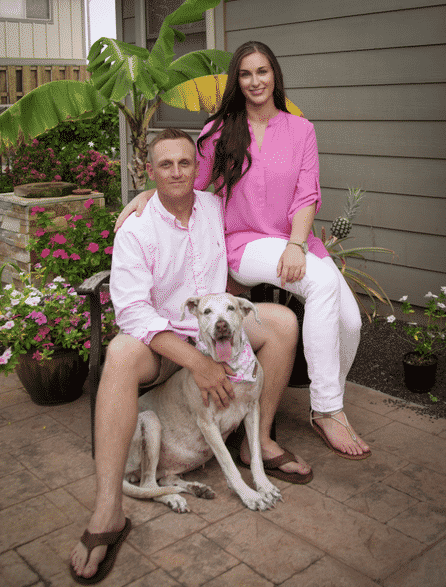 “I’ve always loved animals and knew I loved her from the beginning. I unconditionally love her. We have a Pet Cam and sometimes I’ll watch her at work because I miss her.”

Hoyt said that Shaffer has learned patience from Pirate. And Hoyt feels like she has a purpose. “My purpose is to be her mom,” she said.

Check out a video on Pirate Marie from The Dodo: