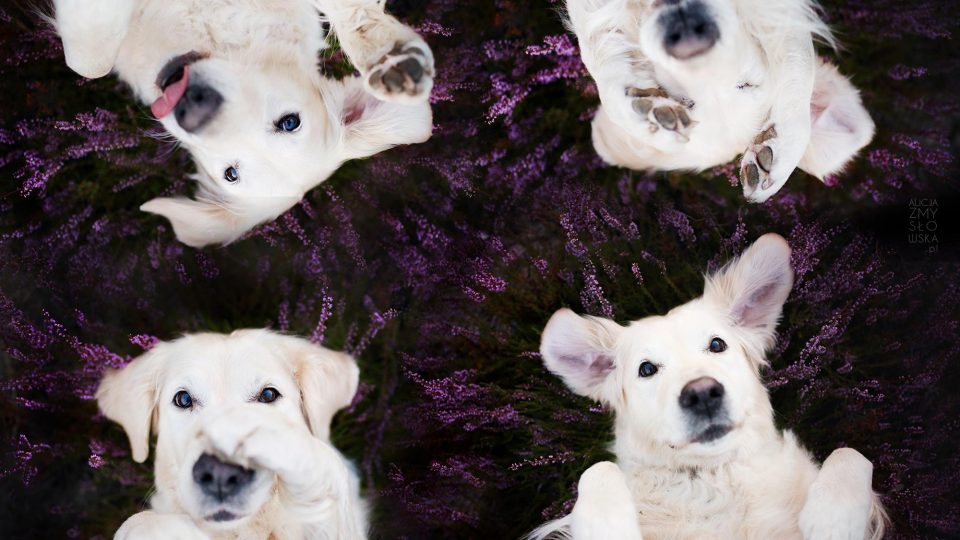 Think about the naughtiest thing your dog ever did. For me, it’s the time my dog Ralph got into the kitchen cupboard while I was out and tossed a bag of flour all over the house. I was frustrated when I came home to a find flour ground into the carpet, but then Ralph looked up at me with those big, round eyes, flour dusting her adorable nose, her sweet, soft ears flopping over as she tilted her head…how could I stay mad at a face like that?

Cuteness. It’s what makes us squee over puppy pics and rush to forgive our pets for the occasional naughty misstep. But why are dogs so cute? What is it about man’s best friend that turns even the toughest tough guy into a babytalking fool every time his dog rolls over for a belly rub? It turns out the science of cute is fascinating stuff. 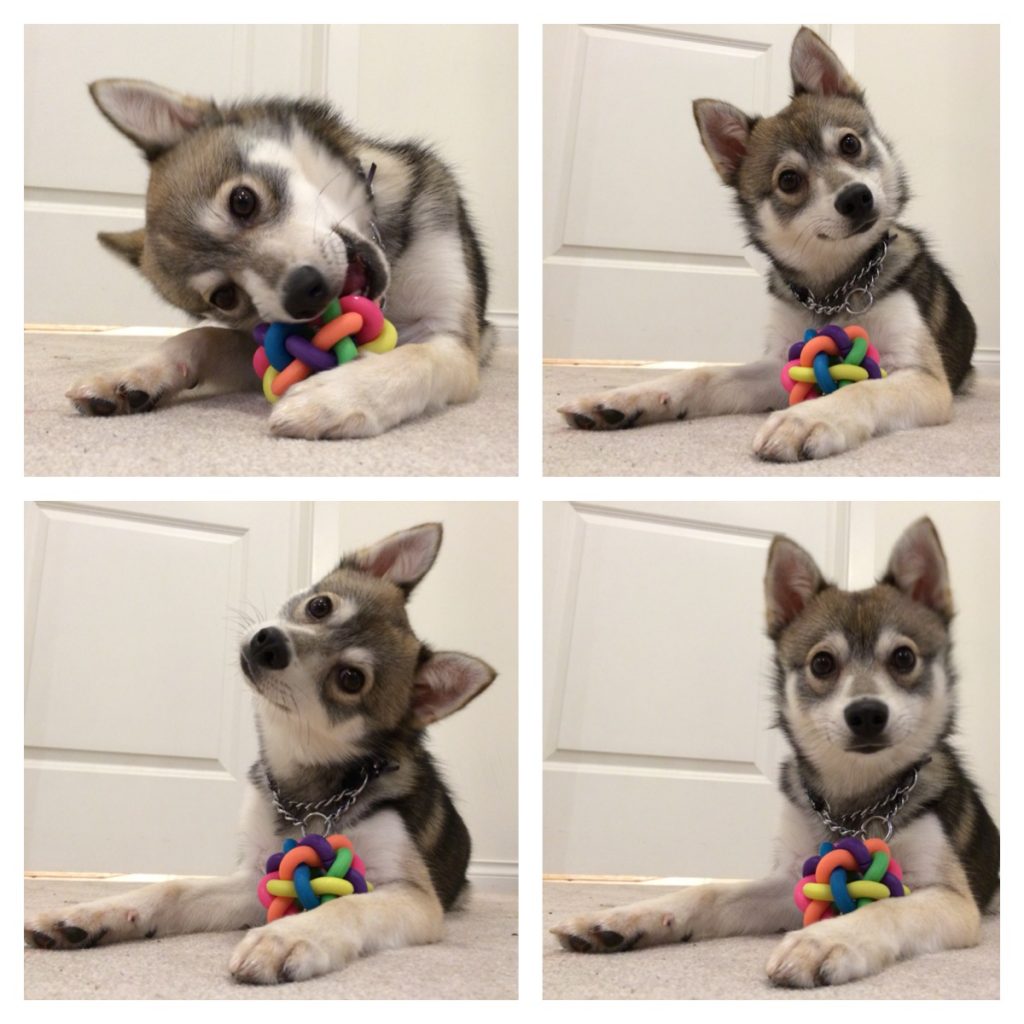 What Makes a Dog Cute

To answer the question, “Why are dogs so cute?” we have to start by identifying what cuteness looks like.

Of course, we can all name cuteness when we see it (our own beloved pets being the cutest things in the whole wide world, of course). But there’s actually a recognized list of characteristics that determine “cute,” all fitting under the German word kinderschema, or baby schema (source).

Here’s a breakdown of what makes your dog cute: 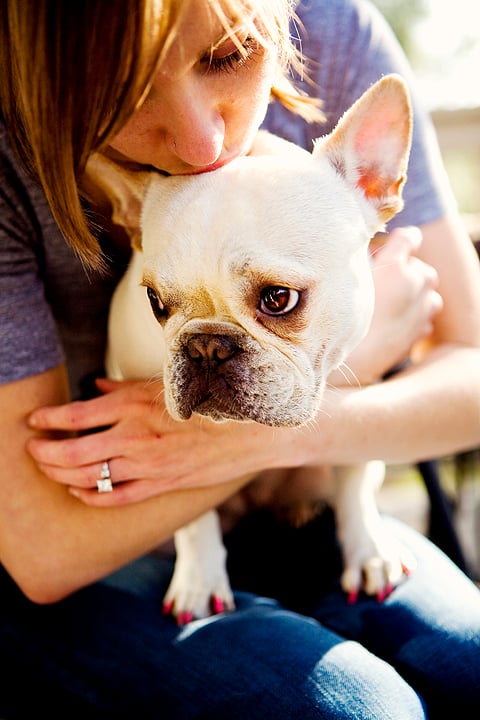 For an example of cute science in action, look no further than the French bulldog. These unbearably squee-worthy smushballs check all the boxes on the cuteness cue list: pudgy features; loose skin that bunches in adorable rolls; round eyes; round ears; a wide, staggering gait; and that cute little smush nose.

It’s no wonder Frenchies are quickly rising in the ranks of most popular dog breeds in America. They’re cuteness personified—or caninified, if you will.

Even without a handy list of cuteness cues, most of us have an innate sense of what’s cute and what’s not. You look at a sweet, fluffy dog and you just know: that thing is cute. Or you might look at a snake and think: so not cute. Where the science of cute gets really interesting is when we start to consider why certain features tickle our squee response. It’s no accident that every cuteness cue is intrinsically tied to youthfulness and even helplessness. 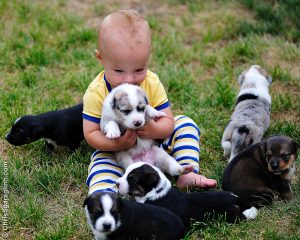 It all goes back to human babies. As explained by Natalie Angier in the New York Times, the features of cuteness are those that express “extreme youth, vulnerability, harmlessness and need,” and those features elicit a nurturing response. In other words, stuff that reminds us of small, defenseless babies will trigger warm feelings that make us want to take care of whatever made us go “awww.”

The thing is, our brain doesn’t automatically know the difference between “human baby” and “vulnerable creature from another species.” If you look at a picture of a puppy and a baby, you’re going to feel the same warm, fuzzy feelings for both.

Our affinity for cute is an evolved biological response. Think about it: If we didn’t get all gooey over cute things, we wouldn’t take care of them and protect them, and our own species wouldn’t survive. We respond to cute cues because it’s in our very nature to nurture, whether our charge is our own offspring or our beloved, adorable dog.

How Dogs Got So Cute

Wait a minute, you might be thinking, my dog isn’t helpless. Sometimes I think she’s smarter than me! It’s true, possessing the features of kinderschema doesn’t automatically mean a dog is weak or helpless. Some studies have sought to prove that dogs evolved to be cuter as they became domesticated in order to make people want to take care of them. 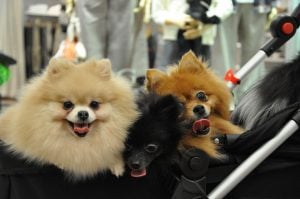 It makes sense, doesn’t it, that dogs would become increasingly cute as they became increasingly dependent on human beings to survive? A reported by the Huffington Post, one UK research team found that shelter dogs who “actively raised their inner brow and widened their eyes” were adopted faster. Raised brow, wide eyes…sounds like a cute cue to me! The study theorized that “dogs’ facial movements have evolved in response to a human preference for child-like characteristics,” meaning the cuter the dog, the more willing the human will be to look after it.

These studies are still relatively new, with small sample sizes, so we can’t say for sure that you are compelled by cuteness to look after your dog. But I have to admit, when I come home from work to find an overturned trash can and a dog looking up at me with those big, round, I-didn’t-mean-to-do-it-I-swear eyes, it’s easy to make the leap.

Cuteness Is In the Eye of the Beholder 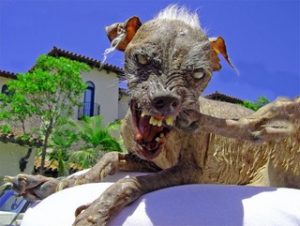 Of course, plenty of us love dogs who aren’t conventionally cute. Just look at the World’s Ugliest Dog Contest! Even “ugly” dogs elicit a caregiving response from their human caretakers, possibly because, despite their less conventionally attractive features, they’re just so vulnerable.

In addition, some people have different cuteness cues than others; it explains why some of us favor squat bully breeds and others go for long-legged hounds. I’m conjecturing here, but given our brain’s response to “cute cues” and our innate need to nurture, it seems possible that cuteness isn’t just a list of attributes. Cuteness is a state of being.

What’s the cutest thing about your dog? Let us know in the comments.