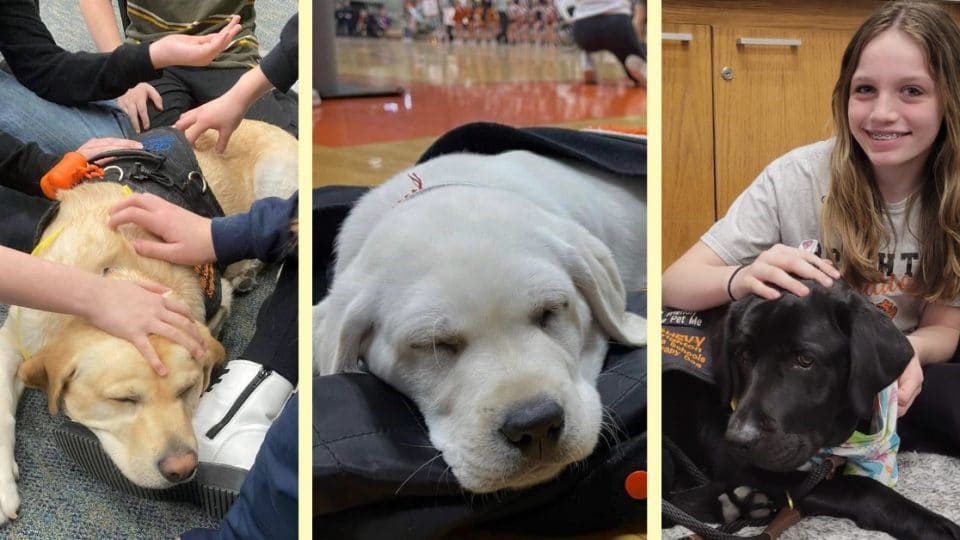 A day that started like any other would change the trajectory of Karen Storey’s life and the lives of so many others forever.

When a service dog named Ivan escorted a teacher with Parkinson’s disease to the Michigan school where Storey works as a special education teacher, she noticed how many students were captivated by the teacher’s canine assistant.

Even though Ivan was working and not allowed to interact with the kids, Storey could see that the kids had a spontaneous connection with the dog. Storey, who is also the Multi-Tiered System of Supports (MTSS) facilitator for the Brighton Area School (BAS) District, knows first-hand how important it is to support kids from a multitude of angles.

“At that moment, I knew I had to find a way to get a dog into our school,” Storey said.

Storey approached the district’s superintendent, Dr. Greg Gray, with the idea to develop a dog-centric emotional support system throughout the schools. Storey was immediately given the green light, and as a result, Brighton became the first public school district in Michigan with its very own pack of emotional therapy dogs—the BAS Pack of Social Emotional Learning Dogs. 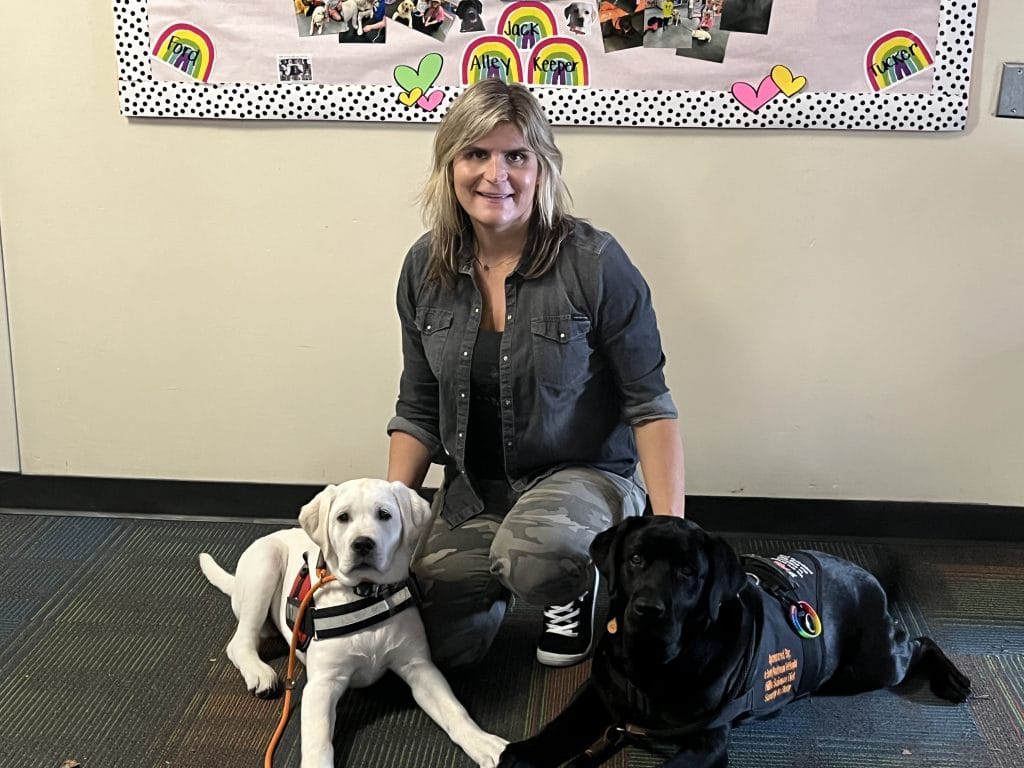 Leader of the pack: BAS Pack of Dogs founder Karen Storey with Bronx (left) and Chevy. Courtesy of Karen Storey

The program started to take shape back in 2006 with Caesar, a black Lab, who was the first dog to pilot the program. Caesar retired in 2019, and passed away in 2021, having helped countless kids and paving the way for all the dogs who would come after him.

A total of 16 dogs have served in the school district since the program was formed, and now there is at least one dedicated dog at each of the nine schools in the area.

Alley, Keeper, and Jack hang out at the high school and Martha is at the alternative high school. The middle school’s dogs’ names are Ford and Tucker, and Duncan shows Hope the ropes at the intermediate school. In addition, Scout, Buckley, Oliver, and Shadow spend their days with elementary school kiddos, and Henry helps at the Senior Center/Tot Spot. Chevy travels between buildings visiting wherever kids need him most. The newest addition to the pack is Bronx, an adorable yellow Lab therapy puppy-in-training who will one day join Chevy traveling between buildings. 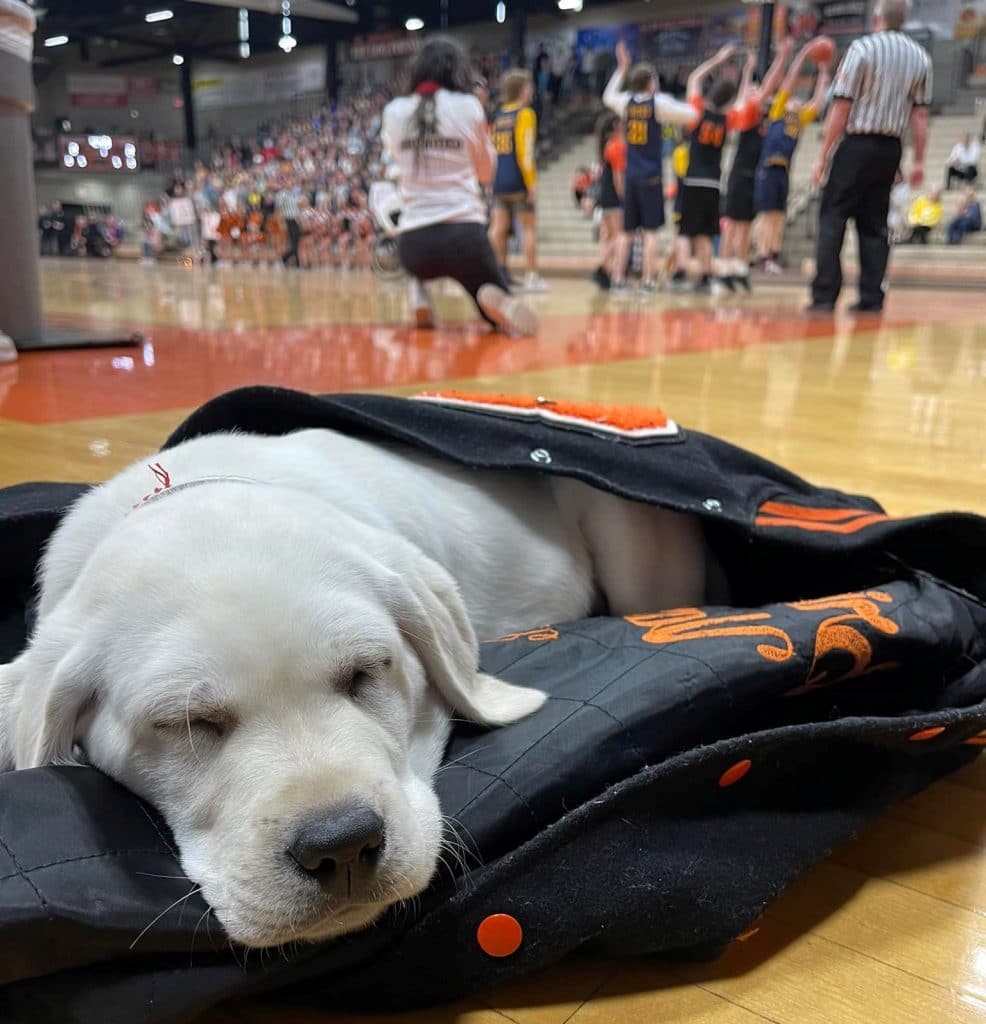 Bronx is a sleepy puppy after cheering on some of his favorite players. Courtesy of Karen Storey

New dogs join the pack at 8 weeks of age and are trained by a local therapy dog training nonprofit for the next year in preparation for the big job they will one day have.

While Labrador Retrievers, known for being intelligent, gentle dogs, were the first BAS dogs, other gentle, well-trained breeds (such as Henry, an Australian Shepherd, and Tucker, a mini Goldendoodle) have joined the pack.

In addition to providing friendship to kids during the school day, the dogs participate in community and extracurricular activities, such as walking in the homecoming parade, cheering on school athletes during games, and attending charitable events for causes fighting multiple sclerosis, Alzheimer’s, and breast cancer. (Duncan, below, has even raced with his handler for Special Olympics of Michigan and Ainsley’s Angels.) 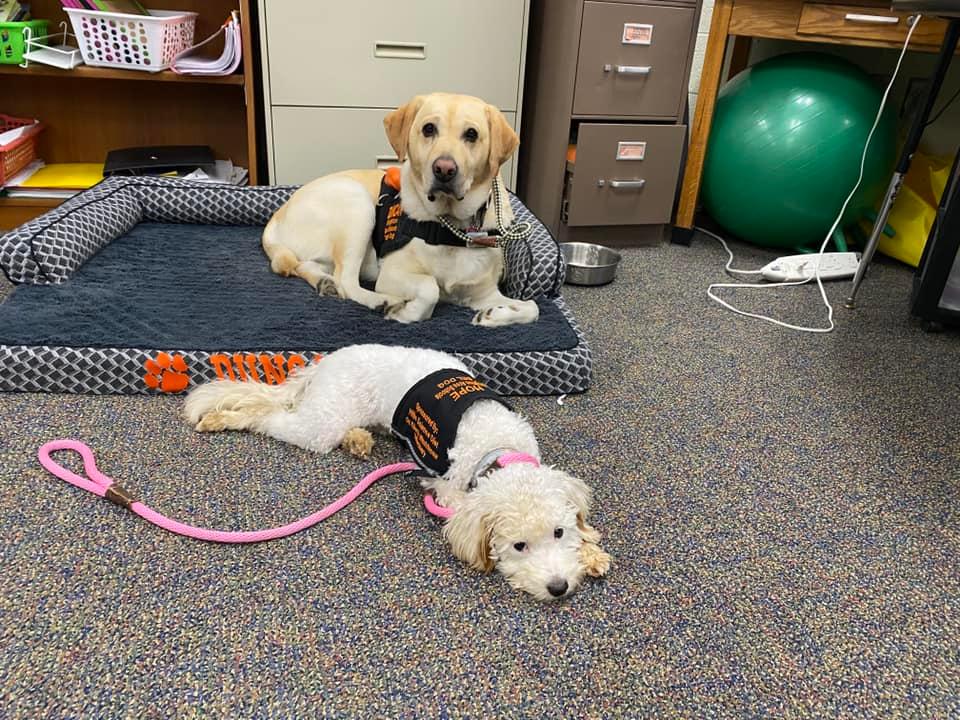 Duncan says, “Hey Hope! There’s room up here for you too!” Courtesy of Karen Storey

Dogs for the Most Difficult Days

Although the dogs have many jobs, the most meaningful is helping students with their feelings. The dogs help kids who are struggling in ways that need no words. They instinctively stay near kids who are having a tough time though everyone is welcome to spend time with them. And no job is too big for the pack.

In 2018, Duncan, a yellow Lab and the second dog to join the pack, was called on to help students cope with a traumatic event—the death of a classmate and fellow band member. Duncan spent the rest of the school year in the band room just being there and supporting the boy’s friends.

More recently, in the wake of a school shooting in a neighboring community, the dogs spent 10 days at nearby Oxford Middle School helping students feel a little less frightened about returning to school. Now, there’s an online campaign for Oxford Community Schools to start its own therapy dog program.

The benefits of dogs in schools is so easy to see, Storey says, that districts from all over the country have approached her for help. Storey has even launched a nonprofit organization, 4 Pawz Strong, to help other schools establish their own therapy dog programs. 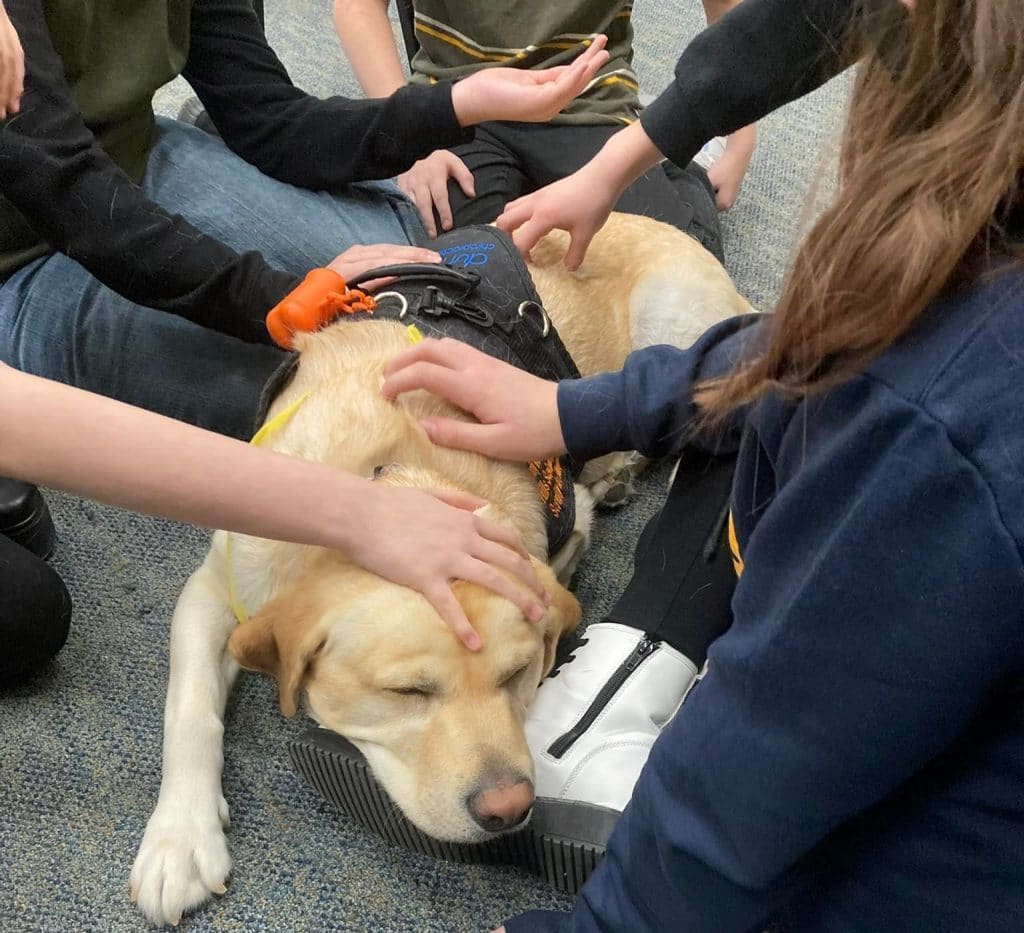 A Support System Away From Home

The comfort and connection the dogs provide students is evident from the moment the dogs arrive at school in the morning.

Mornings can be tough as kids transition from being at home to being at school. But when Duncan arrives with his handler, two of Duncan’s special friends, Piper and Shelby, come in before going to class to make sure he is ready for the day. They make sure he has fresh water and food, that he’s enjoyed his morning walk, and that he has everything he needs to start the day off on the right paw.

As a result of their time with the dogs, Piper and Shelby are happier to come to school and have even become friends.

Shelby explains, “I was having problems with anxiety and the dogs helped me to make a dog friend and a human friend.” Piper was very anxious and full of dread every day before school. The dogs have helped her cope, and now whenever she feels sad or anxious she spends time with them until she feels better. She said, “I was not wanting to come to school and the dogs gave me a reason to want to go.” 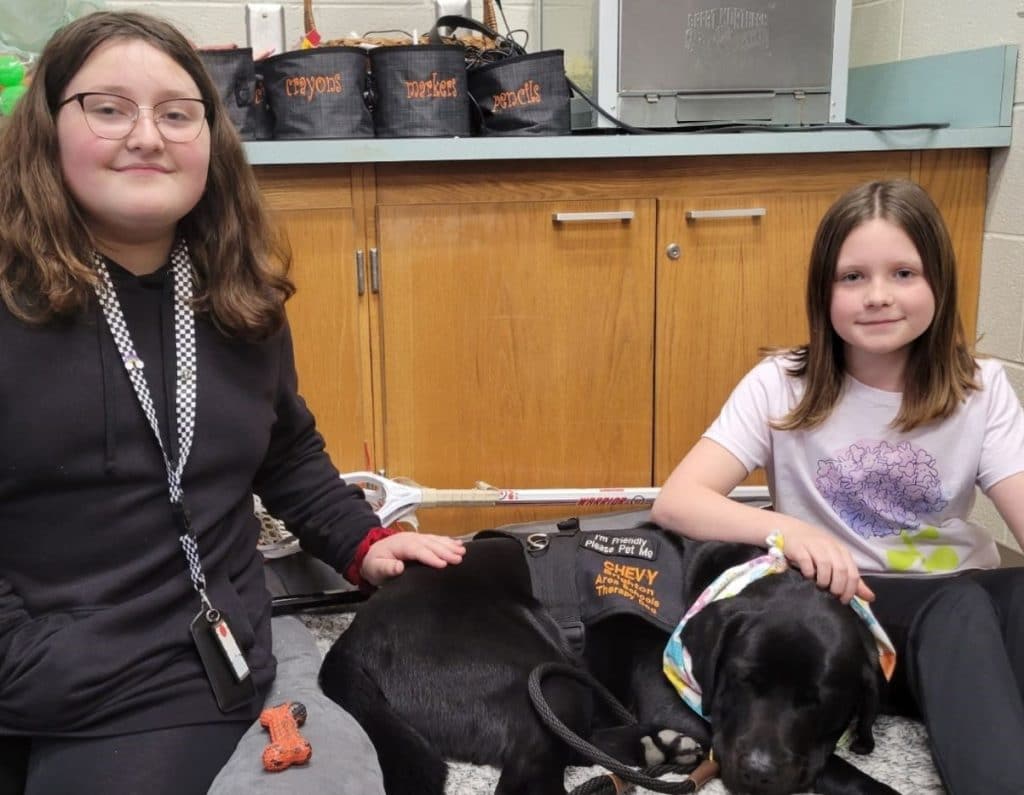 Good friends Shelby and Piper love to visit with dogs like Duncan, and Chevy, pictured here. Courtesy of Karen Storey

Studies show that dogs can help kids with difficult emotions including depression and anxiety. But Storey says the dogs help the kids with even more.

“The biggest thing is connections,” Storey says. “Kids who may never talk to each other have an instant connection when the dog is there. They may talk about their own dog at home, or share a story about a dog they saw on a walk, or even open up about something personal.” 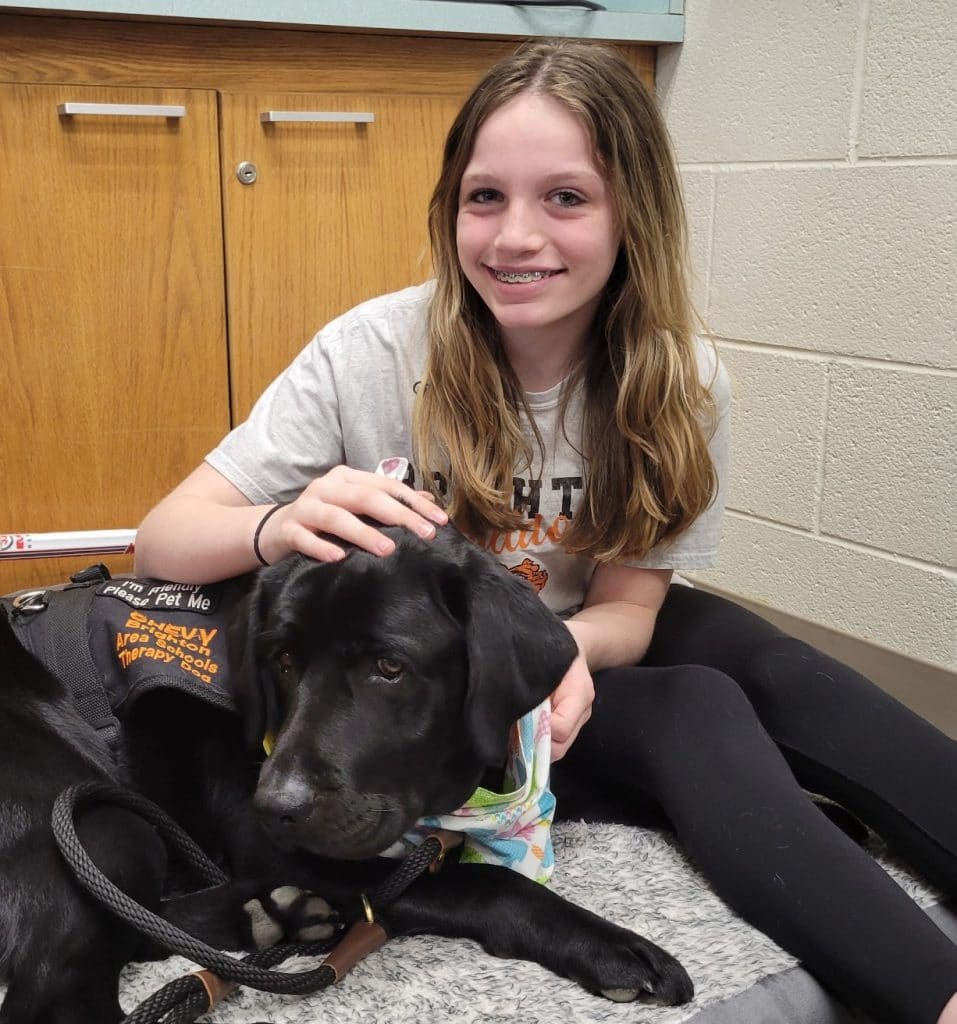 One 6th grader named Mia opened up about how much the dogs have helped her. She experienced a devastating tragedy in her life and the dogs are her support system away from home. “Whenever I’m feeling down the dogs will sit in my lap and snuggle with me,” she said.

The dogs absorb all that is around them and are exhausted by the end of the school day, around 3:30 p.m.

After a long day, the dogs go home with their handlers to spend their evenings as family pets. The handlers are teachers, paraprofessionals, and administrators who also provide loving homes for the dogs. Sponsors donate all the veterinary care, food, and supplies so the host families do not take on any expenses associated with the program and can focus on creating an exceptional home environment for these deserving pups. 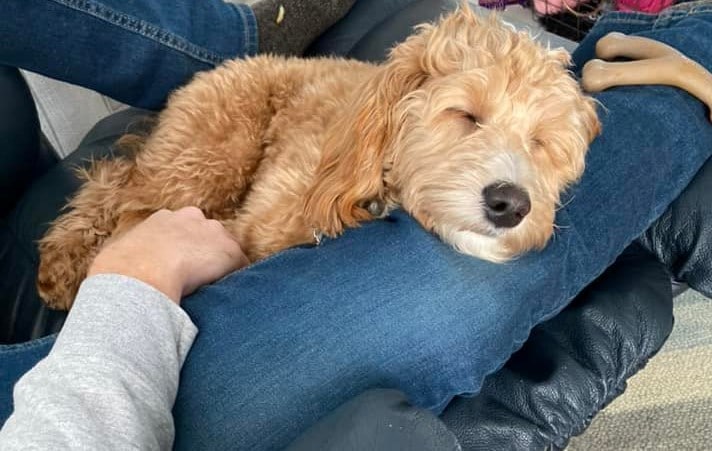 Tucker is all tuckered out by the end of the day. Courtesy of Karen Storey

Being a youngster is difficult in a world that can be confusing and painful.

But when one of your classmates is a dog, there will always be a furry friend nearby who won’t care about things like social media or popularity. They’ll just be there to be a buddy, to foster emotional connection, and to provide unconditional love.

It’s something Storey has seen again and again. “The moment the dogs walk into the room, kids just feel better. They can help turn around a very bad day just by being there.”

Melissa Sanger is a Licensed Veterinary Technician (LVT), copy editor, writer, and mom of three daughters. She has spent her life advocating for animals and the people who care for them, and has three rescue dogs, two cats, and a delightful starling. In her spare time, she loves creating healthy vegetarian recipes. 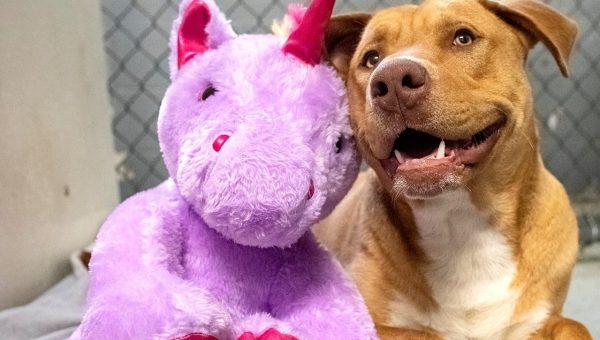 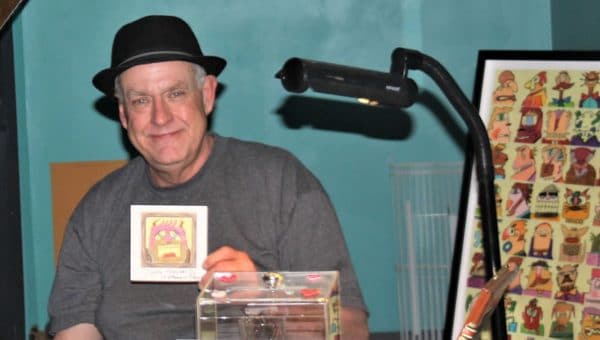 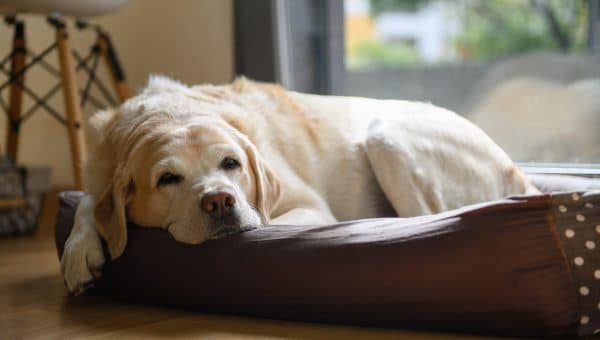