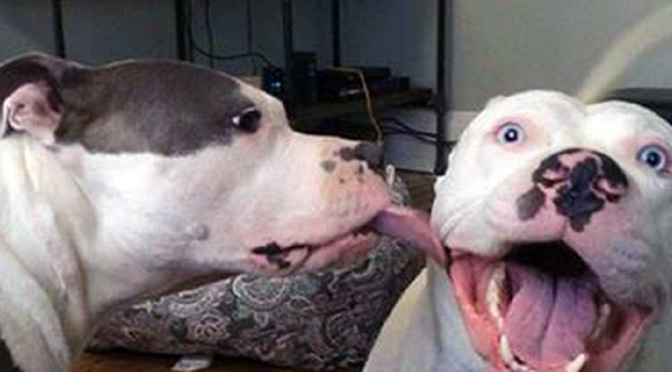 In 2005, the province of Ontario, Canada, home to Toronto, enacted the Dog Owner’s Liability Act, which bans the ownership of pit bulls, Staffordshire bull terriers, American Staffordshire terriers, American pit bull terriers, and “a[ny] dog that has an appearance and physical characteristics that are substantially similar [to those breeds.]” The idea was to reduce dog bite incidents; this type of breed-specific legislation assumes that certain breeds, like the pit bull, are to blame for such incidents.

In Toronto, the region’s capital, opinions were sharply divided on whether a breed ban was going to solve their soaring dog bite problem. Spoiler alert: it didn’t.

Pit bull ban
6. Except as permitted by this Act or the regulations, no person shall,

Existing pit bulls had to adhere to strict management, including mandatory neutering, muzzles, and shorter leashes. Failure to comply resulted in up to six months imprisonment and a $10,000 fine. According to records, the registered pit bull population has shrunk 80% since the ban, to less than 500 dogs in the province and less than 200 in the city of Toronto. And yet, dog bites haven’t gone down.

Dog Bites Are Up, Bully Breeds Are Down 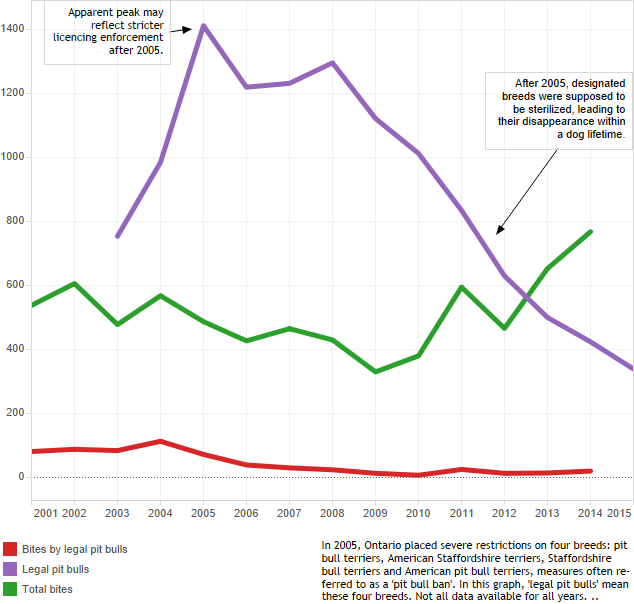 As the chart shows, reported dog bites in the city of Toronto are higher now than before the ban, while the pit bull population has been on a downward spiral since 2005.

Hard to Enforce and Measure

It’s not only ineffective, but hard to enforce. According to regional officials, at the end of the day, they have to identify a banned breed based solely on a checklist of appearance features. Compounding the issue, the majority of pit bulls are not purebred or registered by any breed association. As a result, using physical appearance alone doesn’t provide good information. Even dog professionals have about a 30% chance of guessing correctly the makeup of a mixed breed dog by appearance.

The law punishes dogs for their appearance, when aggression can result from many factors, including lack of training and socialization, lack of exercise and mental stimulation, poor breeding, mistreatment, health issues and failure to spay/neuter (which reduces aggression) – Toronto Humane Society

Also, banned breed puppies continue to be offered for sale in Toronto despite the law, and are easily found through online classified ads. How can the city report only 200 pitbulls are in Toronto when more than 200 puppies are available to buy right now from unscrupulous breeders? Because Toronto estimates only 30% of  the total dog population is registered.

Additionally, tracking its impact is difficult. Dog bites are only reported if the bite results in a hospital visit. Hence, large breed and protection/working dog breeds are statistically over-reported, due to the severity of the bite compared to smaller dog breeds. (This fact makes the relatively petite Parson Jack Russell Terrier’s appearance on the chart below downright shocking.) 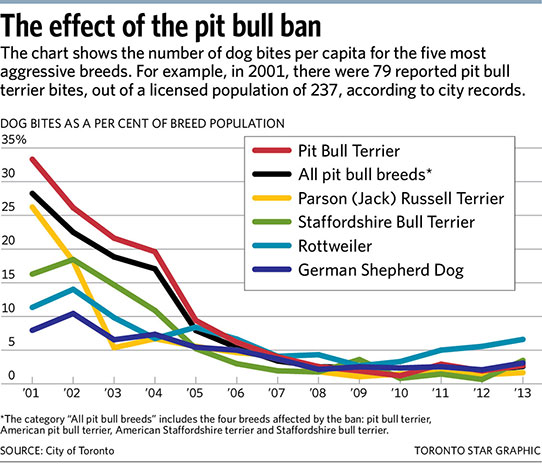 What Else Can Be Done?

So, what can be done to address dog bite incidents? The Toronto Humane society’s position on breed-specific legislation is that it “does not reduce the incidence or severity of dog bites, penalizes responsible pet owners and kills innocent dogs.” They recommend attacking the problem through community outreach: promoting pet licensing, incentivizing spay and neutering, and educating the general public on dog bite awareness.

Four or more of these factors were present in over 80% of dog fatalities studied over a 10 year period:

In addition to the community-minded approach endorsed by the Humane Society, identifying dogs in potentially volatile situations and proactively addressing the root causes of aggression has a big impact. According to the National Canine Research Council, which studied 10 years of dog bite data, well-socialized family pets of any breed are not the issue. 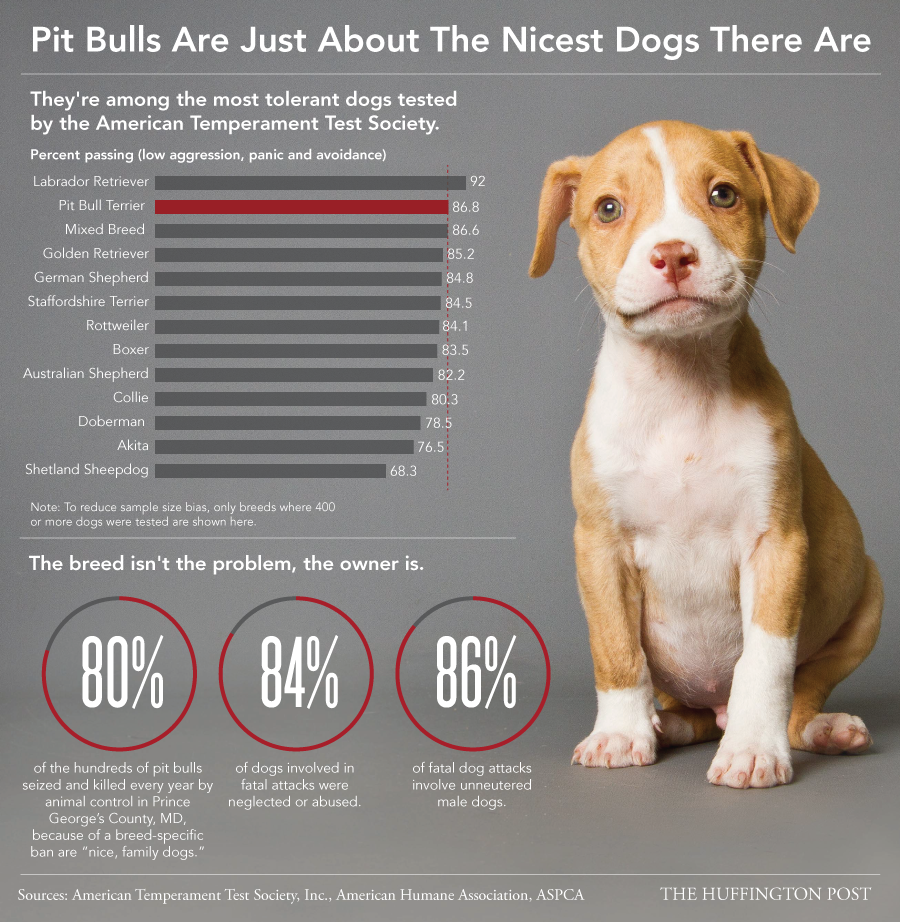