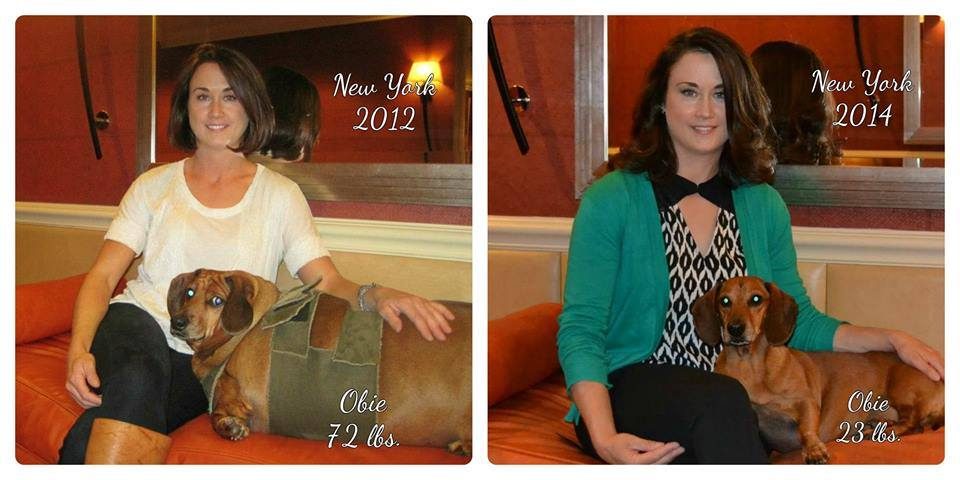 Obie the dachshund: before and after

Some of you dog lovers out there may remember Obie, a morbidly obese dachshund who attracted massive amounts of media attention in 2012. While we adore dogs of any size, it was pretty clear that Obie the dachshund’s health and happiness were at risk, so we’re thrilled to see that he’s undergone an amazing and inspiring slim-down over the last two years. The 7-year-old wiener dog has whittled his waistline from an overstuffed 77 pounds to a sylphlike 23 pounds, a transformation he showed off during an appearance on the “Today Show.”

A normal dachshund weighs between 16 and 32 pounds, but Obie’s weight ballooned to the point where his belly dragged on the ground.  His owners, overwhelmed with the situation, surrendered him to a rescue organization.

That’s when Oregon-based vet tech Nora Vanatta stepped in to care for the pooch and set him on the road to fitness. “His owners truly believed they were showing him that they loved him by feeding him,” she said of his previous home.

“He was eating only people food before, so it took a little bit of a transition to get him on dog food,” Vanatta explained on “Today.” “Now [he has] two meals a day, a couple snacks and lots of exercise.”

Those snacks include carrots, something he would have sniffed at a few years ago. And where the lovable Doxie once had to wear a custom harness to protect his floor-skimming tummy, he’s now active and healthy, although his newly streamlined figure required some surgical intervention.

After Obie dropped about two-thirds of his body weight, he underwent a modified tummy tuck to remove two-and-a-half pounds of surplus skin.

“He is perfect at this weight,” enthuses Vanatta. “You can see his bone structure now. This is a great weight for him.”