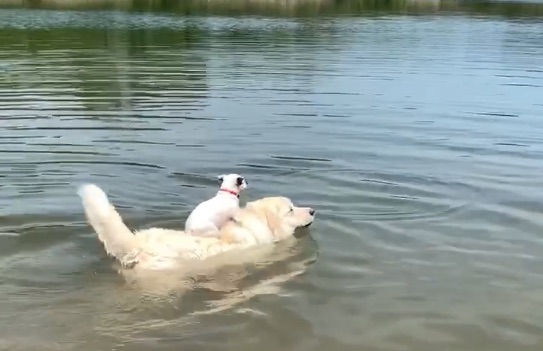 Meet Big Ben and Tiny Tim. We’ve seen dog bonds come in all shapes and sizes, but this is one that’ll make you do an audible AWW or two!

It all started back in 2016 when Tim was being fostered by Jenny, Ben’s mom. She noticed after Tim had been with them for about a month “that he was spending a lot of time with Ben. We would find Tim almost being ‘rocked’ to sleep by sitting next to Ben or on top of him.” As a puppy, Tim would “run over the top of Ben on the couch while playing with the other dogs” which is where it all began.

Their friendship grew even stronger during the summer of 2017 when Tim decided to take a swim on Ben’s back.

“Tim is a good swimmer but still needs help to get on Ben in the water. He’s an expert at balancing though and usually ‘nails the dismount’ when Ben gets onto land” said Jenny.

Speaking of the dismount… behold:

And swimming isn’t the only thing these two do together. Tiny Tim also…

Naps on top of Ben:

Begs on top of Ben:

And basically uses him as a step stool:

While they seem like two peas in a pod, “the bond between Tim and Ben has definitely grown stronger over time. It’s just so natural, we really don’t notice how often Tim is hanging out with Ben.” When they’re out, “Tim will hop on Ben. To us, it’s just normal but everyone is amazed to see it happen spontaneously without prompting from us.”

All the special tricks aside, Jenny says “the middle of the day photos of them napping are my favorite as it just shows the total trust they have in one another.” We couldn’t agree more!