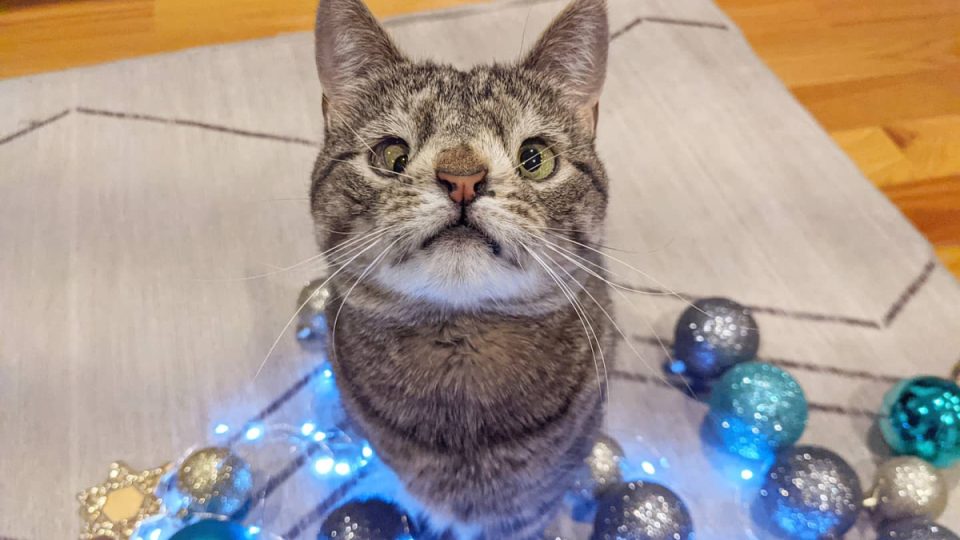 Maya was born with a chromosome abnormality. Photo courtesy of Lauren Makofsky

A “googly eyed” tabby cat’s viral adoption story has prompted a movement to teach kids about disabilities and the importance of inclusion.

It was in 2017 that Maya was found abandoned behind a restaurant in Virginia. Freezing, sick, and terrified, she was brought to a shelter, where she waited for someone to take her home. Three months went by and no one wanted to adopt her because she looked different. She was scheduled to be put down.

Then The Odd Cat Sanctuary in Massachusetts, which helps special needs cats and kittens, stepped in and took Maya. When Lauren Makofsky saw Maya’s adoption post, she and husband Harrison were smitten.

“We just we fell in love with her, no other reason than the fact that we wanted a cat and we loved her from the second we saw her photo,” she said.

Maya has a chromosome abnormality that causes her to look different from most other cats.

“She has a flat face and rounded features, googly eyes, and a little tuft of fur on her nose bridge, which is kind of cool,” said Makofsky.

Maya’s legs are a bit shorter and she has issues with her vision.

“She can see, but her vision isn’t perfect,” said Makofsky. “Apart from that, she’s just a typical cat.”

Maya’s adoption post had gone viral and the sanctuary said people wanted to follow Maya’s story, so Makofsky created an Instagram for the kitty, thinking nothing of it. But the first post attracted 5000 followers and it just kept growing.

“We got a lot of comments like ‘Oh, I’m so sorry for her. What’s wrong with her?’ Things like that that we realized we were doing so much education around. Nothing’s wrong with her. She was born that way. And actually, when you say things like that, that’s super ableist because disability is nothing to feel sorry for.”

Lauren has coached a Special Olympics gymnastics team for years, so she knew how important inclusion is. She and Harrison ended up writing a children’s book about Maya, which has reached people around the world. 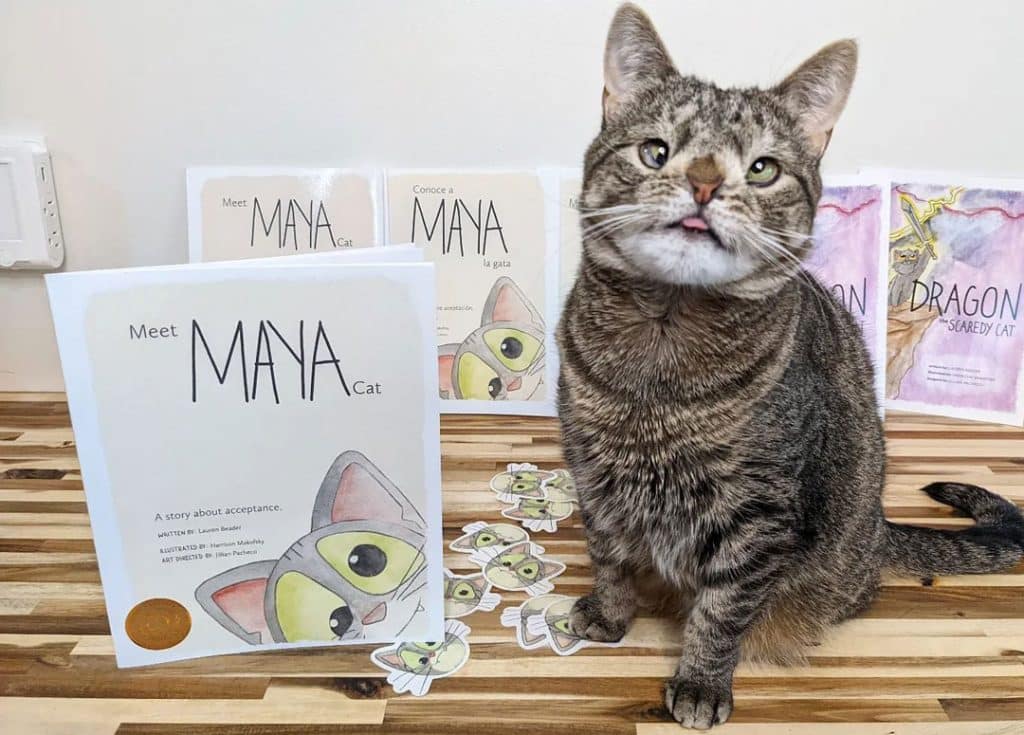 Maya with the book she inspired. Photo courtesy of Lauren Makofsky

“We’re using our book to help teach their kids about disability and just be the ‘in’ for having conversations about disability,” said Makofsky. “So once that started to happen, we realized that we could do a lot more.”

Makofsky said they formalized the organization called AllWorthy as a nonprofit focused on children, so the advocacy work they do is with younger kids.

“Because if kids grow up understanding that disability isn’t a bad thing, then the future is going to be a lot more inclusive and accessible,” said Makofsky.

A Kitty Sibling to Play With

“Her back legs are paralyzed,” said Makofsky. “It happened before we got her, we don’t know if she was hit by a car, abused, or if she was born that way, but she was found on the side of the road by a teenager who took her in and took her to the vet and got her fixed up.”

When Lauren and Harrison adopted Dragon she was in diapers, but they found out she can use a litter box.

“We have some accidents, but we do let her do that,” said Makofsky. “She has no feeling at all in her back legs and tail. And that’s why we called her Dragon because she’s always dragging herself around.”

Dragon was prescribed anti-anxiety medication by her vet because she can be easily frightened, which affects her quality of life.

When she came to Makofsky from foster care, “she was afraid of every sound, every person, every sudden movement,” Makofsky said. “[Medication] helped her just be herself so much better. She’s like a whole different cat than when we took her in.”

Little scooting Dragon inspired her parents to write a book for her, too! (More about that below.)

Mordecai is an Australian cattle dog mix with bright blue eyes and a speckled nose. Mordecai is deaf, most likely caused by a breeding issue, said Makofsky.

“He’s 100% born deaf. He’s cross-eyed, and he also he has extra pupils going on, so his peripheral vision isn’t perfect, but he gets around just fine,“ she said.

You might think a deaf dog would be quiet and never bark. Not so.

“He barks at other dogs and at us when he wants our attention and he also screams,” said Makofsky. “We like to say he screams like a lady in a horror film.”

Makofsky said they’ve had people at the park as ask them if everything’s okay, because they’ve heard Mordecai “scream” and people are concerned that he’s hurt.

Anyone in the United States can request a free copy of either Maya’s book, Dragon’s book, or both. They are offered to classrooms, schools, and libraries so there is access to more inclusive literature about differences.

A few more books are in the works.

“One about the fact that people all look different and that the world would be super boring if we were all the same, and another one will be about our dog,” said Makofsky. “Our goal is to create a variety of books and videos and educational materials that just help grown-ups have conversations with their kids.”

Maya’s social media is used to educate about disabilities, but many people are followers because Maya and her “siblings” are simply adorable.

“They’re not coming in expecting to learn about disability,” said Makofsky. “They’re coming in seeing a cat, and they come out learning a little bit more, and that’s what’s been really cool about what we’ve been doing.” 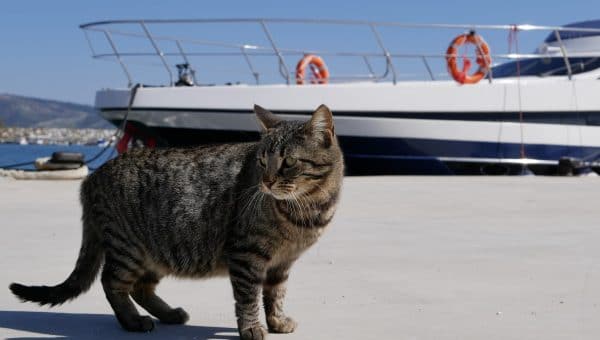 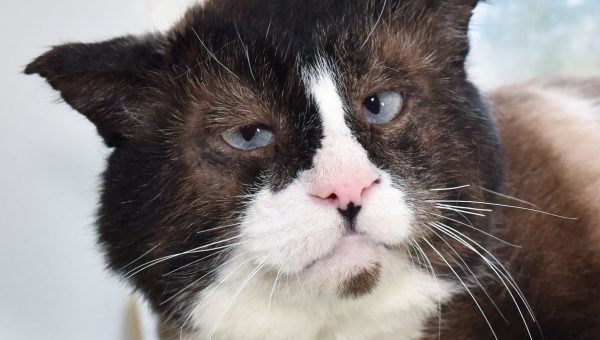 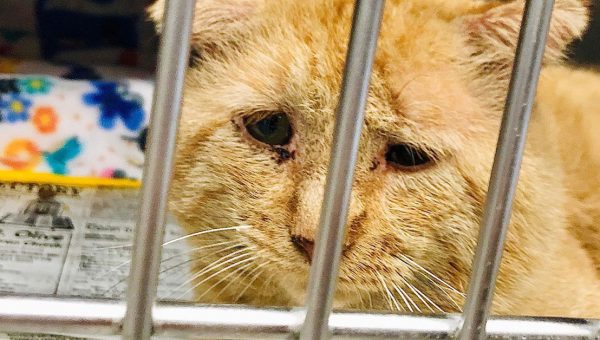