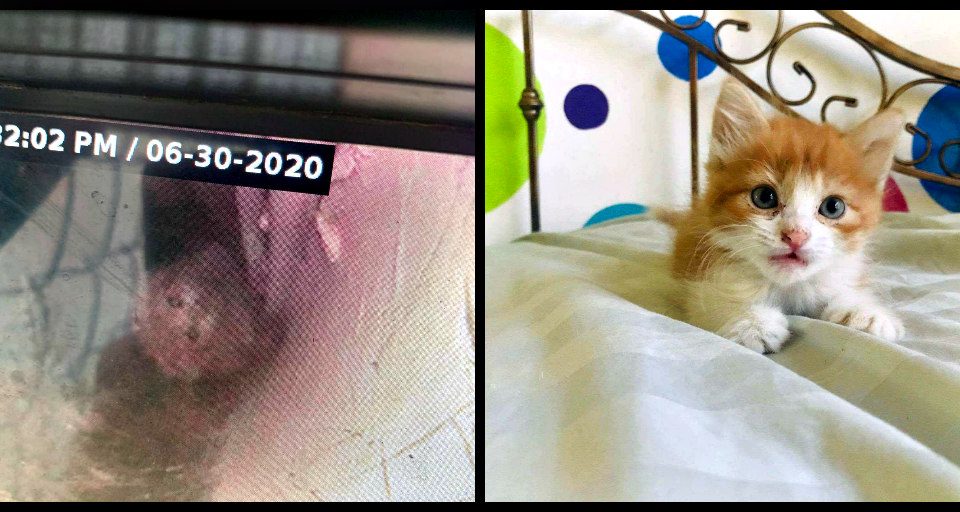 The cries of a kitten in distress led a woman named Katrina to search for a feline she couldn’t find. Standing in a west Phoenix strip center parking lot, Katrina ran to where she thought the sounds were coming from—behind a chain-link fence in an area that was cordoned off to the public. She couldn’t see the kitten, but the echoing sound of the cries led her to believe the kitten was stuck somewhere in a pipe.

Thankfully, Katrina had the phone number of Traci, a volunteer from HARTT, Humane Animal Rescue and Trapping Team, a nonprofit that is dedicated to field rescue of lost pets and strays, and animals in distress in the Phoenix, Arizona area. Katrina sent a video of the sounds of the crying kitten to Traci who then forwarded it to Cheryl Naumann, founder and president of HARTT.

Naumann reached out to a HARTT team member in the area asking her to check out the situation. The team member arrived and climbed the fence around a cell phone tower to see if she could rescue the kitten. The access panel was ripped off the side of the utility box, which could have been how the kitten entered. “She stuck her phone inside the access hole and turned on the video,” Naumann said. “She could hear the kitten was in a pipe.” 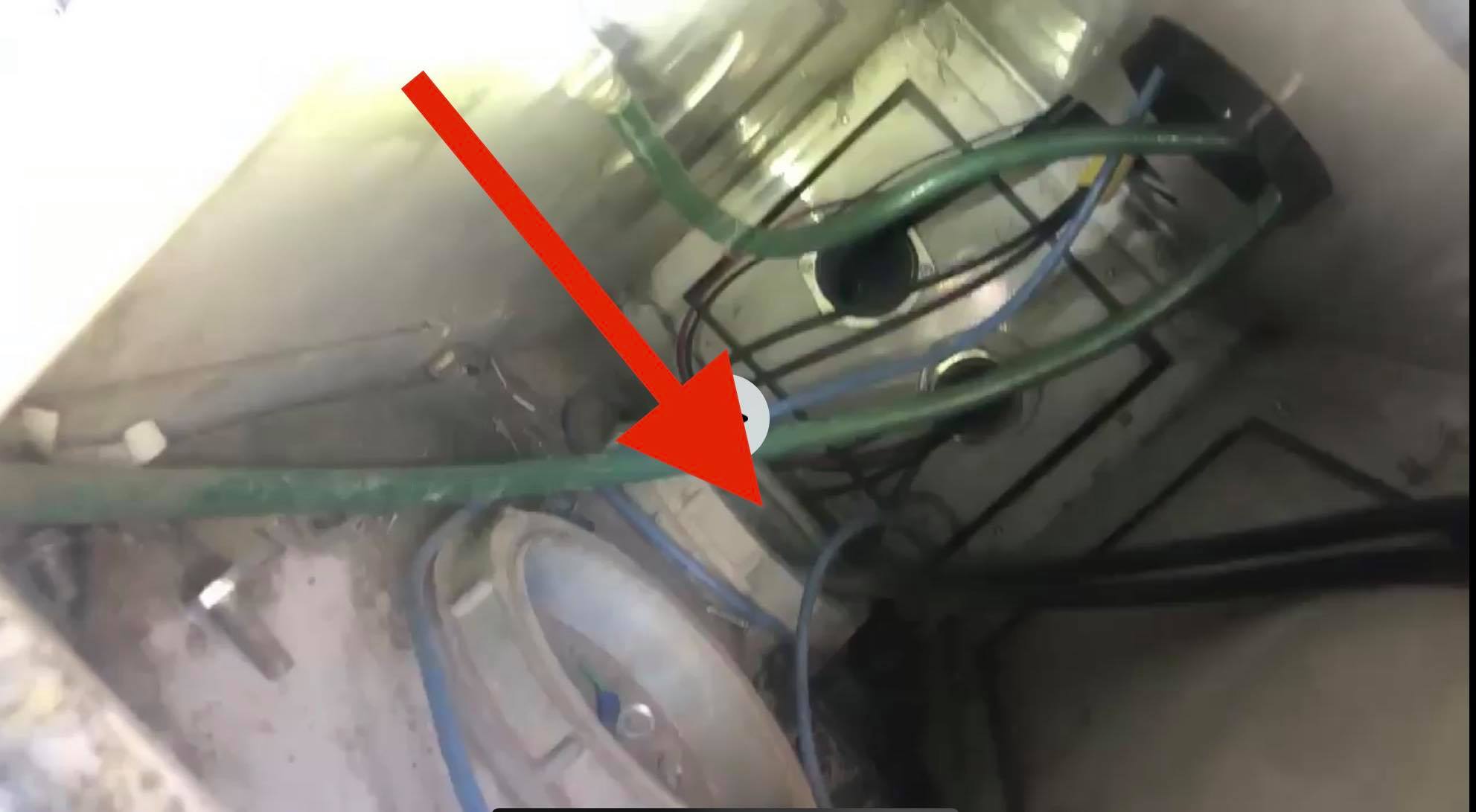 That’s when the “uh-oh” part began.

The area where the kitten was trapped was completely inaccessible. There was equipment at the base of the cell tower and it was a fenced-in area with electrical boxes and transformers. “We didn’t know if it was dangerous,” Naumann said. “Every warning sign around it said, ‘Danger. Keep Out. High Voltage.’”

The volunteer went over to a nearby fire station asking for help. Naumann arrived after the fire department came on the scene. And, although the fire department was able to access the fenced equipment area to assess it, they said they couldn’t do anything until they absolutely knew the area was not a hot zone (an area with live electrical lines that cause electrocution). In the meantime, they threw an ace bandage down the hole to see how far it went and then tied it off at the other end. “It kept going and going,” Naumann said. “They left it in the hole just in case the kitten could possibly climb out but he was obviously too young to know how.” 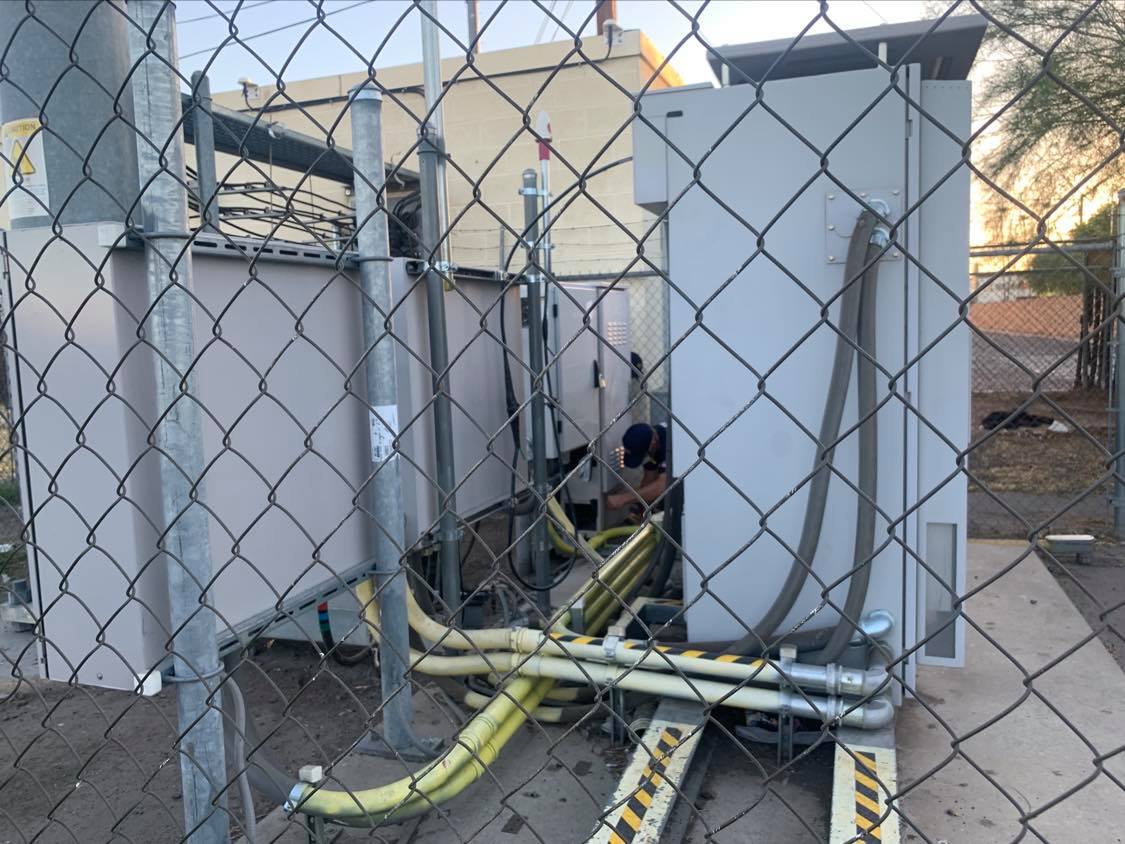 To get to the bottom of it all, Naumann made a call to Crown Castle, the name of the tech company on the fence. After describing the strange situation, Naumann found out that although Crown Castle owned the property, telecom company Ericsson maintained the towers.

After reaching someone at Ericsson, Naumann was connected to someone in Arizona and eventually transferred to the person who actually built the site 24 years ago. That person sent someone to the scene who heard the cries of the kitten. 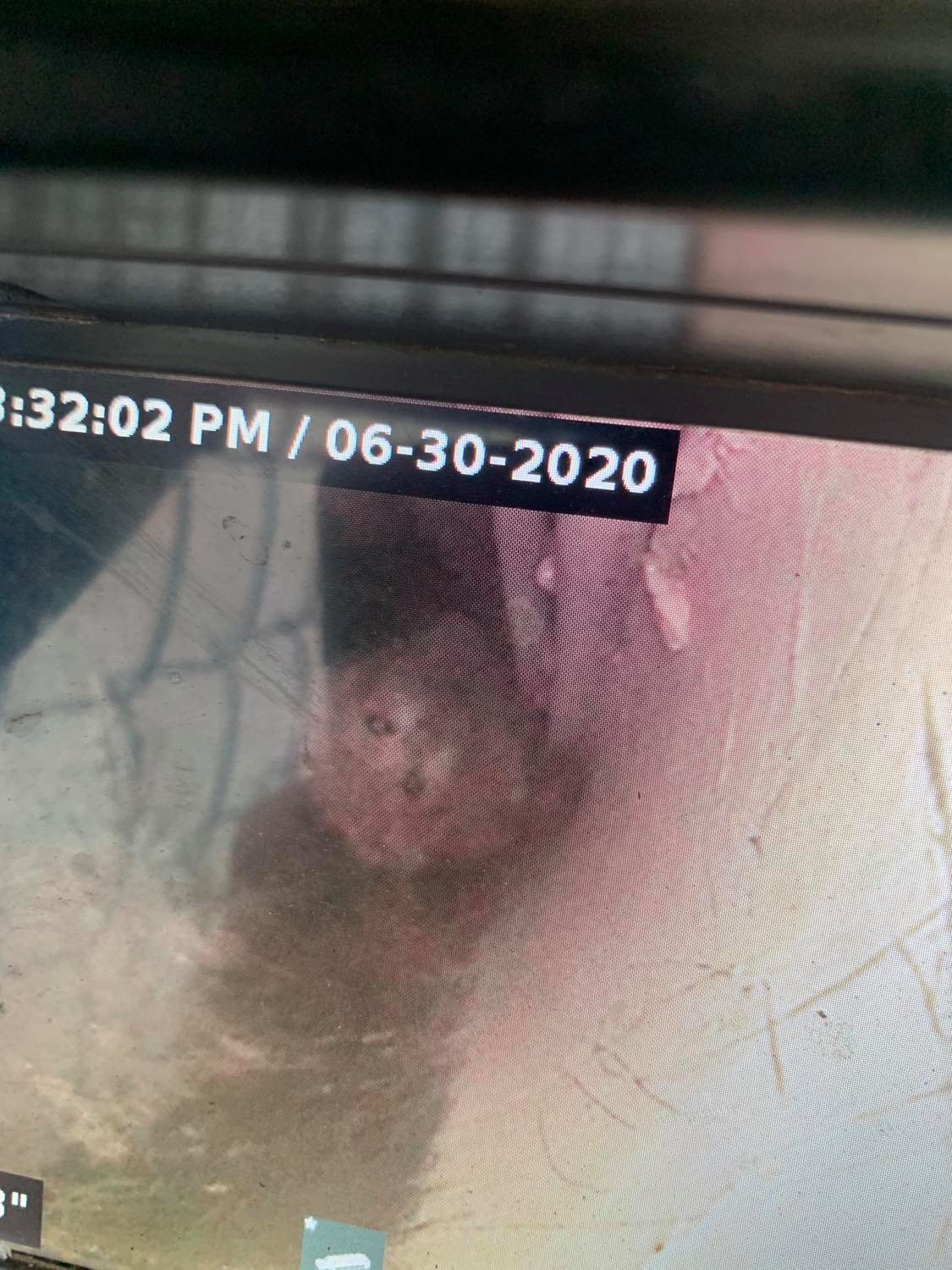 It was determined that the kitten was stuck in an underground pipe, a conduit about four inches in diameter used to house electrical wiring and communication lines.

However, the group then had to contact Sprint/T-Mobile before digging up any equipment because that company operated the tower.

“The day was ticking by and it was after 12 noon,” Naumann said. “The Phoenix sun was high, it was hot, and we didn’t know the temperature conditions inside the conduit so we didn’t know what the kitten was encountering down there. It could be dangerous. Every delay made us nervous wondering if this kitten could hold up in that type of environment.”

While waiting for Sprint/T-Mobile to show up, Naumann called Diamondback Plumbing and asked them to send someone with an optical push camera (which is used to scope toilets, pipes, and sewers). “They were wonderful on the phone and said they’d make it a priority,” Naumann said. 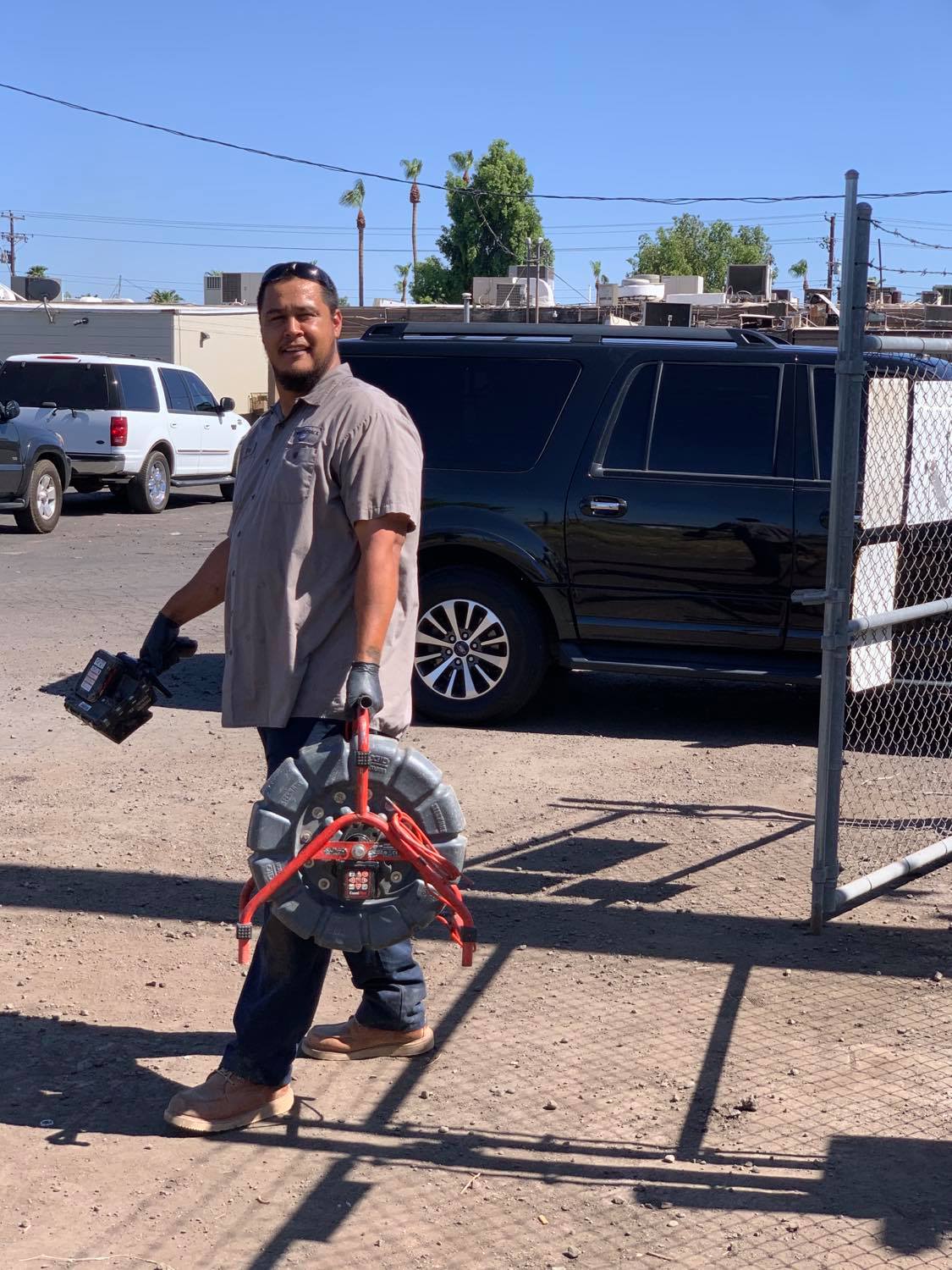 Headed by Chad Smith, the Diamondback Plumbing team showed up and started to pass the camera through. It’s similar to a long hose that goes up to 200 feet in length and has an optical camera with a light on the end. They had to do it even though they knew it would be frightening for the kitten to see it coming. “I kept saying, ‘Go slow, go slow,’ ” Naumann said.

While they thought the kitten would be four to 10 feet inside, they kept reading the screen as it passed 10 feet, 15 feet, 20 feet. No kitten. Then 25 feet, 30 feet. “Finally at 33 feet we saw the image of the kitten,” Naumann said. “It was this tiny orange tabby all balled up with big blue eyes just staring at the camera. He was terrified.”

They knew the kitten was 33 feet in but in what direction? How far underground? Did the conduit curve? There was no way to know. Concrete covered three sides of the equipment pad. But, there was a side uncovered by concrete just north of the area. 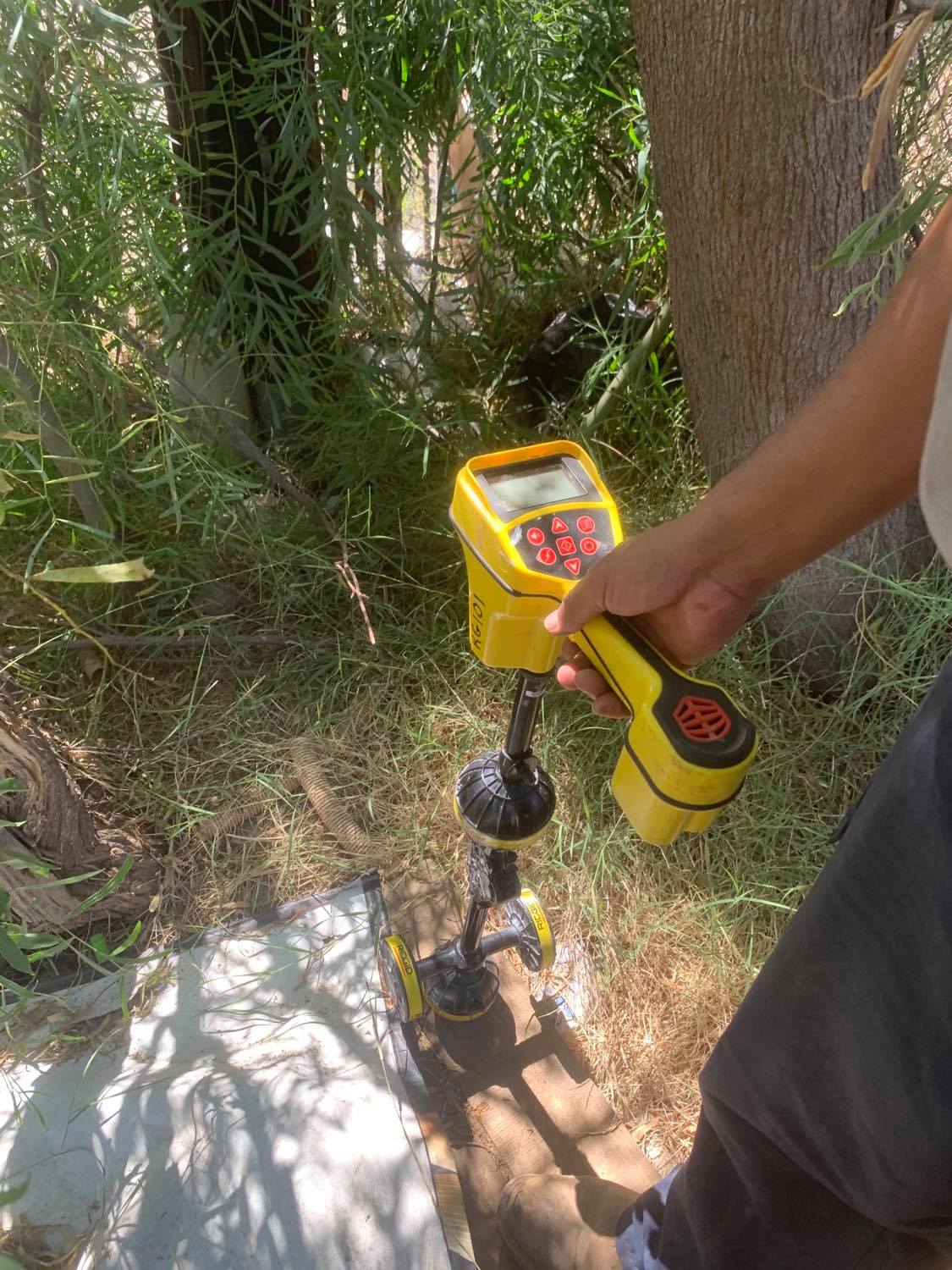 Using a piece of equipment called a Locator typically used aboveground, Diamondback Plumbing was able to find the head of the camera. “If they can figure out where the head of the camera is, that’s where the kitten is,” Naumann said. They finally heard the sound they were listening for, which thankfully was north in the dirt, the only area where they would not have to dig up a parking lot.

They determined the kitten was three feet underground and 33 feet north.

Then Terry Duffield, construction project manager at Spring/T-Mobile showed up with a co-worker. He checked out the conduit and assessed the area. He said the two wires inside the conduit were dead lines and there were no live wires, so there was no risk of electrocution, which was great news! 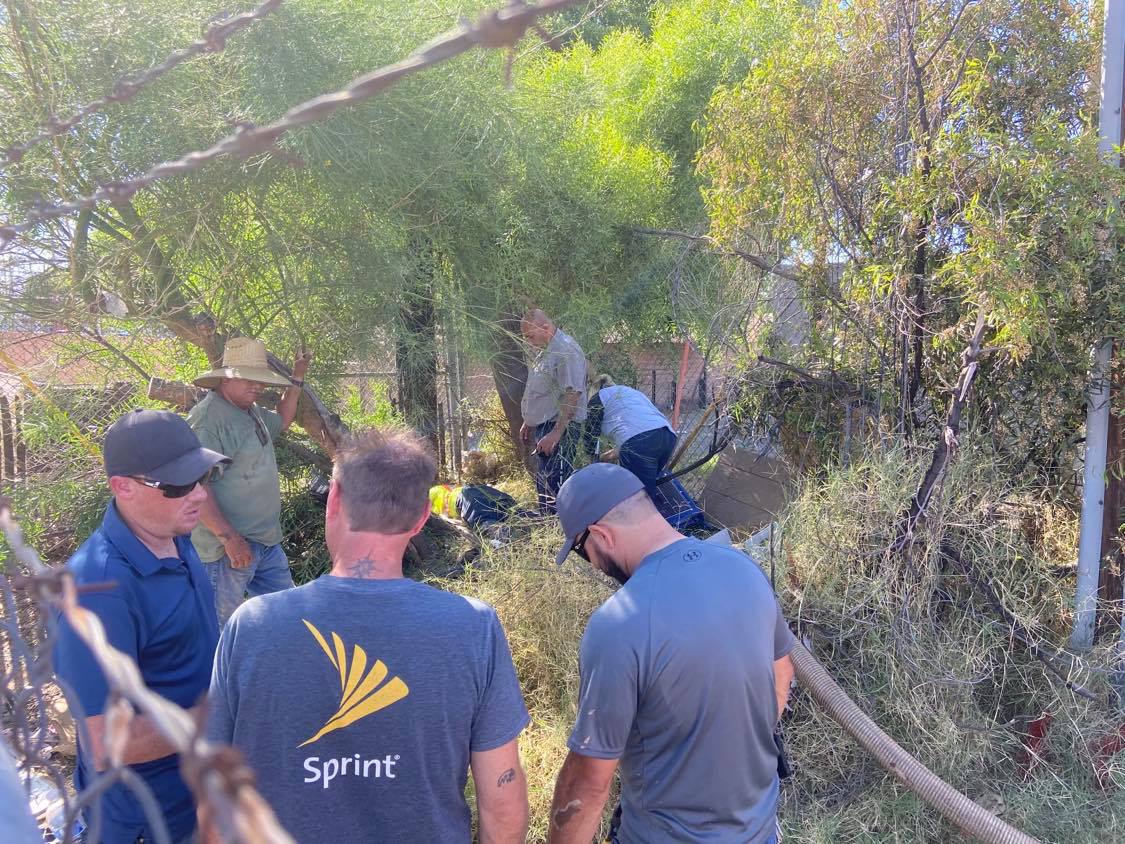 Duffield gave permission to rescue the kitten. Then the company Atlas came in with a “hydro excavator” called the Ditch Witch, basically an industrial-sized vacuum. “It terrified me that they might vacuum up the kitten,” Naumann said.

It was at that point that Naumann knew the kitten could be saved.

Using the Ditch Witch they started to dig down to the conduit using a technique called potholing. A tool that looks like a power washer sprays high power water turning the soil into mud. As the dirt is being liquidated the vacuum starts vacuuming it out. 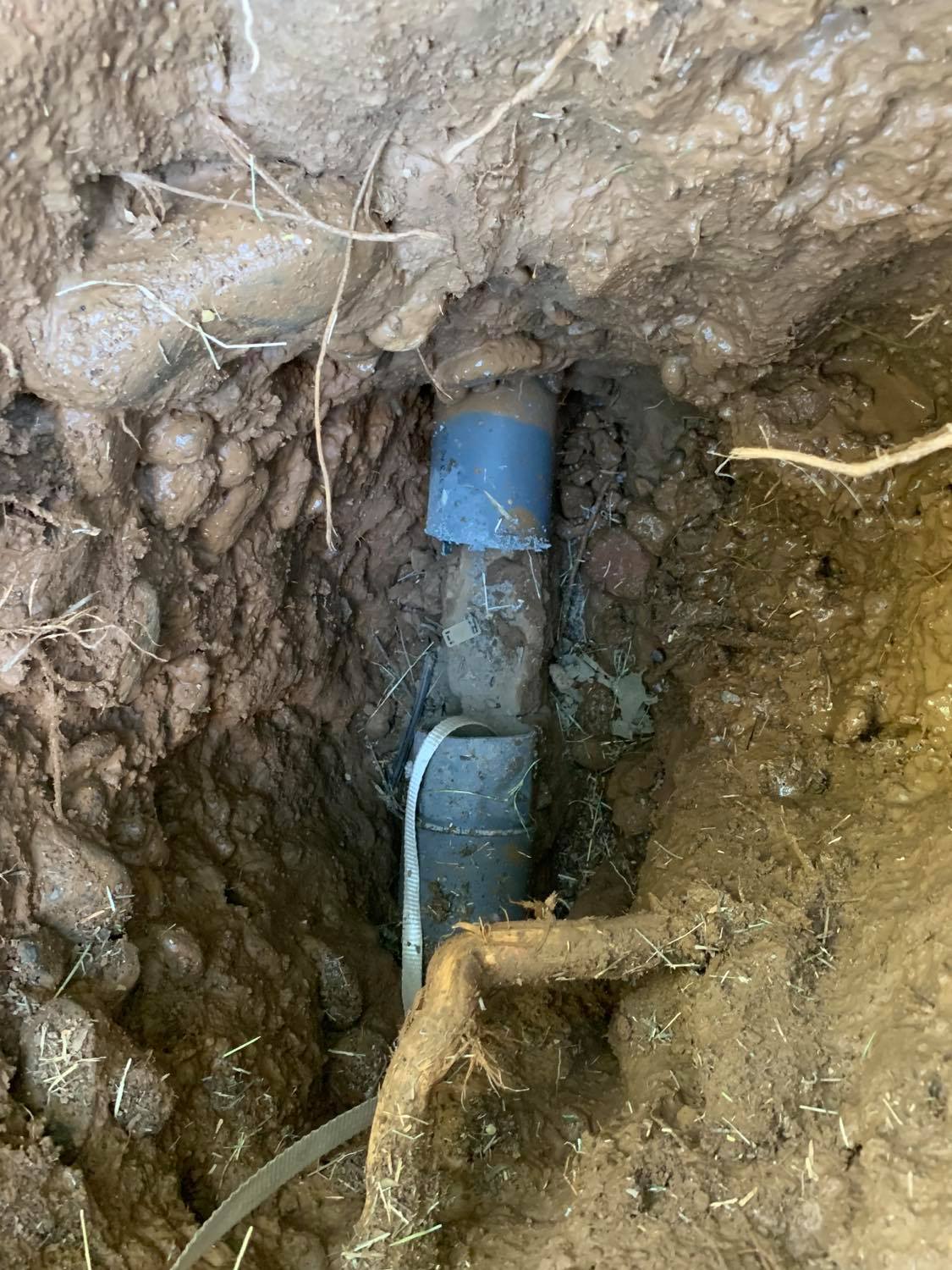 After 10 minutes, they were three feet down but couldn’t find the conduit. They used the Ditch Witch again to dig another hole on the other side. They finally found the conduit on the backside of where the kitten was located. But in between the newly-excavated hole and the kitten was a length of conduit clogged by rocks and old debris that had accumulated over the years.

At this point, the camera revealed that the kitten was curled in a ball and not breathing well. The team didn’t know if the kitten was physically stuck and couldn’t move or if he was running out of air. “At this point, we were getting really worried,” Naumann said. “He was facing away from us and his breathing seemed intermittent. We were so close but terrified. We had to move fast.”

They had to dig a third hole, this one in a spot that was even closer to the kitten. But they had to be extra careful while they were cutting. Rags in the pipe were forming a buffer between the kitten and the cutting. 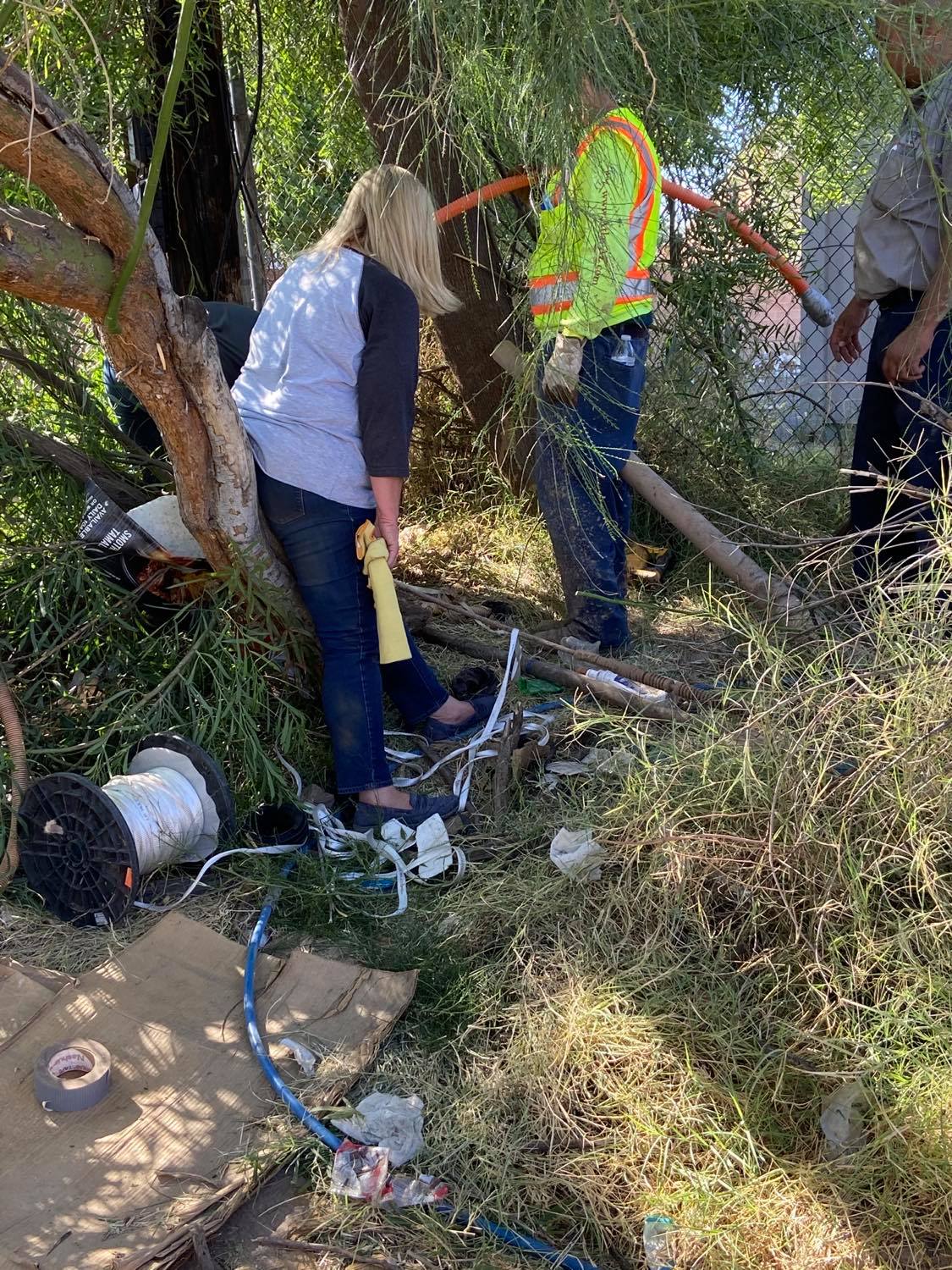 As they cut the third hole they finally found the kitten. “I went over with the appropriate equipment, kitten crate, and a cat net,” Naumann said, adding she thought the kitten might see daylight and try to run.

“They cut the hole, and I’m sitting there in the mud with one of the guys and getting ready to receive the kitten,” she said. “And he cuts and reaches in and gets the rags out and he whips out the orange tabby kitten in his hands. The kitten was crying and I put him in the carrier. He was not happy and crying loud. He was scared and didn’t realize his life had become immensely better.”

It Took a Village

The rescue took 22 people and five hours under the hot Arizona sun with temperatures over 100 degrees.

“Out of all our technical rescues this was clearly the most inaccessible animal we’ve encountered where we truly didn’t know if we had the manpower and capability to bring out the animal alive,” Naumann said. 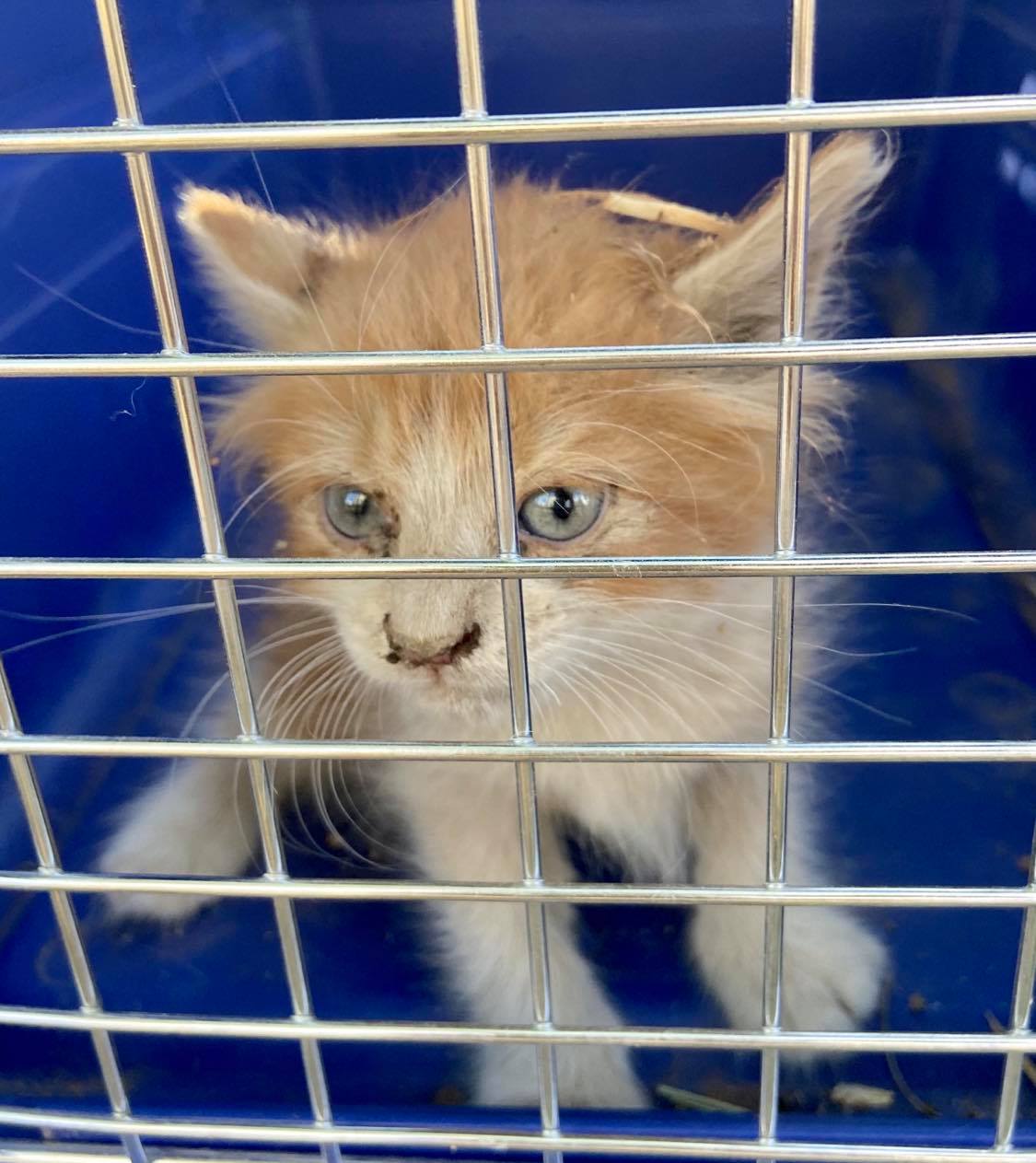 “It was a huge group effort,” said Sprint/T-Mobile’s Duffield, an animal lover. “It was successful for everyone who was there on-site. Everyone worked together to achieve the end-of-the-day goal to save the kitty.”

Smith of Diamondback Plumbing, who has two cats and a dog at home, was happy to help. “We’ve done a lot of camera jobs in my day but I’ve never rescued a cat,” he said. “It was good to see everyone come together to help an animal.”

The 5-week old kitten named Milo is safe in a foster home with his brother, another orange tabby also found at the same site. While both are being treated for an upper respiratory infection, they have a great prognosis. Another white kitten also found at the scene is in another foster home. Naumann plans to return to the site to try to trap who she believes is the mother cat. 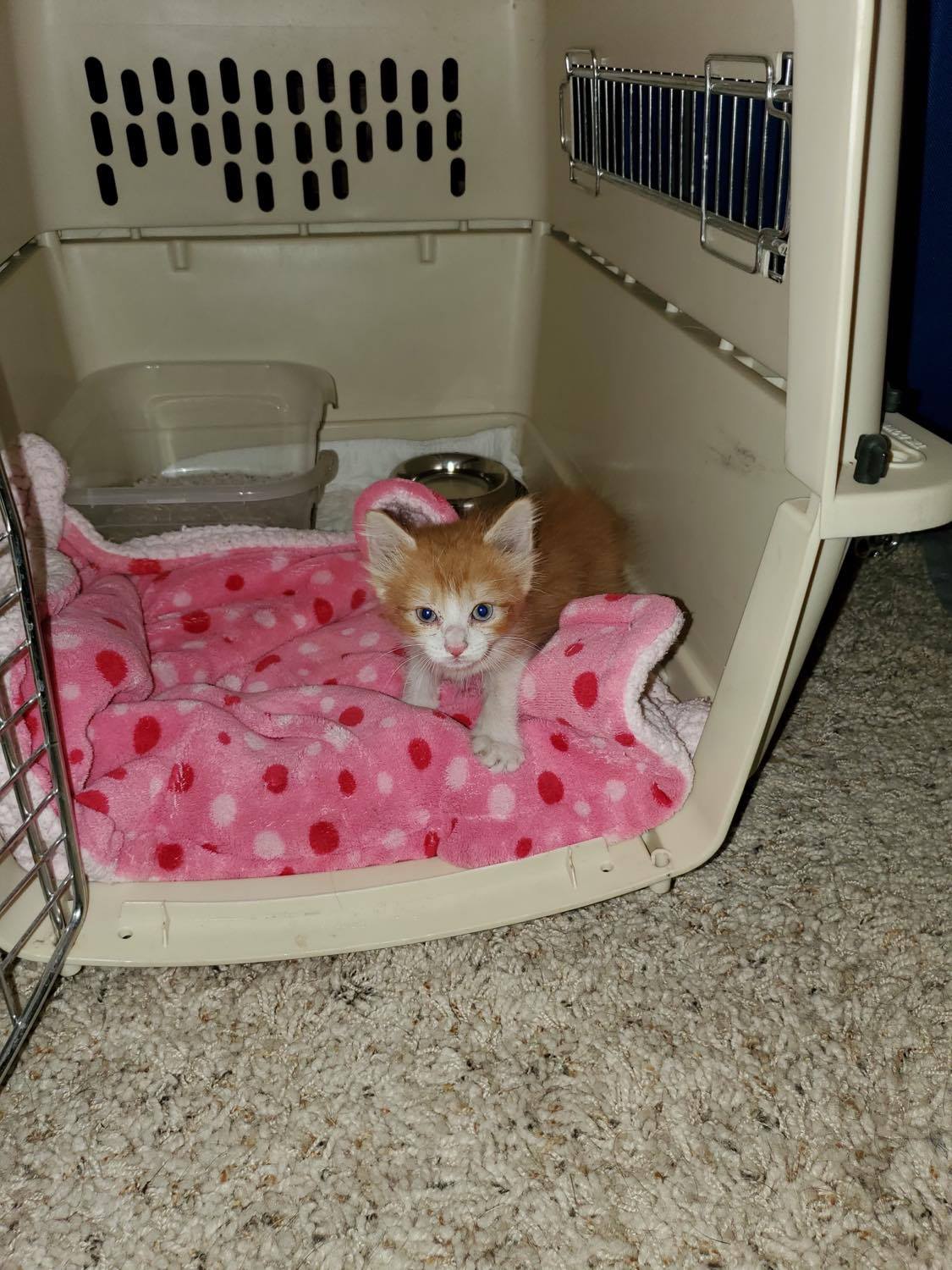 “The cat would have met a tragic fate if it had not been for their compassion and heroism,” Naumann said of everyone at the scene. “All of us at HARTT are eternally grateful.”

Directly after Milo was captured, “all the guys on crew came over to take pictures,” Naumann said. “They were so grateful to save a life that day!”

Everybody waived their fees, even though there was a lot of time and labor, along with special equipment, that went into the rescue. “It would have been thousands of dollars,” Naumann said. “It was so incredible that they had such compassion. They didn’t have to do this but enough people really cared about saving a life.”

Watch the incredible rescue here (and watch to the end for the very happy ending)!

To support the work of HARTT and allow them to continue lifesaving rescues, please visit AZhartt.org.