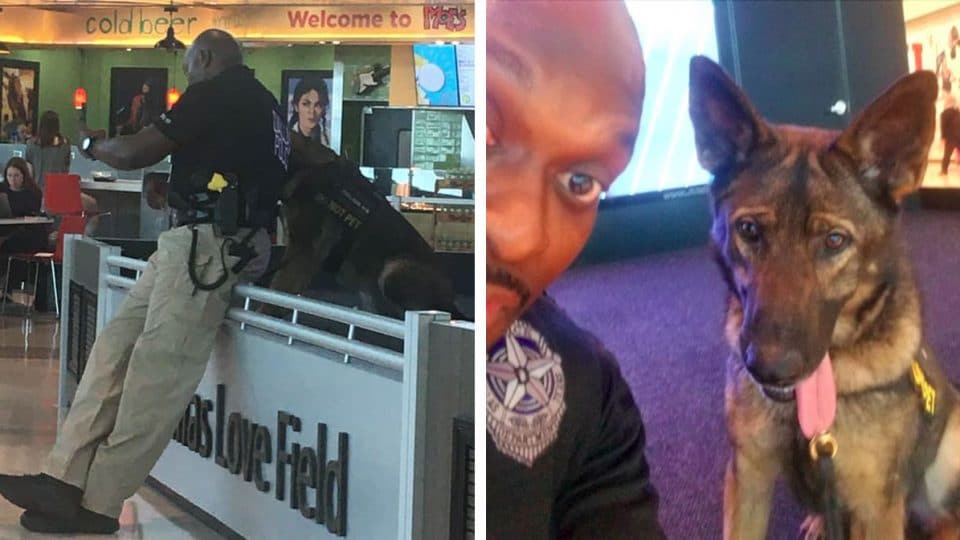 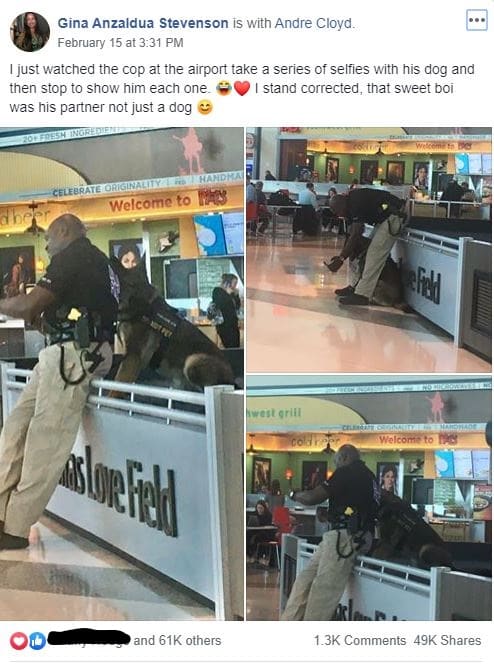 Stevenson thought it was cute when the officer showed each selfie to the dog, who she originally thought was a pet. She soon learned the handsome pooch was the officer’s K9 partner, a 3 ½-year-old German shepherd. She then decided to spread the joy from that moment and posted it to the Dogspotting Society Facebook page. Then the likes and shares kept on coming.

Cloyd soon got wind of it and responded by posting his original selfies to the Dogspotting page. He was pleasantly surprised by the attention showered on himself and Zigi, especially since the duo were just on a break from their job of serving and protecting the public.

What prompted Cloyd’s selfie with his K9 partner? It all comes down to family. Cloyd is the only one in his family living in North Texas. His family stays in touch via daily text and photos.

On that now-famous selfie-taking morning, Cloyd’s mother sent him a photo and wished the family a good day. Cloyd responded in kind with selfies of himself and Zigi taken at their usual post at the airport.

Referring to Zigi and Bentley (his other dog at home) as his “kids,” Cloyd is a self-proclaimed, lifelong animal lover, making him a perfect fit for the Dallas Police Department’s K9 Unit. Both dogs make up his Texas family, and they do everything together, including watch movies, go to the gym, and, of course, take photos.

Cloyd sees Zigi as the star of the duo. However, they both are part of an entire police department watching out for its citizens to ensure everyone is safe.

Thank You Goes A Long Way

He hopes the recent fanfare will get others to pay it forward by giving thanks to their local police officers and shining a light on the positive instead of so much recent negativity.

Have a safe and productive day, from Zigi, Bentley, and myself?

It’s pretty easy to make a police officer’s day by giving thanks for their service. Somewhere out there, Officers Cloyd and Zigi will be feeling it, too. And we thank them both.