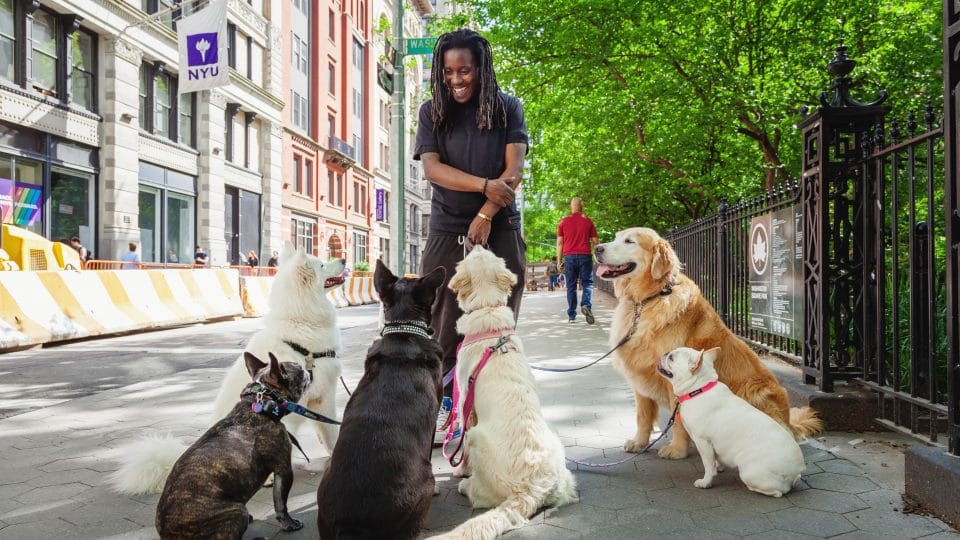 A chance encounter with a dog changed Keema Hutcherson’s life.

Hutcherson survived a tough childhood and adolescence. As the oldest of 15 siblings with a mom who had a drug problem, she struggled to care for the family. When she was a teen, her father was released from prison and took custody of his oldest daughter. Things seemed better until he learned she was a lesbian—and he crossed a line no father should cross.

Pain and fear mark her memories of those times. She got out, but the 2008 recession made work scarce, and she didn’t have much money. Then Hutcherson applied for a job at a doggie daycare facility.

She entered a roomful of dogs, and a Rottweiler named Boogie approached her. She was nervous, but the big dog put his paws on her shoulders and licked her face.

That’s the moment when everything changed.

“I just felt new,” she recalls in Keema & Her Pack, a short film by Mutual Rescue, an initiative that highlights the healing power of pets. “It felt like that dog took all the pain I was going through, everything I was going through. He took it without even saying anything. And from then on, it was like, I had to have dogs in my life.”

In the film, she credits her ability to love herself and others to Boogie. When she looked into his eyes and said, “I love you,” it was the first time she’d ever said the words and meant it.

Since then, Hutcherson started a dog walking business that she has run for over a decade in New York City. She’s also made a happy home with her wife, Sable; their daughter, Taniya; and their rescue dog, Mr. Bentley. 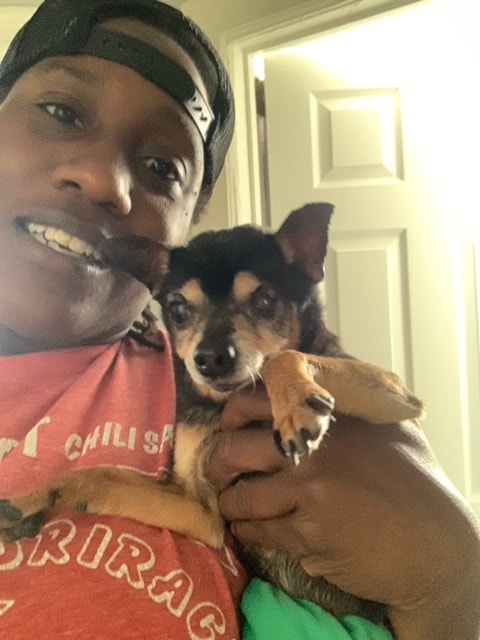 Keema Hutcherson cradles her rescue dog, Mr. Bentley. “He was a skinny little thing when he came [to live with us]. But now he’s this fat little guy that just rules our house,” she says. Photo courtesy of Keema Hutcherson

Sadly, Boogie died of cancer several years ago. When his owner watched Keema & Her Pack, she was surprised to learn the impact her dog had made, Hutcherson told The Dog People.

Because of Boogie’s loving temperament, Hutcherson was shocked to find when walking him, many people would run away from him, sometimes even into traffic. She believes breeds like Rottweilers and Pit Bulls don’t deserve their fearsome reputations—bad owners do.

“It’s not the dog,” she says. “You start to realize it’s the people behind the dog.”

Hutcherson doesn’t play favorites with any of the rescue dogs she walks now. She loves them all individually because of their unique attitudes. Clients interviewed in the film rave about her special way with dogs and how much they adore her.

Her secret to connecting with dogs: appreciating their “childlike minds,” and loving dogs the way she wants to be loved.

“If they’ve been through something, they know when someone else has been through it,” she says. “They feel when you’re genuine.”

She hopes her story helps inspire others to adopt dogs and potentially share their own stories of how pets have helped them with MutualRescue.org.

“There are people going through stuff out here, but something is saving us. And the something—the best thing—is man’s best friend,” she says.

Keema & Her Pack is the latest release from Mutual Rescue. The goal is to show that supporting animals and rescue organizations also helps people.

Carol Novello, founder of Mutual Rescue and author of Mutual Rescue: How Adopting a Homeless Animal Can Save You, Too, says she and her team were excited for the chance to share Hutcherson’s story with the world.

“So many of us need to heal, and need to find ways to experience love in our lives, and animals are a way to do that,” she tells The Dog People. “Keema’s story is a great example of that.”

The film was accepted into nine juried film festivals across America and then released online last month for free. The global response from viewers has been overwhelmingly positive.

“We’re thrilled to see that it’s resonating with folks,” she says.

Novello got the idea for Mutual Rescue after her experience as a business executive who moved into animal welfare. When she became president of Humane Society Silicon Valley, she was surprised by how many people made comments like, “Why are you helping animals when you could be helping people?” and “I feel so guilty when I give to animals when there are so many people in need.”

“I found that very curious,” she says. “I saw firsthand the impact that animals were having on people, And I just said, ‘We really need to be doing something that illustrates that when we’re saving an animal, more often than not, they’re rescuing us right back.’”

Mutual Rescue’s first film, Eric & Peety, featured a dangerously obese man who found his way back to health—even racing in marathons—by rescuing a dog who became his running buddy and devoted companion. Shortly after its release on Valentine’s Day of 2016, it went viral, garnering over 100 million views.

“That’s when I really knew we were onto something,” she says.

Mutual Rescue has released about a dozen films since then, and is currently inviting people to share stories of rescue pets who have helped transform their lives at MutualRescue.org for consideration to be in a future film or book.

Novello says the group hopes not only to raise awareness through films like Keema & Her Pack but also create ways for people to engage with shelter pets locally. Mutual Rescue partnered with AdoptAPet.com so that people can search on their zip code to find adoptable pets in their area.

In 2021, Mutual Rescue hopes to re-launch the Doggy Day Out program, which was sidelined during the coronavirus pandemic, to make it easy for volunteers to walk shelter dogs.

Ultimately, she hopes the public will embrace the importance of pets in our lives.

“When you give to an animal-related cause, you are not taking away from humans,” Novello says. “You’re actually giving to something that’s going to help solve the problem. Animals are part of the solution.”

To submit a story about how a rescue pet transformed your life, please visit: MutualRescue.org. The submission deadline is December 30, 2020.