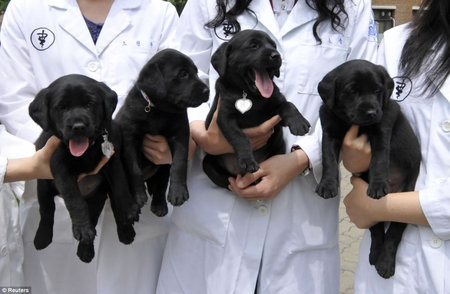 Dogs have always been man’s best friend, but the love is deeper than ever before with the pet/owner bond now resembling more of a parent/child bond. More and more people are treating their pets like family instead of property, which has led to unprecedented growth and innovation in the pet product industry as companies scramble to capitalize on the needs of pet parents.

We’ll uncover the emerging trends and technological advances in the pet marketplace to give you an idea of where pet parenthood is headed in the future.

Money is No Object

The U.S. pet product industry has exploded in the last twenty years, more than tripling from $17 billion spent in 1994 to an estimated $60 billion this year. To put that in perspective, it’s more than movies, music, and video game spending combined! 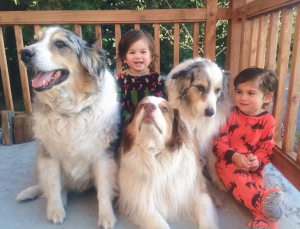 Many people now consider pets as part of the family and pet industry spending is booming as a result. Photo courtesy of Marisa Rings.

It’s not just that we have more pets than ever before—now nearly 65 percent of U.S. households have at least one pet and nearly half of all households have two or more—but we are spending more for higher quality and luxuries.

Here’s how 2015 spending breaks down, according to the American Pet Products Association:

It seems no price is too high when it comes to pampering our pets, even in the midst of a recession. The pet industry has been dubbed “immune to recession” with the vast majority of people spending the same or more on their pets despite tougher economic times, and even skimping on personal luxuries to make sure their pet doesn’t go without the best.

The strong connection between dogs and their owners is thought to be key to higher spending. Most people now consider their dog to be part of the family, so they are willing to spend more on the health and wellness of their pet.

All sorts of gadgets are coming out geared toward our pets. From a machine that plays fetch with your dog to video monitors that allow you to watch and talk to your pet remotely to fitness devices that monitor your pet’s activity level, innovation knows no bounds for the booming pet industry.

“People have genuine love for their pets, and people buy things for what they love,” technology reporter Gabe Slate says. “If there is a technology, service, or device that will make their pet’s life better, people will spend money on it.”

Slate noticed a huge presence of pet tech at the annual Consumer Electronics Show in Las Vegas this past January, but hasn’t seen any gadget stand out as a “must-have” item.

“There are dozens of devices out there but nothing has broken through mainstream as a household name,” Slate explains. “I don’t have one slam-dunk gadget to recommend.”

Here is a sampling of some gadgets already on the market:

There are also some really cool gadgets in the works; Clever Pet is an interactive toy that turns meal-time into learning time by dispensing food when your dog interacts with the device:

At this rate, who knows what engineers will come up with for our furry friends in the future!

Saving the environment isn’t just for humans anymore. All sorts of eco-friendly options are available when it comes to our furry friends like shampoos, wipes, beds, toys, and collars—even dog toilets. 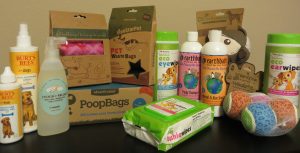 There are a wide variety of eco-friendly products on the market, from shampoos and wipes to compostable poop bags to sustainable toys and more.

You’ve probably seen these in stores: eco-friendly cleansers in recyclable packaging. These wipes and shampoos are made with organic ingredients minus the questionable chemicals we avoid in our products, like parabens and sulfates. One of the most popular and widely-available brands is Earthbath, but there are scores of others available.

The wave of the future is sure to include better pet waste disposal options. Not only is dog poop just plain gross, it’s also unsanitary because it has bacteria similar to human waste. Roughly 30% of pollutants in waterways are attributed to dog waste and non-renewable plastics are the fourth-highest generated waste in the United States, so scooping poop up in a plastic bag and tossing it is hardly the best option.

Enter biodegradable poop bags and septic tanks for dogs. Biodegradable bags are made from renewable ingredients that break down lightyears faster than standard plastic bags. Poopbags.com rates the eco-friendliness of their products on a scale of 1 to 5. Biobags is another widely-available option.

Although dog poop can be composted, most compost facilities won’t take it. So why not just flush it down the toilet? A doggy toilet, of course!

Doggie Dooley is an in-ground septic tank that composts dog waste to turn it from solid to liquid without damaging the soil or grass. The key is adding a natural-acting bacteria/enzyme mix, known as a septic starter, that breaks down the waste. It’s fairly inexpensive; it will cost you roughly $100 for the system and enough septic starter for nearly two years. There is also a do-it-yourself version, but you will still need the septic starter.

With plastic bag bans on the rise, this may be the wave of the future and could be one of the easiest ways to reduce your carbon paw-print.

The internet has revolutionized the way we live, and it’s no different when it comes to our pets. All kinds of pet-related sites are emerging, ranging from pet sitting to borrowing to dating sites! 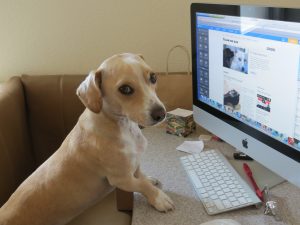 The internet has revolutionized the way we socialize, and it’s no different for our pets with pet-networking sites becoming mainstream.

Do you love dogs but don’t have the time, resources, or space to call one your own? No problem! Now, you can “borrow” a dog. WalkZee is a community that allows you to search for local shelter dogs and schedule a walk. A similar San Francisco-based group, DOGO!, partners with local rescue groups to help people enjoy the companionship of a dog without the long-term commitment. These groups are offering homeless dogs the attention, exercise, and socialization they so desperately need.

If this all sounds appealing, how about making money on top of it? With pet sitting, you can do just that! Rover.com is the largest network of pet sitters nationwide, offering anything from overnight stays to daily walks. Prices typically beat kennels and hotels, allowing your dog to be comfortable in his own home and gain a new two-legged friend.

Must love dogs: It’s not just a romcom—now there are dating and meet-up sites centered around your pooch. Whether you’re looking for pet play dates or your two-legged mate, sites like Pets Dating and You Must Love Dogs Dating connect dog lovers with a point and click. These “petworking” sites are popping up all over the place as an alternate to trying your luck the old-fashioned way at the dog park.

The internet knows no bounds so who knows what else the future holds for dogs on the web!

An emerging trend and possible wave of the future are crossbreeds, known as designer dog breeds or hybrids. These dogs are a cross between two purebred dogs, which differs from a mutt, whose ancestry is unknown. Animal Planet did a series on a number of these hybrids, explaining what they are and their character traits. 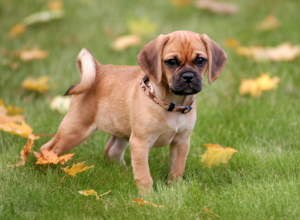 What do you get when you cross a pug with a beagle? One really cute and trendy dog!

Mixed breeds like goldendoodles (a cross between a golden retriever and a poodle) and puggles (pug/beagle) are not only becoming popular, but can offer some advantages. Mixed-breed dogs can have fewer health problems than purebreds and can be easier to train than their purebred counterparts, but this is not always the case. With hybrids, you are rolling the dice with the eventual size and temperament of the dog.

These dogs are not always 50/50; in fact, they can be 25/75, 50/50, or 75/25.  There are literally hundreds of possible combinations and of course, there are some rather unusual combinations with must-see adorable pictures!

One big bonus when it comes to designer dogs is they are typically available for adoption. Millions of unwanted dogs end up in shelters every year and sadly, more than 9000 are put down daily. Adopting a hybrid not only saves a life, but it’s trendy, too.

Pet parenthood is exploding and because we now think of our pets as family, we’re willing to spend more money and go to greater lengths for our dogs. With that comes innovation and a variety of products, services, and connectivity never before thought possible, which means the future of pet parenthood is looking pretty darn cool.