Warm weather brings fun in the sun for our dogs—but also an increase in fleas! Illnesses from mosquito, tick and flea bites are on the rise in the United States, according to a new report from the Centers for Disease Control and Prevention (CDC).

If you’re looking for advice and tips on detection, treatment, and prevention for flea season this year, you’ve come to the right place.

This article will help you determine when flea season starts in your area and if your dog has fleas. We’ll also tell you everything you need to know about fleas and flea allergies in dogs. For recommendations on which flea treatments work best for keeping your dog, your home, and your yard flea-free, check out our comprehensive guide to flea treatments.

When is Flea Season? 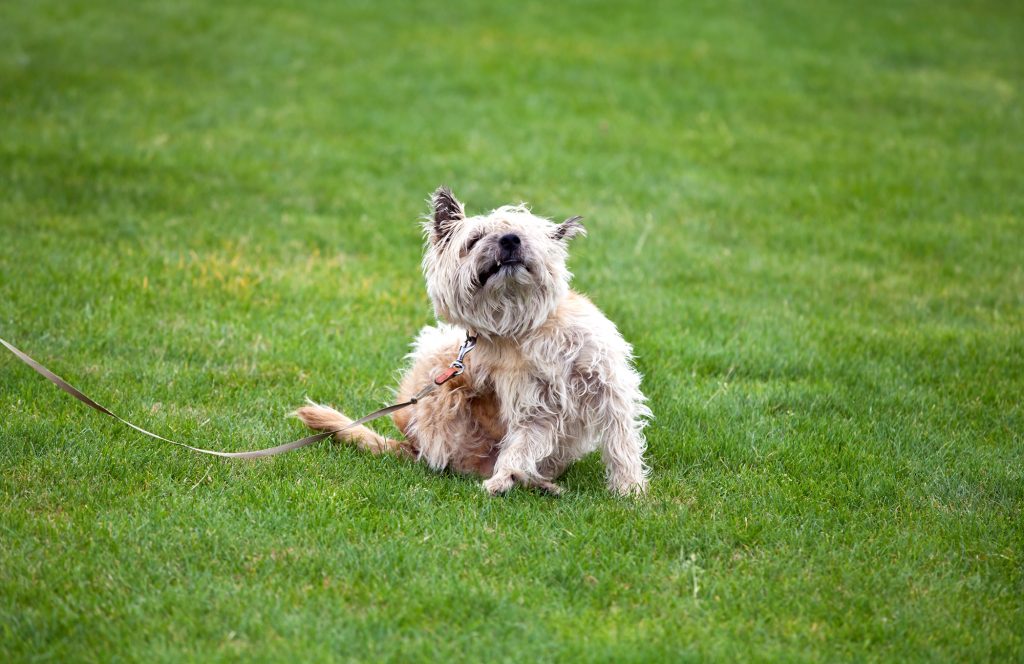 Fleas flourish in warm, humid climates, so depending upon where you live in the United States it could technically be flea season all year-round for you. States on the west coast and along the southern border, like California, Texas, and Florida, all experience year-round flea seasons; whereas central and northern states like Colorado, Minnesota, and Ohio, get a bit of reprieve during the winter when it’s cooler and drier.

If you’re asking yourself, “when does flea season start in my state?” check out this nifty flea season map from the AKC.

Regardless of where you live, it’s a good idea to keep your dog on a year-round preventive flea medication recommended by your veterinarian. You don’t want to risk your dog (or your house) getting infested with fleas because once they’ve taken up residence in your home or on your pet, they’re difficult to get rid of.

Fleas tend to hide in heavily wooded areas waiting for an animal to walk by they can jump on, so preventive measures are especially important if you like to go for woodland hikes with your dog. Once they hitch a ride on your pup, they burrow through their fur and latch onto their skin. Adult fleas can bite their host up to 400 times per day and female fleas lay 40-50 eggs after each meal—that’s thousands of eggs in a flea’s lifetime!

The flea eggs tend to drop off of your dog’s body and hatch all around your house, which can lead to a serious (and costly) flea infestation. If you already have a flea problem in your home or just want to avoid this scenario altogether, we encourage you to read our flea prevention guide where we cover the best ways to kill fleas on your dog and in your home.

How to tell if your dog has fleas

It’s not the bite, but the allergic reaction to it that causes your dog to get itchy. Some pets are hypersensitive to fleas and may suffer a severe reaction from just a single bite. However, all pets will experience discomfort in the event of flea bites. So as soon as you see repeated scratching, suspect fleas.

To confirm the presence of fleas, check your dog’s fur. Use a fine-tooth comb, such as a specialized flea comb, to look for “flea dirt.” In more severe cases, you might also find the bugs themselves.

Flea dirt, which looks like black pepper, is visible to the naked eye, though you may have to look close to the skin on long-haired dogs. “If you’re unsure whether flea dirt is present, the black specks can be dampened to see if they turn red. If they do, pet owners should carefully comb their pet’s fur to remove dead hair and debris,” explains master groomer Nicole Kallish.

All about fleas: what you need to know

Fleas have been around for thousands of years and have been responsible for some of the worst outbreaks of disease the world has ever seen—like the modern plague. These tiny, wingless, blood-sucking parasites would jump from dead rats to human hosts and transmit the bacteria, causing massive sickness and death.

“If there is a flea issue in the household, it’s usually the cat that’s the issue.”

Nowadays, fleas prefer our furry friends to humans, and also prefer cats to dogs. Keep this in mind if you live in a multi-pet household, especially with an outdoor cat.

“If there is a flea issue in the household, it’s usually the cat that’s the issue,” explains California veterinary dermatologist Dr. Nicole Eckholm. “If there are stray or feral cats in the neighborhood, they can be the source of the problem.”

The diseases fleas transmit can be highly contagious: Plague has a high mortality rate if left untreated but there have been fewer than 1000 confirmed cases in the U.S. in more than 100 years. Fortunately, it is treatable in humans with antibiotics, but it’s our responsibility as pet parents to makes sure our dogs are protected, too.

There are four stages in the life cycle of a flea: egg, larva, pupa, and adult. Fleas thrive in warm, humid conditions—long, cold winters are their nemesis. The prevalence of fleas really depends on the climate where you live.

“Any of the milder climates that have shorter winters will have more fleas in their environment,” Dr. Eckholm says. “Places like The South and California are more likely to have pets develop flea allergies than dogs who live in Michigan where the cold, cold winter kills the whole flea population.”

Mainly, fleas exist as eggs and larva, waiting protected in their cocoons for the optimal moments to hatch, which is usually when a dog or cat walks by. Just a single flea can cause problems, at least in flea-allergic dogs. One flea can bite 20 to 40 times per hour!

“It would take a huge number of fleas to cause problems in a dog that is not flea allergic,” Dr. Eckholm clarifies. “And if that’s the case, you’re going to be seeing them on your dog.”

The increase of carpeting in homes has made flea problems worse, and infestations have been harder to eradicate. Regular washing of bedding in hot water and vacuuming with a powerful vacuum can help reduce the number of eggs and larvae around the house.

This is Jemma, a San Diego shelter dog who had severe flea allergy dermatitis. Today, she’s doing great. Her fur has grown back and she’s being treated with a monthly flea preventive.

Flea allergy is one of the most common conditions afflicting dogs today, and one of four main types of allergies typically found in dogs. We’ve already detailed the signs and treatments of environmental allergies, but now we’re talking fleas.

The symptoms of flea allergy are similar to environment allergies:

But the biggest distinguishing factor between environmental allergies and flea allergies is the location and distribution of the itching.

The difference between an allergy and regular flea bites

“It takes a very low number of bites to cause a reaction in flea-allergic dogs,” Dr. Eckholm explains. “With flea-allergic dogs, you won’t necessarily ever see fleas or flea droppings because those dogs are allergic to the saliva from the flea bite and when the flea injects that saliva under the dog’s skin, it causes a hypersensitivity reaction.”

Studies show there are more than a dozen different antigens in flea saliva that your dog can react to. The biggest problem you’ll see with flea-allergic dogs is the itchiness, which makes them prone to secondary infections that require antibiotics to treat. But as previously mentioned, fleas can transmit disease to your pet, especially if he’s not protected.

“It’s possible but it’s much less likely for fleas to transmit disease if you are using flea control medication,” Dr. Eckholm states.

Dr. Eckholm does not think skin testing is necessary to diagnose or especially to treat flea allergies.

“A dog should never need allergy testing to look for flea allergy,” Dr. Eckholm says. “And I would never put flea extract in [environmental] allergy shots because flea control is going to work much better with prevention rather than trying to desensitize the dog to it.”

We know that fleas aren’t fun to think about, but being aware of how fleas operate and taking preventive measures to deter them from entering your home could save you and your dog from a flea infestation. 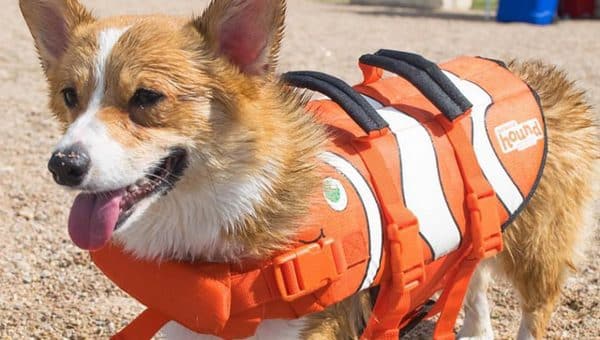 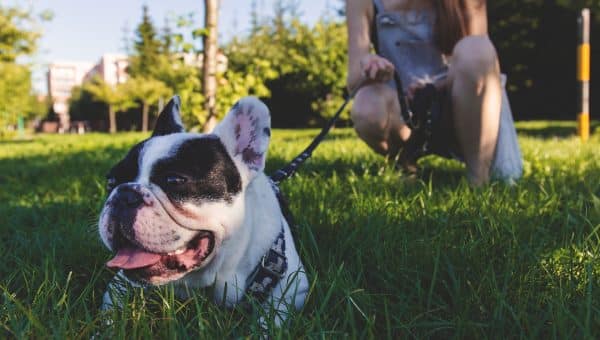 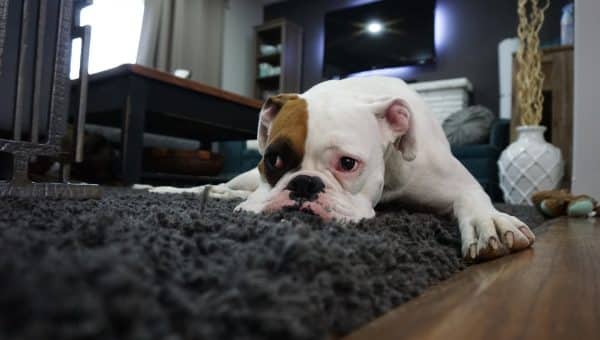