The image of a polka-dotted Dalmatian riding shotgun in a fire truck is indelible in American pop culture and lore, but the story of how they got there is lesser-known. In honor of National Fire Pup Day, we’ve delved into the history, evolution, and enduring legacy of the dogs who keep firefighters company.

From 17th-century carriage dogs to modern-day firehouse mascots, these brave and beautiful canines serve as symbols of the heroic work of their human crewmates, and sometimes, they even get in on the action themselves.

From Carriage Dogs to Fire Pups 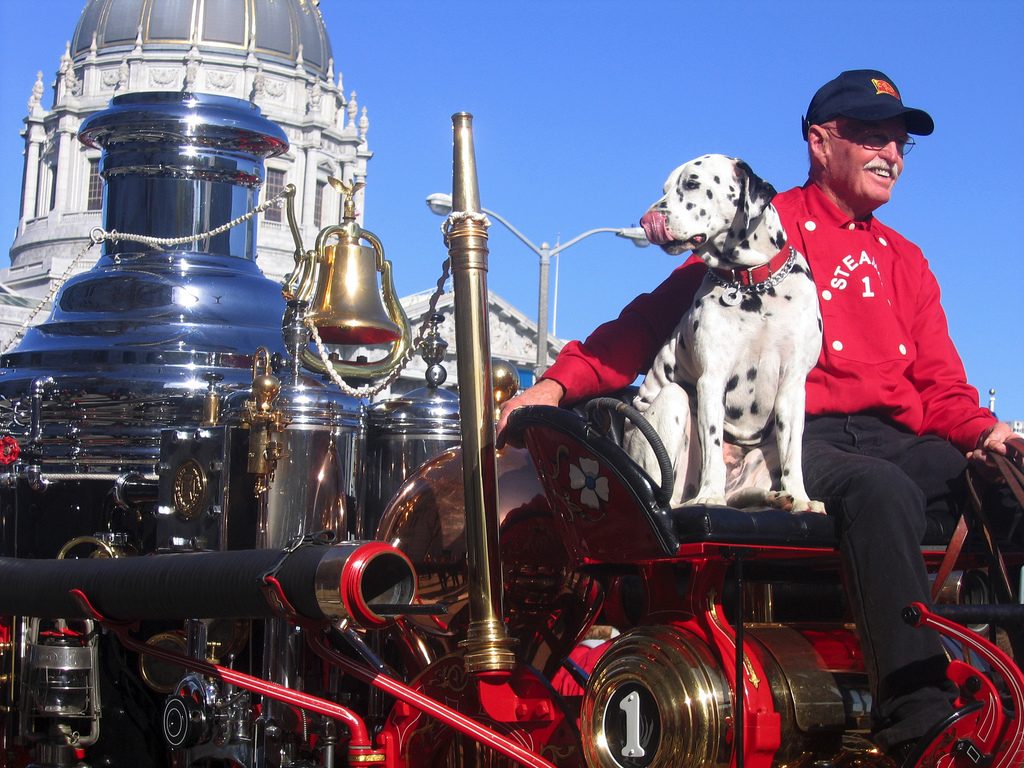 Before there were fire pups, there were carriage dogs. A few hundred years ago, dogs were trained to trot alongside horse-drawn wagons and protect their occupants (and horses) from harm.

Although a “carriage dog” is not a specific breed, certain breeds were more suited to the lifestyle. A carriage dog needed a few key features:

Enter the Dalmatian. According to the American Kennel Club’s Complete Dog Book, quoted on the Dalmatian Club of America website, Dalmatians were the perfect carriage dogs because they have the “strength, vitality, fortitude and size to keep going gaily til the journey’s end.” Dalmatians also happened to have a reputation for getting along great with horses, and it wasn’t long before they became the favored carriage dog among wealthy citizens of England and America.

When horse-drawn fire carriages hit the scene in the late 1700s, carriage dogs became fire pups. Dalmatians were perfectly suited for the job, not only because of their carriage-trailing abilities but their grace under fire. Dalmatians were known to have a calming effect on horses (source), so while firefighters battled a blaze, the fire dog could stay with the horses ease their stress. Back at the station, the fire dog would typically bunk in the stable alongside their equine charges.

Fire Pups in the Age of the Engine 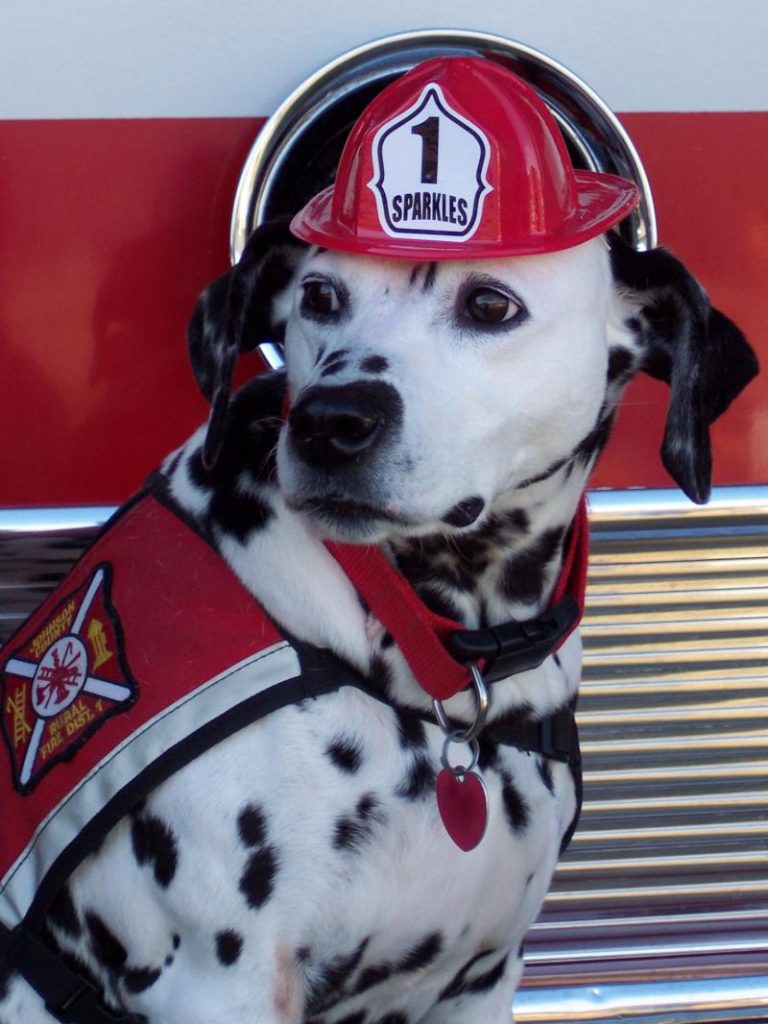 Dalmatians are good with horses, but they’re no match for horsepower! Once motorized vehicles came on the scene, carriage dogs were out of work. But just because the horses were gone didn’t mean the dalmatian was going anywhere, By that point, the public was used to seeing Dalmatians alongside firefighters. Fire dogs needed a new job description to suit the modern age of gas-powered firetrucks.

In the 20th century and beyond, fire stations across England and America kept Dalmatians on-site as firehouse residents and mascots. The tasks of a modern firehouse dog can include:

During the 20th century, Dalmatians and other fire pups also made an important move into education, helping firefighters demonstrate fire safety and emergency preparedness for school and community groups.

For a great example of a modern-day fire pup in action, look no further than Sparkles the Fire Safety Dog, a world-famous ambassador from Clarksville, Arkansas. Sparkles is the main character in her own series of children’s books about fire safety, and she travels the country teaching children important fire safety tips. Sparkles and other dogs like her showcase the enduring legacy of a black-and-white spotted fire dog.

Fire Survivors in the Firehouse 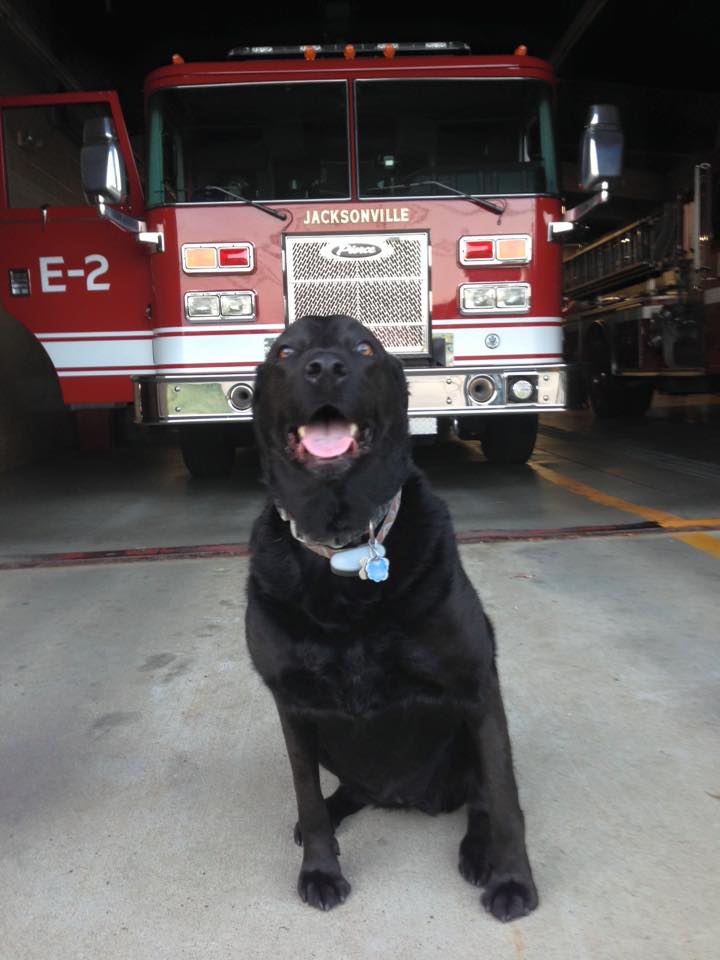 These days, an awful lot of firefighters have pet Dalmatians, and firehouses around the country still have Dalmatians as station dogs. However, Dalmatians aren’t the only dog in the firehouse. It’s become common for firefighters (and sometimes entire fire teams) to adopt dogs rescued from fires. These lucky pups, whatever their breed, become symbols of the resiliency, bravery, and fortitude of firefighters and the individuals they help.

Smokey, pictured above, is a black Lab mix serving as the firehouse dog for the Jacksonville, Illinois department. She was rescued from a house fire as a puppy, resuscitated by a JFD team member, and has lived with the firefighters ever since. She even got to guest star on the television show Chicago Fire! 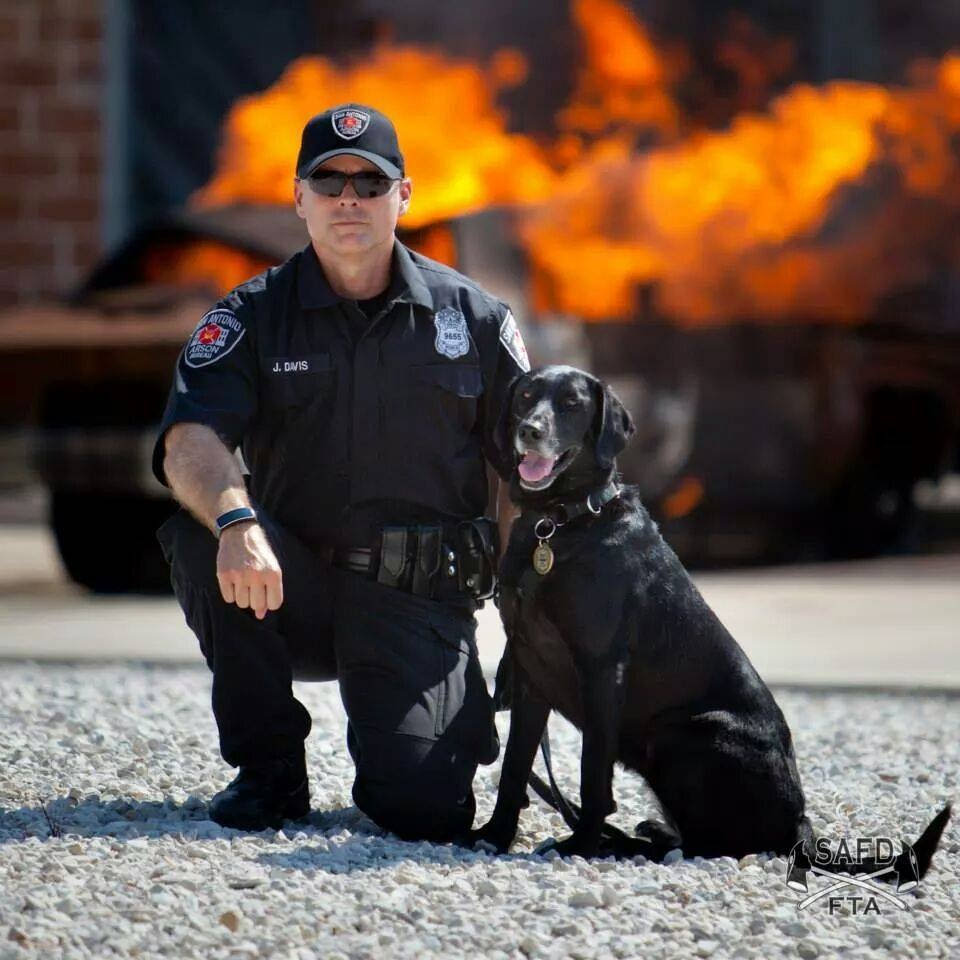 An arson dog and her handler, via State Farm

Firefighting Dogs of the 21st Century

Other dogs take on important fire safety jobs outside the firehouse, such as accelerant-sniffing “arson dogs.” According to the State Farm Arson Dog Program, arson dogs are specially trained to “sniff out minute traces of accelerants (gasoline, lighter fluid, etc.) that may have been used to start a fire.” These super-sniffers are trained and work alongside individual firefighters or law enforcement officers to investigate the scene of a fire after the blaze has been extinguished.

Fire dogs have come a long way from running alongside horse-drawn wagons. These days, a fire dog can be any size, shape, or breed. Of course, dalmatians remain the most popular firehouse mascots thanks to their centuries-old reputation as the perfect fire dog. But whatever they look like, firehouse dogs are a reminder of the advances in firefighting technology, the lifesaving work of firefighters, and the loyalty of man’s best friend.

For another amazing working dog story, check out Jett the avalanche dog.