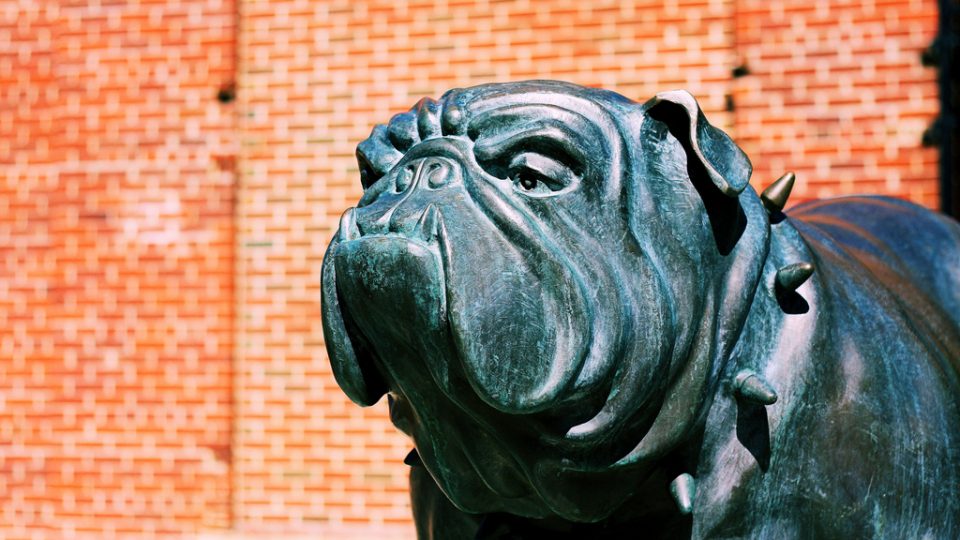 Getting crowds to cheer or consumers to buy—dog mascots are mainstays of our culture. The term “mascot” originally meant a person, animal, or object thought to bring good fortune, like a talisman or lucky charm. Any dog lover can tell you that, even if they don’t believe in luck, our canine companions bring the charm. Here’s a look at some of the most famous dog mascots. Be careful…you might spontaneously applaud.

17 dogs have held the title and position since 1889. You can even see the world through the current Dan’s handsome eyes with the “Dan Cam” at the 2012 commencement.

Just saying the name of this bull dog mascot is fun!

Uga has dominated University of Georgia football games since 1956, proudly sporting team colors and attempting to tackle the opposition.

When it’s not game time, dog mascots can be friendly to the competition. Georgetown University’s famous Jack gives Butler University’s bulldog mascot Blue a campus tour in this video, though they do face each other in a tip off. Who wins?

Starting to think every college has a bulldog mascot? Institutions employ other beautiful breeds, like UConn’s Jonathan the Husky. Check out Jonathan XIV’s “come hither” eyes in his modeling debut.

Michigan State’s golden Zeke has been catching frisbees and capturing hearts since 1978. Originally a labrador, Zeke III is a retriever who wolfs down apples and cozies up to the marching band.

Even the NFC adds to the ranks of dog mascots with their famous friend Gumbo. Many think of a cartoonish man-in-a-suit entertaining fans and children, but Gumbo was originally a real St. Bernard in 1967. I think Reggie Bush’s less-than-subtle message in the video below is for dog lovers: bring back the real thing!

Sports fans often enjoy Bud Lite and other brands while tailgating, so Annheuser-Bush picked an advertising mascot with a tail.

This famous dog mascot enjoyed commercials and controversy when some felt his image aimed the marketing at children. The partying bull terrier retired in 1989. (It also turns out the “happening dude” was a female dog named Honey Tree Evil Eye.)

Target picked up the bull terrier baton in 1999 and made Bullseye their mascot and corporate spokesdog. This white dog with (non-toxic) red highlights has enough personality to upstage the winner of the Indianapolis 500.

Dog mascots aren’t limited to America. Let’s finish our list with a trip to Japan’s amazing white shiba, Otosan, who not only represents telecommunications giant SoftBank but encounters giant squid, an alien Tommy Lee Jones, and a trip into space.

With a mascot dog as your lucky charm for good fortune, it seems there’s no telling how far you might go!