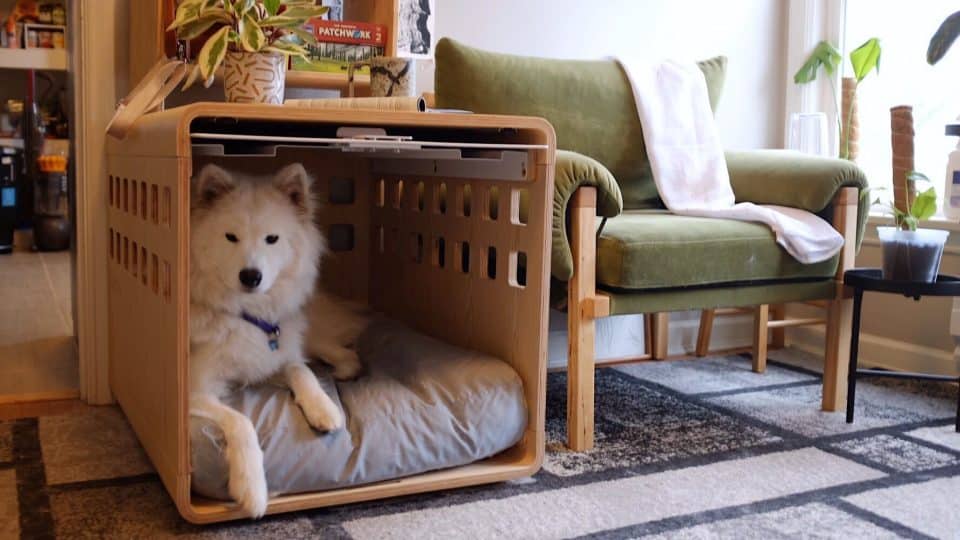 A crate is typically at the top of the list as an essential item for a new dog. But not every pup will adapt to a crate seamlessly.

Skeptical dogs, like my young Samoyed, Meda, can have a hard time adjusting to traditional metal crates. Fighting tooth and nail, she can take an hour to finally settle, only to nap for a mere 15 minutes inside. Even the sound of the metal crate unfolding traumatized her so much that she would refuse to enter any room where it was.

But I needed to crate her, eventually, in order to leave the house. So we decided to test out the luxe, stylish Fable crate to see if it would help give her a zen, den-like experience. Here’s Meda’s review.

Built with an Ikea aesthetic, the Fable dog crate is a smooth, sand-colored wooden crate that’s ideal for pups who are potty-trained and not destructive. Available in two sizes, the crate comes in a small (for dogs up to 25 pounds) and a medium (for dogs up to 50 pounds). It also offers two options for the garage-style door: clear acrylic or white metal. 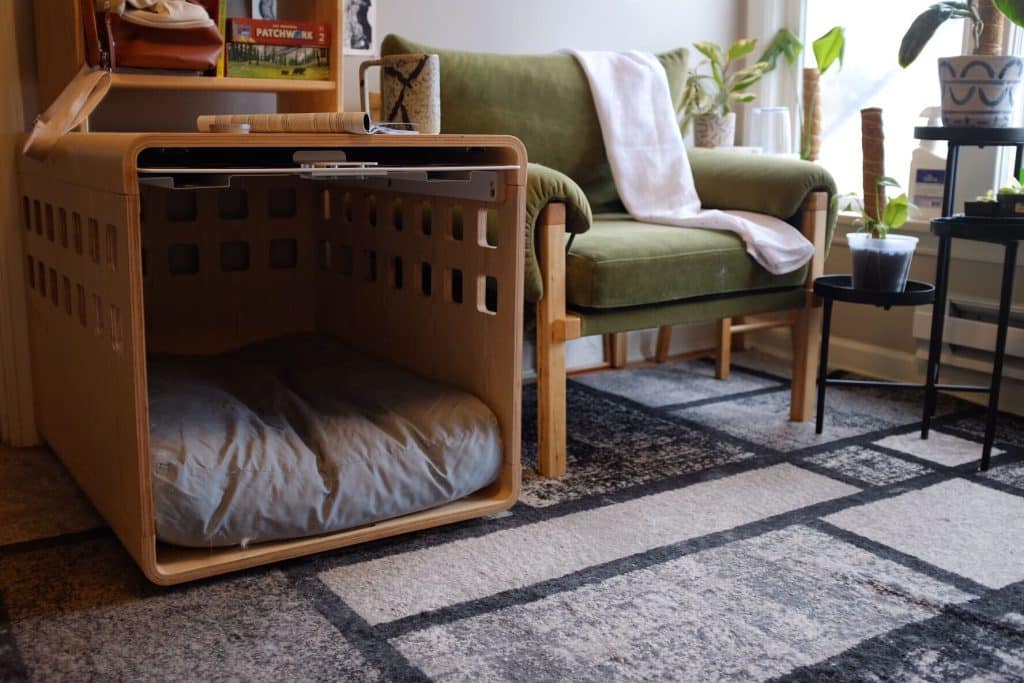 The Fable crate may take up space, but it also serves as a stylish side table.

As with any dog crate, the Fable’s design has varying pros and cons that depend on your dog’s personality, their level of crate training, and what will fit seamlessly into your home.

Since you can’t return the Fable crate, you’ll want to make sure the features align with your dog’s needs and size. (We recommend measuring your pup to determine the fit, as Fable does in their FAQs, rather than going by weight.)

A few additional factors to consider include: 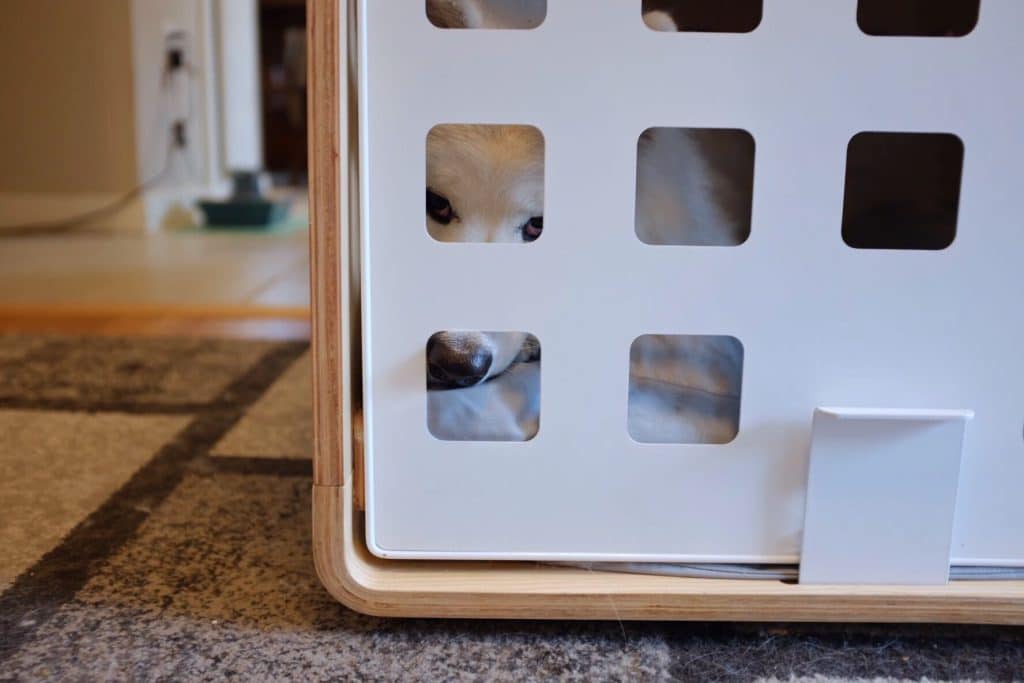 You have to get up and personal to see your dog through the holes.

The Fable crate comes with five wooden pieces that are as easy to assemble as Lego blocks. Screwing the panels together with an Allen wrench, my boyfriend put the crate together in 15 minutes while I took Meda outside to limit her anxiety. The only time he needed my help was to make sure the wooden pieces were aligned.

While most people would be able to put this crate together on their own, the box itself is heavy. And if you live in an apartment building without an elevator, you might find yourself huffing and puffing to carry it up—the unassembled crate can weigh anywhere between 50 to 75 pounds. 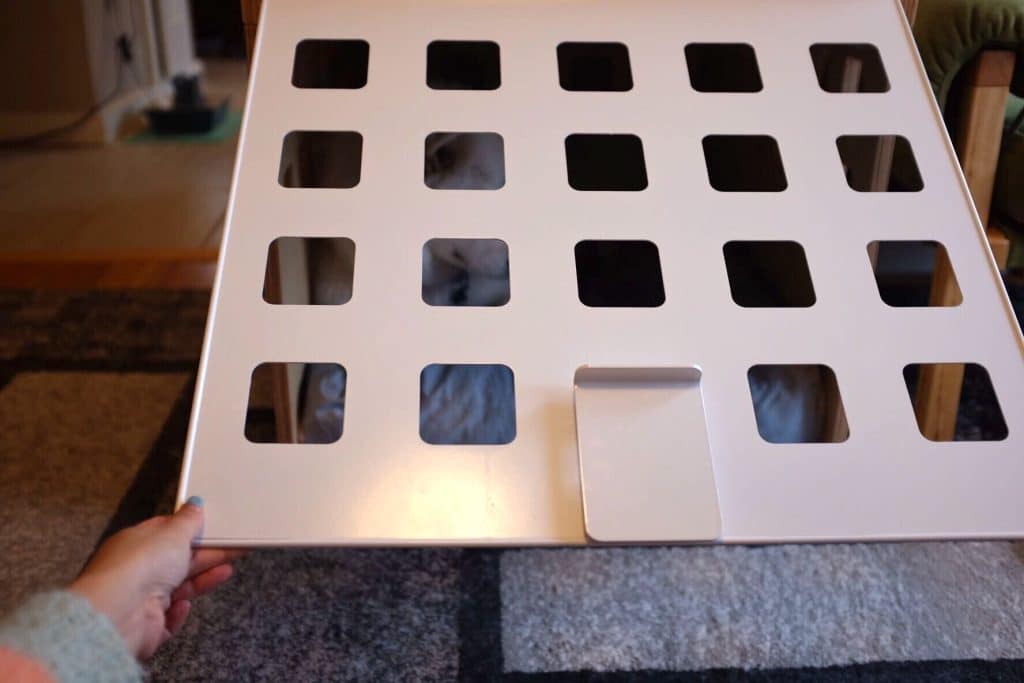 The space-saving garage-style door is one of the best features of the Fable crate.

When put together, the crate is much easier to pick up and carry—but you’ll probably still want to decide where it goes and prepare the space first. We made the mistake of building it and then moving our furniture afterward, which made our pets a little anxious with all the shuffling around.

Once it was in its rightful place, we soon discovered that the standout feature of the Fable dog crate is how quiet and versatile it is for human use. Resting a cup of coffee on top of it doesn’t strike fear into my sleeping dogs the way a metal crate does as it claaaangs.

I can also place plants and additional shelves on top of it without worrying they’ll topple over. Even my cat enjoys sitting on the smooth top of the crate to lord over her dog kin.

I was hesitant to purchase the Fable crate due to the high price. But I figured if Meda didn’t use it, then our senior Shiba Inu, Accio, definitely would since he loves crates. So I measured Meda and opted for the large crate.

This justification, however, didn’t save me from the disappointment I felt when Meda stepped in and stood on the Fable bed, clearly hunched over. Over the two weeks we waited for the crate, she’d grown another two inches—and we didn’t account for how the bed would take up so much space.

So we did a bit of crate training for fun and then let Accio take over. But over the next two months, things changed. 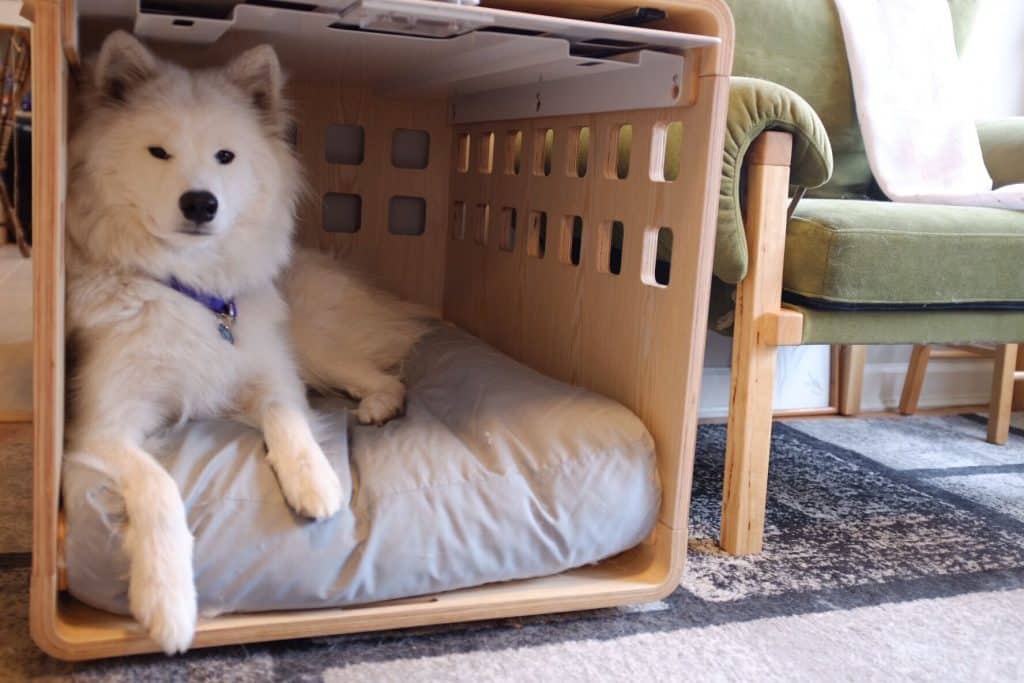 Meda, the Samoyed, enjoying her crate.

As Meda noticed her brother getting rewards for going into the crate, she started running in there too. So I started crate training again and desensitizing her to the garage door coming up and down—leaving her inside a few minutes at a time.

After a month, she started racing into the crate for treats on her own. At one point, we even had to crate her for 20 minutes while we ran an urgent errand. While we were out, I was anxious and worried that she might be panicking. But we came back to a quiet Samoyed who was waiting patiently for us to let her out.

Compared to the metal crates we’ve had, the Fable has been such a painless experience. Granted, Meda has had a lot of crate training (almost 30 minutes a day for over 120 days), but she’s been going in willingly without a single sign of anxiety. One time she even went in for a nap, all on her own. The Fable crate has spoiled her for good! 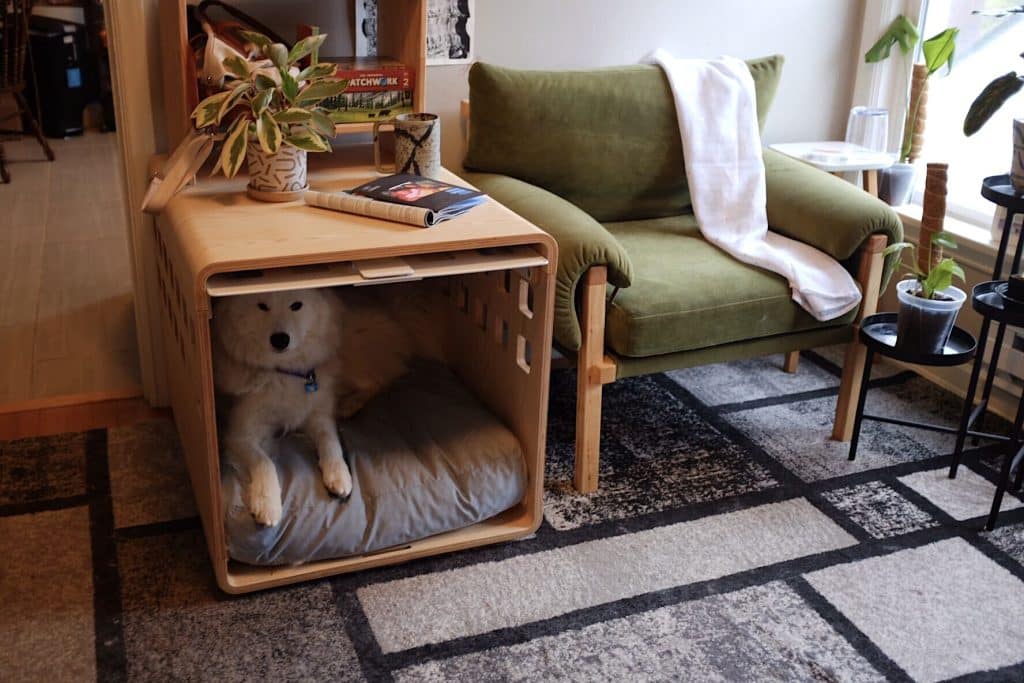 Meda patiently waiting for treats to appear in her crate.

We also tested leaving Meda in the crate for a few hours. She’s had successful alone time in intervals of 15 to 20 mins, an hour, and a little more. But unfortunately, we discovered three hours may be her limit, coming back to chew marks on the crate.

As Fable mentions on their site, this is not a crate for dogs with separation anxiety or destructive/bored chewers. However, we were impressed with the craftsmanship of the crate. Even after Meda tried to chew through, the walls held strong—and I’m glad I didn’t have to worry that she’d cut herself on metal.

While not a crate for dogs with separation anxiety or destructive/bored chewers, the Fable still held up to Meda’s chewing.

Having two dogs who can trade off and both enjoy the Fable crate has made this one of the best pet purchases I’ve made. However, if I had just bought the crate for Meda, I probably wouldn’t have been as pleased with the experience.

Final Review: Is the Fable Crate Worth It?

If your dog is under 24 inches in height and enjoys being in a den-like space, this crate is worth the money. Just make sure you’re confident your pup will use it. Otherwise, there’s a good chance it will become just an expensive side table. 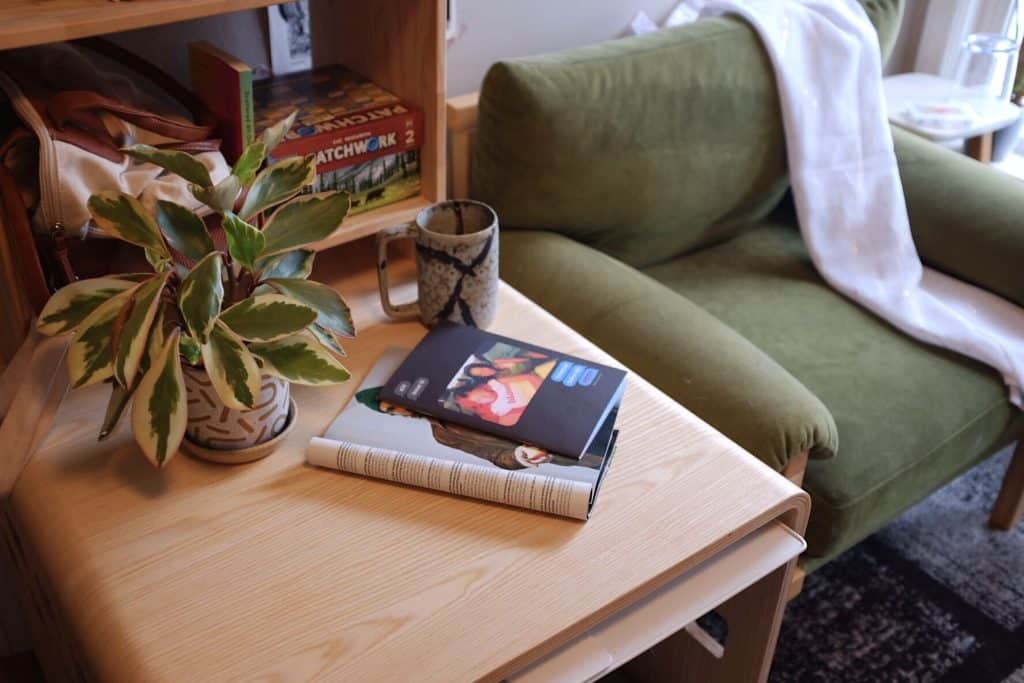 The top of the Fable crate doubles as a small shelf or side table.

In particular, we think this crate would be a good fit for:

Not every dog will be a fan of the Fable crate, particularly:

If the Fable crate isn’t a good fit for your dog, no worries! There are still a lot of other options out there like metal crates, collapsible crates, travel crates, and even puppy crates. Just make sure to take into account your pup’s size and specific needs when picking out a crate. 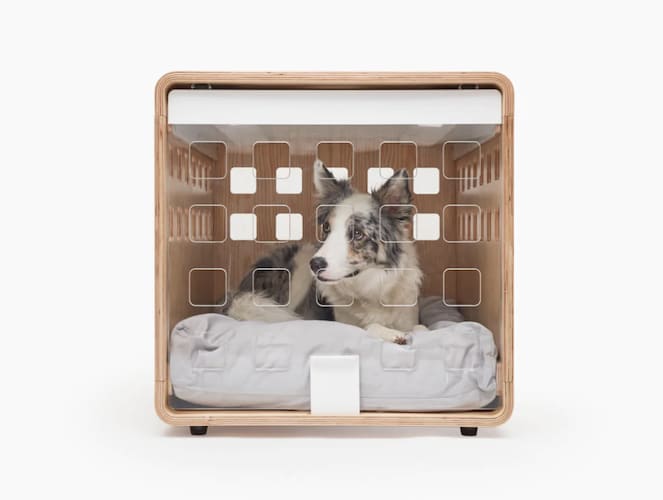 Christal Yuen is an editorial manager at Rover. Thanks to her background in health and wellness, she advocates for compassionate content for everyone — animals especially. She has two dogs whom she loves capturing the art of calm with. 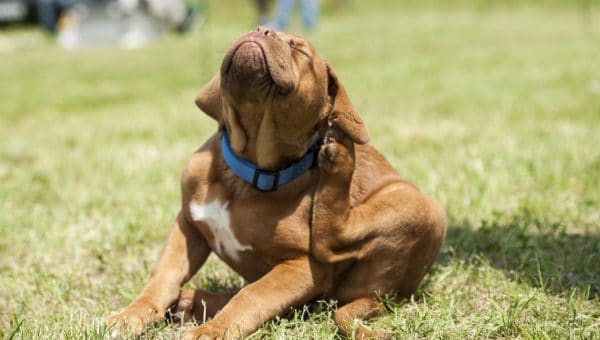 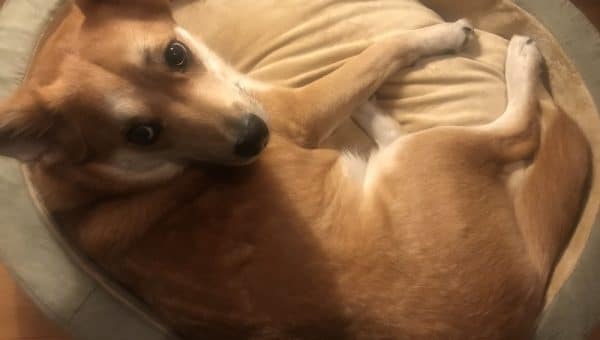