We were shocked and appalled to learn that Sherlock, the adorable Lost and Found beagle of KLM airlines, was a talented actor and not a KLM employee.

To return balance to the universe and restore your faith in dogs, we present to you five dogs doing fascinating jobs in the real world today.

Meet Tucker, a Pacific Northwest dog with a unique talent—sniffing out whale poop for science!

Tucker patrols the waters around the San Juan Islands, following up on Orca spotting reports to spot floating feces up to a mile away.

Researchers collecting the waste can keep track of individuals in pods by DNA, plus get vital information about the whale’s diet, from what and where the whale has eaten to tracing poisons or toxins affecting local pods.

Once upon a time, pigs were the hunting partner of choice for this expensive delicacy. Now dogs of all breeds can be found employed in this esoteric field.

Using a scenting partner is a sustainable method of harvesting the mushrooms which live just beneath the surface of the forest floor in harmony with various species of tree roots.

This dynamic duo of delicacies recently discovered a new species of truffle while leading an off-season expedition in late May.

It’s all a game to avalanche rescue patrol dogs like Yuki, a Nova Scotia duck tolling retriever who works the Alyeska Resort in Girdwood, AK, and Shooter, a golden retriever of Alpine Meadows Resort, in Squaw Valley, CA.

Avalanche rescue dogs regularly practice finding people, clothing, or scent-laden toys in burial scenarios. Their passion for this game is what the ski patrol depends on when a real emergency occurs—and seconds of oxygen count for trapped skiers.

Other important skills for ski patrol dogs include riding chair lifts, snow cats, and keeping up on snow board lingo. 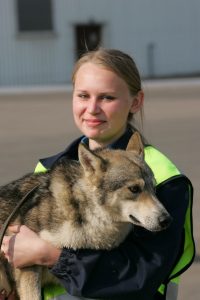 The Sulimov dog is a jackal-dog hybrid created in Russia specifically tailored for work as sniffer dogs in airports by Klim Sulimov for Russian airline Aeroflot.

These designer dogs get a huge boost to initiative and olfactory response from their jackal genes, but retain the size and trainability of their domesticated ancestors.

While the original cross breeding began in the 70s for general sniffery, the Sulimov dogs have been bred and trained specifically since 2001 to detect 12 explosive ingredients which are undetectable to humans—and some of which are even undetectable by technological means!

The wide world of customer service

Shiba-kun opens the window for customers in exchange for petting and treats (but he is watching his weight these days—fame has a price!)

In his off time, he naps in the sunny window and enjoys noshing on the occasional cucumber.