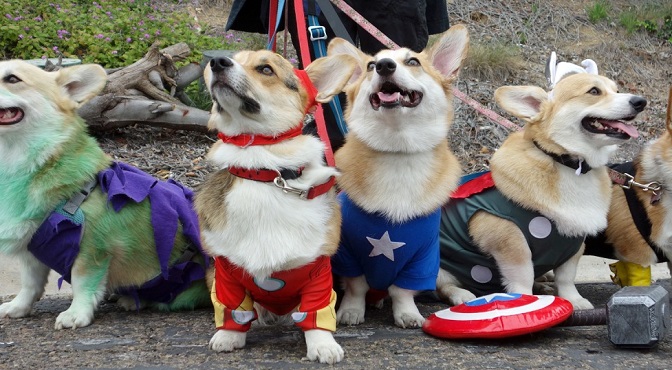 Our four-legged friends can put a whole new twist on our favorite flicks. Seriously, when you see The Avengers recast with corgis, who needs Robert Downey Jr. or Chris Evans? Whether it’s summer blockbusters or award-winning dramas, the cinema leaves unforgettable images in our minds. What could possibly make those movies even more memorable? Dogs!

Creative dog lovers have labored to add legs to feature films (two more legs, to be precise). Check out this assemblage of pooch productions below, escalating from good fun to our absolute favorite: 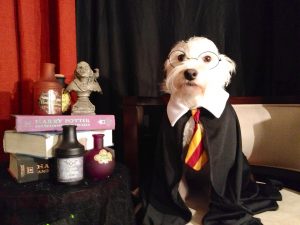 Let’s consider the 8-film franchise of Harry Potter as we begin. Who wouldn’t want to see an all-canine cast with a hairier Harry and his wizened teacher, Doggledore?

10. The Greyhound Strikes Back

As J.J. Abrams prepares to relaunch George Lucas’ beloved franchise with Star Wars: The Force Awakens, why not revisit that classic AT-AT attack from the Empire Strikes Back? This Imperial pooch relentlessly invades the defenseless Rebel plate…

Chris Naka made a headlines splash when he started mimicking movie scene moments with his co-workers dog Wrigley. Recreating romantic moments from 16 Candles and Titanic are cute, but Top Gun and The Graduate get a little weird. Decide for yourself.

8. This Elf is Off the Shelf

Still images and costumes are just the beginning…some of our dog thespians are put through the paces with performances worthy of a canine Cannes. This pug perfectly captures Will Ferrell’s elvish innocence in Jon Favreau’s film. Is he a better buddy than Buddy the Elf? Check out the short film here.

Toby Macguire and Kirsten Dunst gave us an awkward but award-worthy upside down lip-lock in Sam Raimi’s first Spiderman film. This golden retriever dons a red wig to depict that sloppy wet kiss from a whole new angle. It’s a spider-and-pooch smooch!

The heroic adventures of John McClane spawned five Die Hard movies over 27 years, but who needs another sequel when you can reboot the franchise with Pug Willis? Even the rugged Bruce Willis can’t match this furry hero’s hangdog expression.

This Family Has It Ruff

The Wes Anderson favorite The Royal Tenenbaums boasted an all-star cast with Gene Hackman, Gwyneth Paltrow, Bill Murray, and Owen Wilson. Think of the budget costs they might have saved if they’d gone with an all-canine cast!

Pugs seem to be a favorite in these kinds of cinematic recreations, but when we see the regal canine faces of Tyrion, Daenerys, and Jon Snow in this Game of Thrones homage, it’s easy to see why.

Technically, Lady and the Tramp is a movie about two dogs, but the Disney classic is an animated feature. Watching this duplicated dinner scene with real four-legged paramours makes it heartwarming all over again.

Getting the various Avengers to team up in the movie’s story was no easy task…and we see that getting four-legged editions to work together isn’t a walk in the dog park either. This recreation even duplicates that hilarious after-credits scene.

1. We Named the Dog Indiana

As always, we save the best for last: This beautiful beagle does more than raid ancient temples and battle Nazi kittens—he escapes with our hearts! Let’s face it, this is what we all dream our dog is up to when we’re away from the house: saving the world from evil forces, then back home in time for dinner and a nap.

Is your canine companion the next movie star? With a camera, cardboard, and some costumes, you might have just discovered an all new way to bond with your beloved buddy. Get inspired, have fun, and show the world your dog is the hero you already know they are!