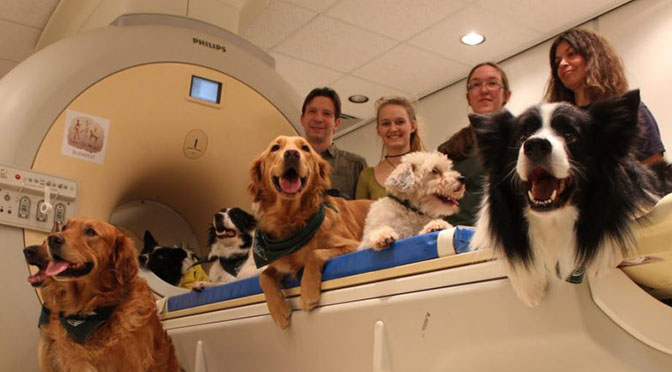 I spend a lot of time talking to my dogs, and I’ve never been under the illusion that they understand much of anything I say, but even my knuckleheads obviously know a few words. “Dinner” causes happy chaos, “Go find” sends Louis off on a determined ball hunt, “Come get a cookie,” brings Bella in from the yard at an all-out sprint (while “Come” by itself is barely acknowledged). Other owners tell me their dogs know plenty of fun words, like park, bully stick, walk (even spelled out w-a-l-k) and cat (even the name Kat.) Some can pick out their favorite toys by name.

We don’t need to put our pets in an fMRI brain scanner to know some of our chatter is getting through, but that’s exactly what researchers at Eötvös Loránd University in Budapest did.

Neuroscientist Attila Andic and his team trained 13 dogs to lay perfectly still in a scanner, no small feat in itself, and measured their brain activity as words were spoken. The results showed that not only do dogs understand the words, they also process speech more like humans than previously thought.

Andic’s study, which was published in August in Science, revealed surprising new facts about how dogs hear us. The results have made waves around the world.

Getting Inside Dog Brains

“During speech processing, there’s a well-known distribution of labor in the human brain,” Andic said, in an article on the University’s website. “It is mainly the left hemisphere’s job to process word meaning, and the right hemisphere’s job to process intonation. But the human brain not only separately analyzes what we say and how we say it, but also integrates the two types of information, to arrive at a unified meaning. Our findings suggest that dogs can also do all that, and they use very similar brain mechanisms.”

Instead of just tossing them a treat after they come in from the yard, say “Good dog” and say it with meaning.

During the study, dogs heard praise words spoken in both neutral and praise tones. They also heard meaningless conjunctions in neutral and praise tones. The scans showed that dogs activated the left hemisphere of the brain for meaningful words only, regardless of intonation. They activated a right-brain region to distinguish tone. The reward center of the brain, which lights up for food or petting, was activated by only the combination of praise words and praise intonation.

Basically, praise words work for a reward, but work better if combined with a praising tone. So instead of just tossing them a treat after they come in from the yard, say “Good dog” and say it with meaning. 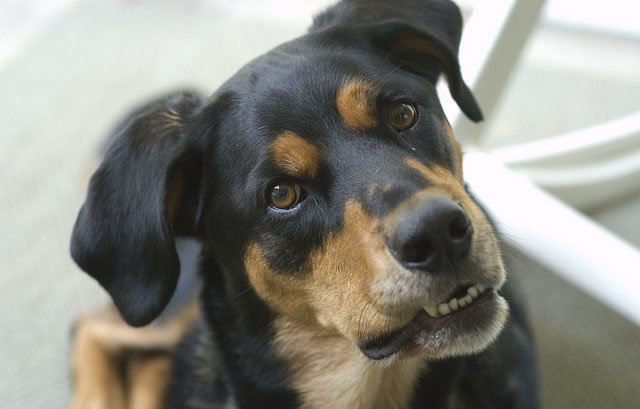 Our Tone = Messing with Their Heads

When my husband cranks his gooey, “good dog” voice up to full power for each pet, those canine brains must be lighting up like Christmas trees. They get the the reward of petting, a bunch of extra-unintelligible nonsense words, and some disciplinary lecturing—all in the super-sappy tone they recognize.  He’s not the only owner who sends mixed signals. Consider these owners describing how they talk to their pets:

Our dogs do understand us—or at least, they understand certain cue words, and they can make the cause-and-effect connection between words and action. But intonation has a lot of power over them, too, and probably more than words alone.