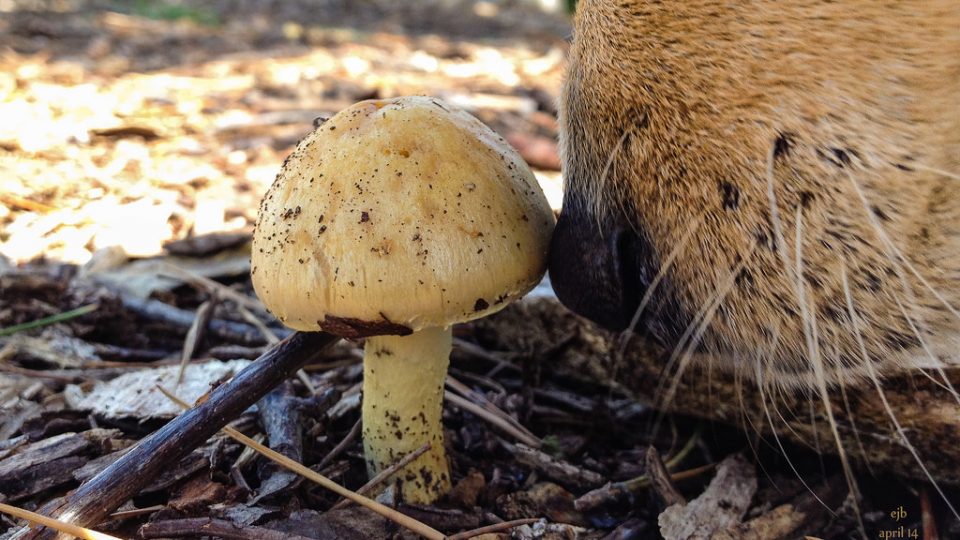 Nothing beats a walk in the woods with your dog, watching them romp back and forth on the trail and sniff at all of nature’s delights. But like fairy tales taught us, the woods can house darkness and danger. If you live near oak trees, your dog may be at risk from Death Cap mushrooms.

Prevalent in U.S. coastal regions, especially in the oak-rich San Francisco Bay Area, the Death Cap mushroom is the number one cause of fatal mushroom poisonings worldwide (source).

Read on to learn everything you need to know about the dangerous Death Cap mushroom, and how to protect your dog from its effects. 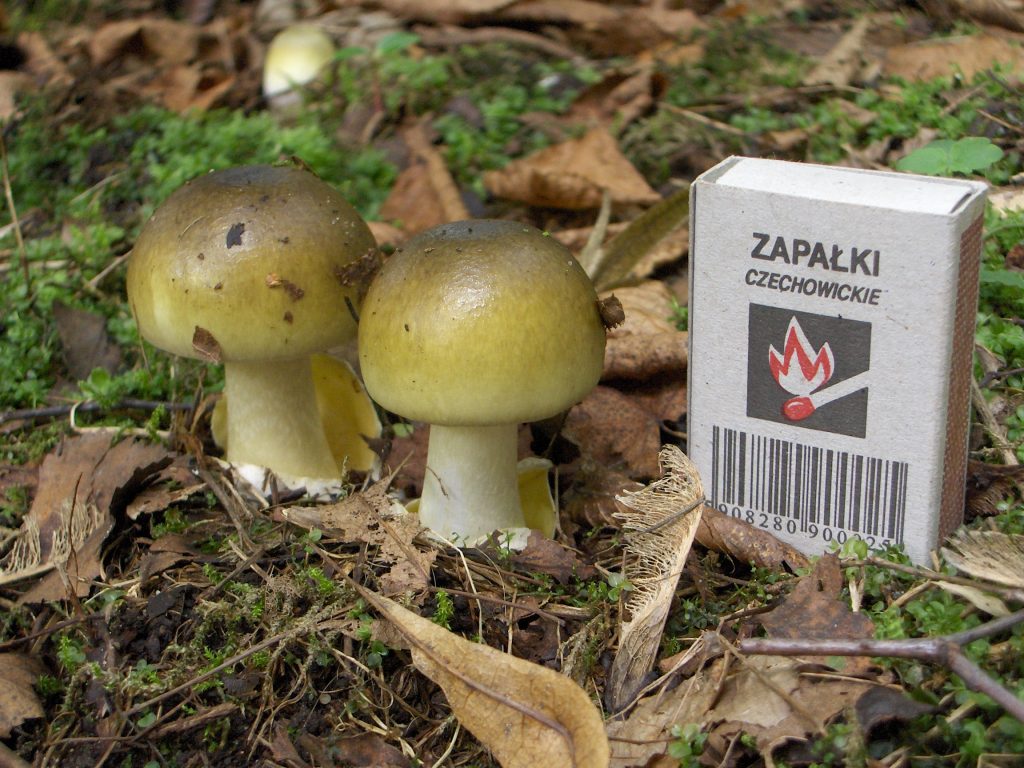 Death Cap mushrooms (scientific name amanita phalloides) are an invasive species that first came to California in the 1930’s, hitchhiking in the roots of imported, ornamental trees (source). From there, they spread out to native oaks. While Death Caps by and large favor oak trees, they have also been documented growing in pines.

Death Caps thrive in cool, damp coastal climates, and are most plentiful during autumn and early winter rainy seasons, when they pop up en masse. While they have been spotted all along the Pacific and Atlantic coasts,  Death Caps are especially common in the San Francisco Bay Area. As one expert said, “Plenty of people have this mushroom in their backyard.”

So why is the amanita phalloide so appealing to dogs? Death cap mushrooms emit a fish-like odor as they decay, making them particularly tempting to dogs and their noses. If your dog is the type to roll around in stinky stuff or gutter-dive for tasty trash, they may be at risk.

Death cap mushrooms emit a fish-like odor as they decay, making them particularly tempting to dogs and their noses.

There have been 6 (six!) cases of Death Cap poisonings in California in the past 2 days. They are abundant this year, please make sure you know how to identify them before eating wild mushrooms. See link in comments. #deathcap #amanita #phalloides #poisonous #toxic #psa #wildmushrooms #foraging #deadly #danger #mushroomidentification

A post shared by Redwood Coast Mushrooms (@redwoodcoastmushrooms) on Dec 6, 2016 at 1:32pm PST

Although your dog has the advantage when it comes to sniffing out the fishy Death Cap, you have the benefit of better eyesight. Knowing what the Death Cap mushroom looks like can help you protect your dog.

Death Caps typically grow near oak trees, so keep your eyes peeled as you pass oaks. They resemble some other mushrooms,, but here are the distinct visual characteristics of death cap mushrooms:

Like a lot of mushrooms, Death Caps change in appearance as they grow and age. Novices can have a hard time identifying mushrooms correctly. To be safe, don’t let your dog eat any mushrooms in the wild.

It’s awful to think about, but knowing how Death Caps poison the system may help you save your dog’s life.

Death Cap mushrooms contain amatoxins, which interfere with DNA and RNA transcription and selectively affect the rapidly replicating cells of the gastrointestinal (GI) and renal systems (source). In simpler terms: amatoxins really mess with your dog’s guts, and can lead to liver failure and death if not treated ASAP.

Signs of Death Cap poisoning develop between six and 20 hours after ingestion, and include:

Unfortunately, once the symptoms appear, it can be too late for your dog. That’s why prevention and early detection are key in protecting your pet from mushroom poisoning.

Protect your dog from mushrooms 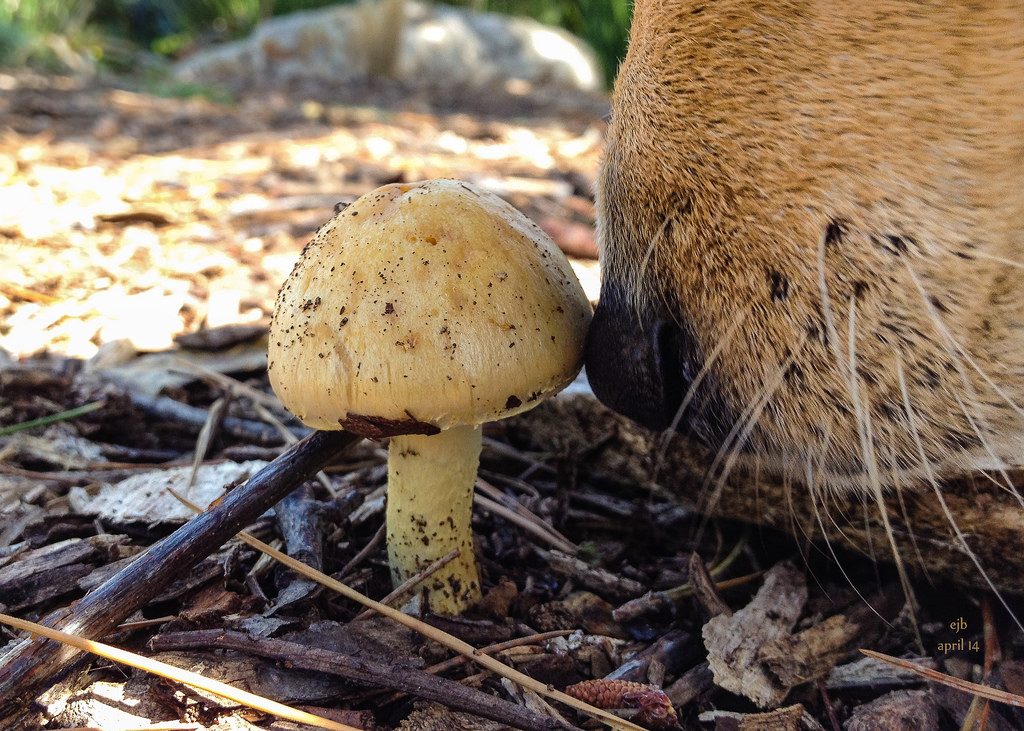 The best way to keep your dog safe from Death Cap mushrooms, and other harmful fungi, is to watch them closely on the trail and make sure they don’t eat anything suspicious. Of course, for some dogs, that’s a lot easier said than done, so be proactive and remove mushrooms from your dog’s path.

Here are a few tips to protect your dog from mushroom poisoning:

What to do if you think your dog ate a mushroom

If you see your pup eat a suspicious mushroom, immediately give them a dose of hydrogen peroxide to induce vomiting (one teaspoon for every 10 pounds of body weight, according to PetMD). This will hopefully expel the mushroom before it has a chance to enter your dog’s system. Making your dog throw up isn’t pleasant, and you shouldn’t do it often, but in this case it might save her life.

Next, get to the vet ASAP. Even if your dog shows no physical symptoms of mushroom poisoning, if you suspect they ate a mushroom, it’s vital to seek treatment right away. If you can, take a sample of the mushroom with you for testing.

Nobody wants to think about their dog being poisoned, but by knowing what toxic mushrooms look like, you can protect your pet. The good news is, the vast majority mushrooms are non-toxic. According to the North American Mycological Society, 99% of mushrooms have little to no toxicity.

To keep your dog safe from the 1% of mushrooms that are toxic, don’t let her eat mushrooms on the trail, and learn the signs of poisoning. With knowledge and a little bit of caution, you can enjoy hiking the coast with your dog for years to come.