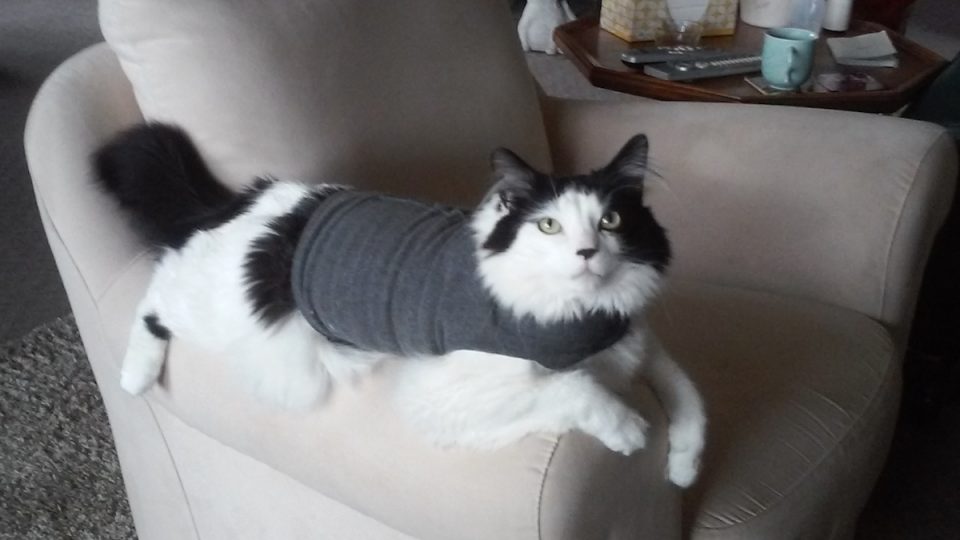 You’ve probably heard of the ThunderShirt: a pressure wrap with a borderline miraculous ability to calm pet anxiety. They’re popular among dog parents, especially those with situationally nervous pups—like my friend Ellen’s Keeshond, who fears thunderstorms and neighborhood fireworks unless he’s wrapped up. Now a cat ThunderShirt is available for our feline friends—and some cats just love them.

For Ferris Bueller, a badly abused Norwegian Forest cat, a ThunderShirt was a true lifesaver. He’d failed three foster placements before my friend Sarah got him and fitted him with a ThunderShirt. The wrap enabled her to address his anxiety issues and even train him to walk on leash.

“The gentle compression literally affects his nerves, and he is less manic,” Sarah says. “I can ask Ferris if he wants his jacket and he’ll drop down and let me put it on him. It is worth every penny!”

Not all cats take to it, though. Another friend reports that her cat just wanted out of the pressure wrap. “He’d prefer me to be in it with him,” she concluded.

So what does a ThunderShirt really do for cats, and would it help yours? We explore the science behind the popular wraps and offer a few ways to tell whether one might be a good fit for your kitty.

The Science Behind ThunderShirts 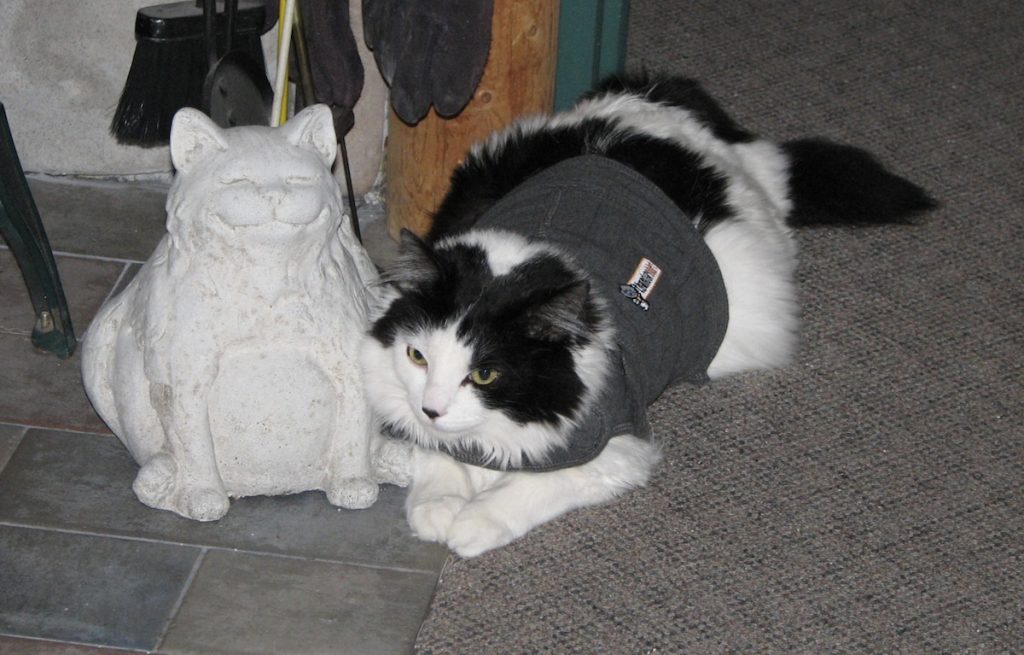 The ThunderShirt, a vest-like wrap, puts gentle but firm pressure on your pet’s chest and back, much the same way swaddling cloths work on human infants. In dogs and cats, that pressure can release endorphins, a pleasant feeling that offsets fear and anxiety. You can use it in just about any situation where your cat is likely to feel anxious: to calm your cat before putting them in a carrier, when a storm is approaching, or when fireworks are imminent.

The ThunderShirt was invented by engineer Phil Blizzard, whose Goldendoodle, Dosi, was frightened by storms. A friend suggested swaddling the dog the way people swaddle babies for comfort. So one night, with a storm approaching, Blizzard and his wife used a t-shirt and duct tape to fashion a comforting wrap for Dosi. It was a success. The pup, who usually shivered and hid during a storm, settled down. Fast forward a few years: Blizzard and a group of his friends formed the company that would produce the ThunderShirt.

A study in the Journal of Veterinary Behavior conducted by a group that included animal scientist Temple Grandin concluded that it works for some pets and “can be used with behavior modification programming and medication as an adjunct treatment option to assist dogs diagnosed with anxiety disorder to reduce heart rate.”

Do ThunderShirts Work for Cats?

Cat ThunderShirts came on the market a few years ago due to demand: some cat owners were buying the smallest sizes offered for dogs. It wraps snugly around a cat’s torso, providing a sensation of light, constant pressure.

A lot of cats have a funny initial reaction: once the ThunderShirt is on, they’ll flop over or slump onto one side like their bones have turned to jelly (and the internet has taken note with a series of videos documenting the effect).

Not to worry, though—they’re just getting adjusted, according to ThunderWorks. With a little time and encouragement, most realize they can still move about freely.

But for some, the adjustment period is difficult. Reviews of the ThunderShirt tend to be polarizing: for some cats, a pressure wrap makes a stressful situation worse. For other cats (and their grateful owners), it brings blissful relief.

So how do you know if your cat might be a good candidate for a ThunderShirt?

First, you’ll want to consider what kind of anxiety your cat experiences. If they feel generalized anxiety—a constant state of stress that isn’t triggered by changing environmental factors—then it’s worth consulting your vet, both to rule out underlying medical causes and to see whether your kitty might benefit from more behavioral and medical strategies. A ThunderShirt might help, but it’s probably not your first stop.

Where a ThunderShirt really shines is with situational anxiety, where your cat’s anxiety has an identifiable trigger that you can anticipate. Fireworks, loud appliances, new people, and trips to the vet are usually high on a kitty’s list of least-favorite things. A ThunderShirt can help offset anxiety with positive feelings and endorphins that make these experiences a lot more bearable. 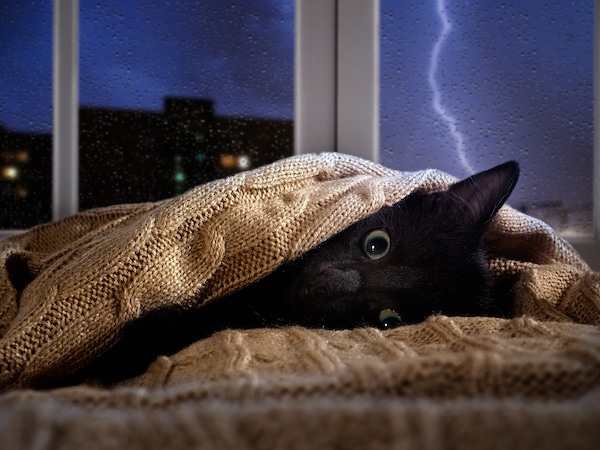 Another good indicator that your cat might like a ThunderShirt is what they do when they’re scared: if holding and comforting them helps, there’s a reasonable chance that a pressure wrap could offer reassurance. If your cat makes for the hills and doesn’t want anything to do with you, that’s a little dicier.

The only way to know for sure is to test it out, which ThunderWorks makes easy with a 45-day return window.

Ultimately, because no one knows your cat like you do, it’s best to make the decision to ThunderShirt or not to ThunderShirt based on what your cat is telling you. If, after the introductory period, your cat is expressing discomfort or stress rather than relief, it’s probably time to add this to the “at least I tried!” pile of cat accessories.

But don’t fret—we’ve listed some additional anxiety-relief options below that might help your shirt-averse cat.

How To Put a ThunderShirt on a Cat

If you’re ready to give the ThunderShirt a try, don’t wait until the fireworks start. The ThunderShirt manual advises an incremental introduction. Let your cat get used to seeing the vest on a bed or the ground. Maybe place a small treat on the folded vest, creating a positive association. Once your cat is familiar with the vest, you can try putting it on them.

Helping a cat into a shirt can either be really easy or really squirmy. Most cats will allow you to slide something quickly over their head, so a great way to approach the ThunderShirt is to loosely fasten the front flaps and pop it over your kitty’s head. That way, if you’ve got a squirmer, you can slowly fasten the other parts and adjust where needed without your cat running off.

If your cat doesn’t like things being put over their head, you can try putting the pressure wrap on from the back. Leave it unfolded and rest it on your cat’s spine, then fasten the stomach clasps first, followed by the chest flaps.

Once you get a cat into a ThunderShirt, it’s recommended you condition them to it with treats, pets, and breaks. Ten minutes is great for their first go round. Using treats, you can work up to longer and longer periods. If you’re planning on keeping a ThunderShirt on a kitty for longer than an hour, it’s a good idea to remove the shirt and check for irritation points. If your needs are greater, the ThunderShirt folks recommend removing the ThunderShirt for at least 30 minutes at least two times per day. 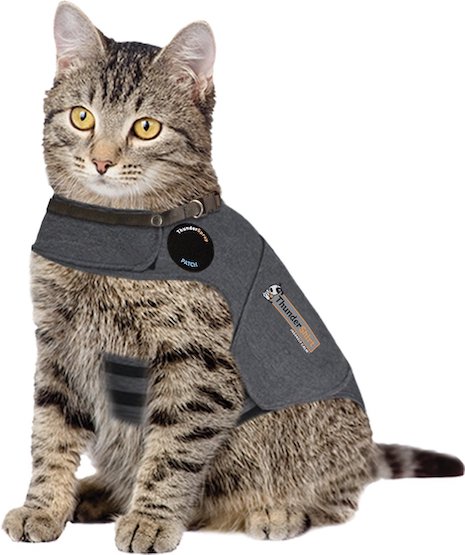 The cat-sized ThunderShirt is marketed as effective for more than 80% of cats. In addition to helping your cat stay calm during storms, fireworks, and other stressful situations, it can help control inappropriate scratching, marking, and meowing. The cat ThunderShirt comes in three sizes. Size up if your cat falls between two sizes.

Shop on Chewy Shop on Amazon

What if a wrap doesn’t work? Some felines, especially those who’d resist wearing any other clothing or harnesses, just don’t take to the cat ThunderShirt. If that’s your kitty, there are other options to try to relieve cat anxiety.

If a ThunderShirt doesn’t work, consider:

However you decide to go about easing your cat’s anxiety, your vet is an excellent resource and can offer both advice and more serious medications if your kitty’s stress persists. We’re rooting for you!

Karen Anderson is a Seattle-based freelance writer specializing in technology and lifestyle topics. Her hobbies include dancing, gardening, science fiction, and pet-sitting for friends and neighbors. She's a member of the Cat Writers' Association and shares her house with a delightful clowder of quirky rescue cats. 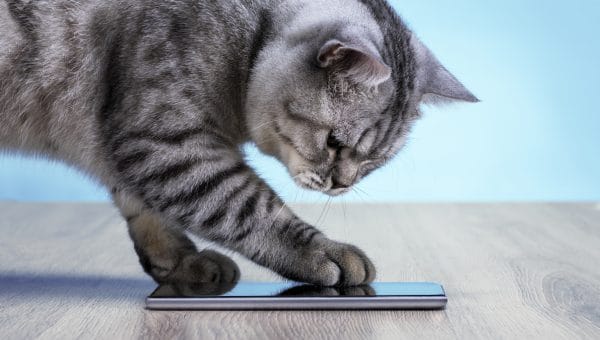