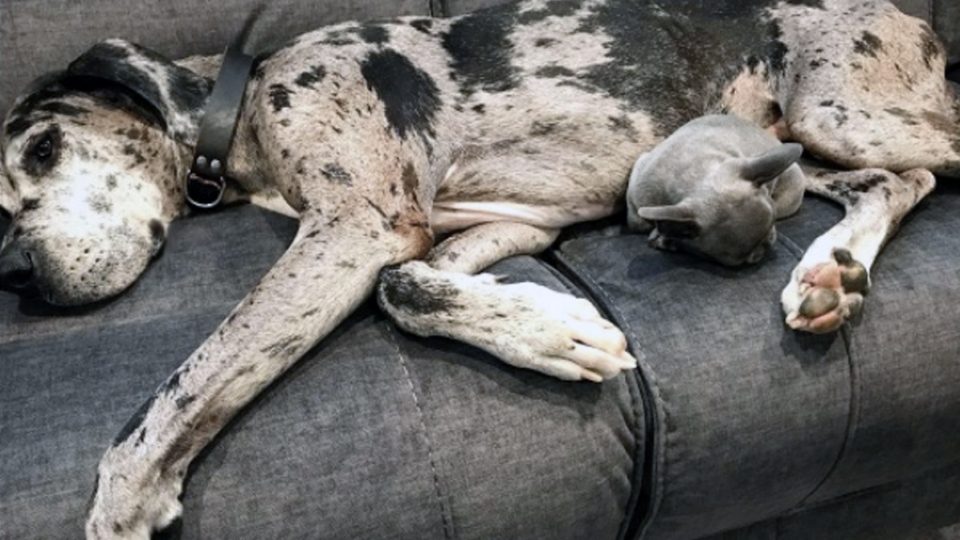 Best Breeds For:
Family companions. Like all dogs (and especially big dogs) keep an eye on them when they’re around kids.

Apartment/House:
Despite their stature, Great Danes are mellow enough to be good house dogs, though they’re probably too big for tiny apartments.

Purportedly, an 18th century French nature writer saw the dog while on a trip to Denmark and dubbed the dog Grand Danois or “Big Danish.” The name stuck even though the breed was likely developed in Germany as a boarhound. Today in Germany, the Great Dane is called a Deutsche Dogge or German Mastiff.

They don’t really need much exercise, especially when they’re puppies. Experts recommend limiting the stress placed on a growing puppy’s joints. Be careful with jumping and jogging. They eat less than you’d expect for their size. They eat about as much as a Lab or Shepherd, but they eat significantly more when they’re young and growing.

A post shared by Ashley Pearce (@bettycrockerofthebackcountry) on Jun 12, 2017 at 8:45am PDT

Prone to: Hip dysplasia, eye and cardiac disease, bloat, and Hashimoto’s disease. Great Dane puppies can suffer from growing pains or inflammation as they grow very quickly. Diet needs to be monitored closely to avoid puppies growing too quickly. If your Great Dane needs surgery, look for a vet who has experience with giant-breed dogs and ask for a pre-surgical blood test that includes a clotting profile. It’s not a test that’s typically done, but it’s a good idea for Great Danes.

Great Danes are big in size—too big for most apartments—but they’re also really big-hearted. They were first bred as superdogs who could help hunt a swift, powerful, tusked opponent: wild boar. It’s also why many Great Danes had their ears cropped; it kept their ears safer when chasing the tenacious boars. Today, Great Danes are still massive super dogs, but their major occupation is being gentle, loving, and affectionate with their families.