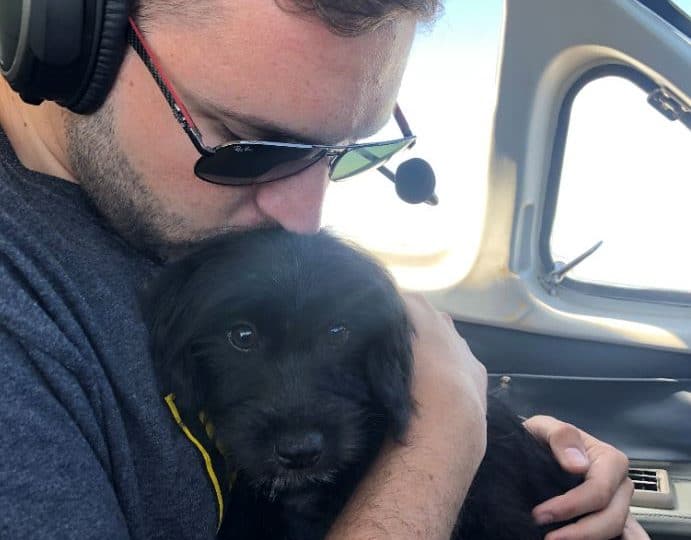 Pilot Julian Javor doesn’t just fly the friendly skies—he makes the skies friendlier by volunteering to transport dogs from high kill shelters to safety. Whether it’s to a rescue shelter, foster home, or permanent home, the man who works in construction and property management during the week, dons his wings for the weekend to help dogs in need.

Those flying skills and his dedication to helping animals came in handy this past June when Javor received a Facebook plea from Debbie Newton of RSQ209, a Valley Springs, CA-based animal rescue group.

“[RSQ209] messaged me and said, ‘We know you’re a rescue pilot and come highly recommended,'” Javor said. They told him about a poodle named Spike who ran away from his home in El Paso, Texas on July 4, 2018, and somehow ended up in Stockton, California a year later.

No one knew how Spike got from Texas to California, but thankfully he was microchipped. Newton asked Javor if he would fly Spike home to Texas. The dog’s family missed him terribly.

Javor didn’t think twice. He planned to foster the dog for a week and then fly him home to his family.

So how did Javor, a true dog lover, start flying animals to safety?

Javor received his commercial pilot’s license in September 2017. While trying to build up his flying hours, he took every opportunity to do so. “I started to look for opportunities that would give me a good reason to fly,” he said.

That’s when he came across Pilots N Paws, a network of volunteers including pilots who help transport animals.

After Javor accompanied a friend who had just received his private pilot’s certificate to fly a dog to a new home, Javor was hooked. “It was exactly what I wanted as far as the challenge,” he said. “It was also incredibly rewarding. The adoptive family was so happy.” 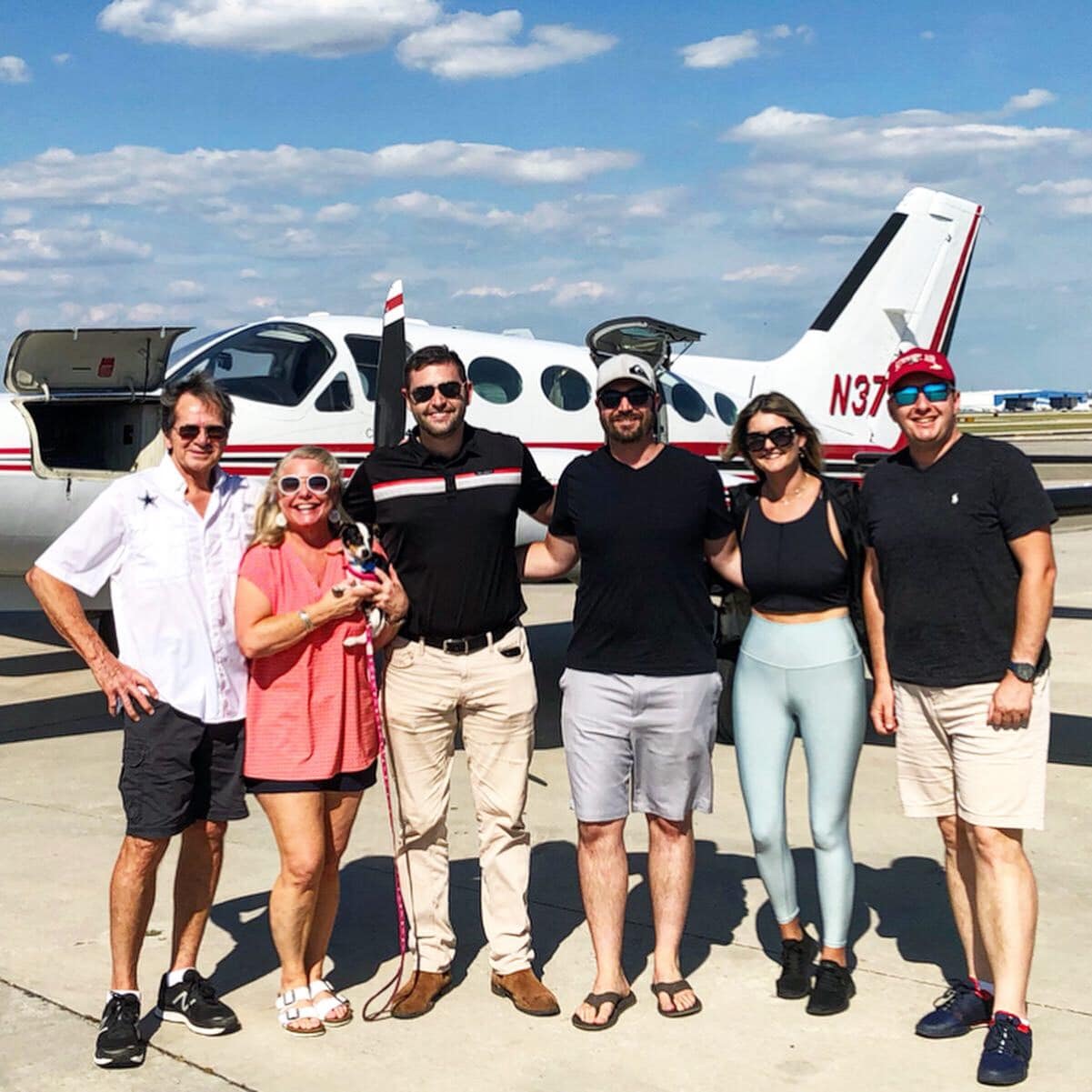 In the beginning, Los Angeles-based Javor flew in a rental aircraft from November 2017 to May 2018. However, the cost was exorbitant. “Throughout that time, I also got my multi-engine rating and started looking at the cost-benefit,” he said. “I thought if I wanted to do it on more of a regular basis, how could I do it cheaper?”

That’s when he found a reasonably priced Cessna 414.  “It opened up the world for me because within two months of having the aircraft I had already flown 26 animals.”

Javor was out of commission from September 2018 to February 2019 due to back surgery, but his contacts in the animal rescue world were eagerly awaiting his return. He started flying again this past February and has flown almost every weekend since, experimenting with longer flights and carrying more animals. 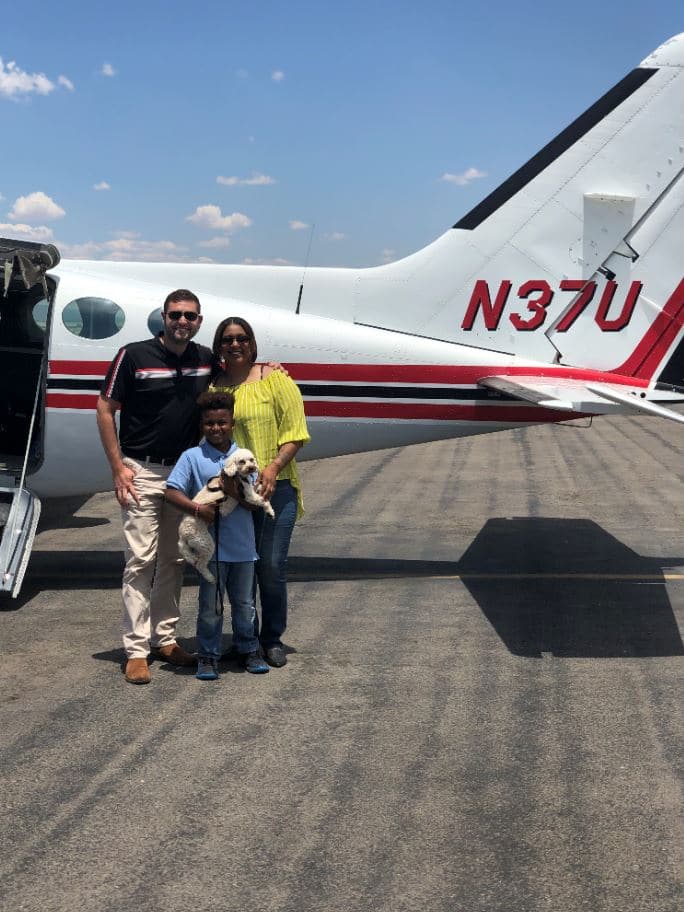 When it came time to fly Spike home to Texas in June, Javor was excited for the opportunity to help. “This would be really cool,” he said. “I saw it as an opportunity to push the boundaries again and see how my plane would do on a flight to Texas.”

Although Spike wasn’t too happy with the hot and bumpy flight, he was excited when they landed because he got to see his family. They were waiting along with the local news. “Spike was immediately aware of who his mom was and jumped right into her arms,” Javor said.

Watch how excited Spike was to be reunited with his family after a year of separation:

7-13-19 I got to fly Spike back to his family in El Paso after he ran away being spooked by fireworks on July 4th, 2018. Somehow he had found himself in Stockton, CA more than 1,100 miles away. Here is the summary story from local news up in Stockton. #pilotjulianj #animals #animalrescue #animalrescuer #animallovers #dogs #cats #rescuedog #rescuecat #dogrescue #catrescue #puppies #puppylove #kittens #catsanddogs #pilotsnpaws #adoptdontshop #freedomflight #shelteranimal #fosterhome #fureverhome #lostdog #founddog

Help for an Arizona Rescue

It was Javor who helped bring two German shepherds from California high kill shelters to an Arizona rescue.

Trisha Houlihan, founder and executive director of Saving Paws Rescue Arizona, received a plea for the two dogs. Artie, who had his leg amputated after being hit by a car, and Maverick were slated to be euthanized. Houlihan was up to take them as long as she could find a transporter. 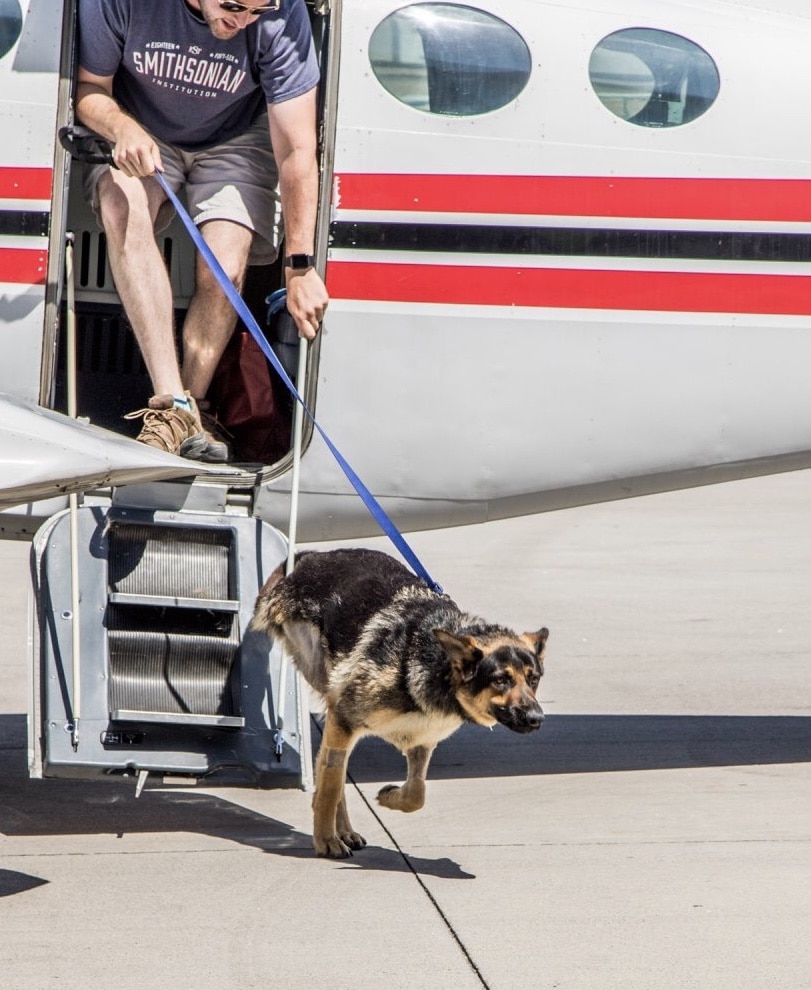 “Trish is very big on the medical cases,” said Michelle Forster, a volunteer with Saving Paws. One of Houlihan’s contacts in California brought Artie to a local boarding facility while Maverick was placed in a foster home. The foster parents knew Javor and reached out to him asking if he could transport the dogs to Arizona. Javor said yes, and they then began arrangements.

Artie was crated for most of the flight, but Javor let him out for a while. “He sat in the copilot’s seat and when he realized he wasn’t on the ground he regretted getting out of the crate,” Javor laughed. 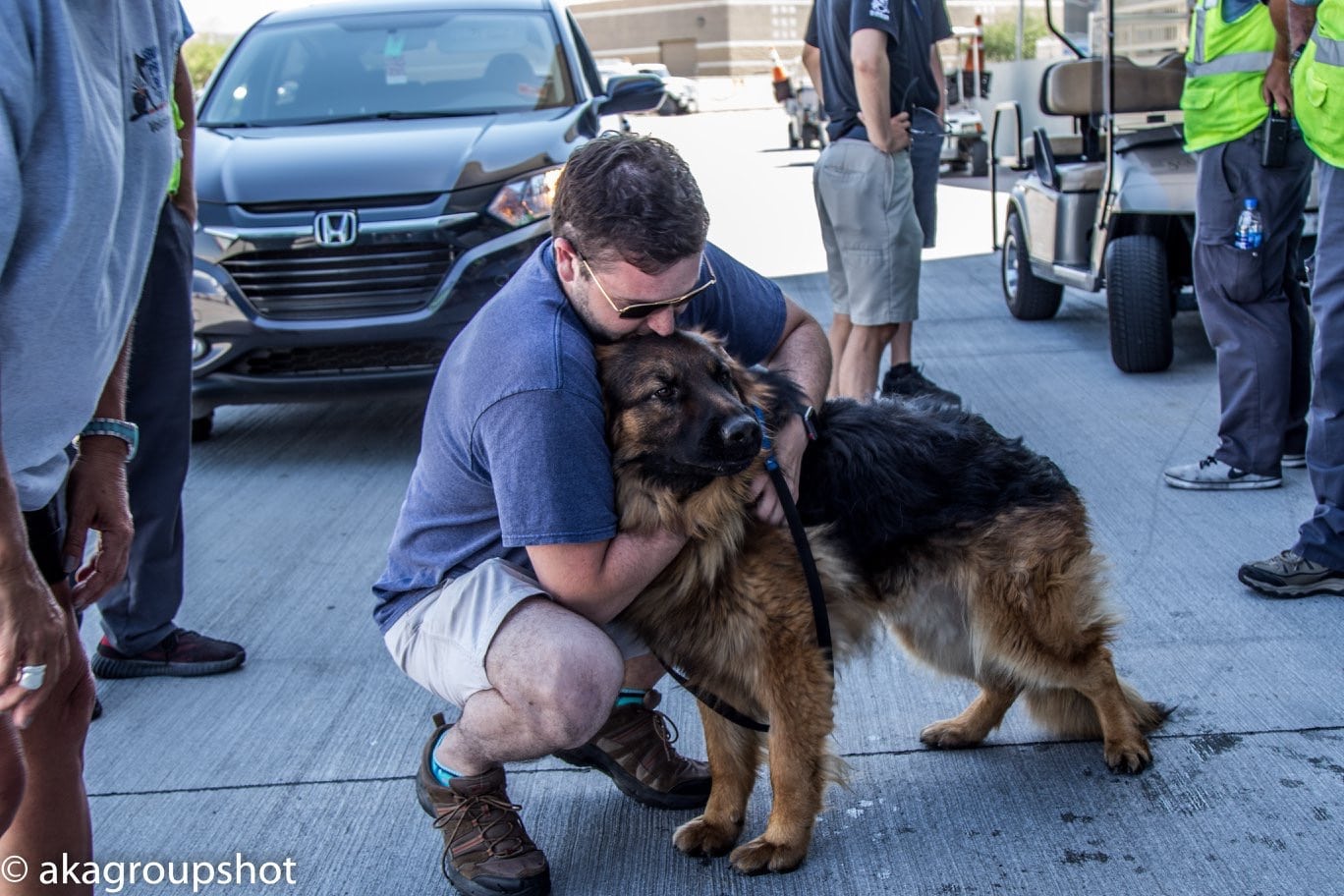 When they landed, Artie couldn’t get off the plane fast enough. The dogs were greeted by Saving Paws volunteers. Forster is happy to report that both dogs were adopted quickly into loving homes. “We cannot thank Julian enough for saving two lives for us,” Forster said.

A Copilot and a Dog of His Own

Javor brings his colleague Victoria Talbot with him on many flights. They met through work and started flying together. She helps with many of the rescue missions. “She’s been with me through thick and thin,” Javor said.

On February 9, 2019, Talbot was on a flight that turned out to be a very long day including eight stops all over California. They had nine dogs and four cats. “Shadow was one of our first pickups of the day,” Javor said. The emaciated dog with pneumonia had been a stray in Fresno, California. 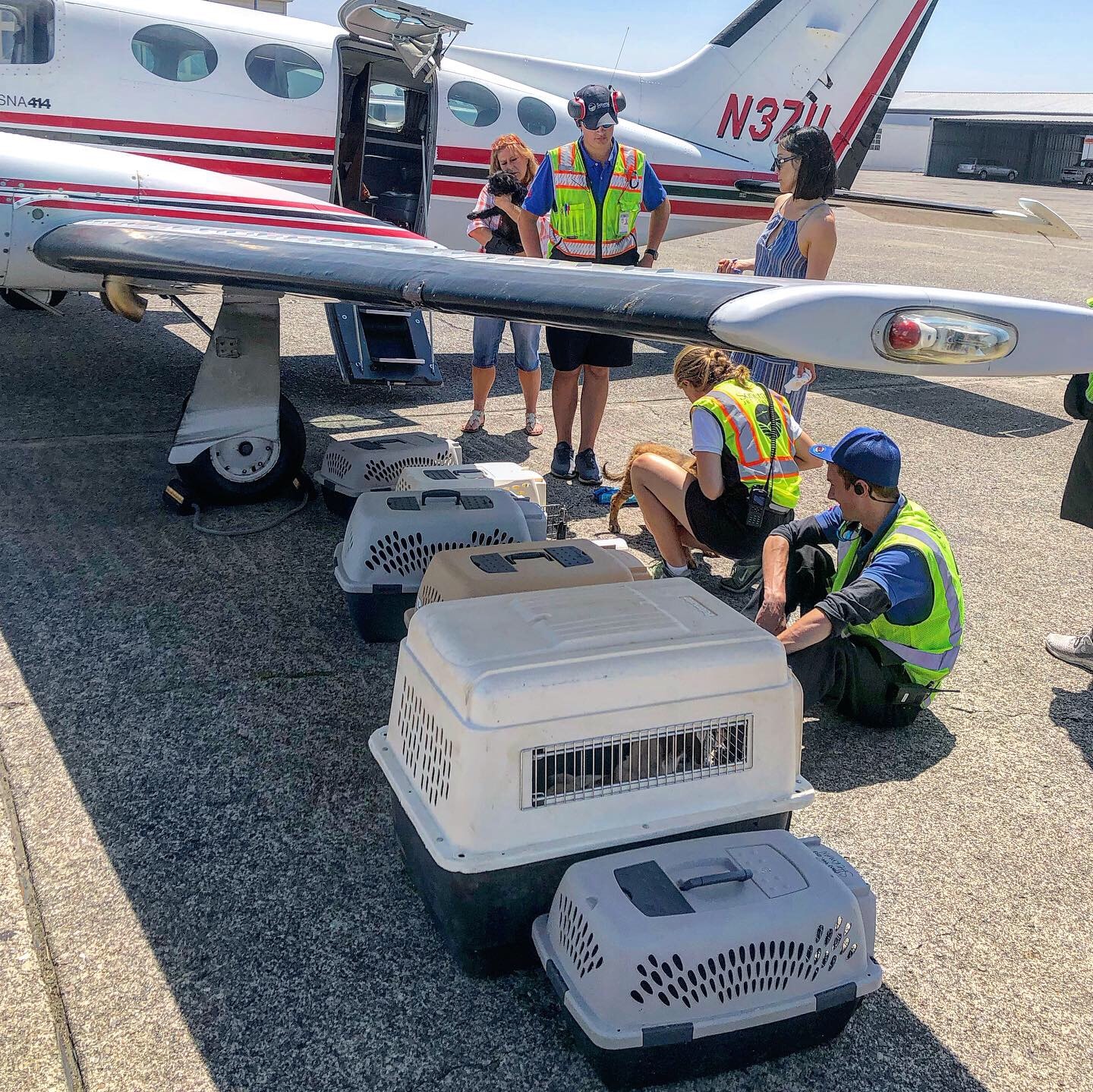 “But her personality was amazing,” Talbot said. “A lot of dogs are shut down. She hadn’t shut down at all. She was lit up and was just such a cutie.”

It was then that Javor said, “Maybe I should take a dog home.”

“If you’re going to take one, this one’s a keeper,” Talbot responded, referring to Shadow.

The black dog was stinky, had no shelter intake papers, and was slated to be euthanized before being pulled from the shelter. Javor and Talbot picked her up at 10 a.m. and she spent the entire day on the plane quickly endearing herself to them.

“She was going to be dropped off in Los Angeles to a rescue,” Javor said. “Around 5:30 p.m., I called the woman who rescued her and said, ‘If it’s possible don’t bother coming to the airport because I’d like to take her home.’”

And the rest is history.

Javor has flown 223 animals to date ranging from six-day-old kittens that had to be bottle-fed to a dog who had been shot in Mexico to Spike the poodle who Javor reunited with his family. Seeing families reunited with their pets is one of the things that keeps Javor going. He believes that Spike along with the other rescue animals know that they have been rescued.

“In California alone, 1,000 dogs and cats are euthanized daily, and there are millions of dogs and cats that exist in the shelter system whose lives are in jeopardy and who are homeless and afraid,” Javor said. “All they want is to receive and give love. So, if people have love in their hearts and space in their homes for these animals they deserve to be given a chance.” 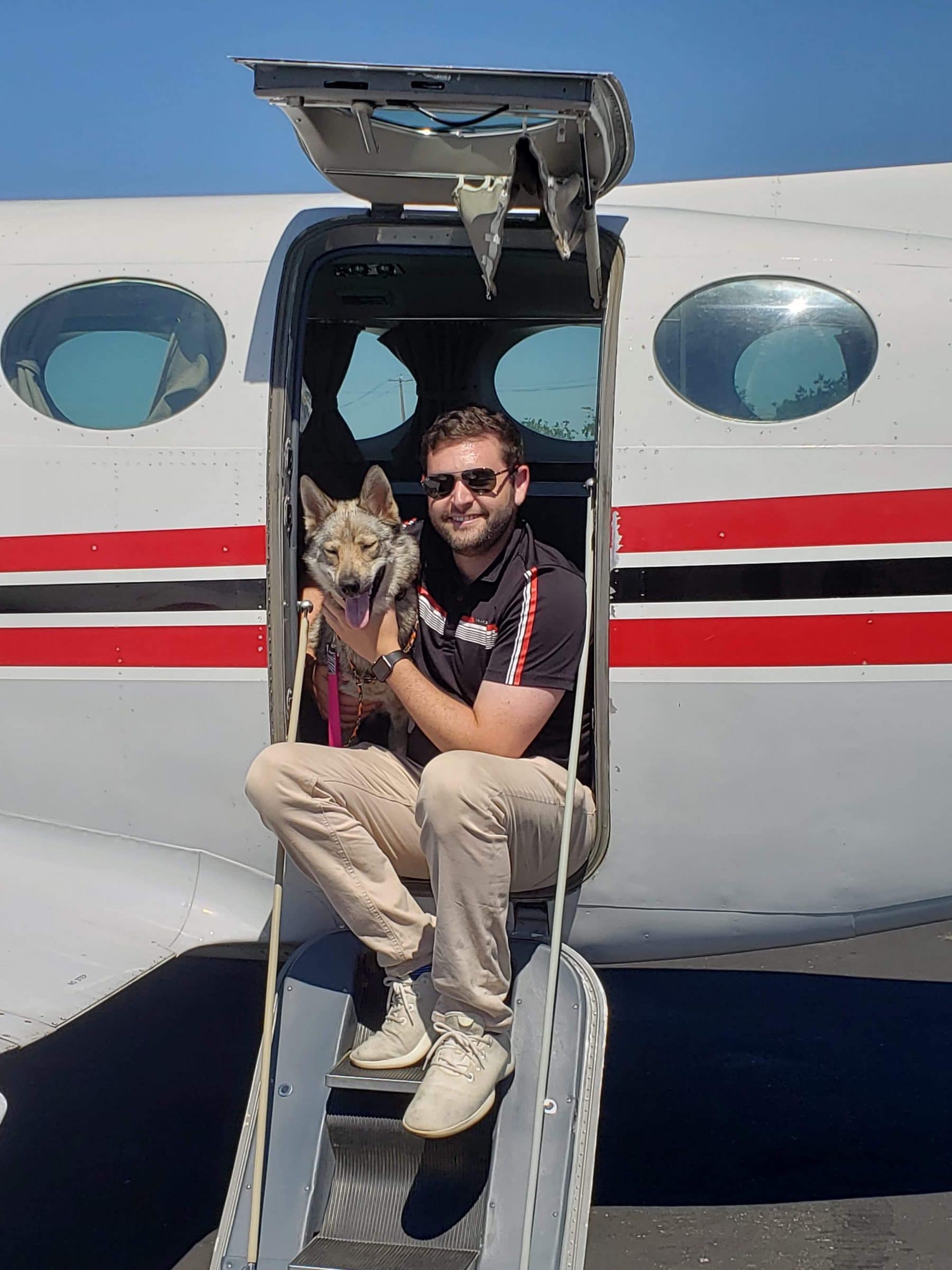 Javor is currently forming a 501 (c) (3) that will be able to accept donations allowing him to fly more and help more animals.

“For me, I am so lucky to have found a way to do what I absolutely love and to do good with it,” he said. “If people took what they love doing and found a way to give back with that the world would be a better place.”