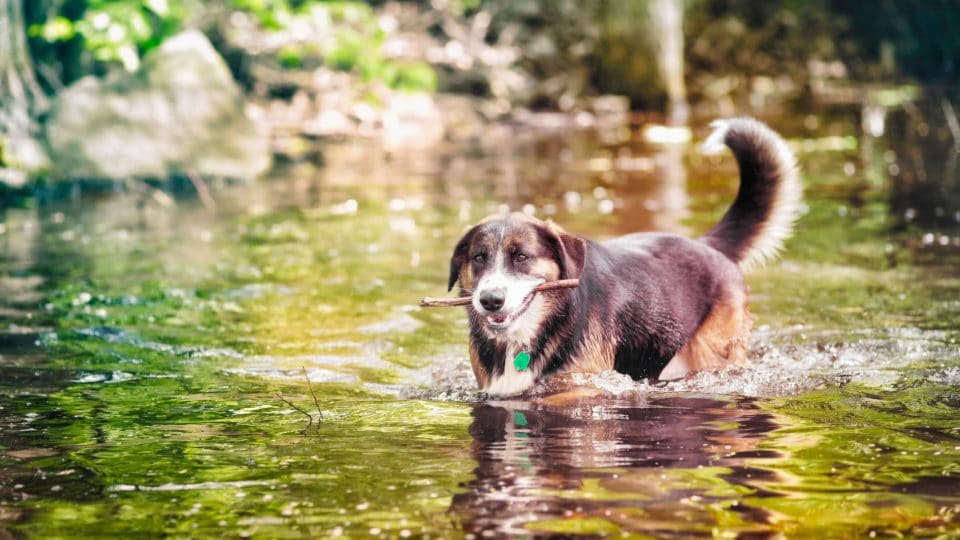 Veterinarians, environmental groups, and news agencies continue to warn dog parents that some lakes and ponds contain algae toxic to dogs. If your dog is a swimmer, you’ll want to read on.

Under particular conditions, including hot summer days, blooms of blue-green algae in freshwater bodies of water can produce extremely dangerous biological toxins. There’s no known antidote for the toxins, and it presents a very serious threat to pets, people, and livestock.

Here’s what we know about blue-green algae toxins and how to keep your pets safe.

Which algae are toxic to dogs?

Algae toxic to dogs go by a few names. Their true identity is cyanobacteria, which is a huge group (an entire biological kingdom) of single-cell photosynthetic organisms. They’re also called blue-green algae and sometimes referred to as phytoplankton (tiny plants floating in water).

Eight types of cyanobacteria are responsible for most freshwater toxic blooms. Among those Microcystis, Anabaena, and Aphanizomenon seem to be the most toxic to dogs. The toxins they produce are called cyanotoxins (literally blue-green toxins), and two types are of particular concern when it comes to dogs: microcystins and anatoxins.

Believe it or not, there are other types of cyanobacteria that people commonly eat, including Spirulina and Arthospira. Most cyanobacteria aren’t dangerous, but some are quite literally deadly. 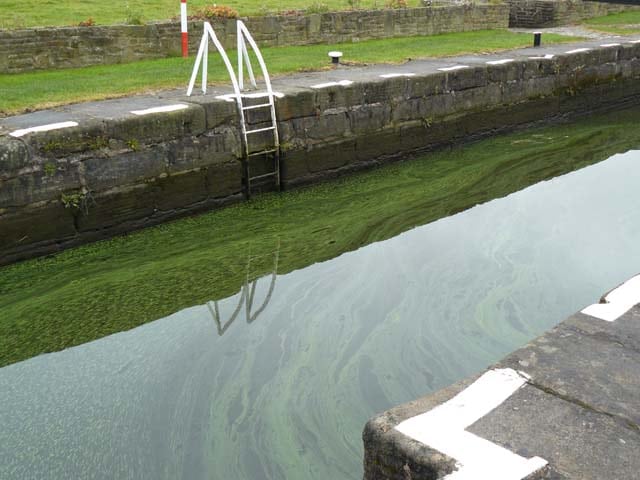 Blue-green algae are always present in freshwater ponds and lakes. Under certain conditions, the algae blooms, forming dense mats or thin oily-looking films covering a large area of the water’s surface. The combination of hot weather and a nutrient boost from nitrogen-rich sources (like fertilizer runoff or animal waste) encourages algal growth. When algae bloom, it also increases the release of potent neurotoxins into the surrounding water.

The Pet Poison Helpline offers a stern warning about cyanobacteria exposure: “While most blue-green algae blooms do not produce toxins, it is not possible to determine the presence of toxins without testing. Thus, all blooms should be considered potentially toxic. Very small exposures, such as a few mouthfuls of algae-contaminated water, may result in fatal poisoning.”

Common places a dog can be exposed

During and shortly after blooms of cyanobacteria, dogs can be exposed while swimming in lakes, ponds, temporary pools of water caused by seasonal flooding, and standing water, like in abandoned swimming pools. The water will usually have a greenish color and may have an oily green sheen and/or visible algae mats.

It’s impossible to judge if the water is healthy or toxic just by appearance.

Many healthy ponds and lakes have a green color, so it’s impossible to judge if the water is healthy or toxic just by appearance. If you live in an agricultural area, keep in mind that water used in irrigation and aquaculture can also contain cyanotoxins when conditions are right. 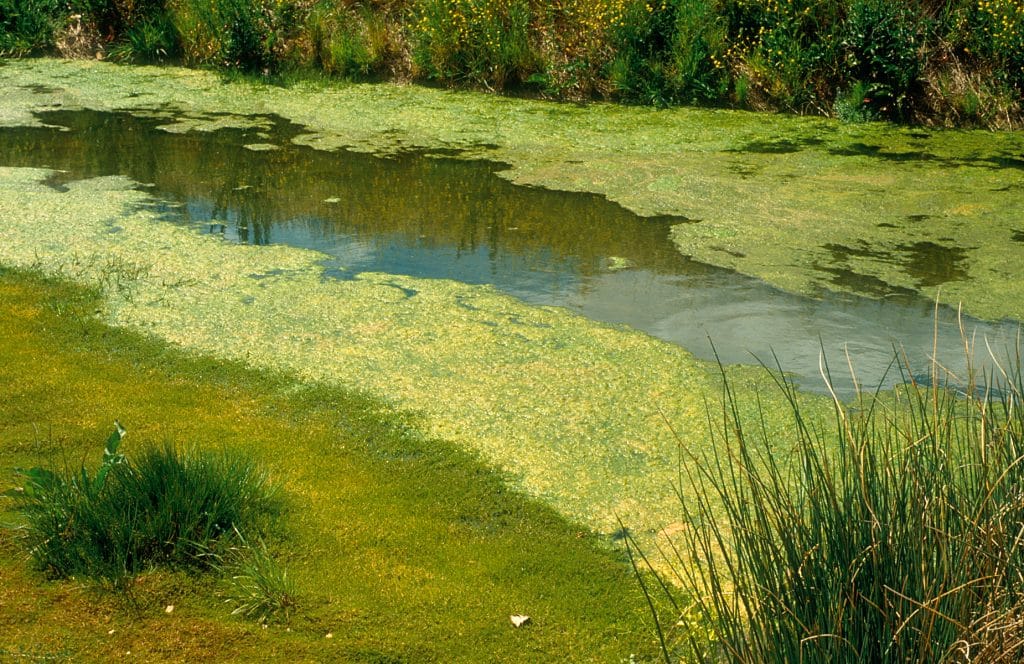 How can dogs be exposed to toxic algae?

Dogs are exposed by drinking or licking toxic water. Drinking directly from a pond, gulping water while swimming, or licking their wet fur following a swim are common routes of exposure.

Some dogs have been exposed by licking their own fur after being sprayed with toxic pond water by another dog shaking off post-swim. Cyanotoxins are extraordinarily potent.

My dog’s been exposed. What now?

If you suspect that your dog has been exposed to blue-green algae, take them directly to your veterinarian or an emergency vet. Every moment counts because cyanotoxins act very quickly.

“Unfortunately, there is no antidote for the toxins produced by blue-green algae.”

The Pet Poison Helpline lists these signs of cyanotoxin exposure:

The helpline stresses the importance of emergency veterinary treatment if you suspect your dog has been exposed. “Unfortunately, there is no antidote for the toxins produced by blue-green algae. Immediate veterinary care is imperative.”

Recent interviews with those who have lost dogs to cyanotoxin poisoning noted that the first signs of trouble included their dog losing control of their body—tremors, floppy muscle tone, salivating, and acting disoriented.

Different cyanotoxins will produce different symptoms. Microcystins cause liver damage, resulting in symptoms such as diarrhea, vomiting, bloody stool, disorientation, seizures, and coma. Microcystin poisoning can result in death within four hours to a few days of exposure due to liver failure.

Anatoxins cause neurological poisoning, including symptoms such as muscle rigidity, paralysis, tremors, and difficulty breathing. Anatoxin poisoning can result in death within minutes to hours of exposure.

Veterinarians diagnose cyanotoxin exposure based on three lines of evidence, according to the Merck Veterinary Manual:

Aggressive care is required to treat any exposure to algae toxic to dogs. This can include anti-seizure medication and supplemental oxygen given to your dog when you arrive at the veterinarian’s office or animal hospital.

Dogs with suspected exposure but no symptoms might be given a dose of activated charcoal by mouth, along with lots of fresh water and high-quality food. The vet might also choose to treat a dog with an oral medication that absorbs toxins in the digestive tract, and/or an injection of a medication that blocks harmful compounds produced during liver failure. 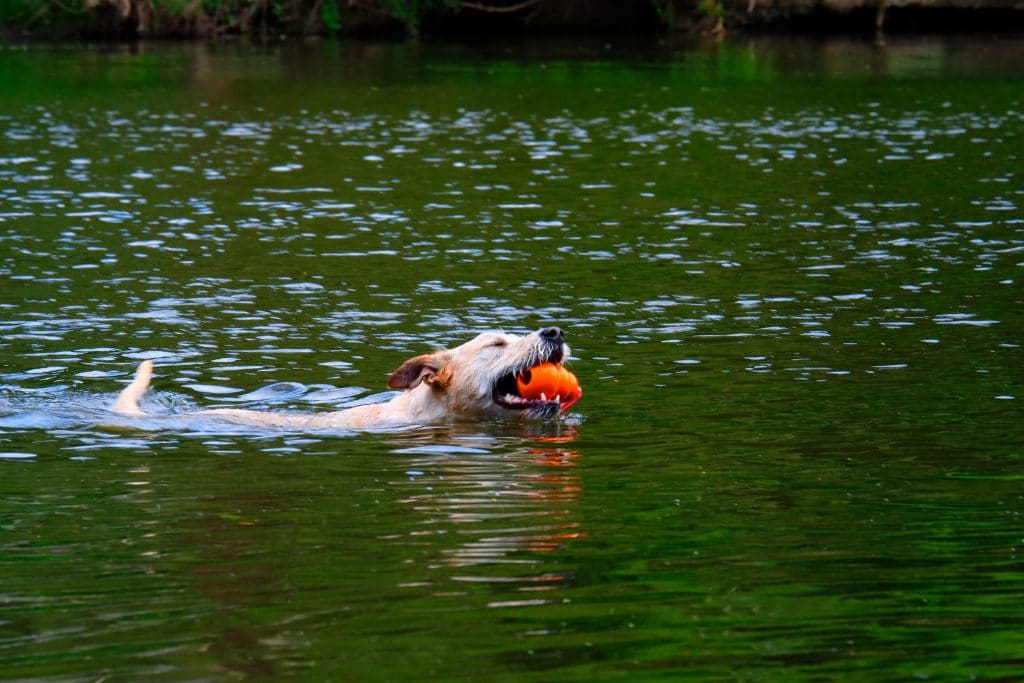 How do I keep my dog from being exposed?

Prevention is key. The Merck Veterinary Manual explains how to treat freshwater sources in order to prevent blooms of cyanobacteria, which could be useful to dog owners with ponds or standing bodies of water on their property.

The most foolproof way to prevent exposure is to keep your dog away from standing fresh water in ponds, lakes, rivers, reservoirs, and abandoned swimming pools. If that’s difficult, you can reduce your dog’s risk of cyanotoxin exposure by keeping them away from all water with visible algae mats or green sheen, or water that has a bad smell. Don’t allow your dog to chew on algae mats or on sticks with clinging algae.

Of course, funky, smelly water is very attractive to dogs, so keeping your dog on leash in any areas with fresh water is important. A quick internet search on algae blooms in your area will alert you to any bodies of water that have been closed due to water blooms.

A little more digging might tell you which waters have been tested by local authorities, like this helpful website from the Indiana Department of Environmental Management. If you see any hazard signs about toxic algae posted at your favorite swimming hole, please, for your dog’s sake, read them and take them to heart.

If you’re ever unsure about whether it’s safe to let your dog play in the water, the CDC advises, “When in doubt, it’s best to keep out!”