Which names will be crowned top dog this year? The results are in for 2020’s most popular dog names in the UK. If you’ve ever named a dog, you know how important it is to find the perfect name—one that matches their unique personality and maybe says a little about you, too.

Much like human baby names, dog name trends rise and fall each year. They also shine a light on the things that matter most to us. The names we choose for our pets are often a direct reflection of our passions and preoccupations. And they tell a story about the people, places, and stories that defined our year.

That’s why every year at Rover, we take a look at our database of tens of thousands of pets to uncover pet name trends and discover what people are naming their dogs—and what stories those names can tell us about the state of pet parenthood.

Our community's dog names can confirm: We've never experienced a year quite like 2020. It's a year when dog adoption rates soared and many pet parents spent more time at home than ever snuggled up with their pets. From old favorites topping the male and female dog name charts to the unique monikers folks are giving to their pandemic puppies, some of the names pet parents have chosen for their furry family members this year are as surprising as 2020 itself.

The Most Popular Dog Names of 2020

Good news, dog lovers! Rover’s dog name data for 2020 is in—and it’s everything you want it to be. Wondering if last year’s champs still reign supreme, if there are any newcomers, or if your dog’s name has made it to the top spot? Look no further...

Bella ranked number one as 2020’s top female dog name, followed by Luna, Poppy, Lola, and Daisy. Last year, Molly took the number five spot but was edged out by Daisy this year, while Luna has moved up in the ranking since 2019. 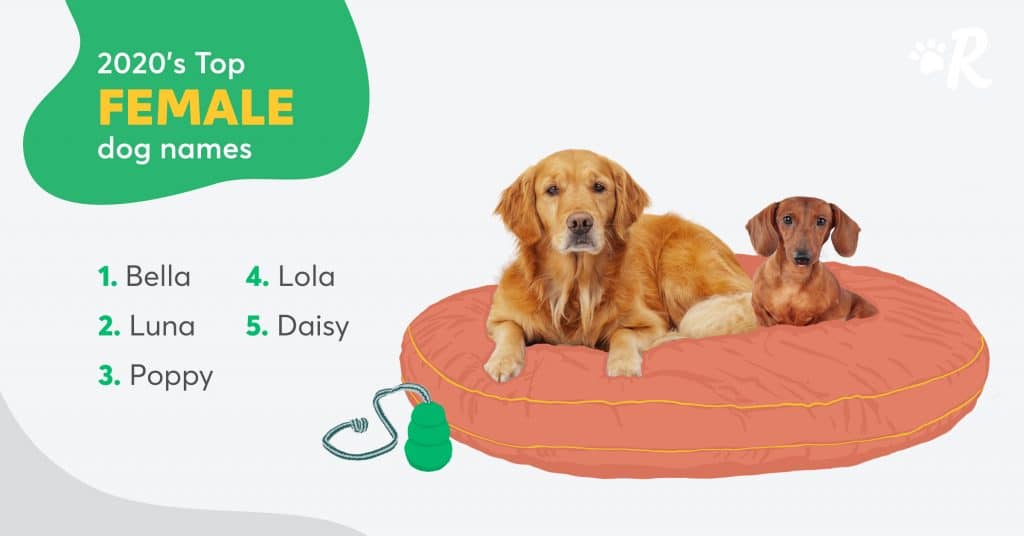 The number one most popular male dog name in 2020 is Alfie, followed by Charlie, Milo, Max, and Teddy. This year Milo has gained in popularity and is moving up the ranks, while Buddy has fallen off the top 10. 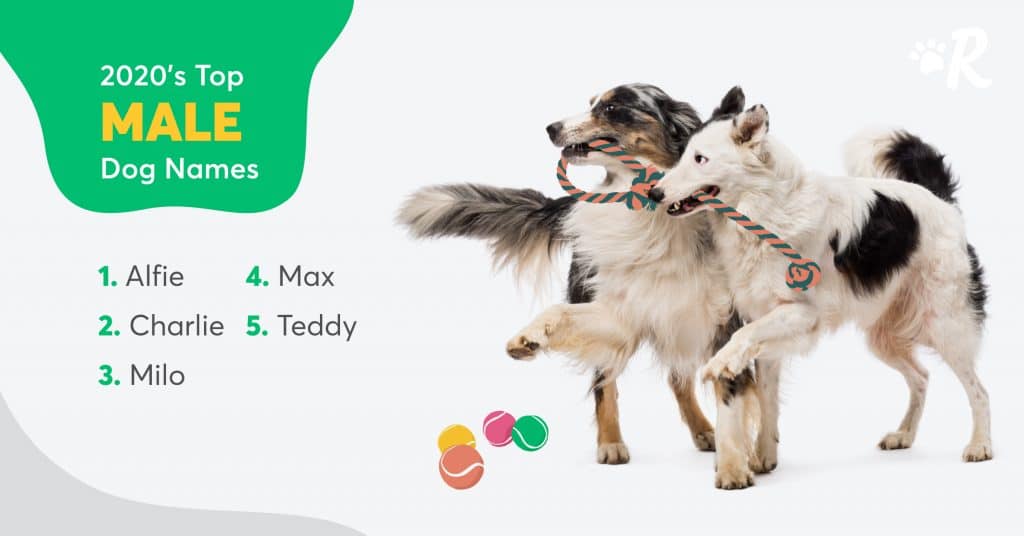 Comfort Foods Are Inspiring Dog Names in the UK

Comfort and snack food names for pets reigned supreme in the UK this year, with Twiglet coming in at number one on our list of top trending dog names. 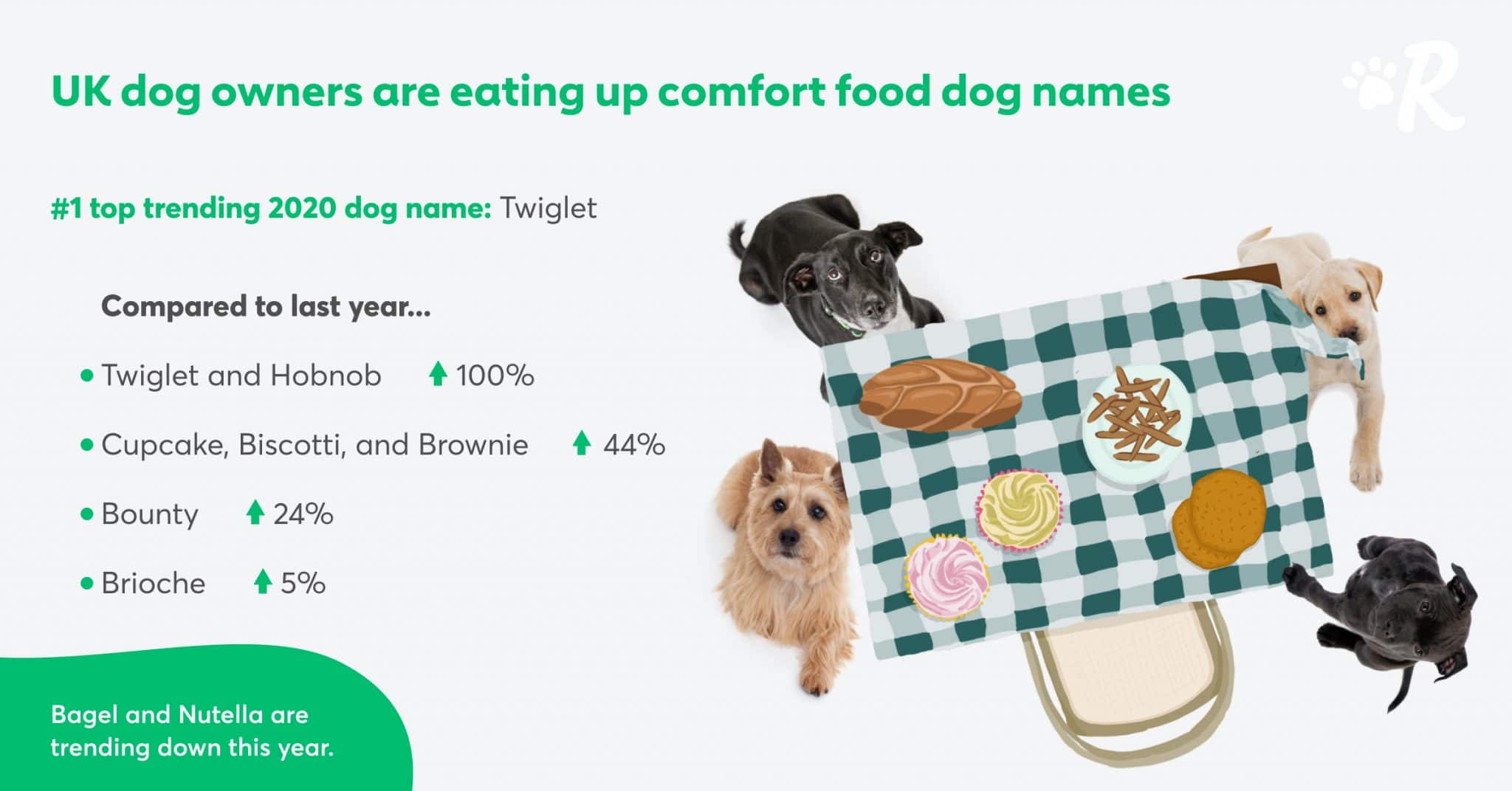 So Are Human Names!

Most people consider their pet to be part of the family, so it doesn’t surprise us that 63% of the top 100 pet names are human names. A few human names had big movement from last year. These are a few of the top trending human dog names:

Many pet owners pay tribute to their preferred music artists by naming their dogs after their favourites. In the international scene, Cher and Tupac are the most notable trending names (up 200%!), followed by Moby (up 77.51%), Britney (up 94.18%), and Shakira (up 44%). Three British pop stars made it to the Top 100 list: Lily (Allen) at number 17, Freddie (Mercury) at number 42, and Jessie (J) at number 83.

Lockdown measures enforced due to the Covid-19 pandemic got us binge watching TV and online streaming series, and there's a resulting dog naming boom!

Keeping Up With the Kardashians ends…but their popularity among dog names is still rising. Members of the long-running show recently announced the last season will end in 2021. Dogs named Kim (up 44%), Rob (up 94%), and Khloe (up 45%) are still on the rise but Kourtney, Kylie, and Kris are all trending down this year.

The contestants of RuPaul's Drag Race that have made the biggest impression on dog owners are Vivienne (up 94%) and Crystal (up 25%), both queens being part of the cast of RuPaul's Drag Race UK. We also spotted dog names like Kim Chi, Raven, Sharon (Needles), Mystique, Manila, and Jinkx (Monsoon), all part of the American cast of previous editions.

It's not just reality TV having a moment: people continue to name their pets after other popular TV shows. The names inspired on popular British TV shows are Polly (from Fawlty Towers, up 17%), Baldrick (from Blackadder, up 44%), or Edward (Only Fools and Horses, up 19%).

And of course the ever popular show Friends is always a source of inspiration! From most trending to least trending we have:

Disney-Inspired Dog Names Are on the Rise

UK pet owners are huge fans of all things Disney according to these dogs names.

The movies that inspire dog names the most are The Jungle Book, whose top trending characters are Baloo (up 15%) and Bagheera (up 44%), and the movie Aladdin with Jasmine (up 11%) and Raja (up 44%). The release of Hamilton on Disney+ had an impact: the name Hamilton is up 144%!

Dog Owners Have Travel on Their Mind

In the year of staying close to home, people named their dogs after the places that they long for the most. Places like Vigo, Lima, and Boston are trending up more than 100%. Other popular destinations include Malibu and Dallas (up 94%) and China (up 77%). Miami, Africa, Persia, Roma, Havana, and Tonga are up 45%.

Dog Owners in the UK Are Inspired By Food and Alcohol, Too

Booze-inspired dog names are always popular, and 2020 is no different. The top trending names this year are:

In the year of the sourdough starter, are dogs named after flour-based items on the rise? Breakfast favorites are certainly trendy! Waffles (up 45%), Flapjack (up 44%), Muffin (up 15%), and Donut (up 10%) are on the rise among dogs, while Cookie, Pepper, and Crackers trended down this year.

Sports Are a Dog Name Mainstay

With the sports seasons cancelled or delayed, are sports-inspired names trending down in 2020? Sports names as a whole are trending down this year among dogs, which could be tied to the fact that we had no live sports for most of the year due to COVID.

Football legend Pele (up 245%) tops the list of the most trending athlete-inspired dog names of 2020, followed by Drogba (up 44%) and the American professional boxer Tyson (up 36%).

In commemoration of the talented Kobe Bryant, Kobe (up 44%) is trending up in dog names this year. 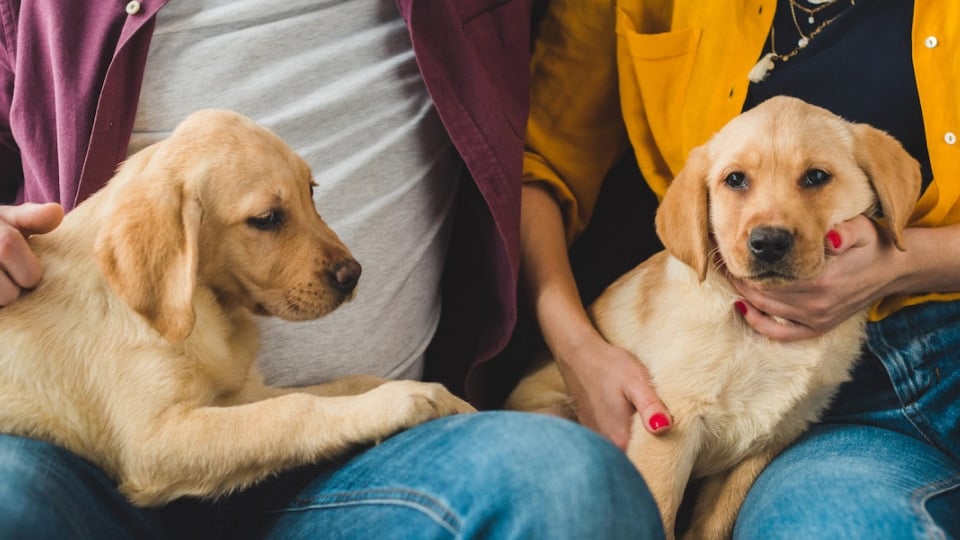 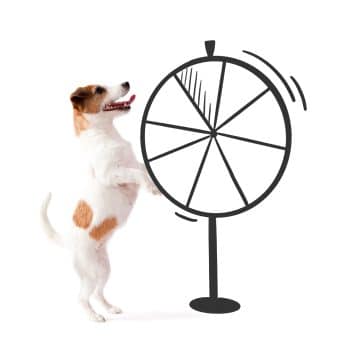 How to Choose the Ideal Dog Name

What’s the secret to finding the perfect dog name? We looked into it, and it turns out there’s both an art and a science to choosing the right name for your furry special someone. 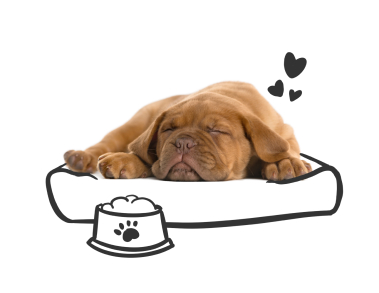 The Low-Down on Dog Adoption

Is all this talk of dog names making you long for a new four-legged family member? If you feel like you’re finally ready, we’ve put together a list of everything you need to know about adopting a dog to help you find a great match. Here's how much it costs to own a dog in 2020.