The names we give our dogs and cats say more about us than we realize. More often than not, they reflect our passions, interests, and things that matter most to us—not to mention what’s happening in the world around us. A lot of pets were given new names in 2021, in no small part due to soaring pet adoption rates and additional time spent at home due to the pandemic.

To better understand the stories these names have to tell us about the people, places, and stories that defined the past year, we dug into our database of tens of thousands of pet parents on Rover to come up with the most popular dog and cat names. We scratched past the surface to uncover the cat and dog names we loved most, which names topped the charts, and some incredibly creative names we honestly can’t stop thinking about. Ready to dig in?

The Most Popular Dog and Cat Names in 2021 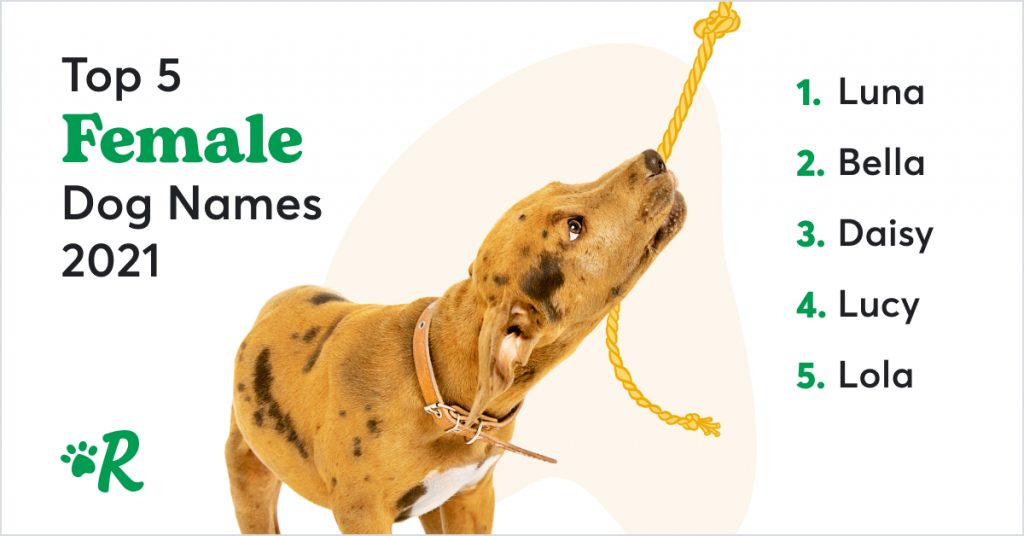 Charlie tops the list of male dog names again this year, while Milo edged out Max for second place. After Max in third is Leo, which moved from fifth place last year to fourth place in 2021. Last but not least, Rocky rounds out the top five list in fifth place. 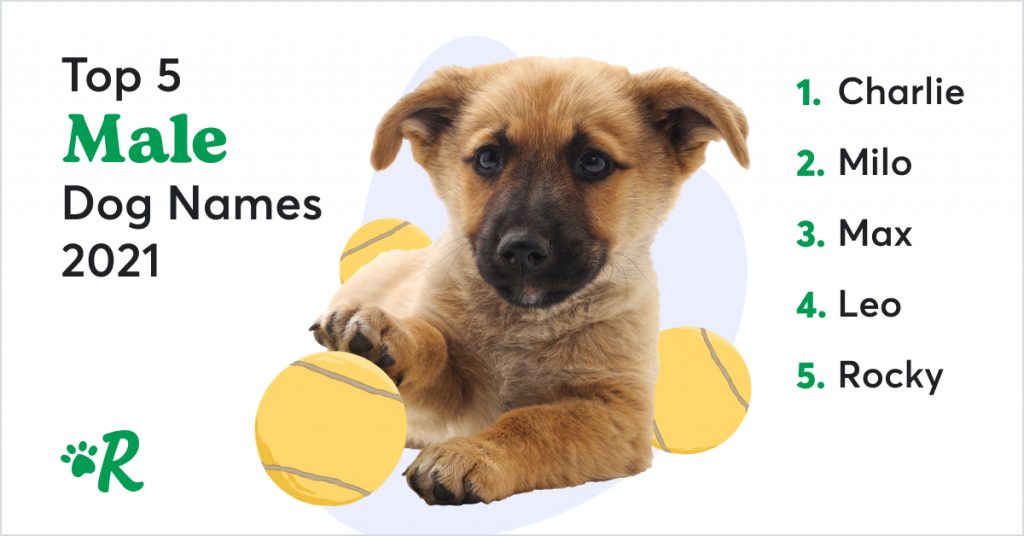 Luna and Bella top the most popular female cat names again this year, in first and second places respectively. Lily beat out Lucy for third place, pushing Lucy to fourth, and new to the top five this year is Daisy in fifth place. 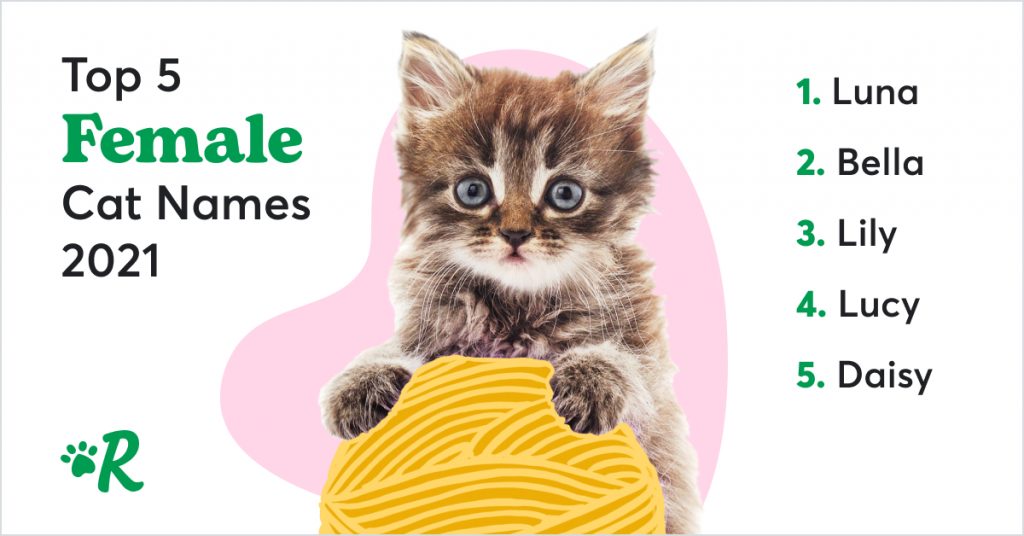 Charlie has found his way to the top of the male cat names list this year, taking first place away from Milo who now sits in third. Leo moved from fourth place last year to second place this year, while Oliver slid from second down to fourth to take Leo’s former spot. Rounding out the list in fifth place is a new name to the top five this year: Jack. 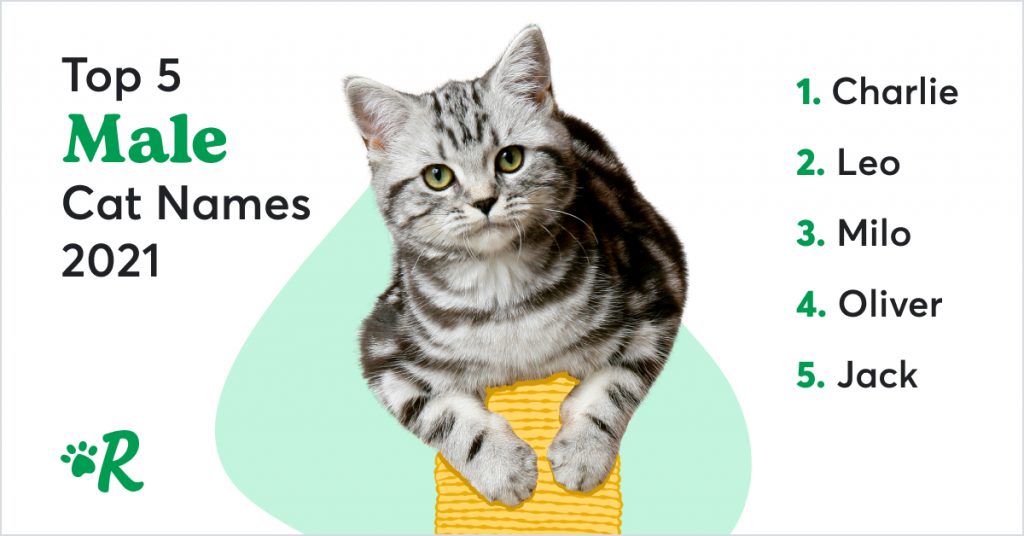 Top Trending Cat and Dog Names of the Year

The most popular COVID-inspired dog names in 2021 were Covi and Rona, with Rona making the list for the first time along with Fauci. For our feline friends, 2021 put the cat names Delta and Zoom on the map. 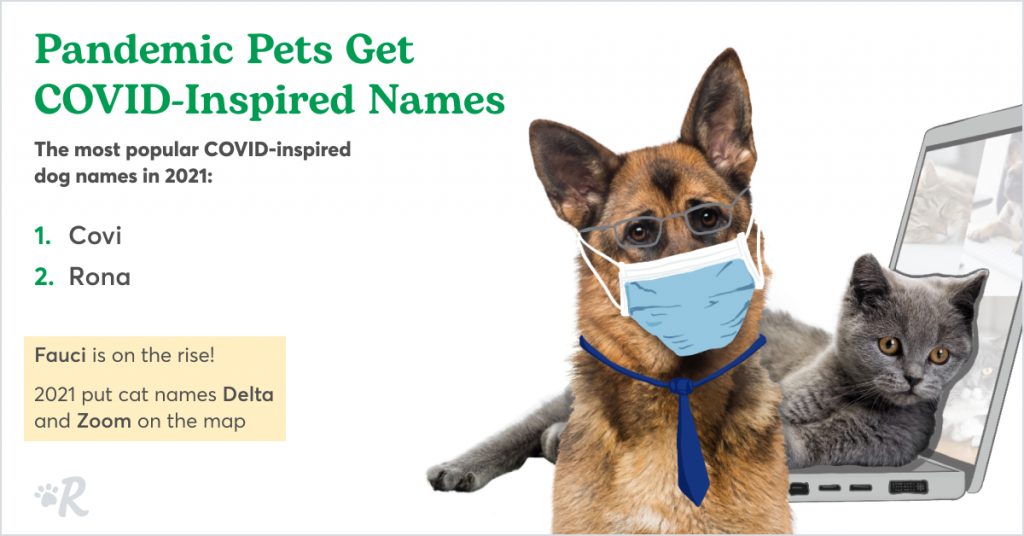 Canadian athletes had some epic moments at the Tokyo Olympics last summer. The most popular Olympic athlete-inspired pet names are Maggie, Penny, and Andre.

This is not a surprise, as Maggie (Mac Neil) took home gold in the women’s butterfly, swimmer Penny (Oleksiak) became the most decorated Summer Olympian for Canada, and Andre (De Grasse) is now a 6-time Olympic medalist in sprinting.

Schitts Creek, the Canadian hit series, continues to inspire dog names. David and Twyla are trending up for the second year in a row, while 2021 put the dog names Mutt and Moira on the map. The sheer number of cats named Moira not only outnumbered dogs, but made Moira the most popular Schitt’s Creek-inspired name of this year. 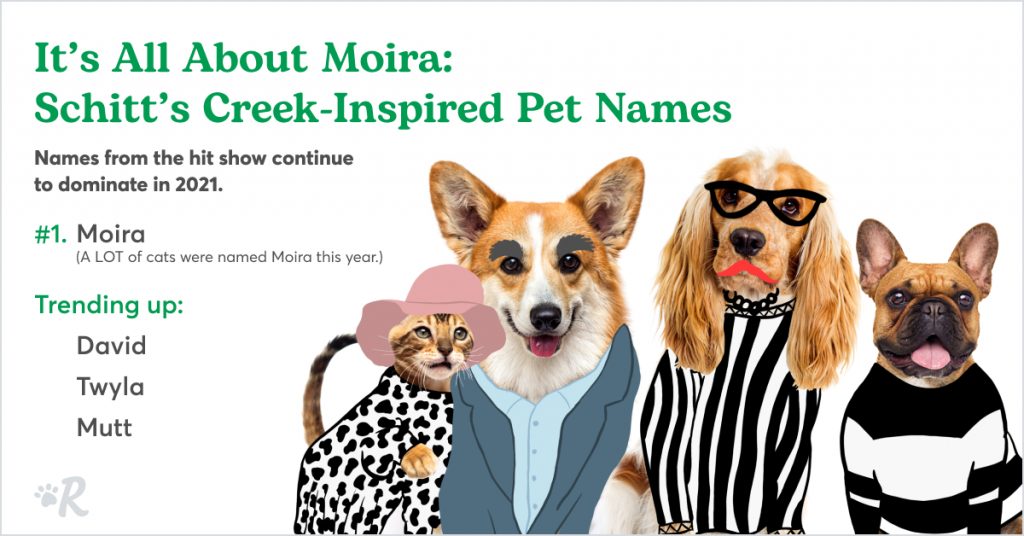 2021 marks the 10th anniversary of the first episode of the Game of Thrones TV series and dog owners are celebrating. Dragon, Arya, Winter, and Stark are trending up 122%, 31%, 28%, and 22%, respectively. But Daenerys and Sansa seem to be falling out of favor—they’re trending down 28% and 87%.

And for the first time 2021 put the dog name Cersei on the map.

Roll Out the Red Carpet for These Celebrity Names 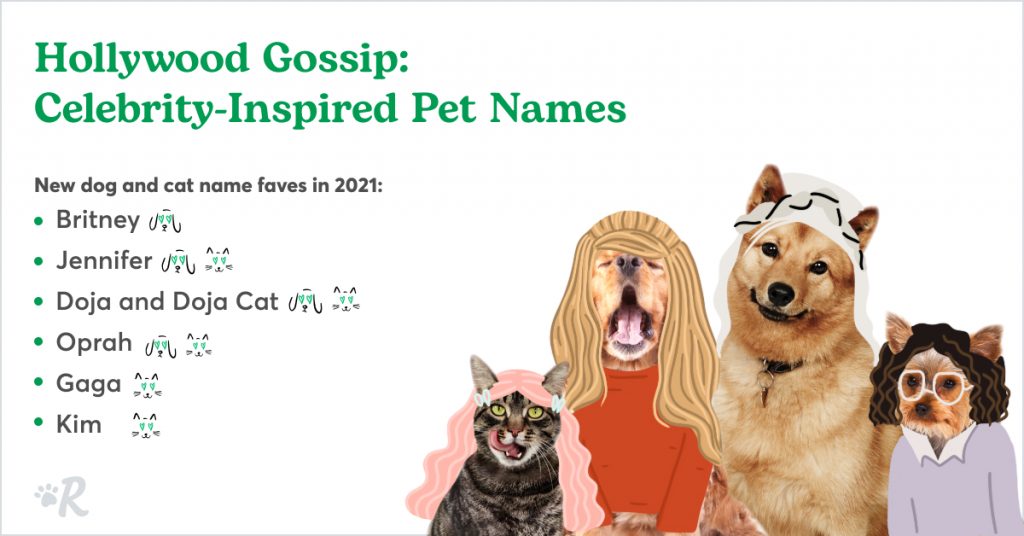 Yes, There Are Cats Named Lucifer (After the TV Show, of Course)

After 6 seasons, the hit TV show Lucifer came to close in 2021. Cats named Lucifer are on the rise as a result, trending up 59%.

Inspired by Michelle Obama’s TV show for kids, the dog names Mochi and Waffles are trending up, 2% and 82% respectively.

These Are the Names You’re Looking for: Star Wars & The Mandalorian

Inspired by Star Wars and The Mandalorian, the dog names Leia, Obi, Boba and Yoda are all trending up this year in Canada!

Both nostalgic and new, Marvel and DC characters continue to be top inspiration for dog names. The most popular names for dogs are:

The greatest growth in superhero (Marvel/DC) names for dogs goes to Jarvis (+222%), followed by Fury, Pyro, Bucky, and Viper.

These Names See the Forest for the Trees

The Canadian wilderness has inspired dog owners’ choice in dog names. Specifically, common trees are popping up as popular dog names. The top tree-inspired names are Willow, Maple, and Cedar.

Also shout out to the dogs named Timber.

Many of Canada’s top trending dog names are inspired by Pokémon characters.

The #1 trending dog name in Canada nationally is Sora, leader of Emerald Gym. The #2 trending name is Venus, one of the original four Cipher Admins. #5 is Cole, Pokémon Solar Light & Lunar Dark, #7 is Karl, a major character who appeared in Zoroark: Master of Illusions. #9 is Gaia, a hack of Pokémon Fire Red. #10 is Booker, aka Booker Hastings, from Pokémon Ranger. Kenzo is #19.

17 of the top 20 trending names in Canada can be traced back to Pokémon.

Canadian Cat and Dog Owners Looked to the Stars This Year

Sports Names Are a Win for Canadian Pet Parents

Famous former Canadian hockey player Wayne Gretzky often serves as inspiration for dog names. However this year the name Gretzky is trending down 78%.

On the flip side, Cole is the #5 trending name in Canada in 2021, up 622% this year. It’s not a surprise, given the star quality of the Montreal Canadiens hockey player Cole Caufield.

The most popular food-inspired names in 2021 are Pepper, Olive, Oreo, Maple, Cookie, and Honey. Honorable mention: The dog name Schnitzel is trending up 22%.

Cute Names for Your New Puppy 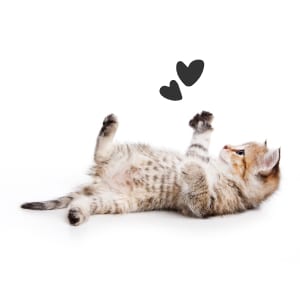 The Most Popular Cat Breeds in Canada

The Cost of Owning a Dog

Is Your Dog Happy?

The Most Popular Dog Breeds in Canada