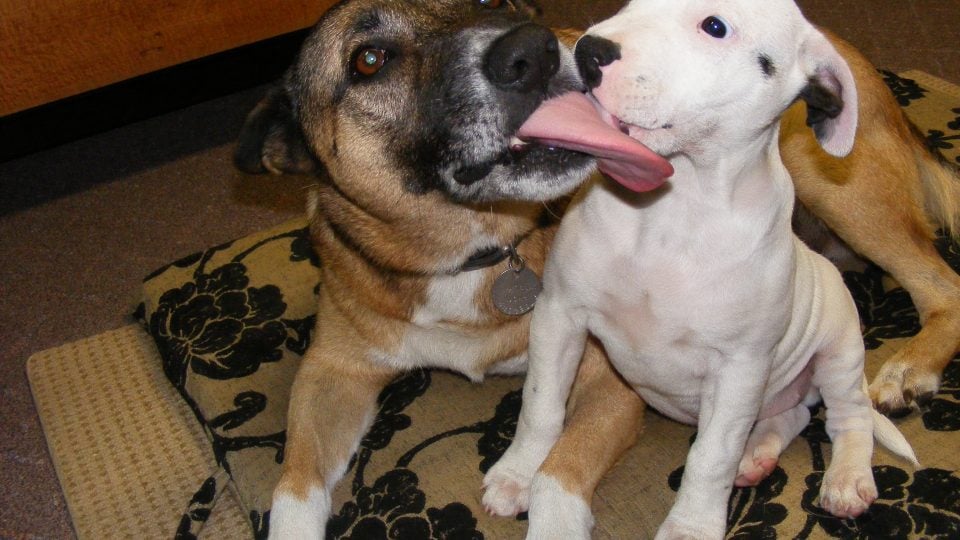 We love our dogs, but sometimes they can be real weirdos. Some things they do are puzzling to us. However, most dog behaviour makes some kind of sense, once you know where dogs are coming from.

If you’re a pet parent or have ever been around a dog for more than two minutes, you probably know that dogs love to lick. They lick a lot of weird things, like trousers and our faces. They also like to lick the faces of other dogs. What compels them to do this?

According to veterinarian Dr Karla Frazier, most dog licking falls into two categories: behavioural and medical. Licking other dogs’ faces falls into the behavioural category, and dogs do it for several different reasons. 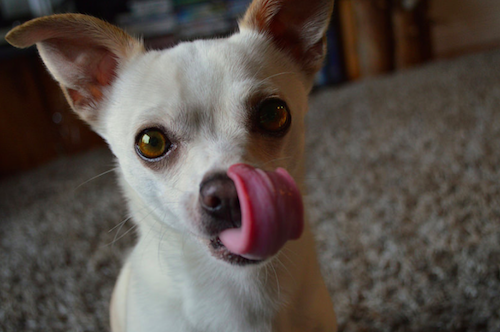 If a puppy licks their mother’s face, it’s usually a signal that they want to be fed. In the wild, puppies lick their mother’s lips when the mother has just returned from a hunt, her belly full of meat. The lick signals the mother to regurgitate some of the pre-digested food to her hungry puppies. Gross, but useful.

Domesticated puppies display the same behaviour, with the same results, after they transition to solid food. The puppy’s lick is a subordinate behaviour that essentially means ‘please take care of me’.

Why Adult Dogs Lick Other Dogs

A version of this puppy-like behaviour sometimes carries into adulthood. Adult dogs lick other dogs’ faces for several reasons:

An adult dog might lick another dog’s face to show subordination. In other words, he wants to say: “you’re in charge, and I mean you no harm”.

If a dog meets a peer he highly respects, he might lick that dog’s face to show deference. This is especially true if the dog doing the licking approaches the other dog from under the chin.

If the ‘respected’ dog licks back, she’s showing that all is well and that she accepts the other dog’s show of submission.

In the wild, more subordinate pack members lick the more dominant pack members to show their deference. This behaviour is important to maintain pack harmony.

Adorably, your dog may also lick another dog’s face to show that she’s ready to play. She may do this with both dogs she’s meeting for the first time, and dogs she already knows and likes. If she’s looking for playtime, she might lick the other dog’s face in addition to getting into play bow, that cute pose with her butt in the air and her front legs on the ground. This pose is the universal signal that a dog wants to play. Coupling it with face licking is your dog’s way of saying: “I’m friendly, let’s play!”

Licking also helps dogs relax and bond. According to dog trainer Victoria Stilwell, licking releases endorphins that feel pleasurable to the dog doing the licking as well as the recipient. That’s why licking between dogs is a helpful bonding tool. Wild dogs may lick their pack mates as a way of ensuring closeness in the group, which is essential for their survival. Domesticated dogs, of course, don’t need to stay in packs to survive, but that instinct still remains.

Many mammals lick and groom each other as a means of bonding. Roger Abrantes, author of Dog Language: An Encyclopedia of Canine Behavior and The Evolution of Canine Social Behavior,  writes that grooming is a “pleasant social practice” that helps both dogs relax. 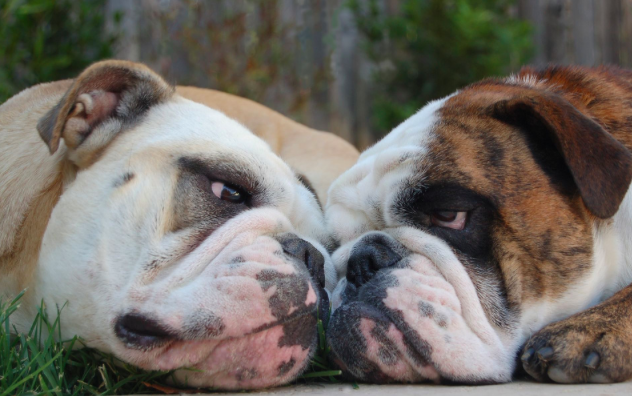 If your dog likes to lick other dogs’ faces, don’t worry. It may seem weird to us, but your dog is doing it to show friendliness, affection or deference. Whichever reason is behind his dog-on-dog face licking, it’s never a bad thing. It’s always a sign that he means no harm.  Also, it’s cute as heck.

Allegra Ringo is a writer and podcaster from Costa Mesa, CA. She cohosts the podcast Can I Pet Your Dog?, and writes about dogs all over the internet. She has a dog named Pistachio and a cat named Rick, and she loves popcorn.