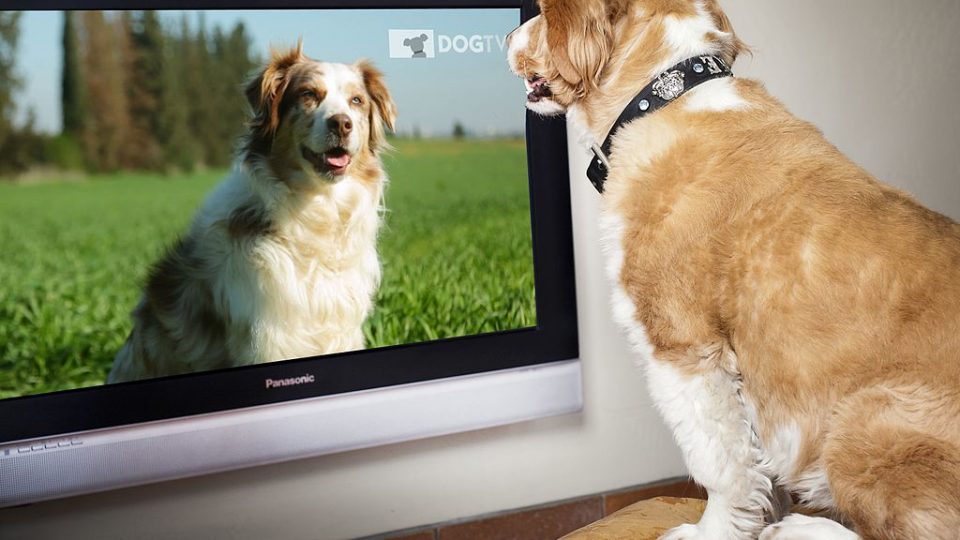 Tell me if this sounds familiar: you’ve just settled in for a cosy night at home with the dog. You’re all snuggled up on the couch with a big bowl of popcorn and your favourite TV show, when suddenly, on the screen, a doorbell rings. And your dog freaks out.

Not all dogs bark at the TV, but the ones who do can be confounding. How do you explain to them that it’s just a show? Even better, how do you train your dog not to bark at the TV at all?

Read on to learn why dogs bark at the TV, and how you can get them to stop.

What Dogs See On TV (And Why They Bark) 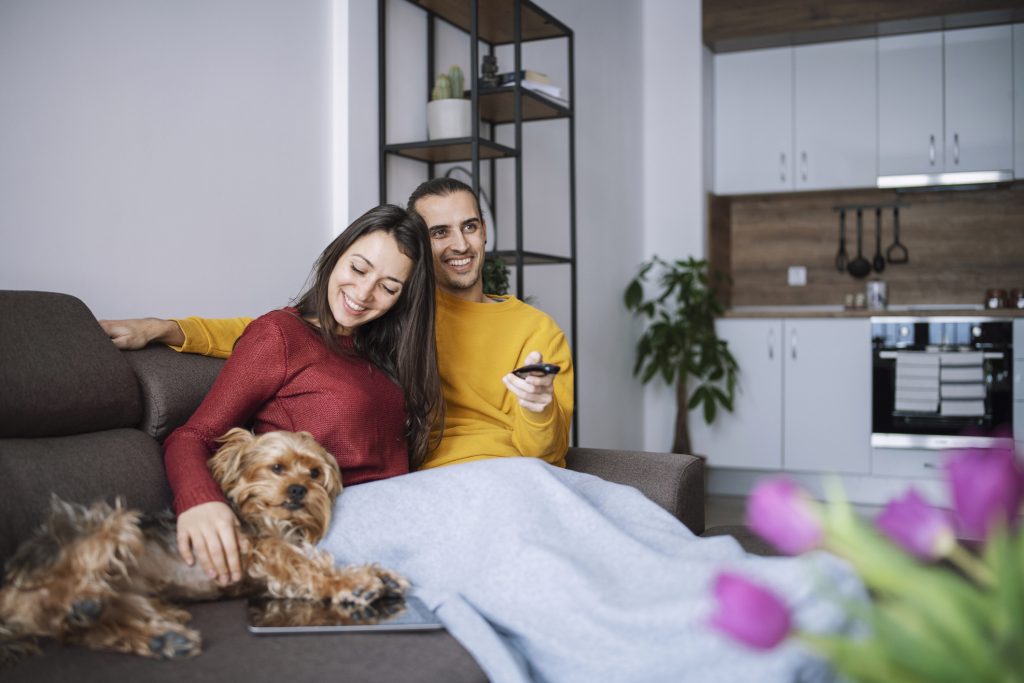 Studies show that dogs can perceive images on TV similar to the way we do, and they’re smart enough to recognise other animals on the box—especially when the screen is big! However, dogs perceive images at a faster rate than humans, and they have a more limited colour palate.

So depending on the size of your TV screen, your dog may be able to pick out specific images, or they may simply be reacting to a confusing jumble of motion and light.

Of course, dogs also have amazing ears. Often, they react to sounds on television as much as sights. And they may not be able to tell the difference between a televised noise and one happening in real life! That’s why so many dogs bark when a doorbell rings on TV.

As to why dogs bark at the TV, it really depends on the dog. Some reasons your dog barks at the TV may include:

The following tips will help you teach your dog not to bark every time the TV comes on. 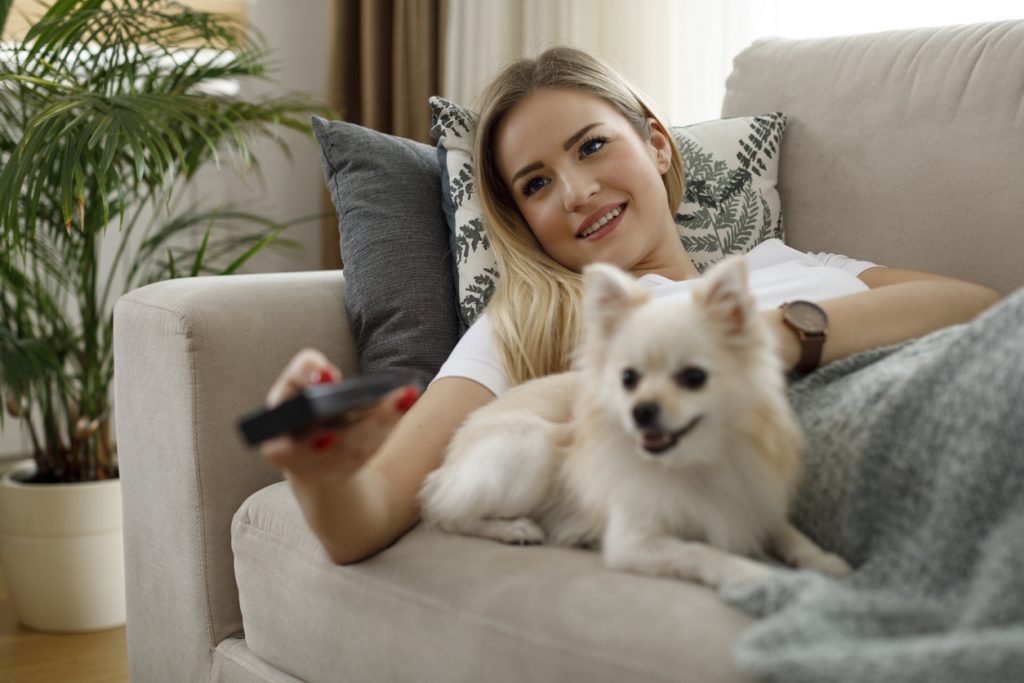 Some dogs react out of habit, but you can help them reset their habits and calm down. It just takes time and patient training.

One way to train your dog to not bark at the TV: reward them for being calm and quiet!

Pay close attention to your dog’s behaviour while the TV is on. When a sight or sound comes up that they would normally react to, give them a treat ASAP. Give them several treats in a row as long as they remain quiet.

After giving your dog a few treats, pause to let them look back at the screen, then give them a few more treats. Keep ‘treating’ your dog until the offending figure has left the screen (or stopped making noise).

The idea is to condition your dog to associate stuff on the screen with treats. After a few short training sessions, they should start looking at you instead of barking.

From there, you can gradually wean them off of treats, using an occasional biscuit or even affection and attention to reward their positive behaviour. The idea is to gradually condition them to relax and focus on spending time with you, rather than the images and sounds on screen.

Pair Television With A Game

When in doubt, distract! While you watch your favourite show, you can play tug or fetch with your dog. Keep them busy so you can enjoy your program without the sound of barking.

Toys and games can also be used as training aids. Simply follow the above suggestions for how to train your dog using playtime (instead of treats) as a reward.

Occupy Their Mouth With Something Else

You don’t have to sacrifice TV time with the dog. Just turn it into TV-and-a-treat time. A stuffed KONG toy, antler, or bully stick can occupy their attention and their mouth, keeping them from barking at the screen. Or, give your dog a challenging puzzle toy for even more brain-busting, TV-distracting fun.

Another option, if you watch TV at the same time every day, is to pair this with your dog’s meals. Teach them to connect meal time with TV time.

Exercise And Play Before Chill Time 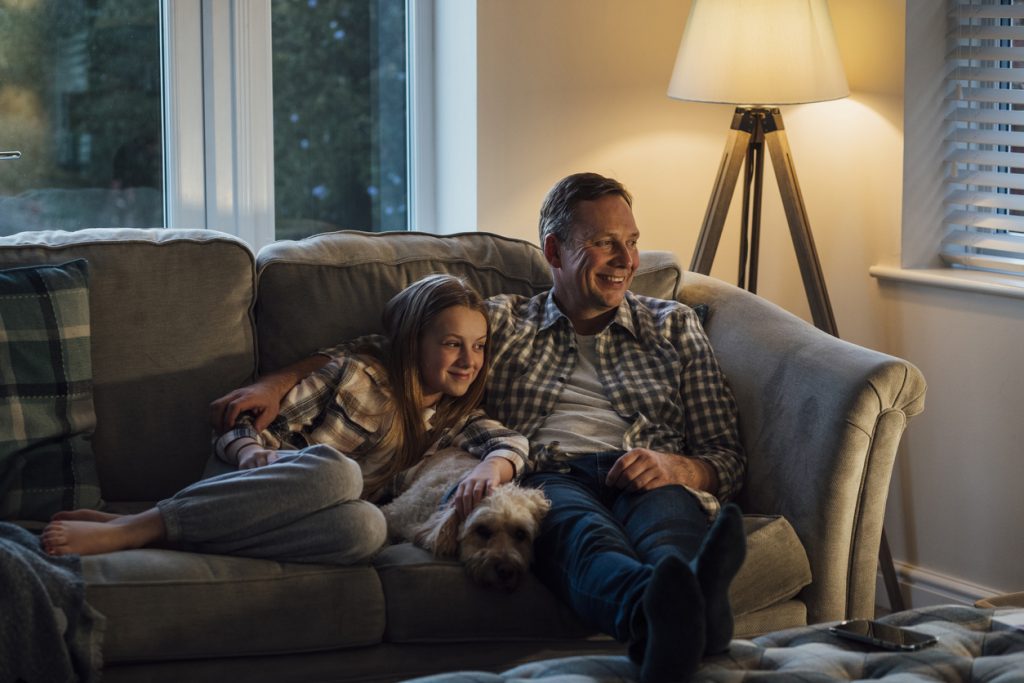 A tired dog is a relaxed dog, and a relaxed dog is less likely to react to sight and sound triggers on TV. If you know you’ll be spending time on the couch, take your dog for a long walk or playdate ahead of time.

By the time you’re browsing Netflix, your dog will be too busy snoozing to notice what’s on the screen. 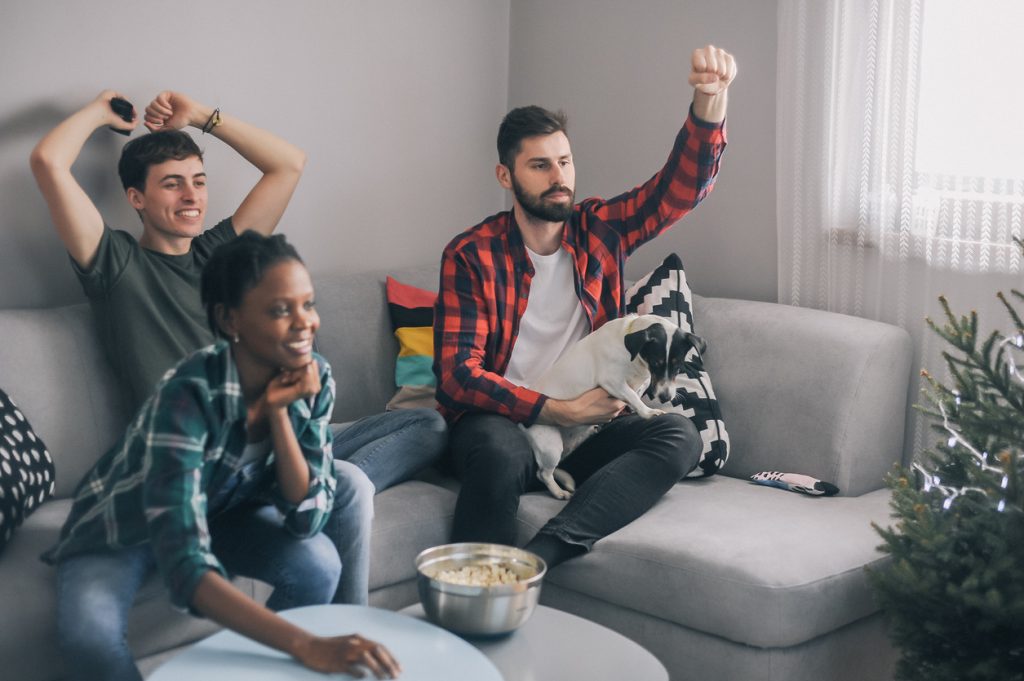 Listen: some dogs just can’t handle hearing strange noises on TV. Training is the best long-term solution, but if you really need to go on a boxset binge with your dog right now, you may have to resort to wireless headphones.

You can still hear what’s going on in the show, but your dog will only hear you. It’s a compromise that may make both of your lives less stressful.