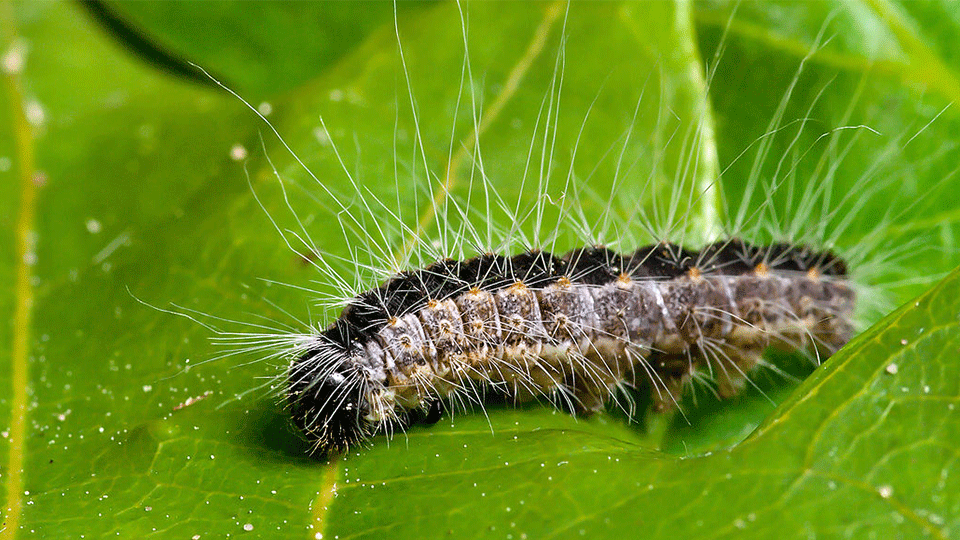 What are processionary caterpillars and moths?

Over the past few years, news has focused on the oak processionary moth (sometimes called OPM for short), which are close relatives of the pine processionary moths. Scientifically speaking, they’re two different sub-species of the same family of insect (officially known as Thaumetopoeidae). Both types of moths originally come from warmer climates including Southern Europe and Northern Africa and it’s thought that they were accidentally introduced to the UK as eggs hidden in plants brought over from continental Europe.

These insects earn their name from their characteristic nose-to-tail “follow the leader” style of moving in large groups or processions. They’ll often move around like this to find a new location to nest or burrow, or in search of food. 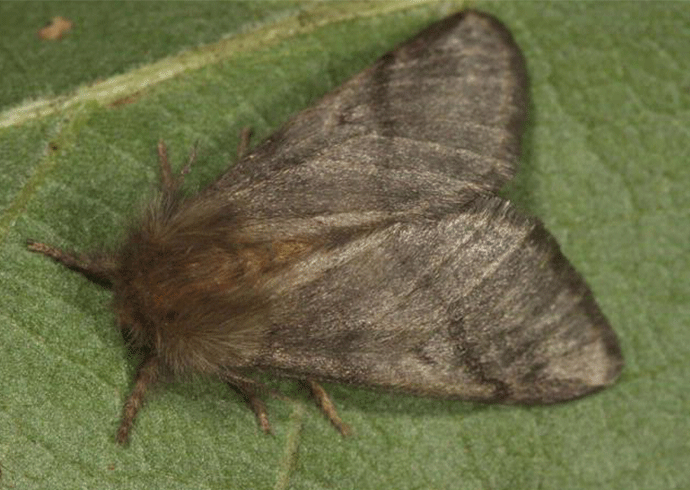 Like many other insects, processionary moths go through several stages in their lifecycle before reaching adulthood.

In the UK, it’s more likely to spot the larvae stage (caterpillar) processionary moth during the months of May onwards and into the summer. By September, the pupation stage is usually complete and adult processionary moths will emerge from their nests.

Why is it dangerous for dogs to go near them?

Processionary caterpillars present dangers for curious pets, especially dogs who may go sniffing around underneath trees and may be fascinated if they spot a hairy creepy-crawly.

Processionary caterpillars are covered in thousands of hairs, known as Urticating hairs or bristles (around 62,000 of them!). These contain a highly irritating protein that can cause severe allergic reactions. In the latter larvae stage of development (the caterpillars themselves go through six stages of moulting before entering the pupate phase) these hairs can be ejected or shed. Even when not attached to a caterpillar, these hairs can still cause incredibly nasty stings.

How to spot oak or pine processionary caterpillars and moths 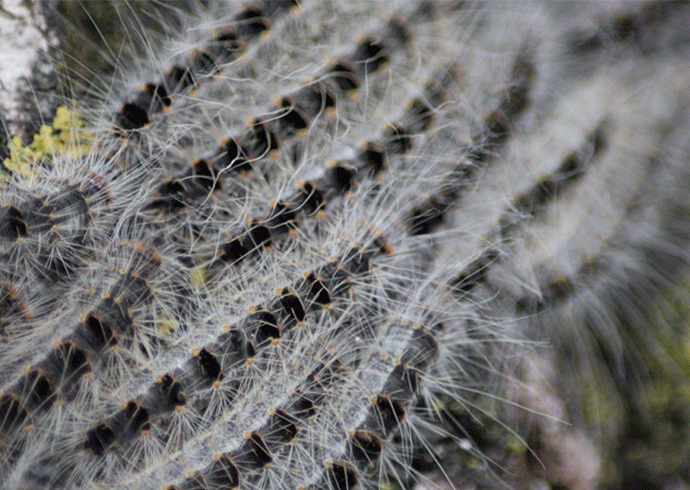 The caterpillars are usually the easiest stage to spot. Not only do they move around in their famous processions, but they also leave tell-tale signs behind them such as build nests in the branches of pine or oak trees. In contrast, the processionary moth eggs are small (in clusters, known as plaques, around 3 cm long) often hard to spot as they’re a similar colour to tree bark. What’s more, the moths are brown, grey and white in colour, closely resembling the colour of oak tree bark, are difficult to distinguish from other moths and they only live for two to three days at most.

Tell-tale signs of a nearby processionary caterpillar population include:

Take a look at some of the signs of these nasty creepy-crawlies in this Forestry Commission video.

What to do if you spot processionary caterpillars or their nest 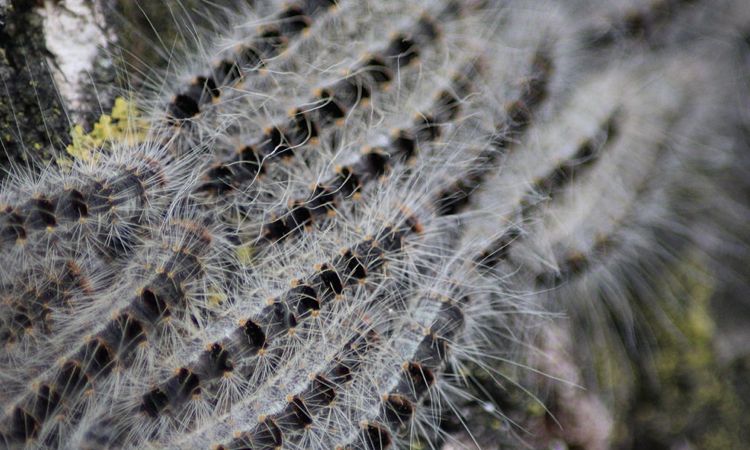 The most important thing is to not go near them. Keep your children, dogs and other pets away from trees you suspect might be host to processionary caterpillars and their nests.

If you live near an affected area, it’s a good idea to either avoid the known sites where processionary caterpillars have been spotted, or to ensure that you can restrain or train your dog (brush up on your dog’s recall with these tips) not to go near anything that even sniffs like a processionary caterpillar nest or infected tree. Even those caterpillars’ ejected or fallen hairs from a nearby tree or nest can be dangerous for up to five years!

If you spot a nest, for example in a tree in your garden or nearby park, do not attempt to remove it yourself. Instead, report the sighting of a nest or caterpillar to The Forestry Commission – there are instructions on their website including how to identify an oak tree (if you’re unsure) and how to submit a sighting of a processionary caterpillar or nest.

What do dog owners need to know about the processionary caterpillar?

The first thing you need to know about the processionary caterpillar as a dog owner is that they can be very dangerous. If a human comes into contact with a caterpillar or their hairs, it can cause a nasty allergic reaction, including a rash, asthma attacks, and vomiting. Dogs are at risk, too, though their symptoms may include a swollen, discoloured tongue or muzzle.

It’s important to be aware of the confirmed locations where the caterpillars and their nests have been discovered and to stay away and stay vigilant if you’re out walking your dog in areas populated by oak trees.

How do I know if my dog has had contact with the caterpillar or their hairs?

First, you should check if you live near one of the known areas where nests have been discovered. It’s important to rule out other possible causes – your vet will ask you a few question about where your dog has been recently so they can give the most appropriate treatment. Sadly, there’s no prevention treatment available as with flea prevention medicines.

Serious allergic reactions are rare and if your dog has come into contact with a few hairs it’s likely that your dog will only experience slight irritation or discomfort. In these cases, it’s a good idea to call your vet for advice and keep an eye on your dog for a few days.

However, if you know or suspect your dog has come into direct contact with a caterpillar for example by sniffing, attempting to eat or play with a caterpillar or their hairs, you may spot the following symptoms of a serious allergic reaction:

Here’s what you’ll need to do if your dog has come into contact with a processionary caterpillar:

Wash your dog’s mouth with water to reduce the effect of the caterpillar hairs – it’s important not to scrub as this will make it worse.
Take your dog to the vet for an emergency appointment. It’s important that a vet sees them quickly so your dog can be given the right treatment to alleviate the symptoms.

In the most serious and rare cases, a severe allergic reaction could be fatal, so it’s important to stay vigilant, avoid known processionary caterpillar areas and keep your dog away from oak trees where possible during the spring and summer months. After walks, make sure you check your dog’s mouth and muzzle for any signs of irritation.

To help get the word out about this latest outbreak and the threat it poses to dogs, share our article with dog owners you know in the south east, as well as your Rover.com dog walker. And if you don’t already have someone to look after your furry little chum, check out all of the sitters who provide dog boarding in London—it couldn’t be easier to find a dog lover who’ll treat your dog like family when you can’t be around.