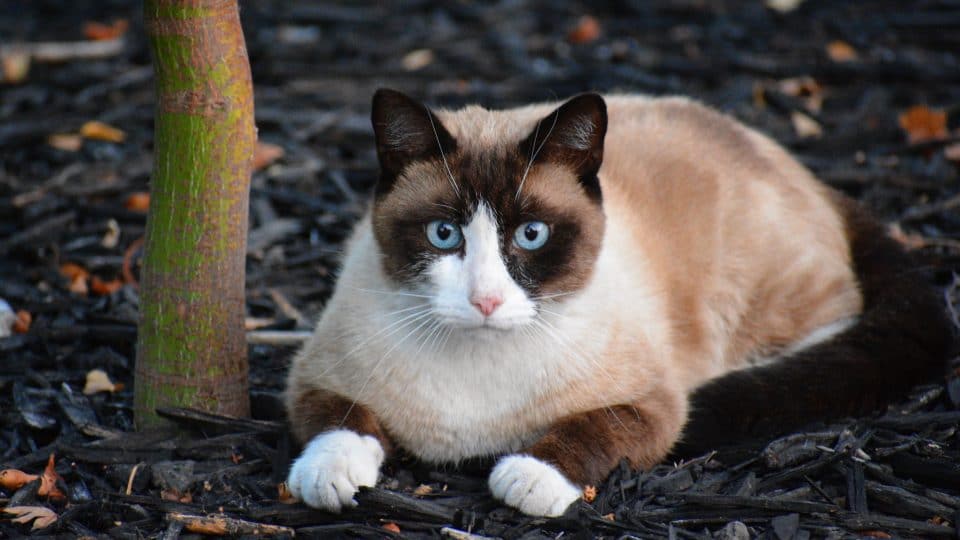 How much do you know about them?

From their unique physical characteristics to their charming personality quirks, we’ve rounded up some of the most fascinating facts about Snowshoe cats so you can get to know them even better.

Contrary to how they appear as adults, Snowshoe cats are born completely white. Sometimes, they have faint hints of markings at birth, but they are generally much lighter than those on an adult Snowshoe cat. Within a few years, they begin to develop their signature markings.

2. Their Lineage is Multi-Faceted

Snowshoe cats get their distinct traits from their unique blend of genes. Initially, they were bred by crossing American shorthairs with Siamese cats. However, as time passed and the breed developed, the preferred breeding combination evolved. Currently, “breeders prefer the Oriental Shorthair, and the older type of Siamese,” according to PetMD. The older Siamese type is preferred for breeding snowshoes because of its stockier build.

3. Their Eyes Are Always Blue

Blue eyes are one of the signature features of the Snowshoe cat. Their eyes can come in a range of blues, from a pale sky blue to deep, piercing azure.

Their Name Comes From Their Markings

In the 1960s, a breeder in the United States named Dorothy Hinds-Daugherty discovered three kittens in a Siamese litter that had white feet and socks—markings that deviated from the Siamese norm. Based on their snowy-white “shoes,” she decided to name the new cats “Snowshoes.”

Snowshoes Weren’t Officially Recognised Until the ’80s and ’90s

Hinds-Daugherty tried to gain official recognition for the Snowshoe cats. She developed the breed, and within a few years, the Cat Fanciers’ Federation (CFF) recognised it as Experimental. By 1982, the CFF bumped the breed up from Experimental to Championship recognition.

In the UK a breeding programme was started in 1986 and they were recognised as an official breed by the GCCF in 2013.

Their History is a Mystery

The snowshoe is considered a relatively new breed, as most of what is known about them is from the 1960s or later. Due to poorly kept records, their history has been difficult to piece together.

There is evidence of Snowshoes in both a Victorian photograph and an old Japanese silkscreen, suggesting that they may have been around longer than most people think.

Unlike most other cats, snowshoes love water! In fact, they even like to go swimming. They’ll climb into the bath for a swim, as long as it’s their idea.

If your snowshoe hasn’t taken the plunge and tried the bath, offer them a shallow container of water to play around in, as it can provide hours of entertainment.

More than any other single characteristic, markings are what define a snowshoe. In order to meet the breed standard, snowshoes must have the upside-down “V” between their eyes, two white mittens on their front feet, two white boots in the back, and of course, their signature blue eyes.

They Form a Primary Attachment

While snowshoes tend to love people in general, they usually form a primary bond with one person in particular. Once that bond is formed, they’re always at their human’s side, much like a dog.

Unlike a dog, however, Snowshoes generally like to lead their human around. Because they enjoy human company so much, it’s best to avoid leaving them alone for extended periods of time. If you can’t be with your cat for whatever reason, one of our wonderful cat sitters will be happy to give them all the attention they deserve while you’re gone.

Grumpy Cat Was Not One

Despite being the spitting image of a Snowshoe cat, Grumpy Cat was actually a mixed breed. The famous feline’s parents were a calico and a tabby, though it is possible that there was snowshoe somewhere in her line, as the snowshoe’s signature traits are recessive.