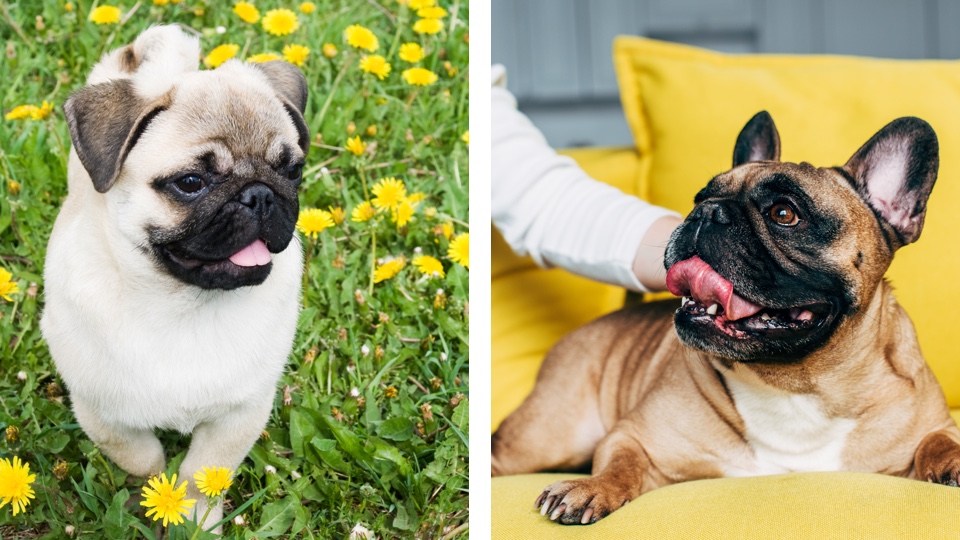 It can be hard to tell the difference between a pug and a French bulldog. Both breeds share a lot of similarities beyond their loveable, furry features. Read our guide to learn more about these family-friendly breeds and also about similar dogs like the Frenchie pug and puggle. You’ll become a bona fide expert (we hope!).

Pugs are an ancient breed that originated from China during the Han Dynasty (206BC – 200AD). They were owned by Emperors, housed in luxury accommodation and even guarded by soldiers. Pugs were brought to Europe via Dutch traders in the late 1500s and early 1600s when China began trading with Europe, and they quickly became the furry favourites of royal families—in Holland, pugs became the official dog of the House of Orange, and both Marie Antoinette and Josephine Bonaparte had them as pets. Across the channel, pugs were first exhibited in the UK in 1861 and were also very popular during the Victorian era where they were featured in paintings and figurines of the time. Queen Victoria was a fan of apricot-fawn pugs and also bred the dogs.

The French bulldog, or Frenchie, as they are affectionately known by their fans the world over today, actually started life across the channel in England. During the Industrial Revolution, English lacemakers took their small toy bulldogs with them to work in Normandy. Their furry companions were originally very popular ratters. In France, the dogs were then bred with French terriers and the result was the French bulldog we know and love today. The breed became popular with Parisian women who championed their bat-like ears. Later, at the end of the 19th century, American fanciers created the very first French bulldog club. 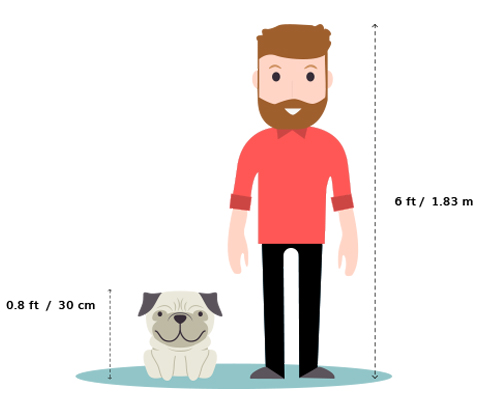 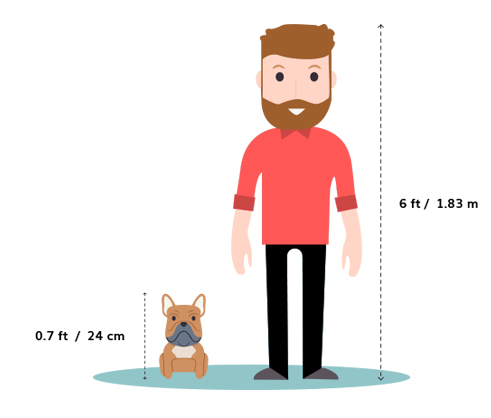 French Bulldogs have short snouts, minimal tails and bug eyes. Their nose is extremely short with broader nostrils and a distinctive line between them.

Pugs have large, flat round heads with round, bulgy eyes and have deep wrinkles on their faces. The Chinese, who originally bred pugs, prized these wrinkles because they resembled good luck symbols in their language. Pugs can also have little moles or ‘beauty marks’ on their cheeks. Their snout is short and black and their forehead looks like it has been imprinted with a distinct thumb mark. 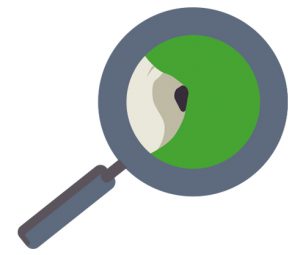 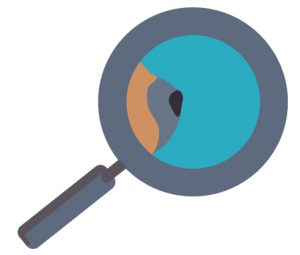 Both dogs have flatter faces which means they are brachycephalic breeds. Their tiny nostrils, long palates and narrow tracheas can cause health and breathing problems. You can read more about some of the health issues that brachycephalic dogs have here.

Frenchies are known for their distinctive ‘bat’ ears that are moderate in size and stand erect on their square-shaped head. Pugs have less pronounced ears that are floppy and can feel quite velvety to the touch! 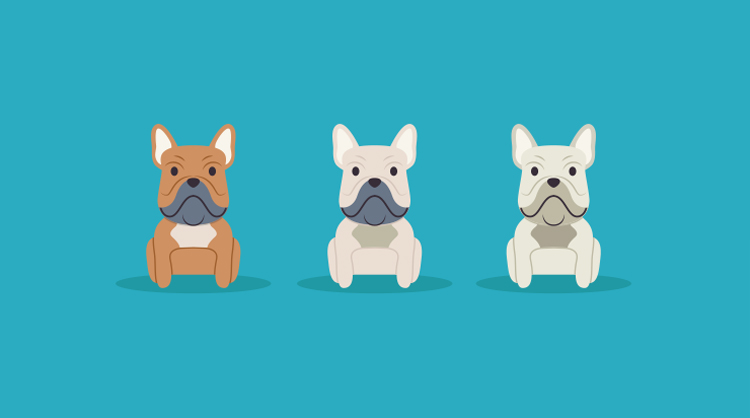 Frenchies come in a variety of colours like brindle, cream, fawn and white, while pugs generally comes in two colours; black or fawn. 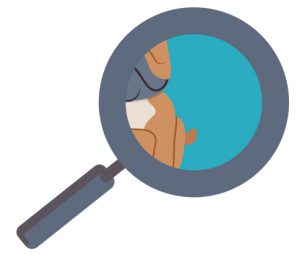 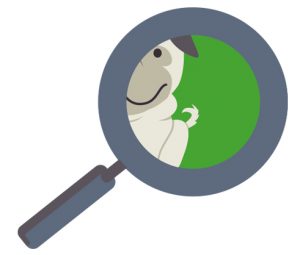 The Frenchie’s tail is stumpy, and small and either straight or screwed and will sit low over their rectum. A screwed tail is caused by a malformation in the vertebrae and is more common in bulldogs. Pugs have a small, tightly curled tail.

Frenchies boast a fine, fair and short coat and there’s little to no odour (aside from the occasional wind!) and minimal shedding. Pugs are double-coated and tend to shed a lot, particularly in the summer months.

Both breeds can be sensitive to extreme cold and pugs can overheat easily in the warmer months due to their short muzzle so their activity needs to be monitored.

What is a Frenchie Pug?

It is a crossbreed between a Frenchie and a Pug. It is also known as a Frug.

What is a Puggle?

This is a crossbreed between a purebred Beagle and a pug.

Pugs are sometimes called “the comedians of the dog world” and please their owners with constant entertainment, amusement and cuddles. They are lovers and are very much a lap dog wanting constant companionship. Don’t be surprised if your pug wants to sleep in your bed with you, too!

Pugs don’t need a lot of exercise and can overheat in hot weather so they are perfect for spending time indoors with their owner and can live well in small dwellings.

Not to be upstaged, Frenchies are also very friendly, loving breeds and make excellent, furry companions. Due to their heavier build, French Bulldogs are more relaxed and less agile when it comes to running and jumping. Regular, moderate exercise such as long walks or hikes are great for Frenchies and will keep them healthy and lean. Equally, Frenchies don’t need a tonne of exercise, so they’re happy being at home with their owner, too.

Both dogs are very friendly, loving breeds and make excellent, furry companions. If you can’t be around as much as you’d like, you can find your dog an amazing dog sitter who offers dog boarding to keep them company through Rover.com.

Pugs are greedy eaters and can overeat so their food intake needs to be monitored to prevent weight gain. French bulldogs can also suffer from obesity if overfed and under-exercised but may not be as obsessed with food as pugs.

Pugs are very intelligent but equally stubborn and can be difficult to train. At the same time, their easy-going nature and loving, sedentary personality make them great pets for first-time and elderly owners.

French bulldogs can be quite bullish and stubborn so it’s important for owners to express their authority early on. Frenchies may be small but don’t baby your dog. They can become stubborn and and if poorly trained, even aggressive towards other dogs.

Both dogs are super loving breeds and make great family pets. French bulldogs can be protective around small children so it’s best to socialise your Frenchie with other dogs and humans at a young age.

The average lifespan of a French bulldog is over 10 years whilst a pug is 12-15 years.

Pugs tend to have more health problems than French bulldogs but both breeds can have respiratory problems due to their short muzzles. Plus, they can overheat in hot weather and suffer from obesity if overfed, too.

Frenchies are prone to problems with their eyes, heart and back. Pugs are also prone to eye problems due to their large, bulging eyes.

Not necessarily a ‘health’ concern but both breeds are known as loud snorers and Frenchies’ are prone to passing gas—which may be quite unfortunate for those around them!