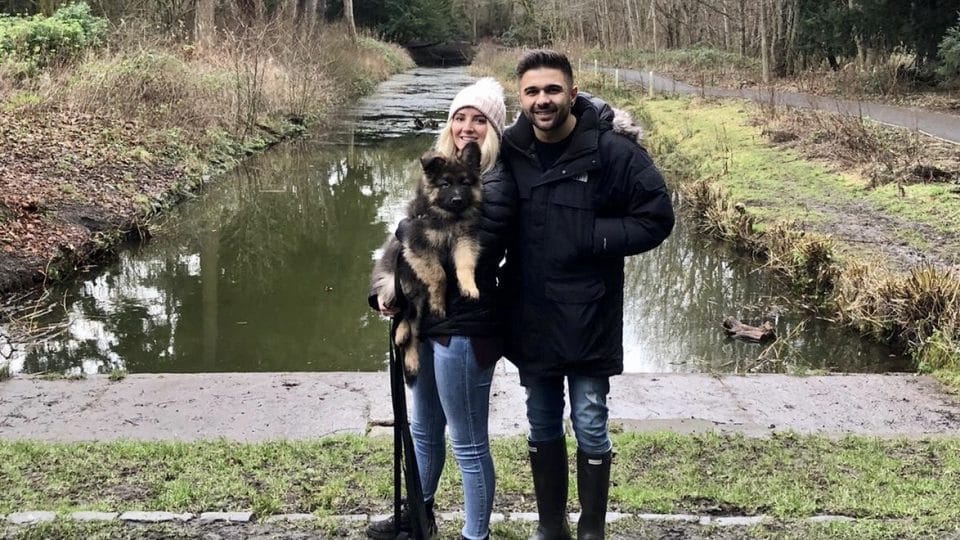 Recently ranked the UK’s greenest city by environmental firm, First Mile, Edinburgh is a fantastic city to own a dog in. Thanks to almost half the city being devoted to green space, there are good places to walk your dog in every single direction–whether you need a city-centre dog park to chuck a ball around in, or want an energy-draining scramble across a sprawling country estate. Be warned: with dog parks this good, your dog and its buddies will probably have a more packed social life than you. 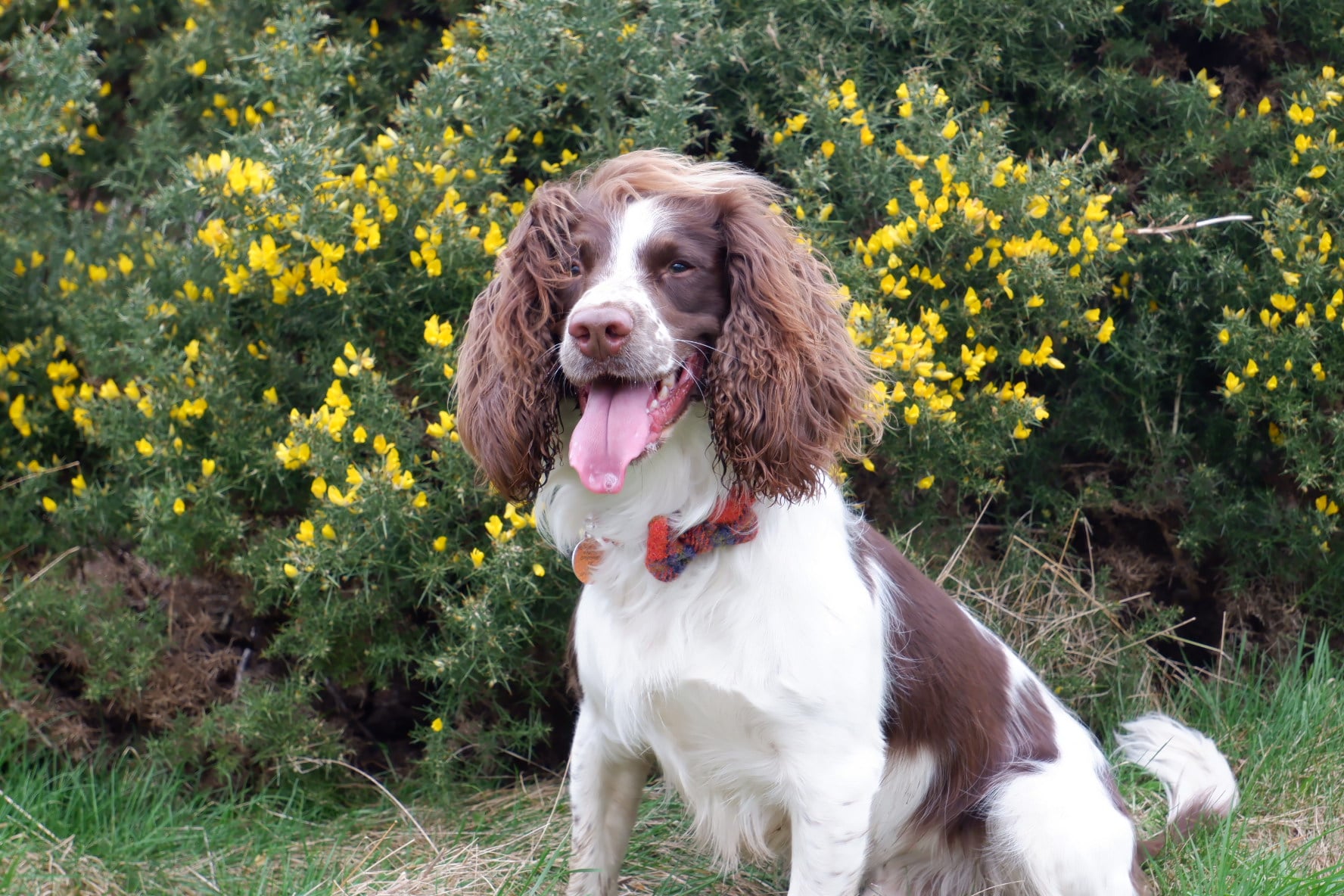 No matter how high voltage your dog’s energy levels, 85-acres should be enough to tire them out. That’s what’s available at Cammo Estate: a former mansion-turned-public park that offers a paw-stretching mix of wide meadows and woodland, overgrown ruins, plus a rather cool old tower (did someone say pooch posing potential?). You’ll find this dog-friendly park in Barnton, on the north-west outskirts of Edinburgh, where the strong-legged can even add on a run at nearby Cramond Beach–an eight-minute drive away. As well as a free car park and countryside vibes, it’s an interesting spot to ponder what led to the decline of the once-grand Cammo House. It’s thought that former owner, Percival Maitland-Tennant, didn’t just have a fabulous name–he also lived there with a staggering 30 dogs. Now, if anyone needed Rover’s dog-walking services… 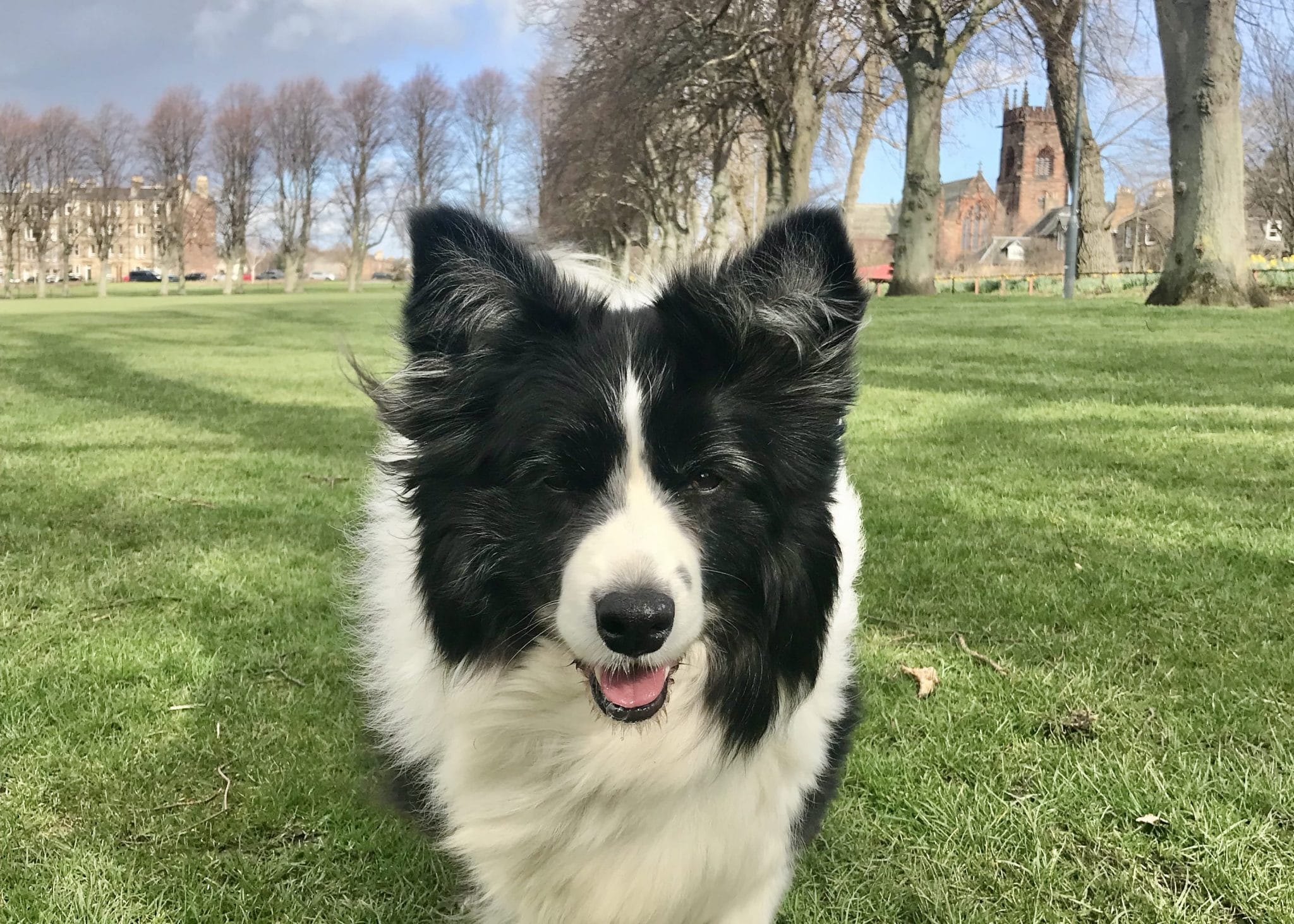 For tail-wagging residents of the Shandon and Merchiston neighbourhoods, an evening session in dog-friendly Harrison Park is the equivalent of us humans gossiping over a glass of wine. Alongside regular dog events and competitions organised by Harrison Park Dogs Facebook community, there’s even an annual Dogs of Harrison Park charity calendar, which came about after human resident Danny Schnitzler was chatting to a fellow dog owner about the volume of doggy photos we have on our phones but do nothing with. Off-lead, there are seven hectares of ball-chasing space in this Green Flag-awarded green zone (one rule: avoid the flowerbeds). On-lead, the  path alongside Union Canal is a great place to walk dogs: spot rowing boats while you stroll, then ensure your budding bird-watcher isn’t eyeing up a snack. 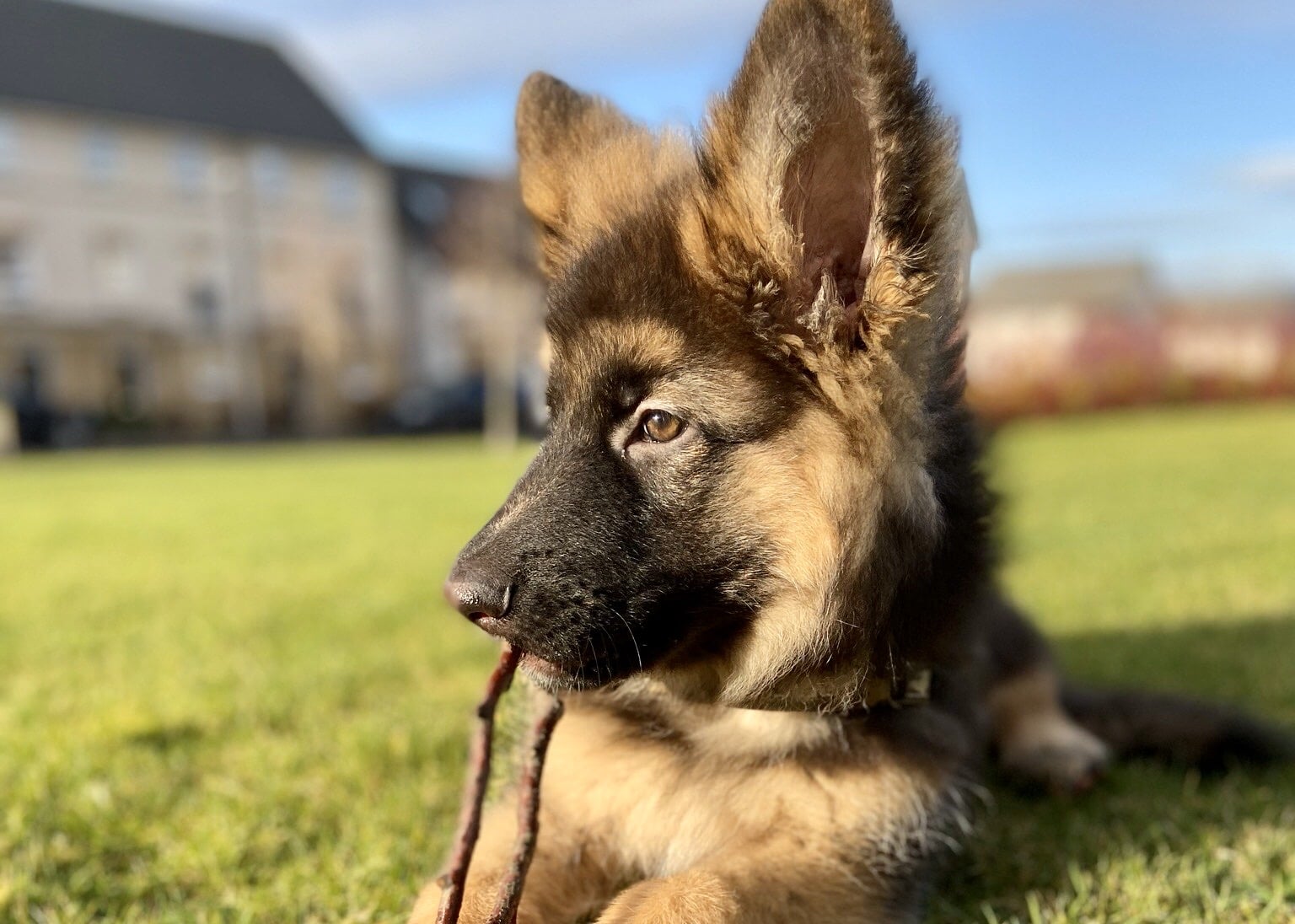 Across from Edinburgh’s Royal Botanic Garden, Inverleith Park has a lot going on: football and rugby pitches, petanque, and even a cricket square. With all those tempting balls flying around, it’s no wonder that dogs love this Stockbridge park. Plenty of trails wind throughout the 54-acre grounds, and pups are welcome on all routes provided they stay on their leads. Elsewhere, the wide grassy fields are 100% pet-friendly – and there’s always a gang of buddies to wrestle with. Thanks to cracking views of Edinburgh Castle and the city skyline, it’s a popular picnic spot. Something that quickly gets noted by the strong-nosed among us. Provided your recall is strong, this shouldn’t hamper your fun–though maybe pack a something tasty to lure any blanket-botherers back with. 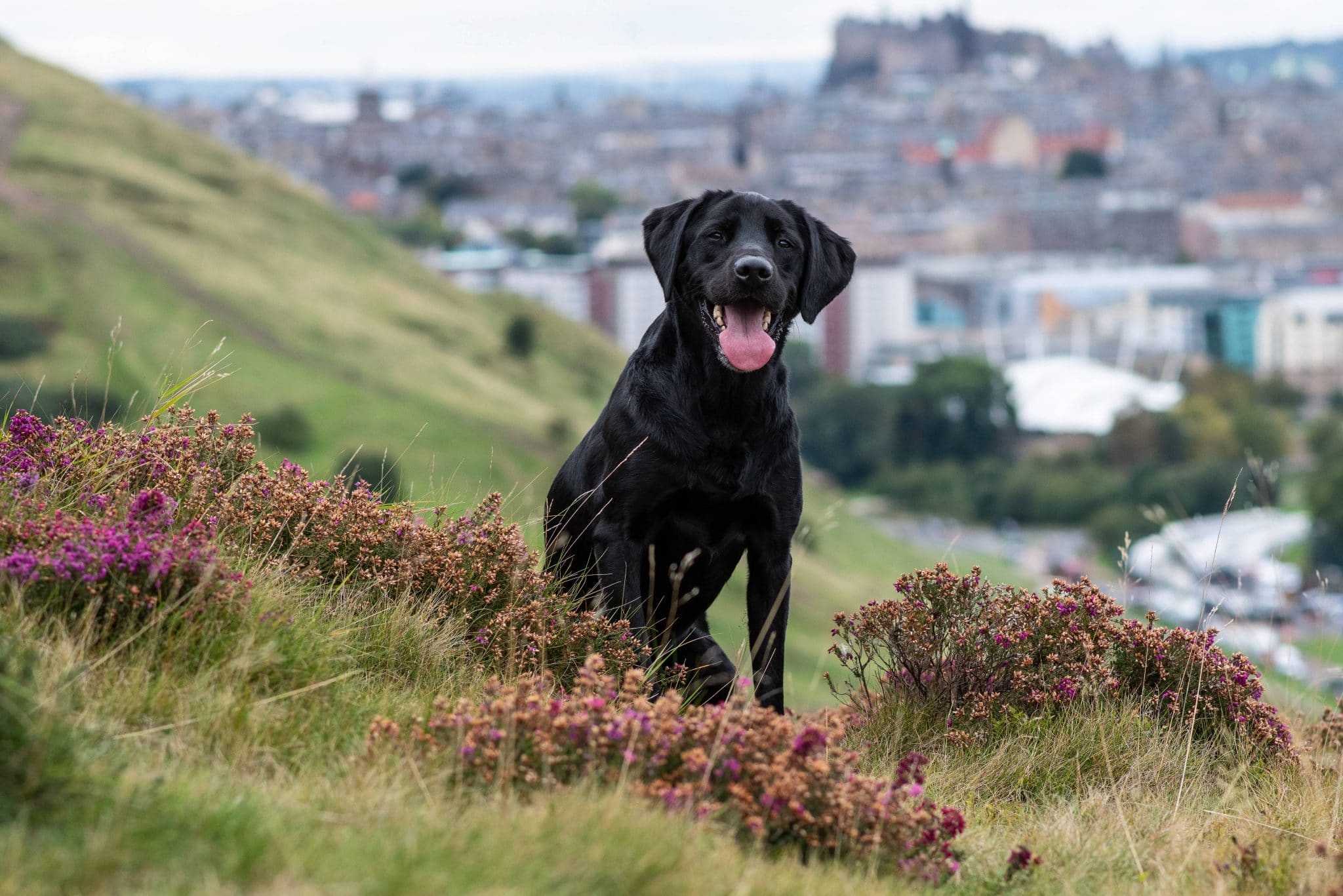 For locals and visitors, Arthur’s Seat is Edinburgh’s most iconic dog walk–great for instilling an in-the-Highlands sense of escapism despite being minutes from Princes Street, and for getting dogs into nap-mode faster than you can say “extinct volcano”. The summit of Holyrood Park’s highest peak towers 251m tall, though you can actually scale it in around 30 minutes. First, fuel up at the dog-friendly Hemma café on Holyrood Road–a healthy, Scandi-inspired lunch joint that has an open-arms policy for hikers, families, and four-legged friends. On the walk down, head towards Dunsapie Loch and into Duddingston Village, where you can soothe your step count at The Sheep Heid Inn. Thought to be one of Edinburgh’s oldest pubs, from 1360 (which feels like the number of metres you’ve scaled), it allows dogs throughout, and does a fine roast and a pint. A tip: for the most dramatic views, pick a clear day, and be warned that it gets blustery at the top. You want to blow away the cobwebs, not the Collie. 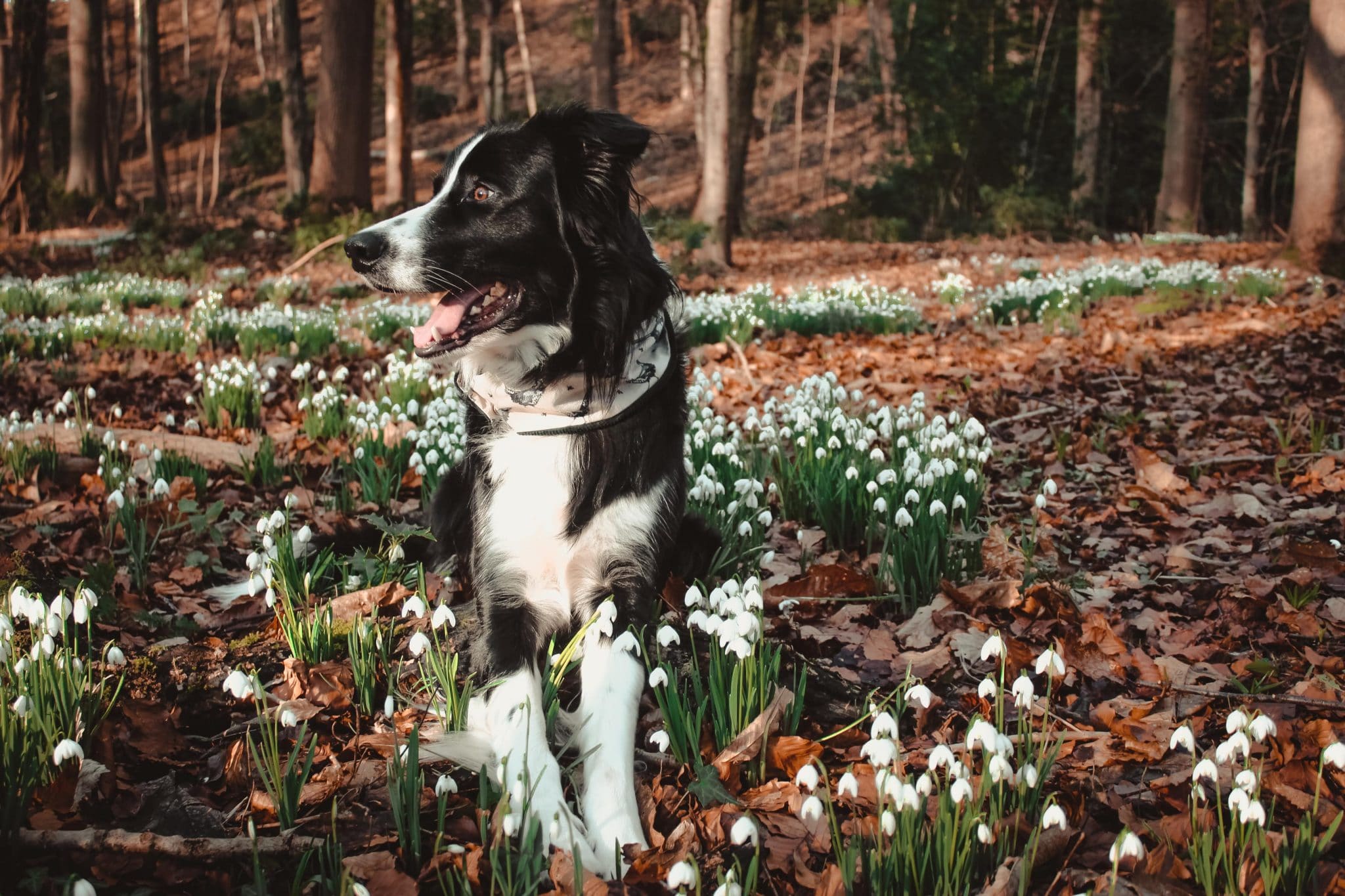 This stunning 1000-acre country park looks like something out of a lavish period drama. Thankfully for Mr Darcy the Great Dane, it’s remarkably drama-free for dogs here: they are allowed to roam everywhere except for inside the store, coffee bar and restaurant. That still leaves a lot of sniffing space, such as near the picturesque snowdrop walk or out towards the park’s outskirts where you can spot deer and horse-riders (just keep an eye on anyone with herding tendencies). Dogs must be kept on their leads in the car park, near the farm, and in Palace field until across Montagu bridge. But eatery and rest space The Restoration Yard­–a pitstop that’s a high-point of any visit–loves a four-pawed pal. There’s even space to sit outside with dogs when the Scottish weather behaves itself. Regular dog walkers should consider the Friends of Dalkeith Country Park Annual Pass–a £20 swipe card that gives access to the park 24 hours a day. 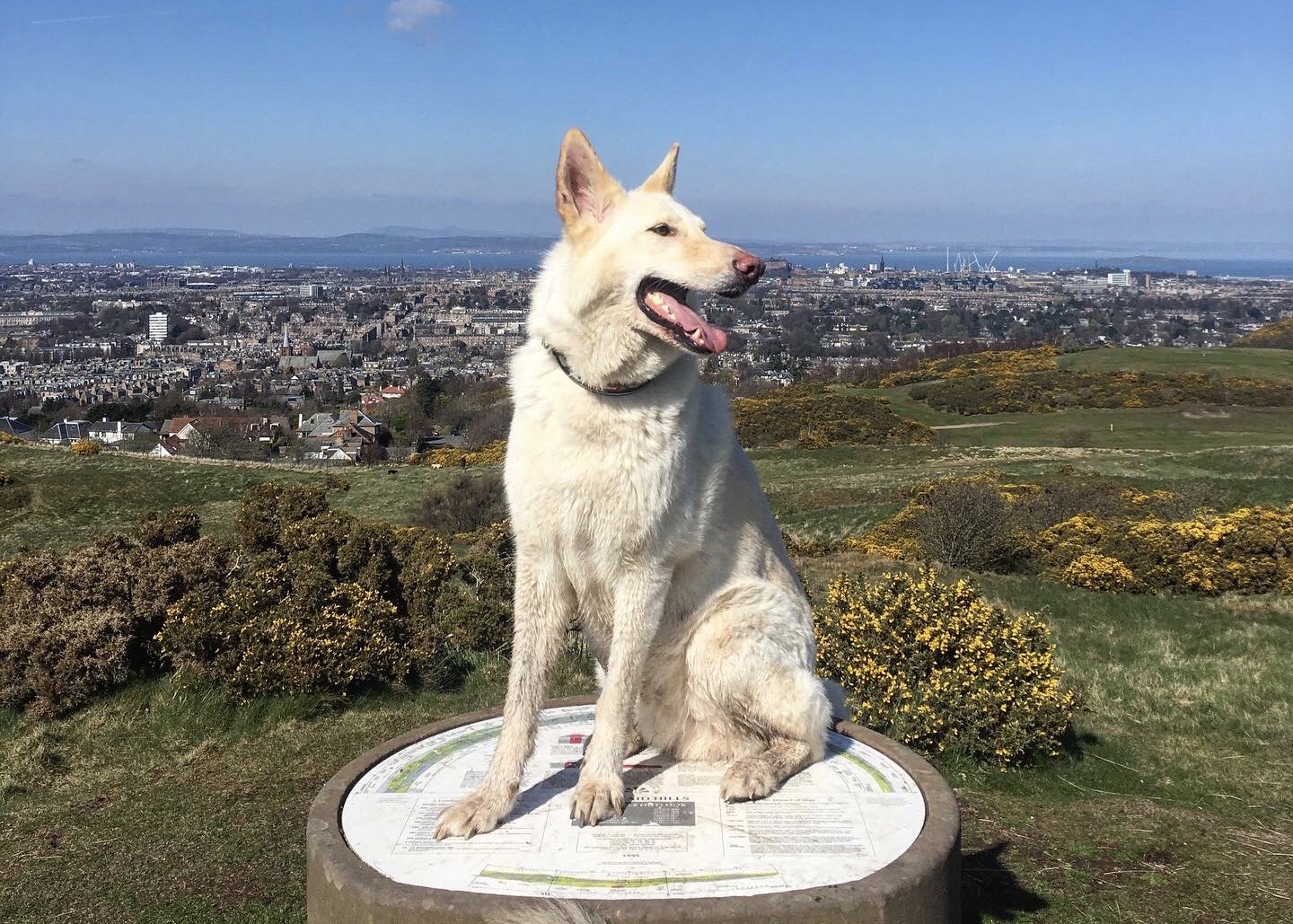 If Arthur’s Seat is the famous choice for an Edinburgh dog walk with views, Braid and Blackford Hills are the insider’s secret. There’s still all the eye candy you could wish for, with a panorama that ticks off Edinburgh Castle, Arthur’s Seat, Calton Hill, and then stretches out to neighbouring Fife. But the added bonus is that this vantage point is considerably quieter, and more sheltered from the Scottish elements. The climb can be steep in places (having four-leg-drive is a definite bonus), but a wide variety of routes means that you can tailor your walk’s length into a short stretch or a hefty hike, depending on how boisterous a certain someone is. Afterwards, grab a reward at dog-friendly pub, The Stable Bar in Mortonhall, which excels in comfort food for humans (the mac n cheese always hits the spot) and a bowl of water and a biscuit for the tail-waggers. 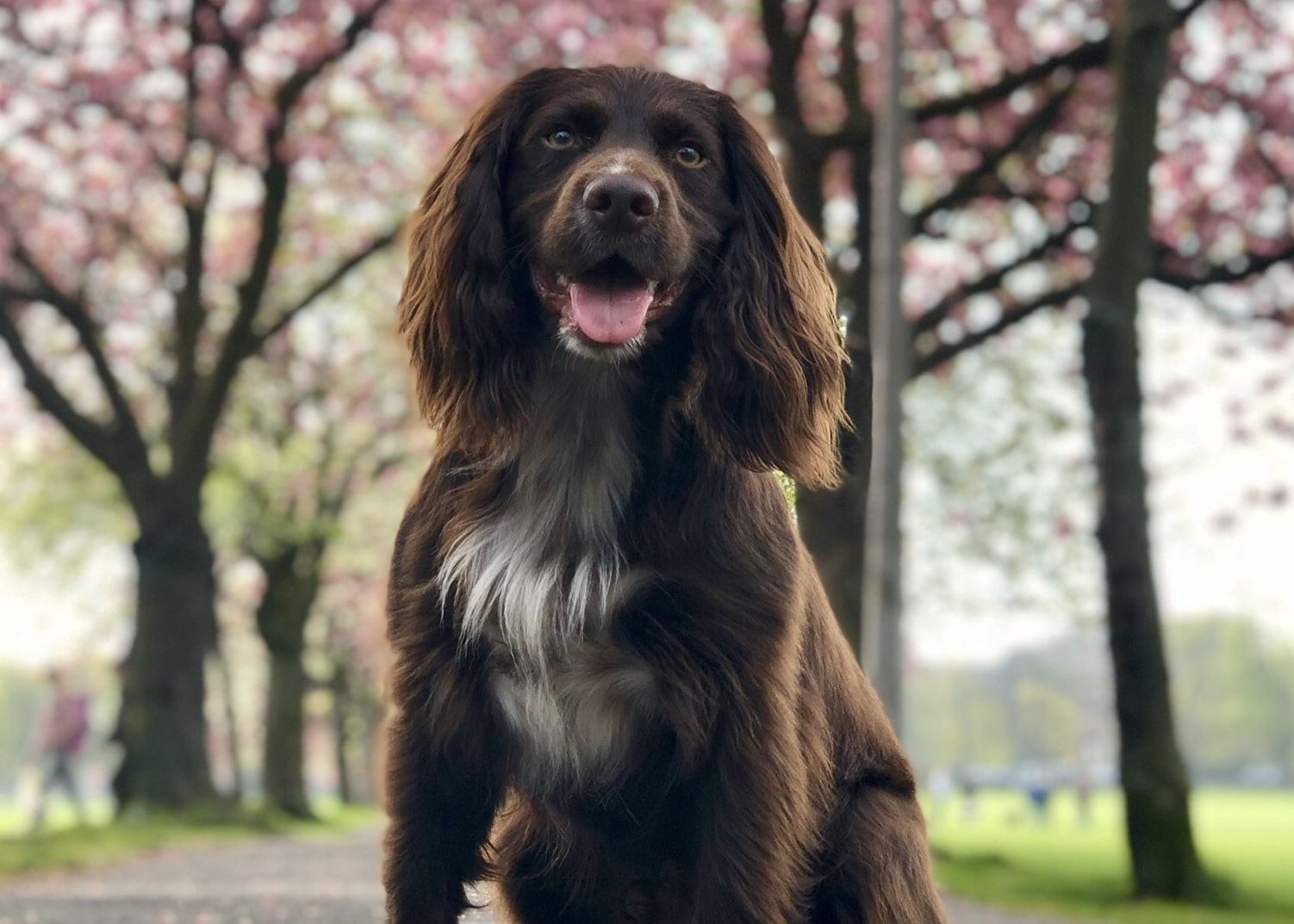 The Meadows photographed by @theedinburghspaniels

Edinburgh dog parks don’t get more central than The Meadows, just south of the Old Town. Its proximity to Edinburgh University makes it a popular student hub, or as we call it: home to on-tap doggy cuddles from willing hands. There are huge grassy areas, playing fields, and a vegetarian and vegan deli called The Pavilion Café–all of which makes it a perfect canine socialisation spot. Like that friend who always wants one more drink, the hard part is getting pooches to leave this epic dog-friendly playground full of great smells (and bottoms to sniff). A highlight is June’s Meadows Festival, when the space transforms into a massive community party complete with live music, food and craft stalls, plus a dog show–with rosettes up for grabs for the best-performing pooches. 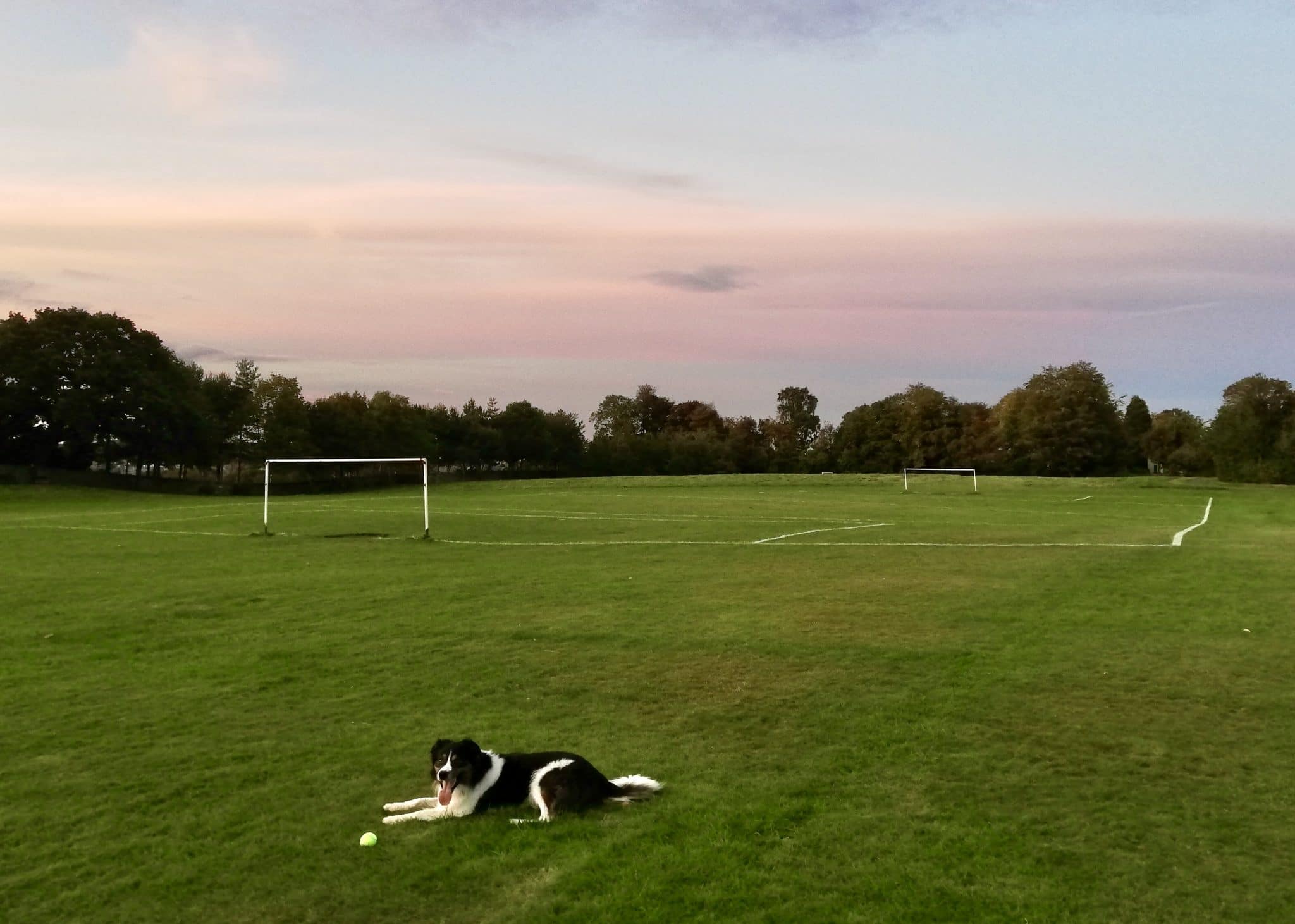 A small spot where dogs can always make new friends, Bloomiehall Park is a fantasy land for playing fetch: compact enough to expend a dog’s energy, but without the risk of losing yet another tennis ball to the wild Scottish scenery. As well as being a great place to walk your dog, Bloomiehall Park has a football pitch (where the referees are on high-alert for furry ball thieves), and an excellent children’s play area, should the whole family be in Duracell bunny mode. You can find the park just to the rear of Juniper Green Village, overlooking Baberton golf course. Or just follow your dog’s lead–literally.

Edinburgh has some great parks to walk your dog in, but when you’re short on time, Rover.com’s trusted dog walkers in Edinburgh will happily flex their frisbee-throwing muscles and make sure your dog still gets the exercise they need in one of the many dog-friendly parks in Edinburgh. 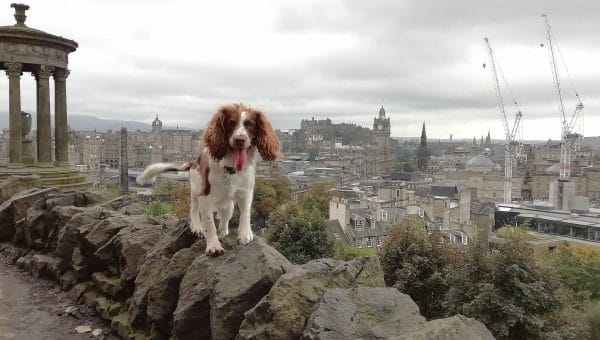 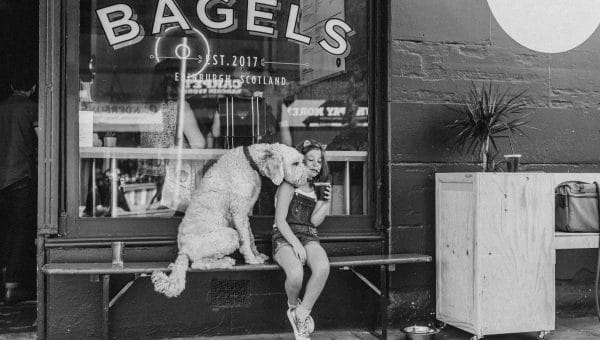 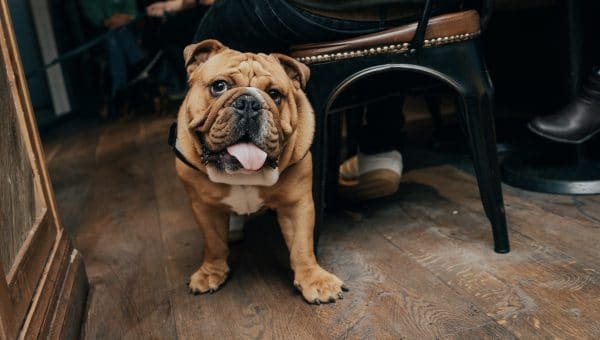