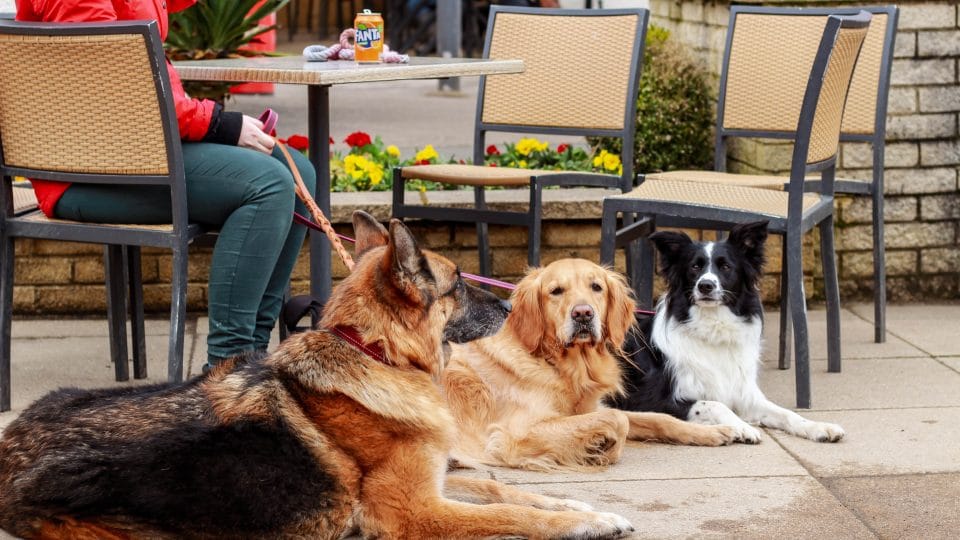 There was a time when a dog’s dinner was not something you wanted associated with your evening meal. These days, however, taking your dog to dinner is a treat. As more restaurants around Yorkshire open their doors to four-legged customers as well as us two-legged ones, eating out with your dog in Leeds has never been more enjoyable–or more varied. These are the dog-friendly places to make a reservation at tonight. 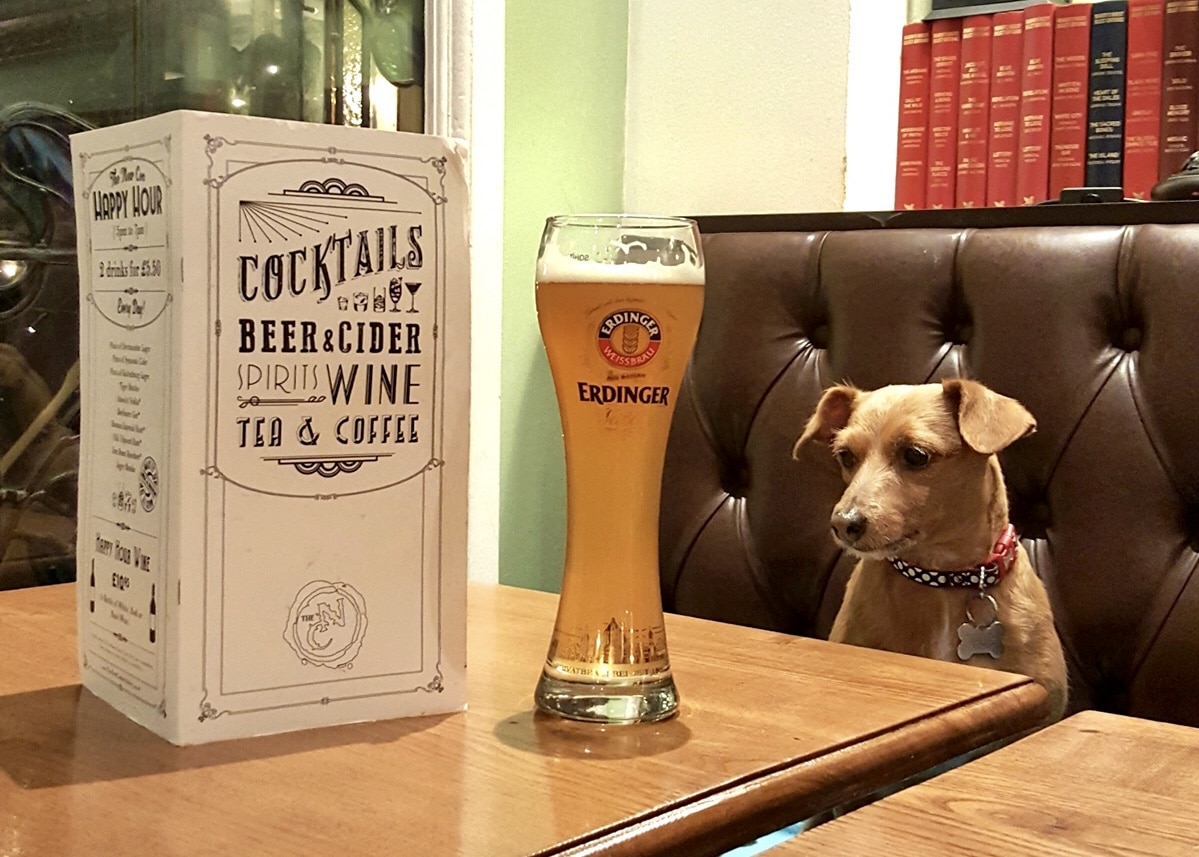 The New Conservatory photographed by @simonellerington

If city centre restaurants have traditionally been the least enthusiastic about anything paw-based entering their establishments, The New Conservatory is the exception. For one, situated just off Albion Street, it’s as central as it gets. Secondly, staff here love dogs so much that they even have a house doggo–a handsome black Lab called Max, who’s been known to dress up for visits by sporting shades and a sports kit. What a dude! Food is great value, giant-portioned, and comforting, with many homemade options, including burgers, lasagne, Sunday roasts, and a rather epic steak and ale stew topped with cheesy mash. The New Conservatory also wins the award for the most legendary length of a happy hour–it’s actually five hours, 5pm to 10pm, every Sunday to Friday. Though with water bowls throughout, it’s always happy hour for your dog here.

The Woods photographed by @forthelove_of_daisy

Many people would agree that there are no two better food stuffs in life than pizza and roast dinners. (Sure, your dog rates pig’s ears, but then they also like sniffing unmentionables, so…moving on). The Woods, a dog-friendly restaurant in Chapel Allerton, focuses on these two food legends–with a compact fixed menu and daily changing specials. The sourdough pizzas are made in a giant oven that looks fresh out of Italy, while the huge Yorkshire puddings resemble golden cumulonimbus clouds. Let’s just say that there will not be many scraps for the dog. Sorry. Dogs are allowed throughout this four-floor venue, apart from on the sofas. Expect cuddling wherever they go; in summer, that’s likely to feature the heated rooftop bar, which has photogenic views over Chapel Allerton. There are also regular live music events, a quirky-cool interior, and the restaurant’s very own beer that’s brewed by Crooked Brewery in Church Fenton. 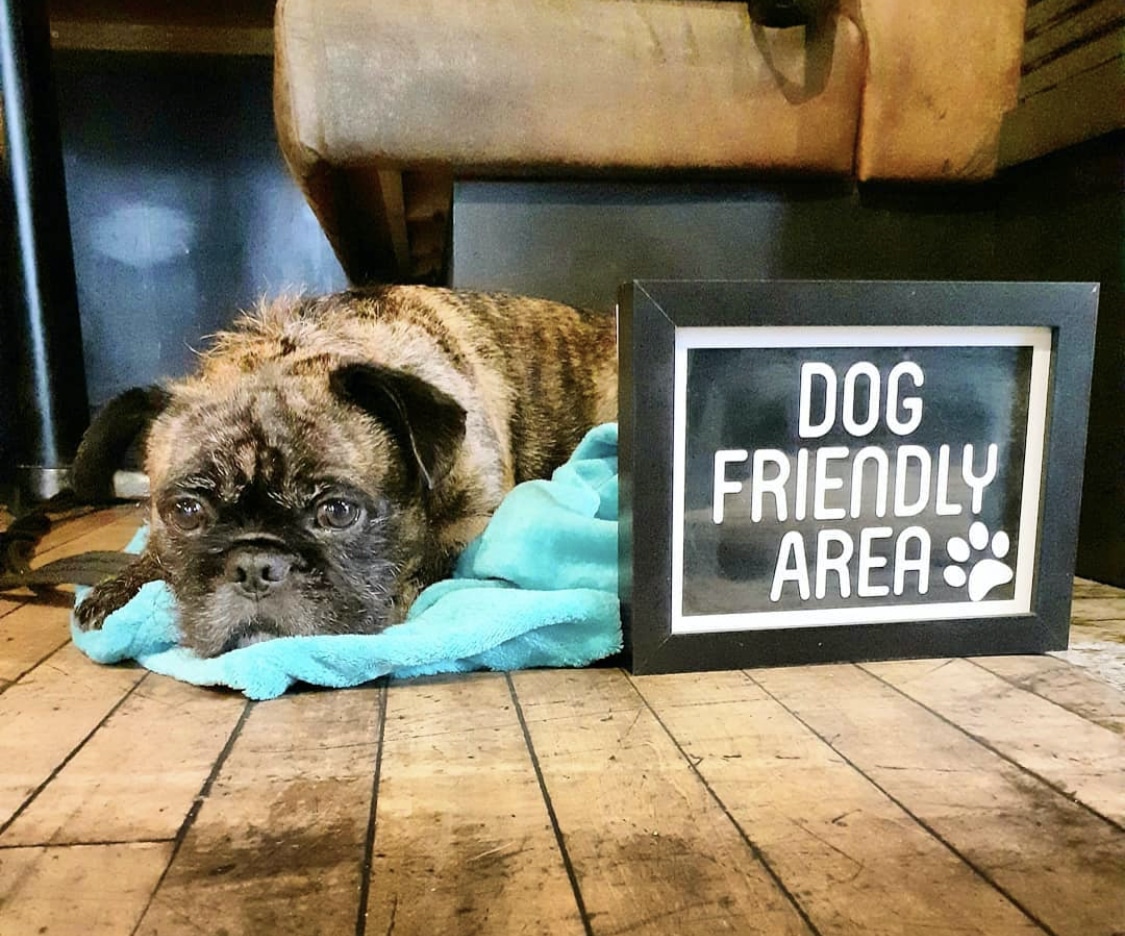 This sleek Spanish tapas bar occupies a prime waterfront spot in the Calls Lane area. Sharing tasty morsels in the sun sounds about as Mediterranean as it can get, and there’s a relaxed attitude to dogs, too, with all well-behaved dogs welcomed in the bar area. It goes without saying that their ears will have pricked up on hearing the word “sharing”, and the food itself does little to deter interest. Alongside Spanish classics such as paella and patatas bravas, there are platters of cured meats (chorizo, serrano ham, lomo Ibérico), fish (anchovies, mussels, calamari), vegetarian bites (artichokes, butter beans, roasted vegetables), plus cheeseboards. Ambiente Tapas also specialises in sherry–offering a taster flight of three varieties for sherry newbies. Which does not include dogs. 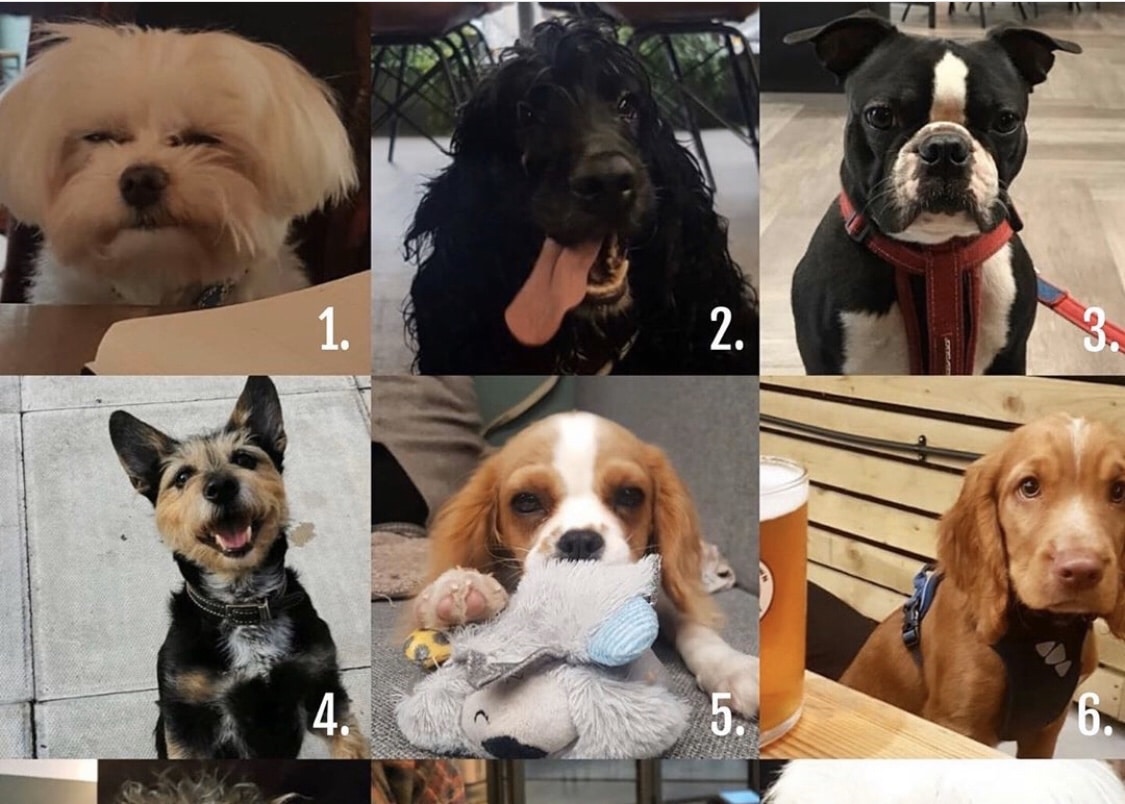 Manhattan vibes in Leeds? Totally possible in this social dining space that combines hipster decor with a kickass rooftop, and has a regular ‘Dog of the Day’ on Instagram (see above). Win-win-win. While it doesn’t have a traditional, formal restaurant feel, food is an essential part of the experience here. The menu in the downstairs café evolves throughout the day, with avocado toast and buttermilk pancakes in the morning, salads and well-stuffed wraps for lunch, and evening sharing boards that span cheese, meat, vegan options, plus hefty scoops of homemade hummus. It’s 100% dog-friendly, too. Staff are especially happy when dogs come in, serving up fuss, treats, and cuddles alongside their owners’ pints. Keeping to the ‘social’ part of its name, East Parade Social even held a recent Bow Wow Brunch, with pawsecco, doggy stalls, a bottomless brunch, and more treats than even a cocker spaniel could wag its tail at. 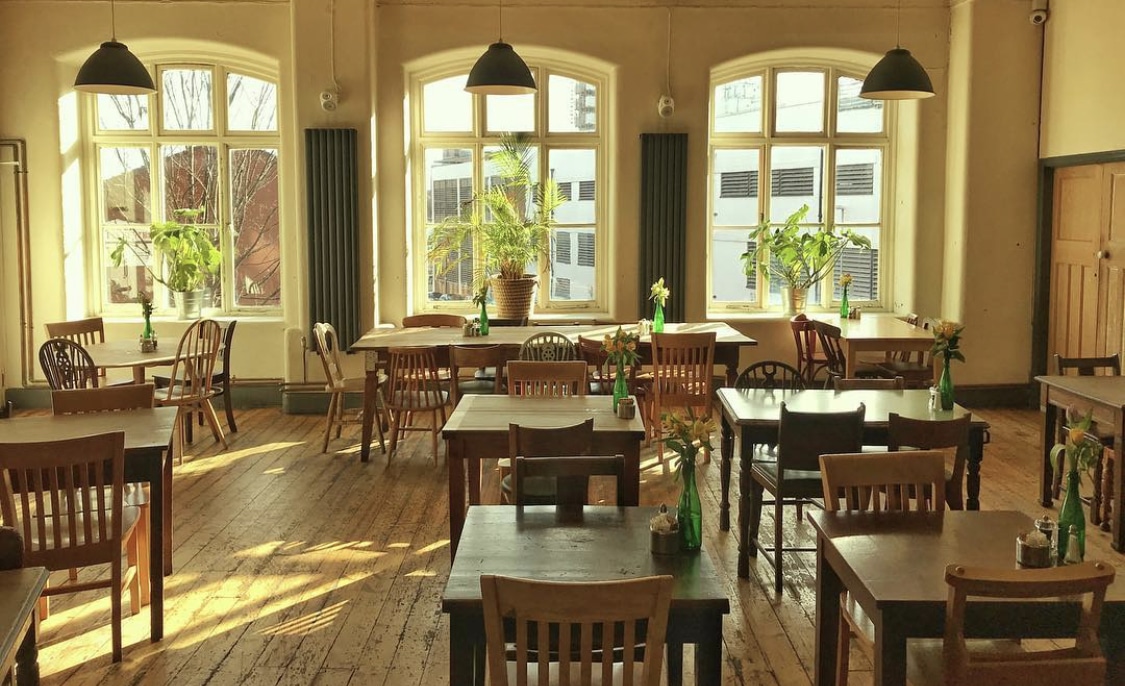 After a chase around the small neighbouring green space of Lovell Park, The Reliance offers beautifully prepared, seasonal meals and welcomes dogs (who’ve wiped those paws) into the bar and lounge areas. There’s a full food service throughout those spaces, plus water bowls, with two main specialities. The first is a casual charcuterie, made using rare breed pork from Thirsk that’s been cured on-site in The Reliance’s own curing room. Good luck getting a platter of hams and salami past a certain someone’s quivering nose. The second food option is from the a la carte menu, which features elegant main dishes, such as plaice with shrimp butter and samphire, wood pigeon breast, and braised root vegetables with bulgur wheat. Yes, that nose is still interested. 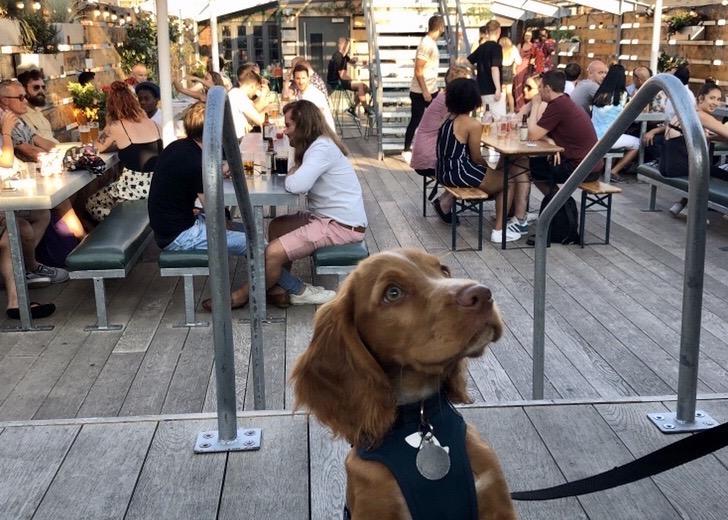 Steak and chips for £5 is the signature special of this multi-space eatery–a mix of food space, beer hall, gig location and sceney rooftop–where fluffy pals are not just welcomed, but are often rewarded with a starring role on Headrow’s Instagram page. The action happens over four floors, in what was previously a textile mill. Standout features include the beer hall’s collection of four tanks of unpasteurised Pilsner and 60 international beers, plus the upstairs terraces–where you can while away a relaxed evening, and your dog has space for a leg stretch when it needs it (also known as flashing puppy eyes at other people to attract more cuddles). With attention, chilled vibes, and skyline views of the rooftops of Leeds’ Victoria Quarter, this fun place is owner- and dog-friendly.

It’s great news that so many restaurants in Leeds now encourage you to dine with your dog. But if dinner falls past your dog’s bedtime, or you fancy an evening meal without a little head resting on your knee, Rover.com’s dog sitters will take the lead–literally. With dog walking, house sitting, and day care on offer throughout Leeds, Rover’s team will jump in and provide exercise and company for your dog whenever you need it.