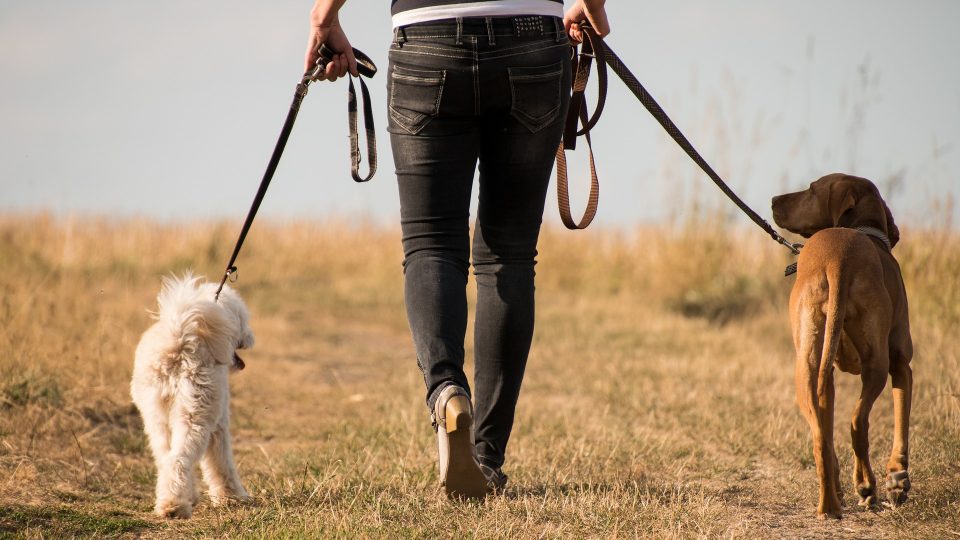 Do you walk your dog, or does your dog walk you? Unfortunately, many dog owners struggle with what is supposed to be a fun activity with our furry friends. We’ve got some handy strategies for you from dog trainer and founder of The Pooch Coach, Beverly Ulbrich.

Pro tip: share these with your dog walker so you’re both on the same page.

Any seasoned dog owner or walker has seen it, or maybe even suffered through it—dogs straining on the lead, pulling their human in all different directions. There may be a number of factors at play, but often pulling is due to a lack of focus and excitement on the walk. 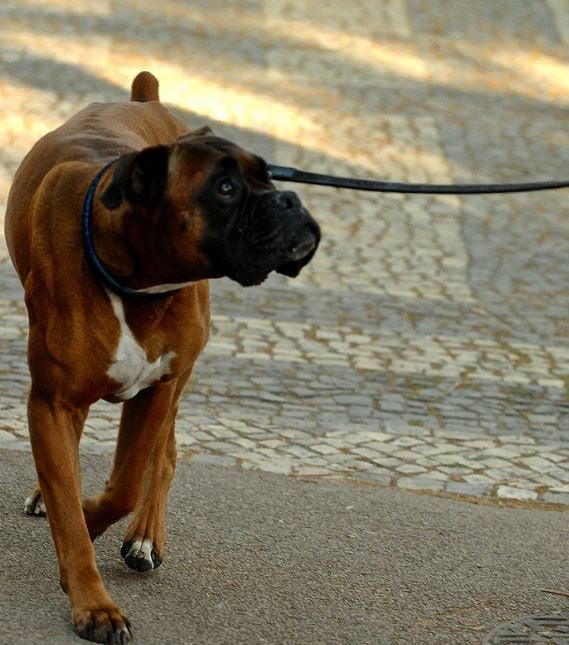 Make sure your dog is paying attention to you on the walk, not everything around you. Image via Flickr.

“If you’re walking slowly with no energy, who is going to follow that and be interested?” Ulbrich asks. “Anything is more interesting than you at that point.”

Trainer Tip: Keep the lead really short and make unpredictable movements—stop, start, and turn. Make the dog realise he has to pay attention to you because he doesn’t know what’s going to happen next. This way, he has to follow you to keep up.

It may also be time to go back to training him the basics and properly teach your dog the heel command.

Trainer Tip: If you’re in the house or a safe, quiet off-lead area where you want to work with your dog, take a squeaky toy, ball, or biscuits—anything that’ll keep your dog’s interest. Keep it by your side and as your dog follows by your side, give them the treat and say, “Good heel!”

“This works better in an undistracted environment like your house or back garden, but not walking down the street or at the park,” Ulbrich says.

Does your dog want to stop every five feet on a walk to sniff, dig, or mark his territory? This might be due to the type of lead you’re using—a retractable lead where your dog can wander far away or a harness where you have no control over his head are not ideal. 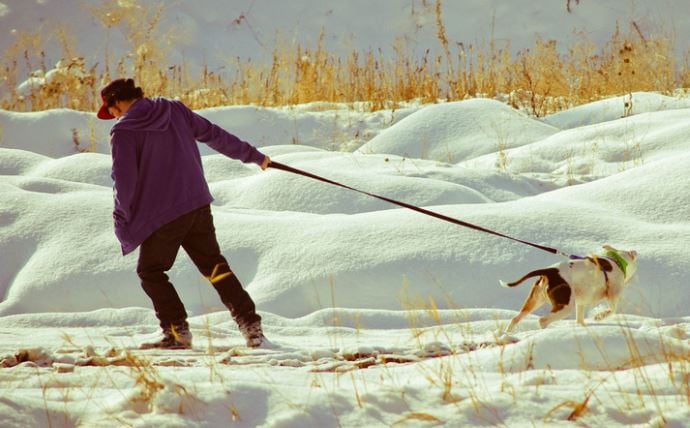 You should not allow your dog to decide when and where to sniff. Help him walk with purpose, which is natural for pack animals. Image via Flickr.

“The two biggest problems with these types of leads are leaving too much slack on the lead and a lack of control,” Ulbrich says. “You have to teach the dog to follow you, which goes back to the method of preventing pulling.”

“Walk to your destination—say the dog park—let them sniff and play, and walk home again,” Ulbrich explains. “The path to and from the destination should be completely work-related.”

Ulbrich says this is the nature of pack animals, called the migration path.

“By following this method, you’re recreating that structure in the dog’s life that every pack animal needs,” Ulbrich adds.

Some dogs pause during the walk and refuse to continue. They are simply frozen in place and no amount of coaxing seems to work.

What not to do:

Stopping mid-walk can often occur with fearful dogs, perhaps rescued animals. Some dog owners notice their dog’s natural instinct is to run back towards the house, so the walk home is always smooth.

“Have a friend drive you and your dog a few streets away and drop you both off, so the entire walk is coming back to the house,” Ulbrich suggests.

“Over time, increase the distance. Slowly break them of their fearful habits until they learn walks are fun and not scary.”

Getting off on the right paw is crucial to teaching a puppy proper lead etiquette—and the sooner, the better. 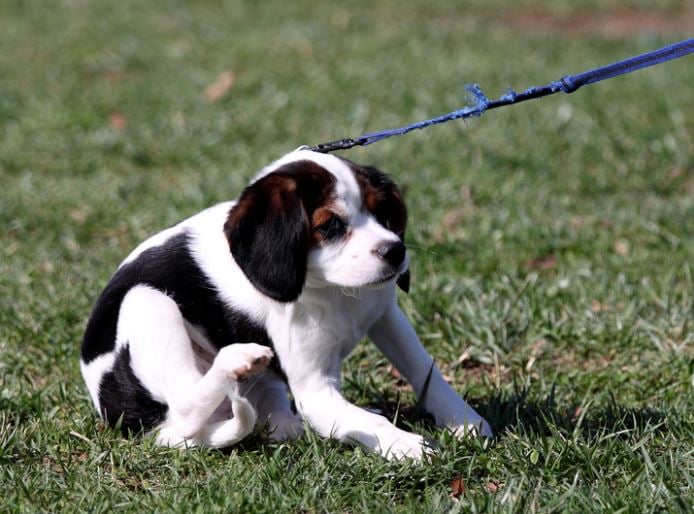 Introduce your puppy to the lead as soon as possible so they get comfortable with it. Start them in the house, then the garden, and eventually outside. Image via Flickr.

“As soon as you get your puppy, put him on a lead in your house and play inside,” Ulbrich says. “If you wait several days or weeks to introduce the lead, they’re going to be confused as to what it is and fight to get it off.”

Once your puppy is used to the lead in the house, walk them in the garden, eventually progressing to walks outside. If your puppy starts to pull on the lead, Ulbrich suggests the game “red light-green light.”

“When a puppy starts pulling, you stop dead,” Ulbrich explains. “The dog learns pulling makes you stop, which is the opposite of what he wants.”

“When a puppy starts pulling, you stop dead,” Ulbrich explains.

Ulbrich notes this method only works with puppies and not with dogs who are already pulling.

“It’s too late if a dog is already pulling,” Ulbrich adds. “Those dogs think it’s a game of pull-stop, pull-stop.”

Our furry friends need the exercise and stimulation that walking provides on a daily basis. If your schedule doesn’t allow it, book a great dog walker (luckily, that’s never been easier.)

“If your dog isn’t walked every day, that’s going to cause problems,” Ulbrich explains. “They’re going to be so eager to be out that their energy level is too high and they’ll walk erratically and pull. If they go out often, it’s not as big a deal and they’ll be much more calm.”

But how you walk is just as important as how often!

Check out this video by Ulbrich, The Pooch Coach, for more tips on walking: 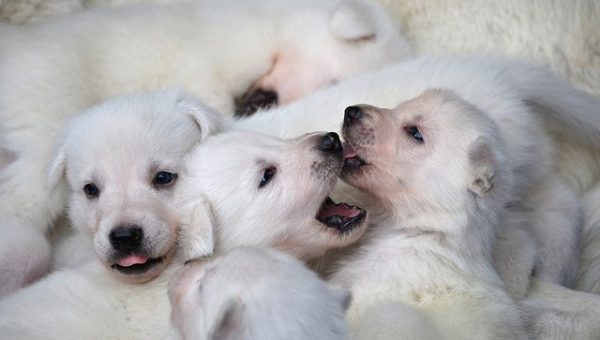 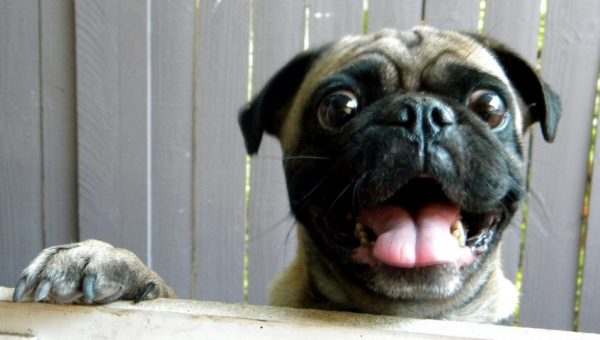