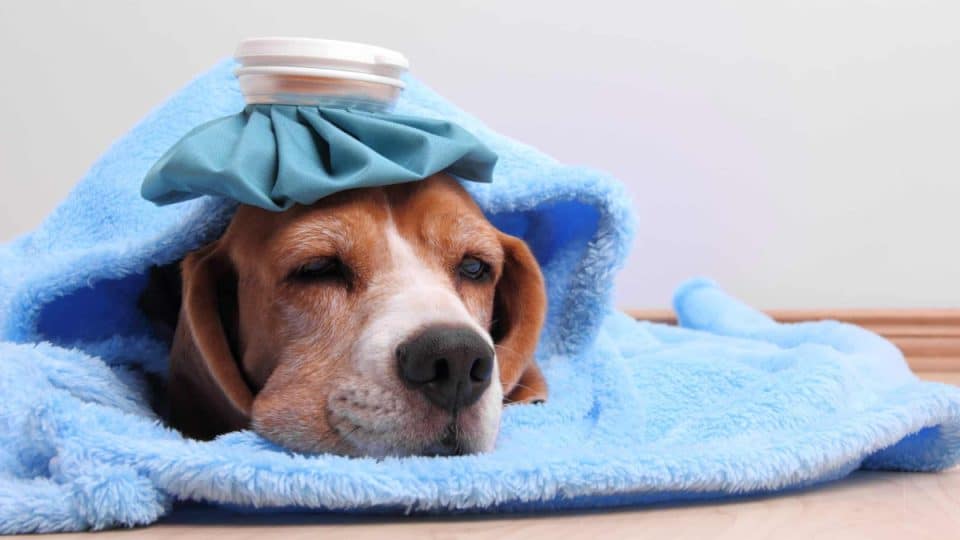 When your dog gets a runny nose, it can cause concern. However, there are many reasons for a dog’s runny nose—and some of them are perfectly healthy. For example, if your dog’s nose is running clear, it’s usually nothing to worry about. But there are also times when it could be a sign of illness, so a trip to the vet is essential.

We all know that dogs are big sniffers, with a sense of smell that’s much more sensitive than a human’s. But did you know that while we have only around six million olfactory (smell) receptors, dogs can have up to a whopping 300 million? Plus, the part of a dog’s brain that analyses smells is about 40 times bigger than ours! Therefore, it goes without saying that a dog’s nose is very important to him—so a dog’s runny nose can be even more irritating than a human one.

1. Your Dog Has Allergies

Just like with humans, allergies can be quite common in dogs and generally will start to appear after the age of about six months. So if your dog has a runny nose during high season for pollens from trees, weeds or grasses it’s a good bet she’s suffering from inhalant allergies. These could be combined with other symptoms, such as:

Treatment for allergies in dogs

The best way to test what your dog is allergic to is to take him to the vet for some blood tests. Then once you get his results, you’ll be able to remove the triggers as much as possible. For example, if your dog is sensitive to grass pollen, make sure to take her on urban walks during grass pollen season.

In some cases, your vet may even prescribe some antihistamines to clear that runny nose up; remember, these are special antihistamines for canines, and you should never try human medications on your dog without professional advice. 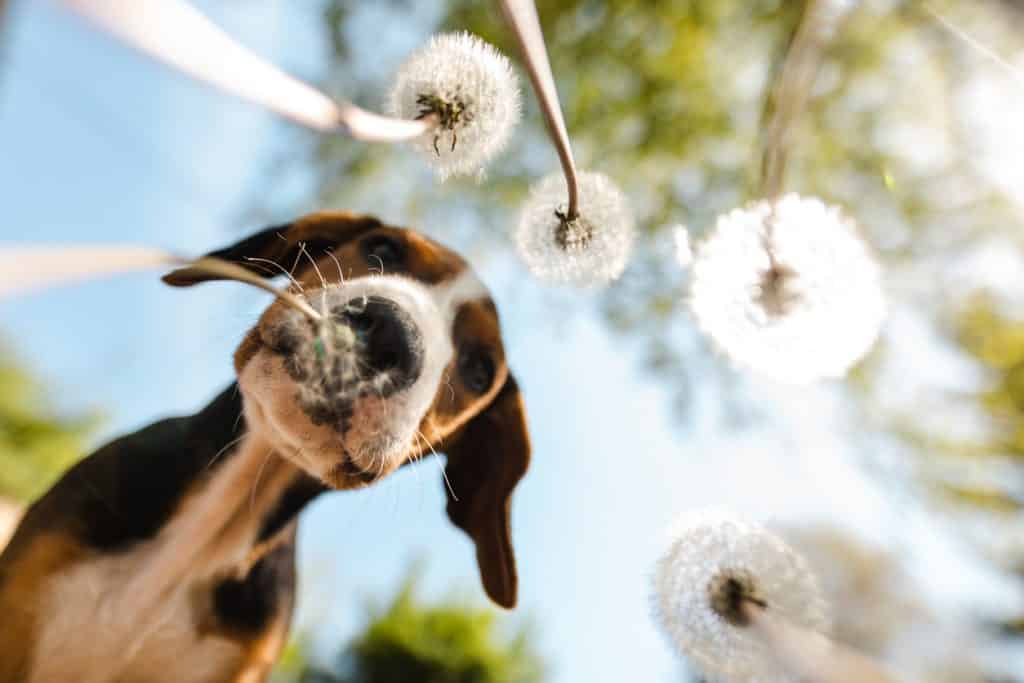 2. Something’s Stuck In Your Dog’s Nose

Dogs spend a lot of time with their nose to the ground, sniffing out everything in sight. And sometimes your dog might sniff a little hard and get something stuck in his nose, causing a blockage. Think leaves, grass, seashell fractions, or tiny pieces from a lego set. Other things that indicate something is stuck include:

Treatment for blockages in your dog’s nose

A great way to tell if something is blocking your dog’s nose is to put him in front of a mirror. If they exhale and the mirror steams up more on one side than the other, the weaker side is blocked! Of course, if your dog’s runny nose is being caused by a blockage, you simply need to get it removed. You can try this yourself with your fingers or some sterile tweezers at home. But if you can’t get it yourself, it’s time for a trip to the vet.

There are a couple of different strains of canine influenza, and luckily neither is particularly lethal—most severely affecting dogs who have concurrent illnesses. However, as we know, a bout of the flu is never nice and can come with some nasty symptoms:

As with human flu, dog flu is pretty contagious, so your dog could pick it up from another pup at the park, groomers, vets, or anywhere else he sees his four-legged buddies.

Treatment for the dog flu

A mild case of the flu will clear up in time with lots of rest and extra cuddles. But if your dog’s flu seems to be worsening or you start to notice a coloured discharge from your dog’s nose, it’s important to get in touch with your vet. They will then assess and provide any necessary medications to help your dog get over the flu, such as antibiotics, anti-inflammatories, or an IV.

4. Your Dog Has An Infection

If your dog has an infection in his sinuses you might notice coloured mucus or pus coming out of his nose. It could be bacterial, fungal or viral and come with other symptoms such as:

Treatment for an infection

If you suspect your dog’s runny nose is due to infection, it’s important to take him to the vet. They will prescribe antibiotics or antifungals depending on the cause of the infection, and in some cases, surgery might be needed if the infections are chronic. 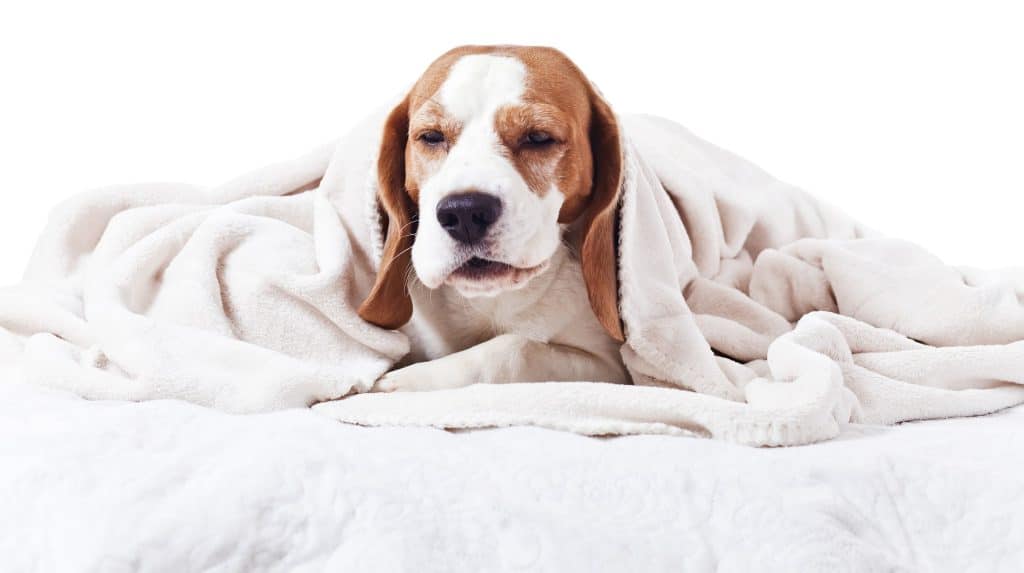 5. Your Dog Has Distemper

A common cause of a puppy’s runny nose can be a serious condition called distemper. While puppies and younger dogs are able to overcome it, it’s important to ensure that when you get a new puppy they’ve had their full set of vaccines—which will include the puppy distemper vaccine.

The symptoms can be similar to a cold, but distemper is much more serious and can lead to pneumonia. Look out for:

If your puppy has a runny nose and you suspect it could be distemper, it’s crucial to get them to the vet right away. They may need to settle in for a stay at the vet for inpatient care, and recovery can take several weeks. The vet will then administer medications to help ease symptoms and ensure they are comfortable during their stay.

You should also be prepared as puppy distemper can be fatal, which is why it is so important to get them vaccinated as soon as your vet recommends. There are also boosters for adult dogs that you should speak to your vet about if you welcome an older canine into your family. It’s one of many preventable diseases in dogs.

6. Your Dog Has Kennel Cough

Kennel cough is the common name for infectious tracheobronchitis, which is very contagious and affects your dog’s windpipe (trachea). As you might have guessed from the name, the most common symptom of this is a cough, but a dog runny nose is another standard complaint.

If your dog is in regular contact with other dogs at the boarder, kennels, groomers, or even at the play park, it’s a good idea to ask your vet about the kennel cough vaccine. Dogs can have this yearly from a young age, but of course, like all vaccines, it’s not 100% effective.

Therefore, if your dog does contract the illness, you can take her to the vet for a check-up. Viral infections will be left to run their course, but if it’s bacterial your vet will most likely give you a course of antibiotics to clear it up. Vets can also prescribe cough suppressants and anti-inflammatories to help provide relief.

7. Your Dog Has Nostril Problems 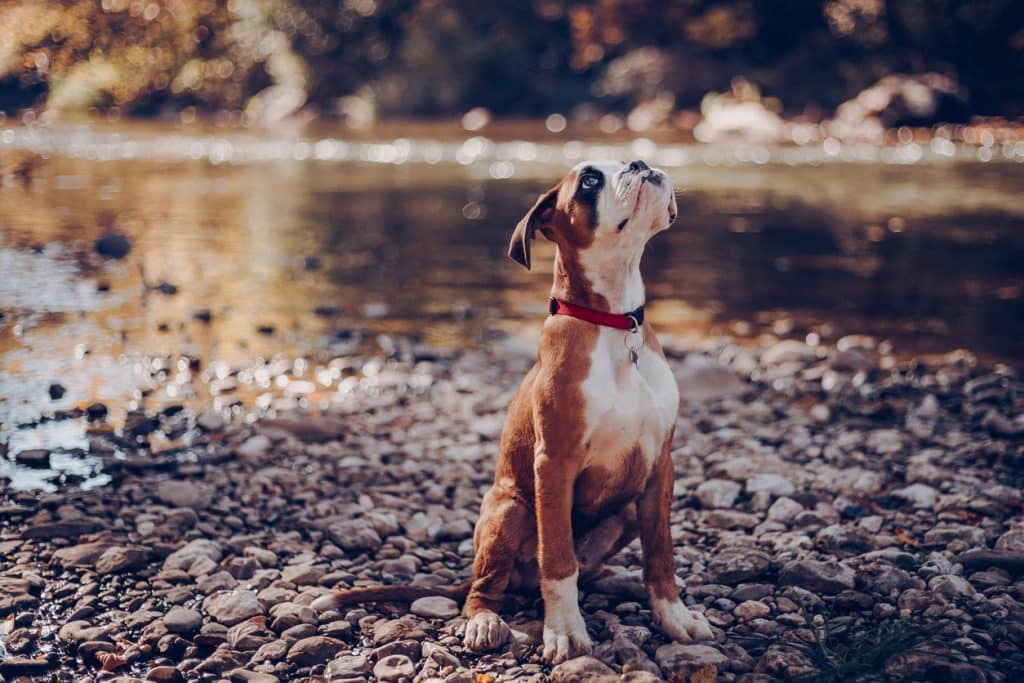 Do you have a dog with a flat face like a Pug, Frenchie, or English Bulldog? Then a runny nose from nostril problems can often be par for the course, along with other respiratory issues. More formally known as brachycephalic airway syndrome, symptoms of nostril and breathing problems with these breeds can include:

If your dog has mild symptoms, these can be managed by controlling exercise levels and avoiding the heat, and investing in good air conditioning (in hot weather). Obesity can also worsen symptoms, so if your dog is overweight, it’s a good idea to put him on a diet, as losing a few pounds will provide some relief!

On the other hand, if your dog’s symptoms are quite severe, your vet may recommend surgery. This can improve breathing and prevent that runny nose from causing further discomfort.

8. Your Dog Has Polyps Or A Tumour

While nasal tumours account for only 1-2% of tumours in dogs, the sad news is that the vast majority of them are malignant. Generally affecting older dogs, around the 10-year mark, they are also more common in males. The tumours or polyps can cause a dog runny nose due to increased density of the nasal cavity and bone destruction impacting the airways.

Symptoms to look out for include:

Treatment for polyps or tumours

Unfortunately, untreated, dogs with cancerous nasal tumours will only survive three to five months. Another reason why it’s so important to take your dog to the vet for regular check-ups. When spotted early, these tumours or polyps can be treated by:

Your vet will talk you through the best options for your pup and make sure he gets the best treatment possible, according to your wishes.

9. Your Dog Has Nasal Mites

Ever had a nightmare about creepy crawlies coming out of your ears or nose? Well, while rare, in dogs, the nightmare can actually come true. Nasal mites can be caught from other dogs through both direct and indirect interaction and show the following symptoms:

There are, unfortunately, not currently any approved drugs to treat nasal mites specifically. However, there are various suggested treatments your vet can try including ivermectin and milbemycin oxime, as well as empirical therapy. Note that ivermectin can be lethal to dogs with certain gene mutations, more commonly found in herding breeds, which your vet will be able to test for.

10. Your Dog Is Regulating Their Body Temperature

Dogs aren’t as adept as humans at controlling their body temperature, so a runny nose can sometimes be a sign that they are struggling to keep cool. This will likely be combined with heavy panting in hot weather or post-exercise.

Treatment for a high body temperature

You can help your dog by ensuring they have lots of water available to drink and finding them a cool area to have a rest.

11. Your Dog’s Runny Nose Is Due To Genetics 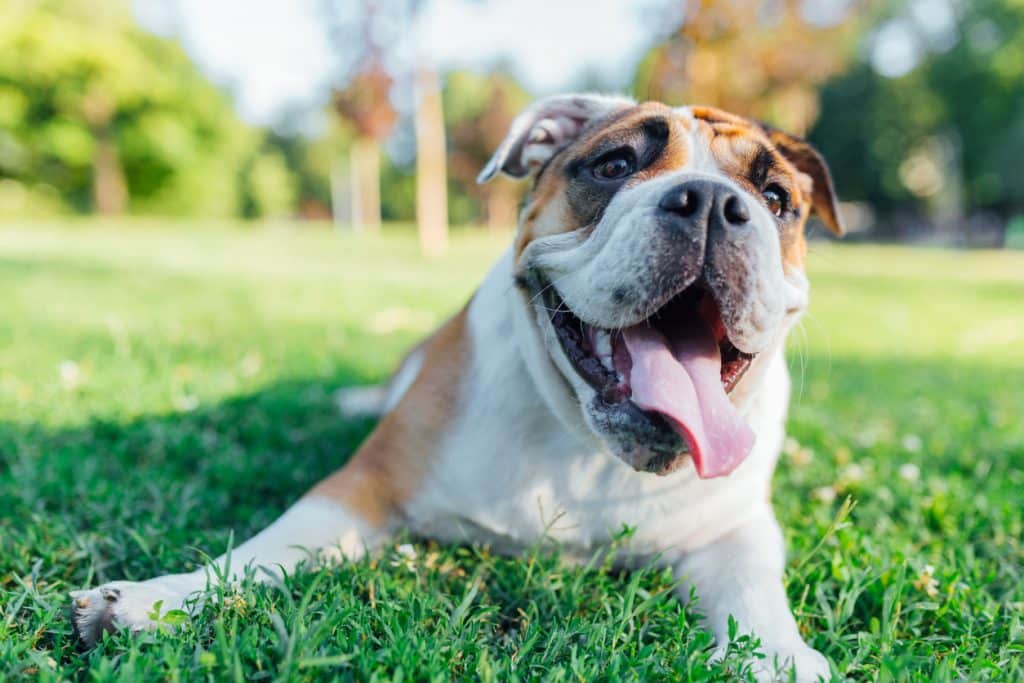 As mentioned above with nostril problems, there are some breeds of dogs that are genetically more prone to getting a runny nose. This is generally brachycephalic or flat-faced breeds like Pugs, Frenchies, Shih Tzus, Boxers, English Bulldogs, Boston Terriers, and so on.

If you have a flat-faced dog that’s suffering from a runny nose and is otherwise healthy with normal breathing, it’s usually nothing to worry about. However, these breeds can also be susceptible to cleft palate, oronasal fistula, and stenotic nares, so it’s important to get them checked over by the vet as these issues can require surgical intervention to correct.

How Can I Soothe My Dog’s Runny Nose at Home?

There’s plenty you can do to help your dog at home, including the following.

For more information, check out our guide to taking care of your dog with natural remedies. Of course, any serious causes of a runny nose need to be seen by the vet, so make sure to get your best four-legged friend checked out ASAP if you’re at all worried.

When Should I See A Vet?

When you take your dog to the vet, they’ll complete a full physical examination and go over your dog’s medical history. They’ll examine the nose, ears, mouth, and throat and will check lungs their heart and lungs with a stethoscope. This will help them determine what could be the cause of the matter and signify whether any further diagnostic tests or screenings are necessary.

At the end of the day, it’s always best to seek advice from your vet if you’re worried about the health of your dog or puppy. And especially if your dog is distressed, a visit to the vet should be your first move.