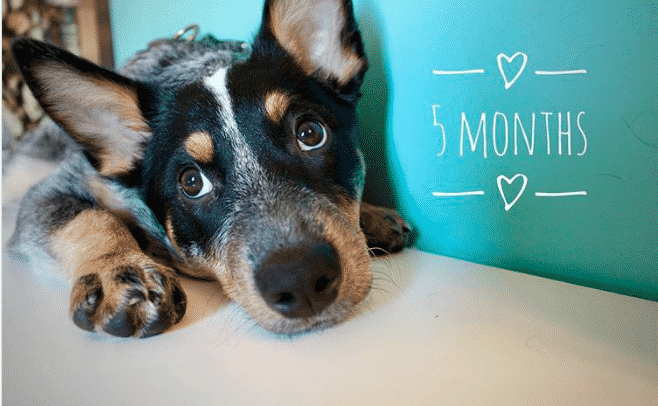 Nothing tugs at the ol’ heartstrings like a puppy. From their wiggly wee bums to their gorgeous little noses, puppies send our human emotions into overdrive. But what about their emotions?

Puppies go through emotional development alongside their physical growth. During the first 12 months of life, they learn what they like, what scares them, and what makes them feel safe in the world. They also learn how (and who) to love. By understanding your puppy’s emotional development, you can prepare them for a long, happy life.

The First Two Months: Learning How to Puppy

Your puppy’s first stage of emotional development starts with their mama. During the first three weeks or so, when their eyes are still shut, their whole world is the safe, warm presence that feeds and bathes them. At this stage, your puppy primarily experiences physical feelings (hunger, warmth, cold, etc.).

The fourth and fifth weeks of your puppy’s life are their “exposure period.” You can think of it as the time when they learn how to be in the world. At this stage, they’re able to use their senses of sight and hearing. Their brains are growing, and they’re learning all sorts of new stuff from their mum and littermates: how to walk, how to play, and how to explore the world. They learn social skills, and are ready for consistent human interaction.

By the start of their second month of life, puppies are developing emotions. And at 6-8 weeks old, they start forming attachments to humans. At this point, they can be separated from their mother and go to their new home. Now is the time where you take an active role in your puppy’s development! Help your puppy bond to you and your family by providing a safe, secure, positive environment. It’s also time to start socialising them with other people and dogs!

The third month of your puppy’s life an important stage for bonding and training. At this age, they’re an information sponge, soaking in everything they experience. Emotionally, they’ve developed basic emotions like happiness and fear. This is when your dog forms their strongest human attachments, so it’s important to make sure they have positive associations with you!

During their third month of life, puppies go through a “fear imprint stage.” Their brains are developing quickly, and negative experiences can have lasting impact on their emotions. At this stage, it’s important to give your puppy lots of comfortable, positive experiences. This can include meeting new people, interacting with other animals, and experiencing different environments.

Month three is also the time to enrol them in puppy school, where they’ll gain confidence and socialise with other pups. Puppy classes also strengthen the bond between you and your puppy as you work together with positive reinforcement.

Around 16-20 weeks of age, your puppy’s brain is around 80% developed. By this point, they’ll have a pretty distinct personality. You’ll know if your dog is adventurous, timid, bossy, quiet, etc. But just because they have a fixed personality doesn’t mean their emotions and behaviours are set in stone! In fact, this is a crucial stage of your puppy’s emotional development.

By now, your puppy will be bonded to you. But as they approach adolescence, they’re gaining independence, curiosity, and confidence. They may start to wander further away from you at the park, exploring the world beyond their closest human bond. At this point, continue training with your puppy, and keep introducing them to new dogs and places. The more you socialise and bond with your dog at this stage, the more emotionally healthy they’ll be as they enter adolescence.

During their early adolescent months,your puppy’s emotional development is at a critical point as they gain confidence and decide what (and who) to trust. As physical growth and hormonal surges collide, they start to test boundaries. They’re finding their place in the hierarchy of the home.

In addition, at this stage, puppies go through a second fear period. They may react defensively to other dogs and people, or become protective or territorial. During this fear period, continue socialising your dog. Avoid potentially traumatic experiences, and stick to positive reinforcement training throughout their development.

As your puppy continues developing during their “teenage” months, you can support their emotional development with plenty of exercise and training time. Think of it as “setting them up for success.” And remember to keep your sense of humour! Your four-legged teenager may try your patience, but they’re on their way to becoming emotionally mature.

Months 11-12 (and Beyond): Becoming Emotionally Mature

When they tell you “there will be ???? BUT you have to wait for it” #iwantcakenow #formepleasecake

Somewhere around one to one and a half years of age, your dog will reach emotional maturity. Small dogs get there sooner; it can take a bit longer for bigger dogs. At this point, your pup has the emotional capacity of a two to three year old human child. That means they’re capable of feeling joy, fear, anger, and love.

Of course, just because your dog has completed their emotional development doesn’t mean you should stop nurturing their feelings! As humans, we’re pretty good at tending to our dogs’ physical needs. But their emotional needs are just as important. By providing consistent attention, socialisation, and positive associations, you can keep your dog emotionally healthy for years to come.