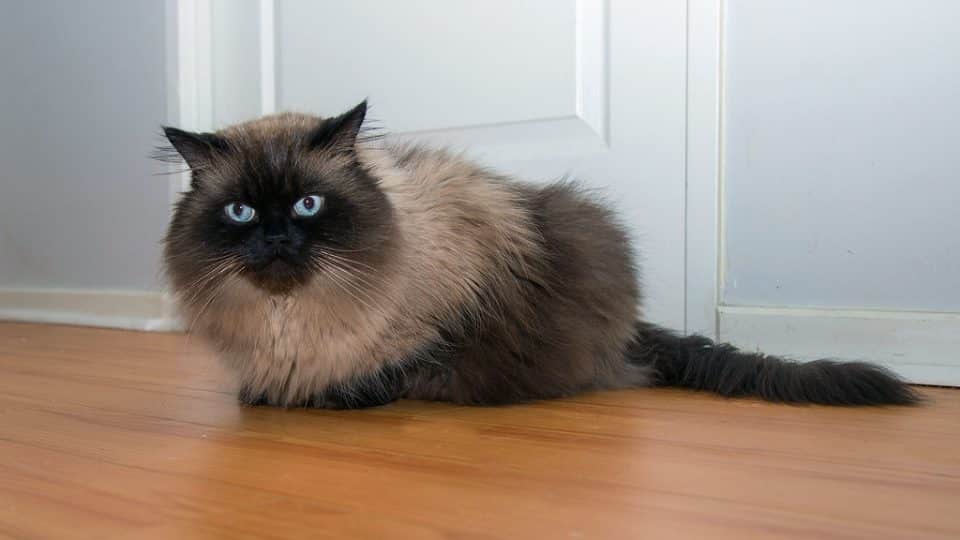 The Himalayan cat is a hugely popular breed, and for good reason. They’re calm, cuddly, and adaptable kitties.

You probably know the Himalayan cat—or “Himmie,” as they’re affectionately called—for its striking good looks. But these cats are more than just a pretty face, as any Himalayan enthusiast will tell you.

Want to learn more? Let’s get to know the lovely and charming Himalayan cat.

1. The origin of their name isn’t what you think

First, let’s clear up a common misconception: the Himalayan cat is not from the Himalayas, nor are they named after the Asian mountain range.

This long-haired breed earned its name from the Himalayan rabbit to which it bears a striking resemblance. Both animals have similar colour points, with dark markings around their faces and feet.

2. Himalayans are a hybrid breed 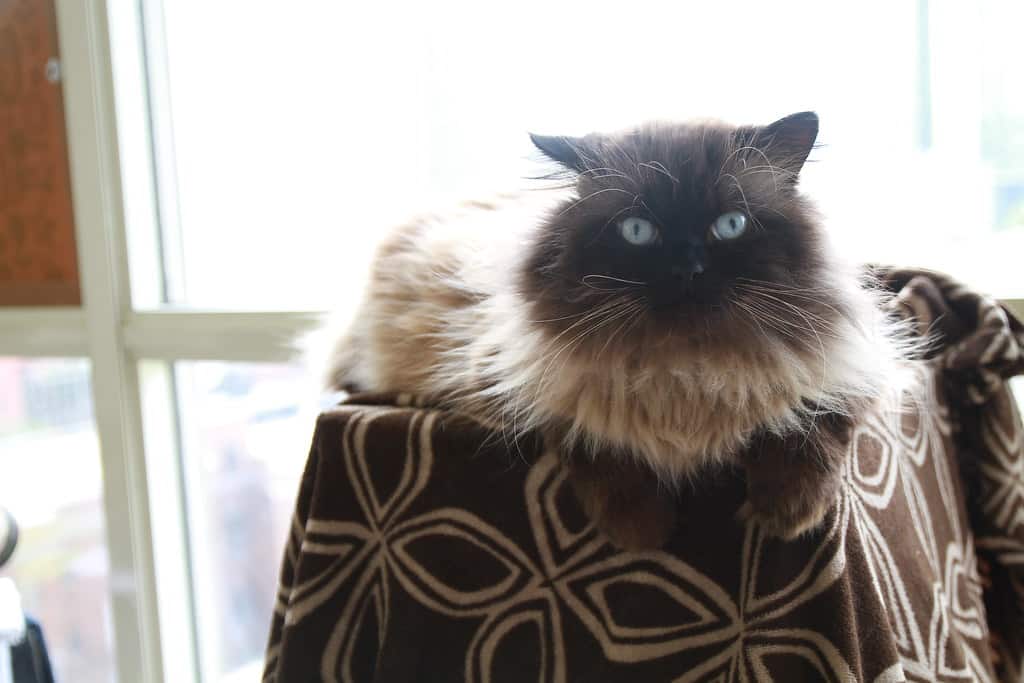 The Himalayan’s story began in the 1920s and ’30s when breeders attempted to create a cat with the physique of a Persian and the colour markings of a Siamese.

It wasn’t until 1957, though, that American breeder Margaret Goforth named the breed the Himalayan. The Himalayan cat was officially recognised by the Cat Fanciers’ Association the same year.

3. Some just call them Persians 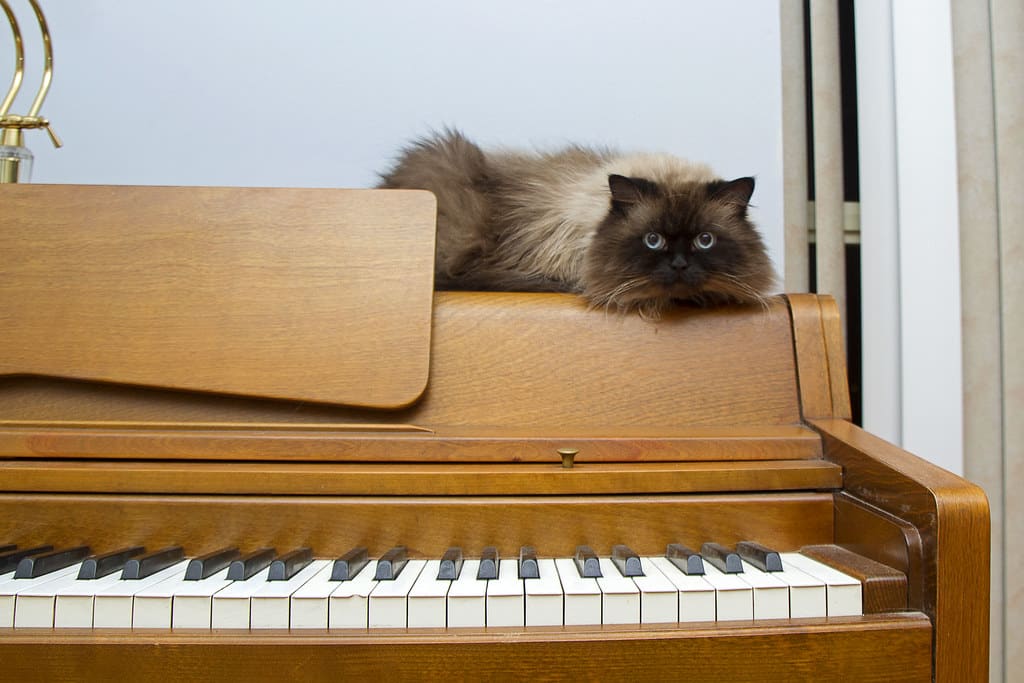 So how do we categorise these glamorous felines? Are they a breed in their own right, or are they simply a sub-breed of the Persian cat?

Well, that depends on who you ask.

There are registries that consider the Himalayan a distinct breed, while others, such as the Cat Fanciers’ Association, categorise them as a variety of the Persian. 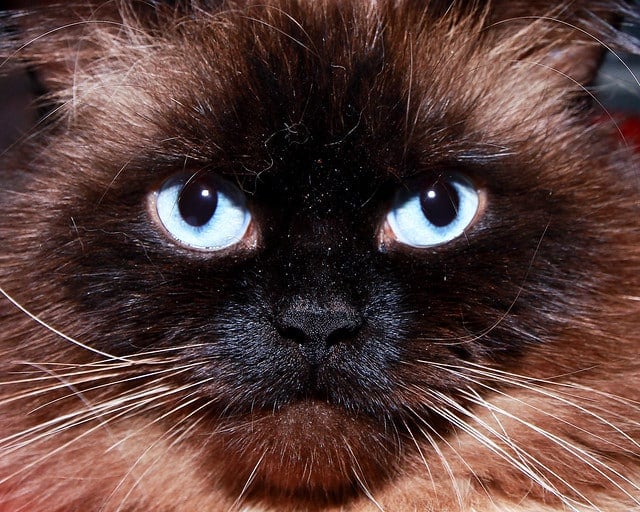 It’s no surprise that this breathtaking breed has appeared on the big screen more than once.

Perhaps you recall the memorable Mr. Jinx from Meet the Parents. And who could forget the sarcastic Sassy from the 1999 production of Homeward Bound: The Incredible Journey? The film crew reportedly employed at least ten talented kitties to play the role of Sassy.

5. Himalayans have a winning personality

Unlike their Siamese ancestors, Himalayans are on the quieter side. While not inactive kitties, they prefer the cosiness of a friendly lap to the rambunctious hijinks that their feline comrades might enjoy.

While the Himalayan cat may have inherited their calm, breezy vibes from their Persian ancestry, they still have that Siamese blood in them. Which means they’re a friendly, affectionate breed who can become extremely attached to their owners. 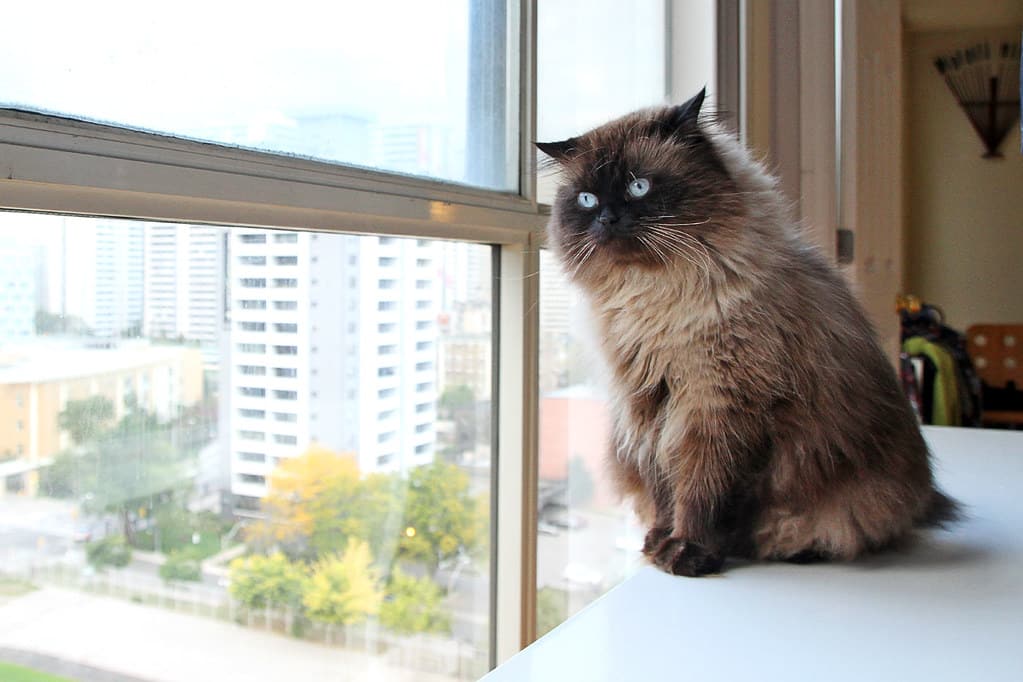 Himalayans are brachycephalics—meaning they have shortened pug-like muzzles. But even though we find them charming, their “smooshed-in” faces make this breed highly sensitive to heat. Unfortunately, their shortened muzzles can contribute to respiratory problems, which is something to consider if you’re thinking of bringing one of these kitties into your home. Make sure to keep them cool when the mercury rises!

7. They can’t skip their beauty regimen 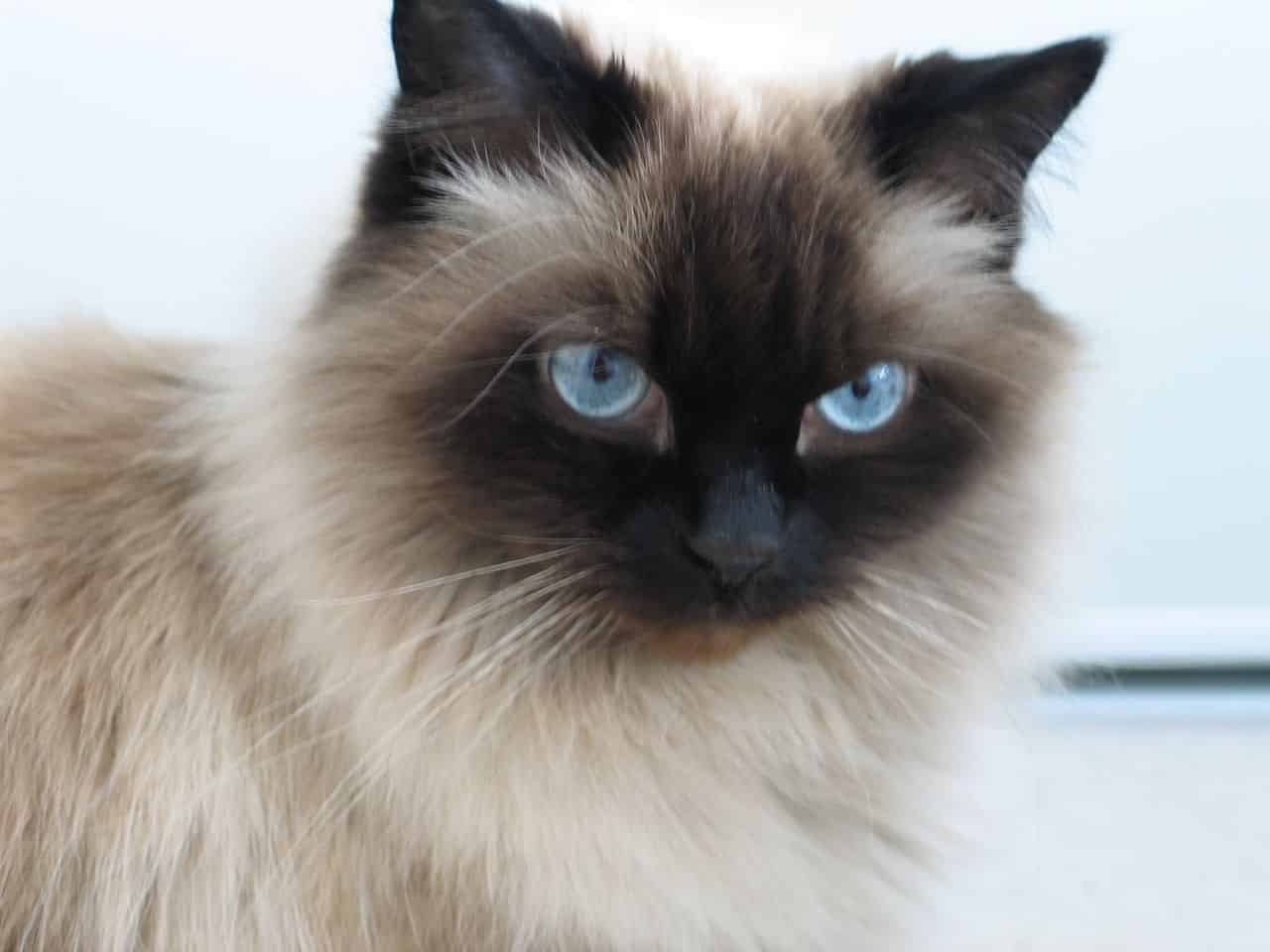 Looks this good don’t come easy, so Himmy owners should be prepared to brush up (pun entirely intended) on their grooming game. Unless you want a matted mess that requires a less-than-flattering buzzcut, your Himalayan needs to be brushed daily.

But they’re gorgeous. So it’s totally worth the extra work. 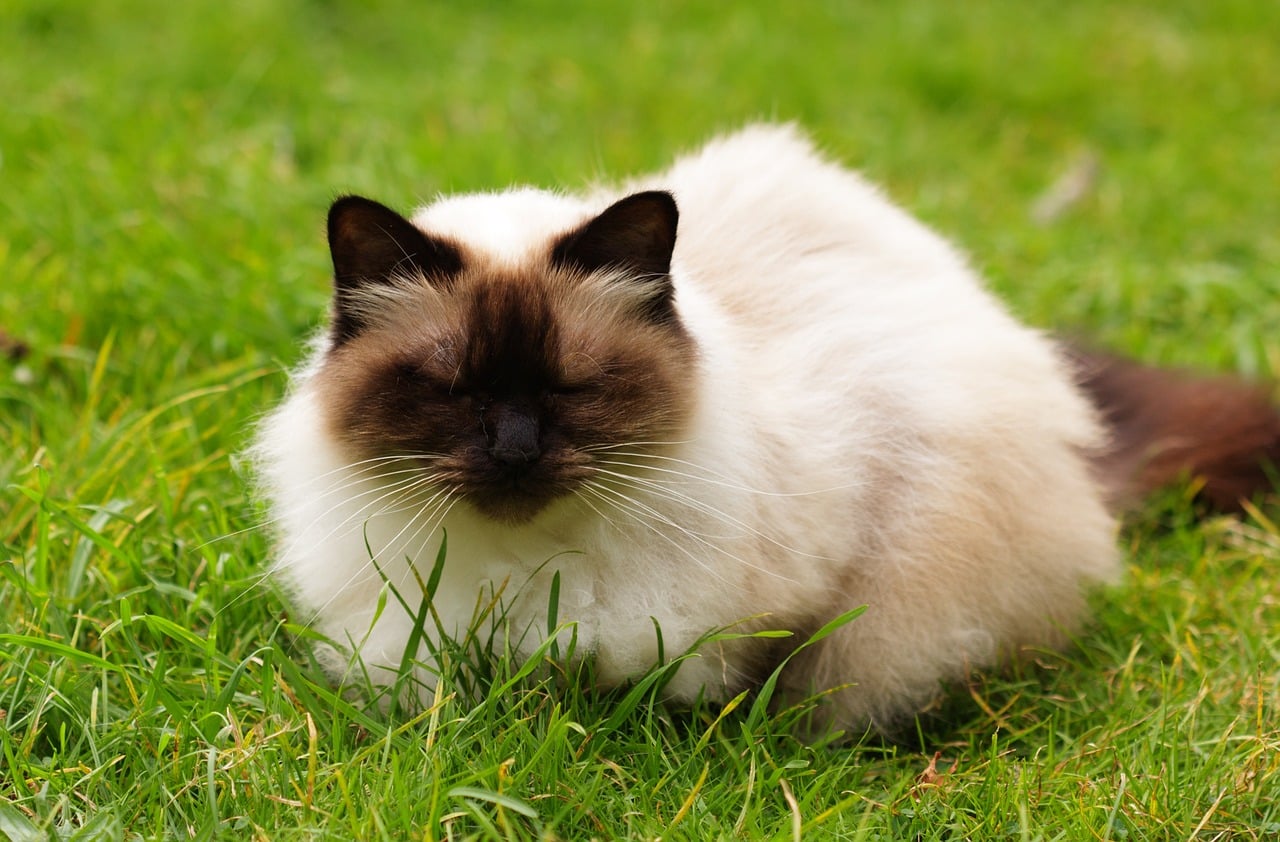 Himalayan kittens aren’t born with their distinct colour points. As they mature, they’ll begin to develop their signature markings.

But did you know— a Himalayan’s surrounding temperature plays a role in the development of his darker markings?

Himmies, and other similar Asian cat breeds, are born with gene modifiers that inhibit colour pigmentation. These genes are affected by temperature. This is why a Himalayan’s warmer body parts are white (its torso and neck), while its cooler extremities (tail, paws, face) are dark.

9. These cats are not jumpers 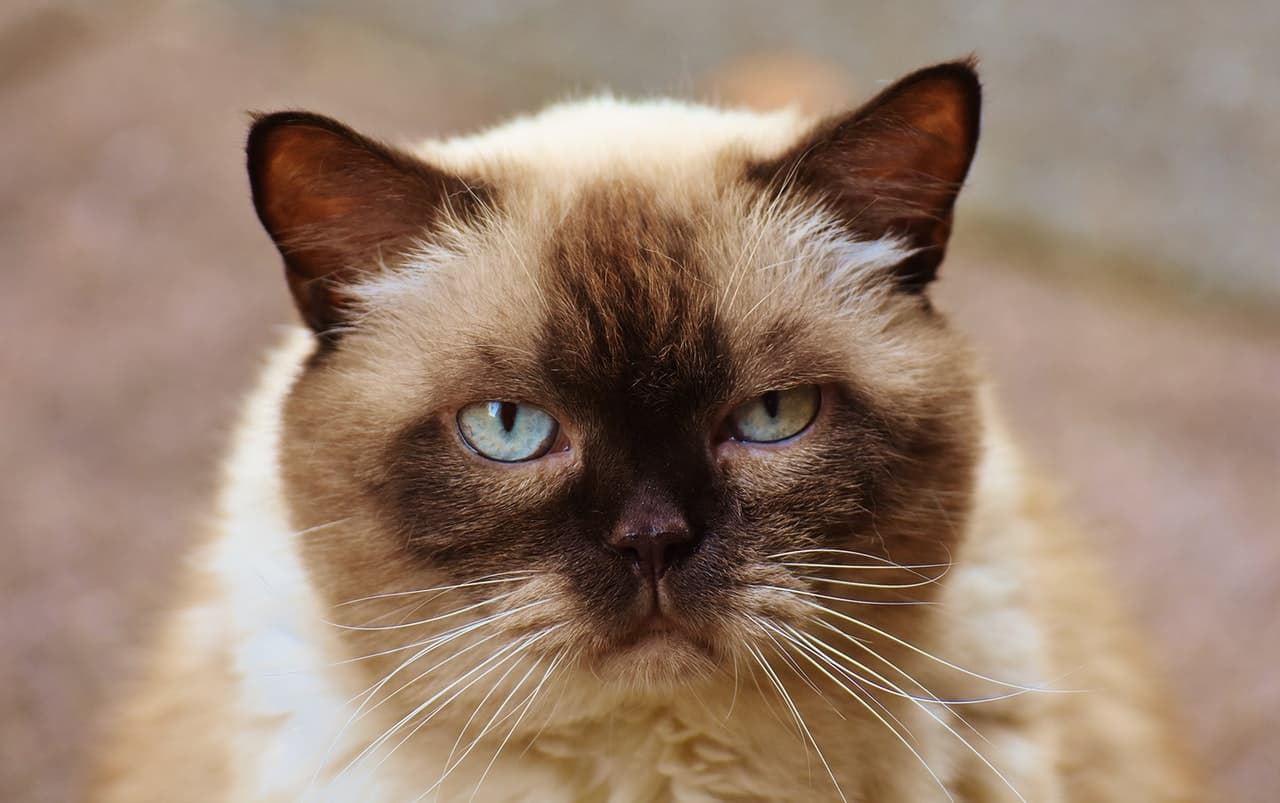 The Himalayan’s short stubby legs make it difficult for them to jump very high. They’re not as interested in climbing or exploring high places like other cat breeds, such as the lanky Savannah cat.

This may be a welcome fact to people looking for a more placid kitty who’s less likely to run all over their home.

Are you completely smitten yet? With their beautiful markings and pleasant personality, it’s no wonder the Himmie is such a hit with pet owners. Whether you’re already a fan of the breed or you’re considering adding one to your family, we have to admit—it’s hard not to fall in love with this charming feline.