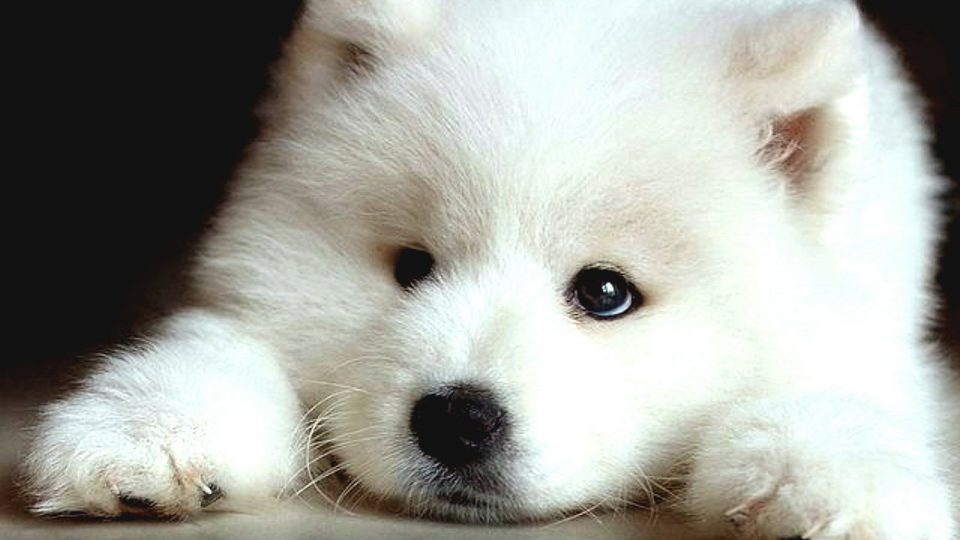 You may love seeing closeups of polar bears on David Attenborough documentaries, but having one in your home as a pet is definitely not recommended. No one said you can’t have a dog that looks like a polar bear, though!

If you’re hankering for an Arctic-looking dog or just want to see some cute pictures, we’ve got you covered with seven dogs that look remarkably like little polar bears.

Get ready for the fluff. 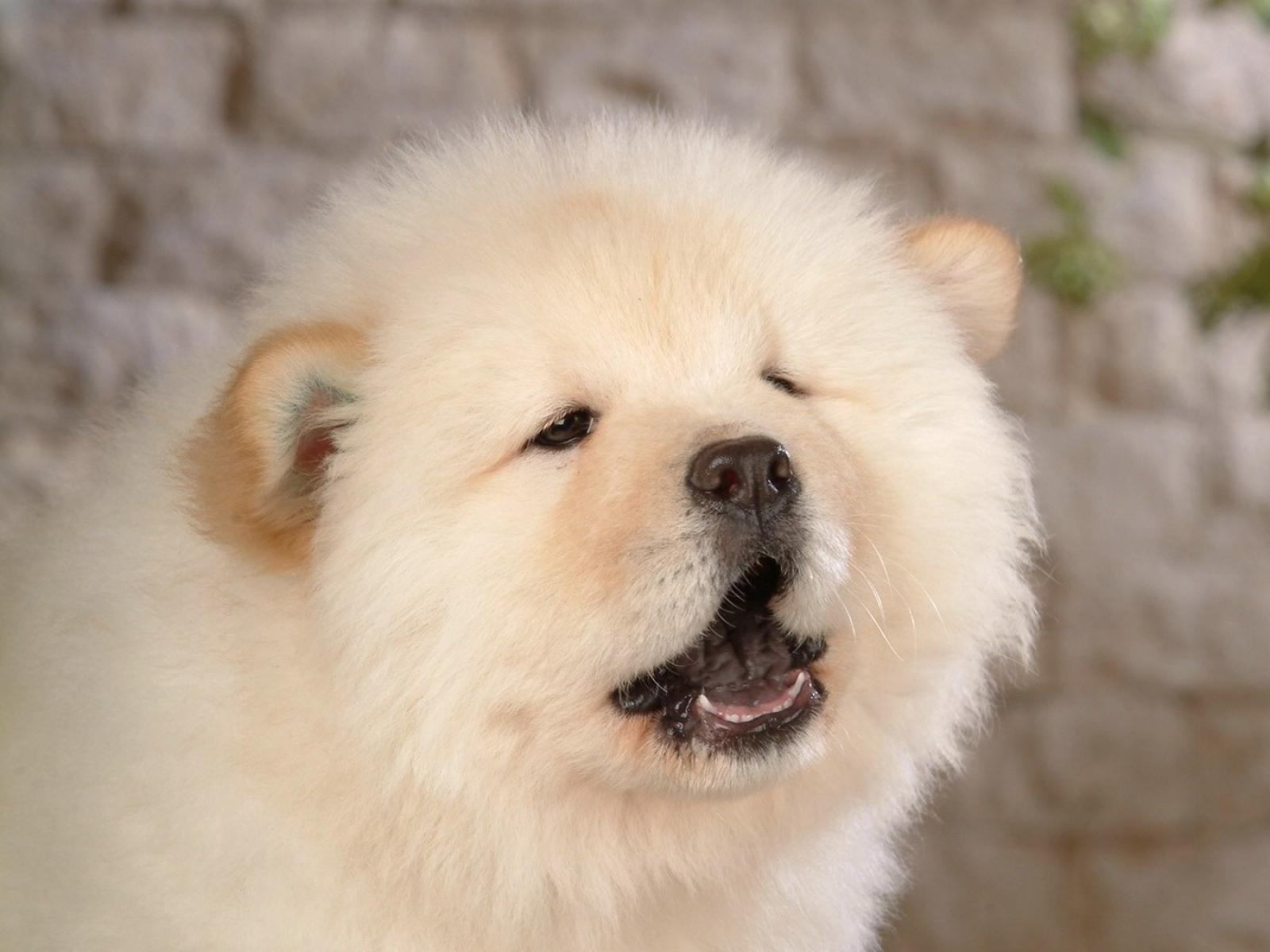 The chow chow is an ancient and majestic breed from China, known for its distinctive purple tongue and huge bushy ruff or mane. Today, chow chows are content to be house pets who need relatively little exercise, but in days of yore, they were temple guardians, hunters, and haulers.

Chows can have several coat colours including red, black, and cinnamon, but cream-coloured chow chows with their fluffy fur and round faces have a particularly polar bear-like appearance. Their voluminous double coats require twice-weekly brushing and a monthly bath, but otherwise, chow chows are fastidious self-groomers.

Though they’re known to be standoffish with strangers, chow chows are loyal and loving to their families. 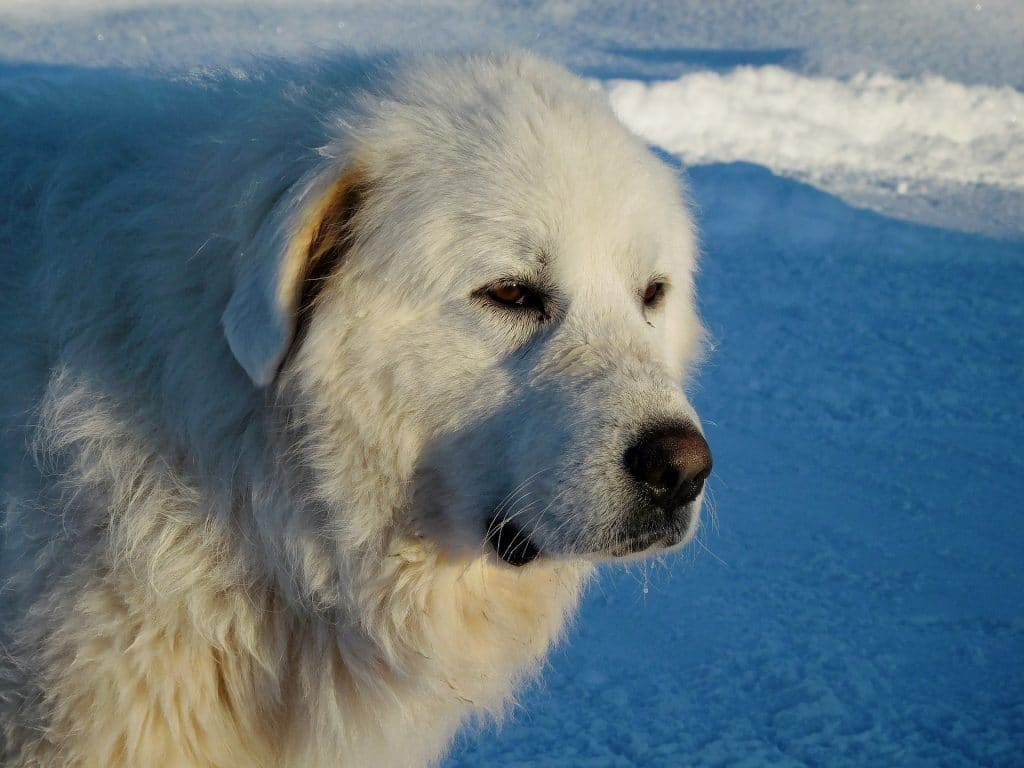 Great Pyrenees were bred as herding dogs and protectors of the flock in the Pyrenees mountains that border France and Spain. These dogs are known for their Zen-like patience—perhaps a remnant of their past life standing guard atop cold mountain tops. They’re now primarily family dogs who can love on their people but spring into protection mode whenever necessary.

With a thick, white double coat that kept them warm and helped them blend into the snowy mountains in their early days, Great Pyrenees might make you think you just saw a teenage polar bear.

Surprisingly, Pyrs don’t require a lot of grooming because their coats are dirt- and tangle-resistant. However, they will shed their undercoat in the spring, so owners should prepare for that fur blizzard with a slicker brush. 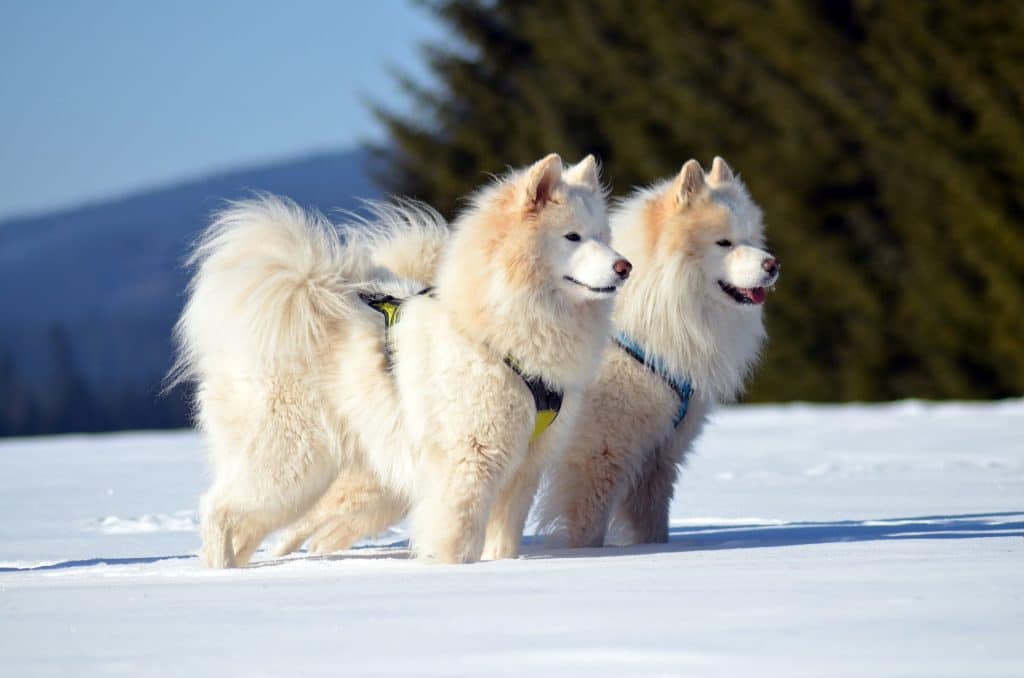 Samoyeds are an ancient spitz breed hailing from northern Russia. Traditionally, these all-white dogs were used to herd reindeer and pull sleds for the nomadic indigenous peoples of the region.

Samoyeds are noted for their family-friendly demeanour and luxurious fur, which has been compared to angora in softness and warmth.

Samoyeds are pack animals by nature, so they look for an alpha to lay down the law. With consistent, firm training that emphasises positive reinforcement, Samoyeds are known to be delightful pets who thrive off of interaction with a devoted owner. Since they were bred to be working dogs, they’ll be on their best behaviour if they get plenty of mental and physical exercise. 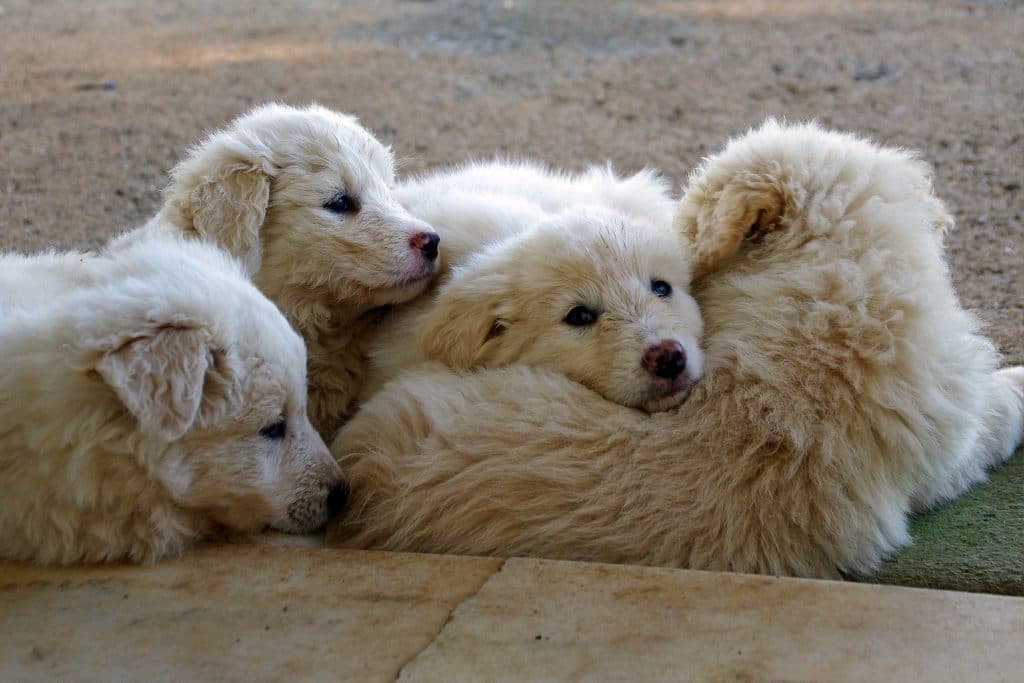 The Maremma sheepdog gets its name from the region in Italy where it was bred to herd and protect sheep. The primary predator for flocks in Maremma was and continues to be wolves, so you can bet this sheepdog is both strong and brave. Their dense white coats help them blend in with the sheep and give them a polar bear-esque look.

Though they’re said to be deeply devoted to the people they bond with, this breed is not recommend as a family pet because of its deep history as a working dog. Maremma sheepdogs “need a job to do,” they say, so they won’t be as happy or fulfilled with a purely domestic life. 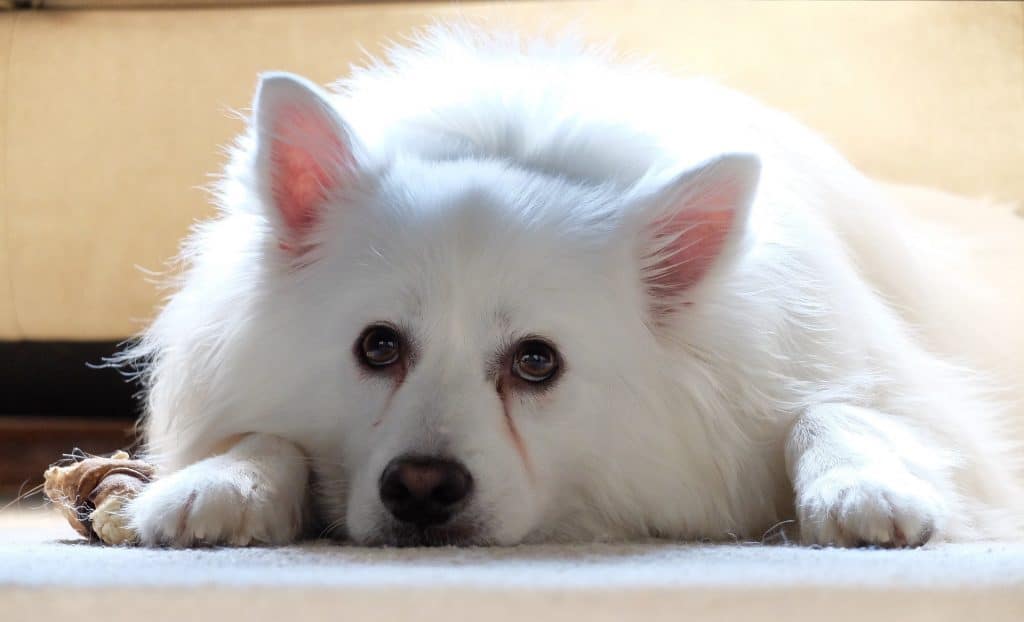 Originally known as the German spitz, the American Eskimo Dog was renamed in the United States during WWI due to prejudice against all things German and despite Eskimos having nothing to do with their history.

The Eskie’s beauty, intelligence, athleticism led it to fame as a circus and performance animal in the first half of the 20th century.

Since they were bred as herding dogs, Eskies do best with active owners who will keep them engaged mentally and physically. They’re naturally social animals who love being part of a family. With a striking white double coat resembling that of a polar bear, they need to be brushed two to three times per week as they shed almost constantly. 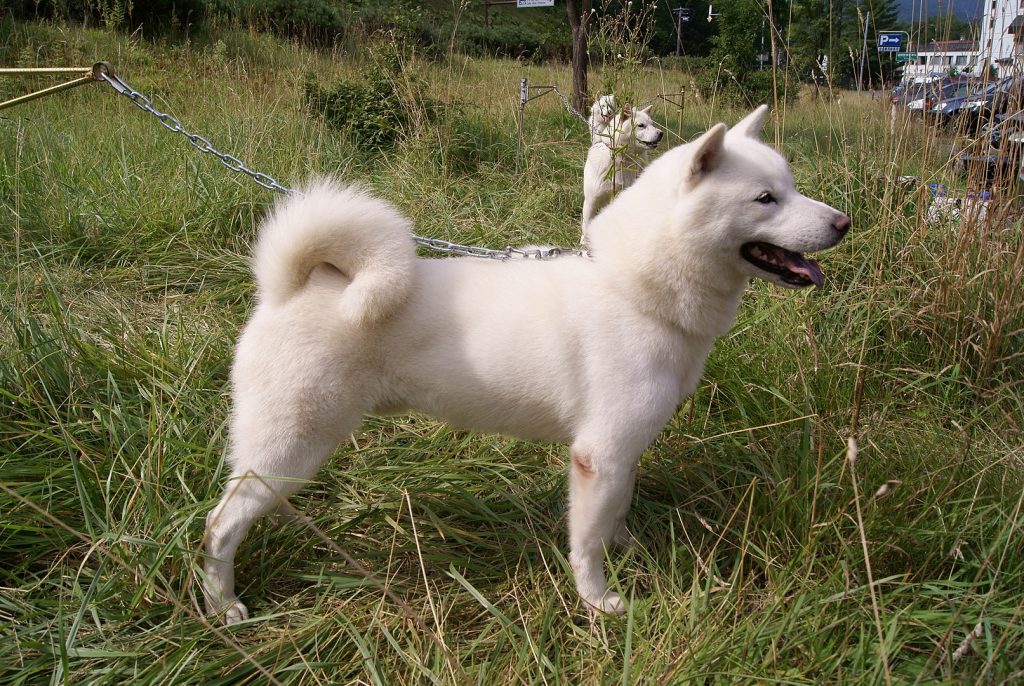 Originally from Japan, the Hokkaido dog breed is quite rare outside its home country. They’re one of the oldest of the Japanese spitz breeds and were cherished by the Ainu people centuries ago for their loyalty, courage, and hunting abilities. They developed thick double coats to survive cold winters alongside their hunting human companions.

With early training and socialisation, Hokkaido dogs are said to be devoted, well-behaved family dogs. However, a Hokkaido dog left to their own devices may be aggressive toward strangers and act out inappropriately.

They will shed that gorgeous white coat twice yearly, but otherwise, they just need weekly brushing to keep them looking like a prim little polar bear. 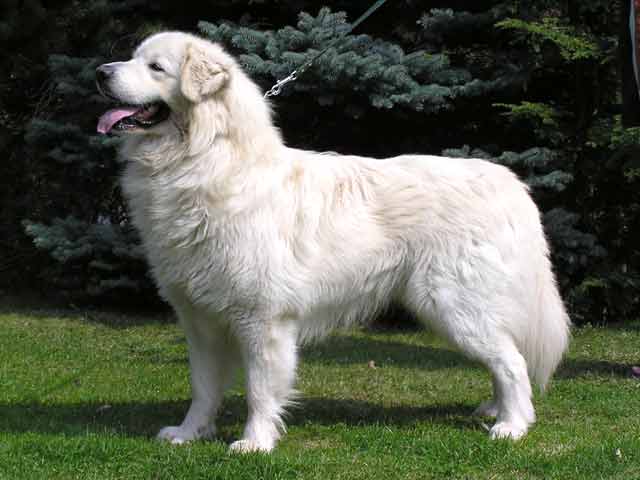 Another herding dog from the European mountains, the Slovensky cuvac breed can be traced back to Arctic wolves. A professor at Brno Veterinary College in Bratislava established official breeding standards for cuvacs in the early 1900s—since then, owners have been showing their dogs through the Club for Tatra Chuvach in Slovakia.

As a working dog, cuvacs do best on farms where they have a job to do and a big family (or flock) to look after. They’re known to be alert and fearless, so they’re excellent guard dogs.

With that polar bear-like coat, cuvacs need weekly brushing and monthly baths to keep them looking their best.

These polar bear dogs can make your dreams of living and snuggling with a polar bear (almost) come true.

But in all seriousness, real polar bear numbers are dwindling from the dramatic loss of sea ice—their natural habitat. As animal lovers, let’s help protect the polar bear’s precious environment.

And remember, if you have to be away from your fluffball for whatever reason, you can always find a loving dog sitter who’ll be happy to dole out cuddles on Rover.com. 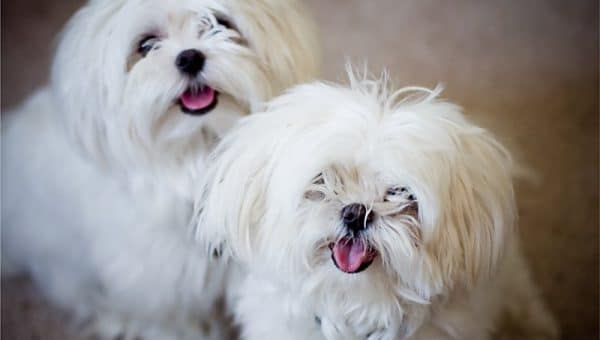 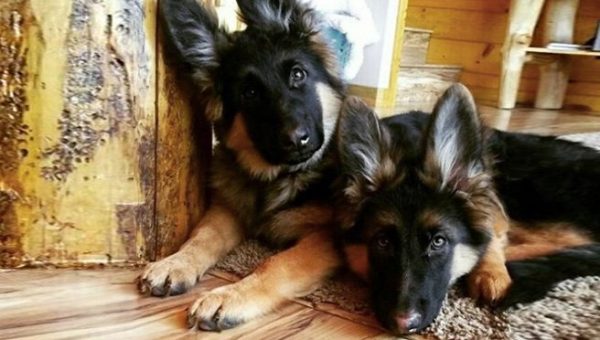