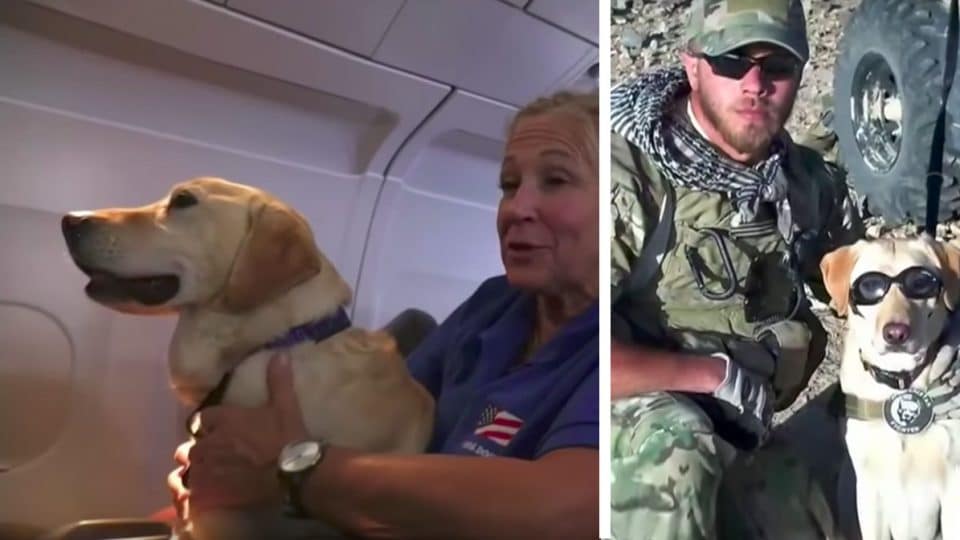 Being away from your partner for two years feels like forever. But, when Sgt. Tom Hanson was finally reunited with his military dog Taylor, it was worth the wait.

They served their country side-by-side, Hanson keeping ‘Tay Tay’ safe during gun battles, Taylor keeping Hanson and his fellow soldiers aware of land mine threats at their feet. Hanson wasn’t sure if he’d ever see Taylor again after they were each discharged.

Adopting a retired military dog can be difficult and very expensive, even for former handlers. That’s where United flight attendant Molli Oliver and her non-profit Mums Dogs steps in to make the sweetest reunion happen.

Taylor spent her entire life serving in the military, including two tours in Afghanistan. And because of her impressive ability to save American soldiers’ lives, she had an actual bounty on her head with the Taliban.  Thankfully this amazing dog was never caught by the bad guys and was eventually sent back to the US to retire.

When Molli Oliver isn’t flying for work, she works her passion: reuniting soldiers with their service dogs. Through her non-profit, Mumsdogs.org, Molli works to bring soldiers and their retired dogs together, one dog at a time. Her love of the dogs and her deep appreciation of the men and women who protect her freedom drives her to do this important work.

When Molli heard Hanson and Taylor’s story, she knew she had to help, and she did!

Oliver flew out to meet Taylor at the military kennel and then personally escorted the good dog to Boise, Idaho, where Hanson was anxiously waiting.

Such a sweet reunion! Princess TT made it to Boise. Thank you @bfit2fly #firstclassdog @united pic.twitter.com/H2aTW8XA8n

Tears flowed when Taylor got off the plane and ran into Hanson’s arms, and we were crying those happy tears along with them.

The bond between Hanson and Taylor is unbreakable and stood the test of time.

Have a great life Sgt. Hanson and Taylor. And thank you both for your service.

And a huge thanks to Molli Oliver and her big heart for helping these teams reunite for a peaceful retirement together.