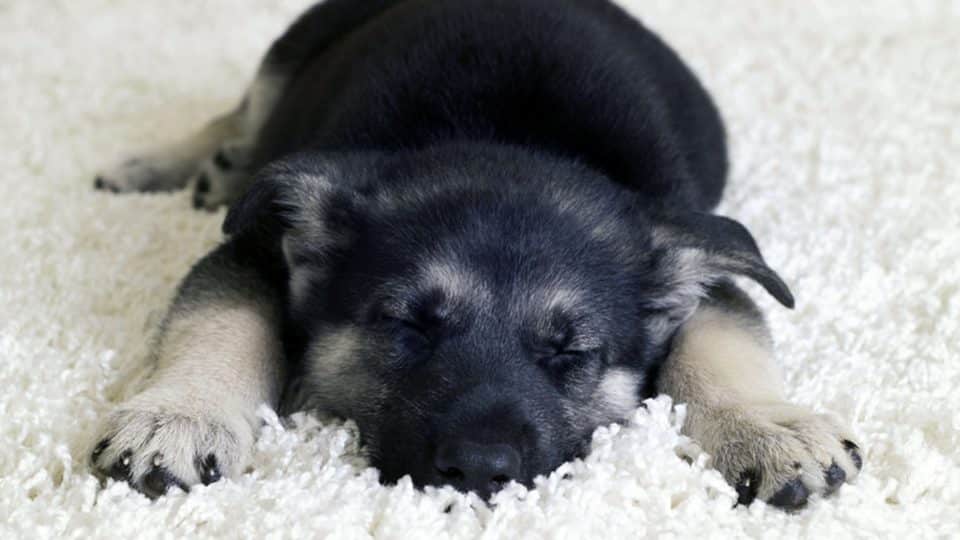 So, you adopted a puppy. Congratulations! You’re in for a whirlwind few months of joy, excitement and love.

Unfortunately, like any new parent, you’re also in for some challenging nights while your puppy learns how to be alone and sleep through the night.

From the day your new pup comes home—whether she’s eight weeks or four months old—it’s up to you to set her up for successful nights. Mistakes in the beginning can haunt you for weeks to come. Luckily, our tips can help keep you on the right path!

Even if your puppy is not allowed on walks yet because he hasn’t been fully vaccinated, it’s super important to provide him with both mental and physical stimulation inside the home and, if you’re lucky enough to have one, in an enclosed garden.

Play with toys, chase each other around and work on training games. Outside, you can begin getting your puppy comfortable with a lead and walk them in laps around the property. Feed your dog from puzzle toys (instead of from a dog bowl) to engage their brains while they eat.

Take your puppy out for a toilet break right before bedtime

Due to their development, puppies are typically unable to hold in their urine for more than a few hours at a time. If they have the opportunity to do their business right before bedtime, you’ll have more time to rest before they need to pee again.

When bedtime rolls around, make your home feel comfy and cosy. Dim the lights, put on some soft classical music, and give your puppy a soft nest to snuggle up in. Try including an item of your clothing in their bedding so your pup feels close to you.

Dog Appeasing Pheromone (DAP) collars and diffusers release a calming pheromone (a synthetic version of the hormone released by a nursing mother dog) that can also help to soothe your puppy.

Decide where your puppy will sleep, and stick to it!

Choose your puppy’s overnight bed in advance. That way when they start whining and giving you the sad eyes, you’ll be less tempted to allow your pup to sleep with you.

If you let your puppy sleep with you in the beginning, you’re more likely to have a dog that sleeps with you all their life. There’s nothing wrong with sleeping with your dog, as long as you’re the one making the choice!

A crate or confinement space is better in the beginning

Until your puppy has grown enough to be able to hold in their urine through the night, allowing them to sleep in your bed is likely to end in soggy sheets. If you don’t want to wake up in a wet spot, have your puppy spend the night in a crate or area blocked off by a baby gate with a soft nest of bedding.

If you’re using a confinement space, you can put a pee pad next to puppy’s bed so they can go in the middle of the night without waking you.

If your puppy sleeps in a crate, you’ll have to do a middle-of-the-night pee break

Puppies simply cannot hold their urine for more than a few hours—physically, their bodies aren’t made for it. They also don’t like to be forced to sit or sleep in their own mess and we don’t blame them. These two things together mean that, if you’ve started crate training your puppy and want to crate him overnight, you’ll probably have to get up in the middle of the night to let him out.

Unless you have a tiny breed, a good rule of thumb is that a pup can hold their bladder for about as many hours as they are months old (i.e., a three-month-old pup can hold it about three hours, a four-month-old about four hours). Just like children, they may be able to hold it a little longer overnight if they’re exhausted, but they’re still unlikely to make it all the way until morning.

When you take your pup for a toilet break, stay calm and quiet and don’t engage in any play or excessive snuggles.

One of the things a puppy can learn the fastest is that whining and barking brings you running. If they know that all they have to do is make some noise to get your attention, you’re never going to get a good night’s rest.

The first few days your pup is home, try ear plugs, white noise and other noise-cancelling options to block out whining and barking. In some cases, confining your dog in your bedroom may help to quiet your dog because they know that you are there.

“Sleeping through the night” may mean waking up at 6 a.m.

Just like any new baby, when your puppy is small and learning how to sleep through the night, she’s  likely to be rejuvenated and full of energy first thing in the morning. Waking up early to take your puppy for a pee break and give her some attention is a normal part of pet parenthood.

If you’d like to extend your sleep, try confining the little bundle of joy in a larger space instead of a crate so she can pee without waking you. If that doesn’t work, see if your puppy is willing to let you sleep a little longer after a toilet break if she gets to join the snuggles.