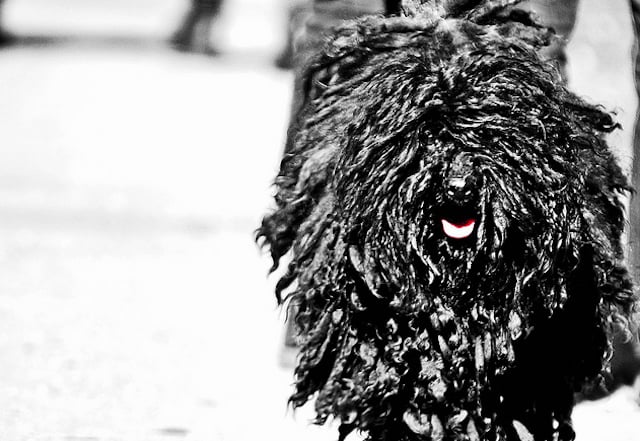 No, that’s not a walking mop with a tongue—it’s a lovable achievement in fur-engineering!

A mere handful of dog breeds are graced with vivacious dreadlocks. Some come by it naturally—like the Komondor, puli, and Bergamesco. Others—the poodle, Spanish water dog, and Havanese—can only achieve this look with a little help from their human friends. But whether it’s functional or aesthetic, this coif is certainly eye-catching. And before we go any further, we must stress that the proper terms for dog dreadlocks are cords, flocks, and mats. 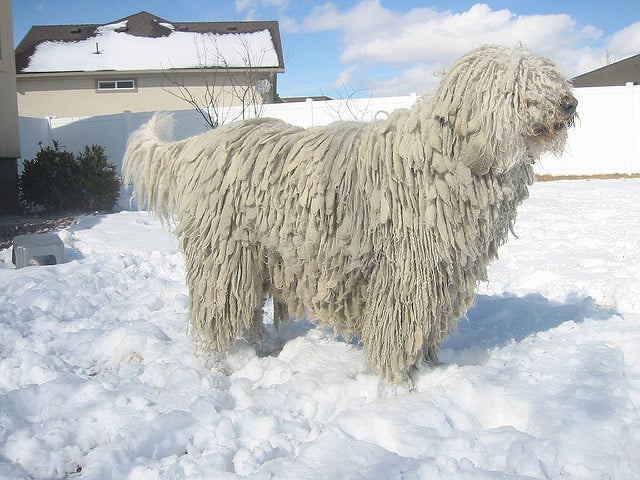 This herd-watching phenom is (officially!) a national treasure in Hungary, where the breed earned its keep for centuries guarding sheep and cattle. The Komondor’s name means “dog of the Cumans,” referring to the tribe of people who brought the dogs to Hungary in the 12th and 13th centuries. The dogs’ white coat helps them blend in with their herds and the wintery landscape. During the puppy phase, the coat is soft and wavy. But as the dog matures, the outer coat grows coarse, trapping the softer undercoat to form cords, which protect from predators and provide warmth. 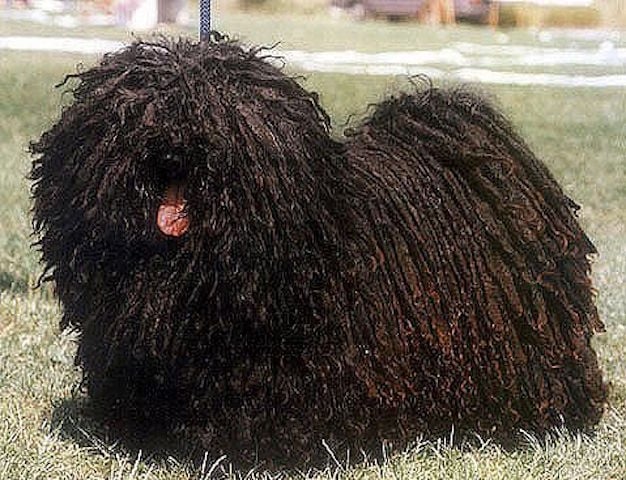 A close cousin of the Komondor, the puli sports thinner cords that also form naturally when the outer and inner coat become intertwined. The Puli is native to Hungary as well and prized for their herding ability. (Many shepherds have paid a full year’s salary for their work dogs.) Pulis were often paired with Komondors to guard a herd—the Komondors kept watch at night while Pulis stood guard during the day. Their white, grey, or cream-coloured cords provide warmth and protection, but their coats require maintenance to prevent painful matting. 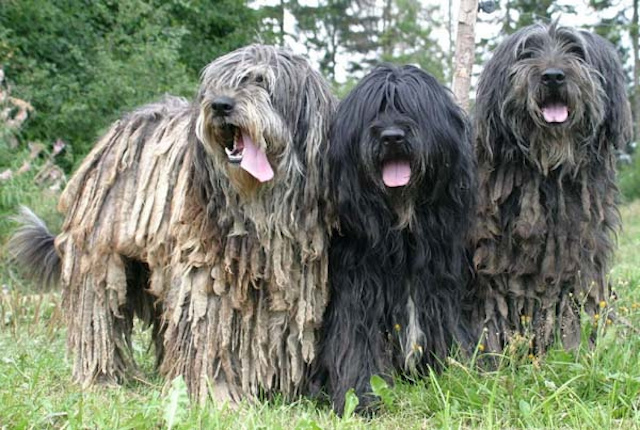 The Bergamesco is an ancient breed whose 2,000-year history stretches from the Middle East through Asia to the European Alps. Their independent, sociable, intelligent nature makes them perfect for herding. And just as they’re accustomed to protecting their flocks of sheep, their “flocks” of hair keep them warm in the extreme mountain winters and protect against predators. The long hair over their eyes functions as a protective visor to prevent sunburn on bright winter days surrounded by reflective snow. 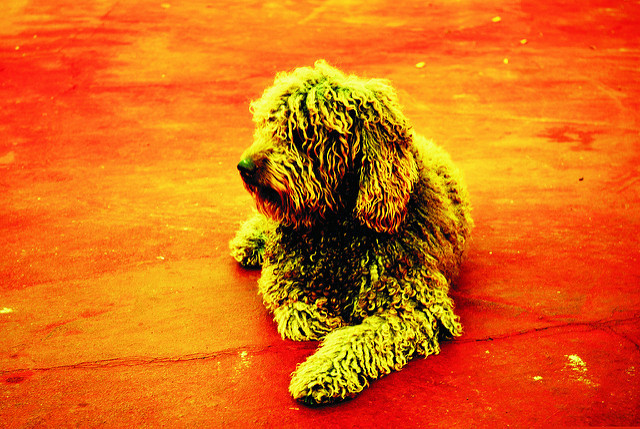 This good-looking, rustic breed from the Iberian Peninsula isn’t naturally “corded,” but still sports substantial locks of hair. Spanish Water Dogs are vigilant watchers, and they aim to please. Hunters, herders, and fisherman have long relied on them as loyal sidekicks. Their curly locks are perfectly adapted to their native humid climate, but in order to get a corded look, an owner must shave down the coat, then let it grow out, and shape the cords along the way. 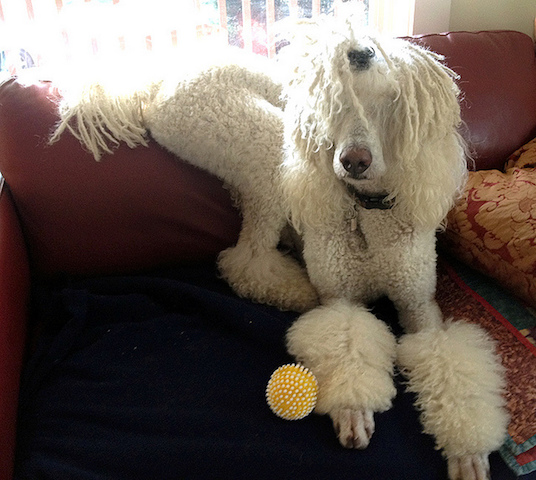 This easily recognisable breed is known for its versatile coat and elegant comportment. Cords don’t come naturally to a poodle, but a meticulous and attentive owner can alter the coat and create thin cords like those worn by the stylish lady pictured here. The coat must first be clipped and never brushed. When cords form, they must be separated again and again. Shampooing is out of the question—you must soak the corded pet in warm water and then squeeze the cords dry. Like milking a cow—wow! 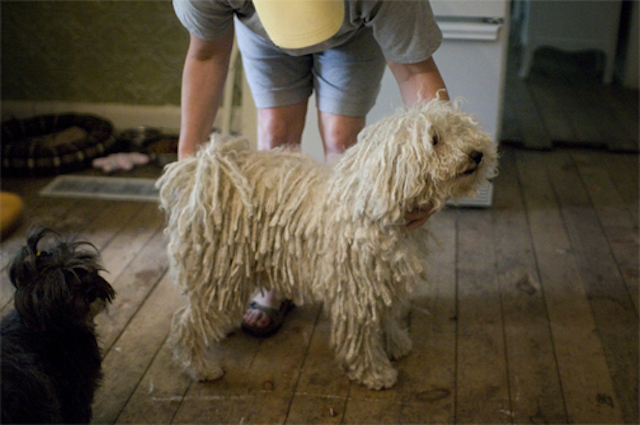 The Havanese were bred as companion dogs for the Cuban aristocracy in the 1800s. They’re sometimes called “velcro dogs” because they’re so deeply attached to their owners. The Havanese are known to be funny, outgoing, and playful, and they’ve worked as both circus performers and assistant dogs. This breed looks fantastic with cords, but getting there takes serious maintenance. Owners must form sections of hair that need repeated checking to keep mats from forming, and the entire process can take as long as two years!

Whether they’re wearing organic or curated cords, a dreadlocked dog deserves nothing but admiration. Because the hairdo either helped the breed thrive through centuries of hard work, or the head-turning canine’s got a hard-working groomer on his side. However you slice it, big hair deserves big props. Tell your friends about Rover.com if they need more dog facts and memes in their lives, or if they’re just after an amazing sitter who offers dog boarding!

Cecily Sailer runs creative writing programs for the Austin Public Library Friends Foundation in Texas, USA. She is also the proud dog mom of two hounds, Henry and Mabel, though Wony the Pug was her first dog love. 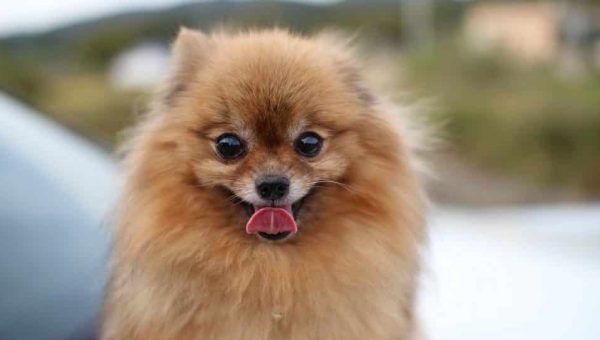 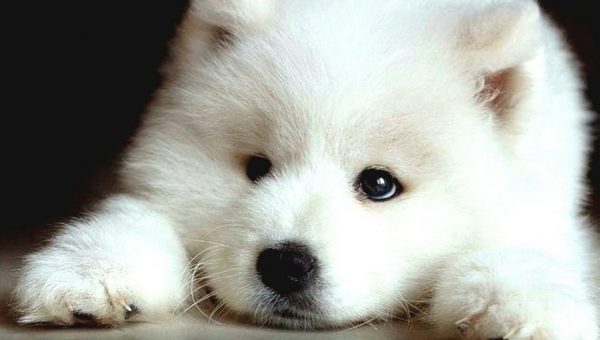 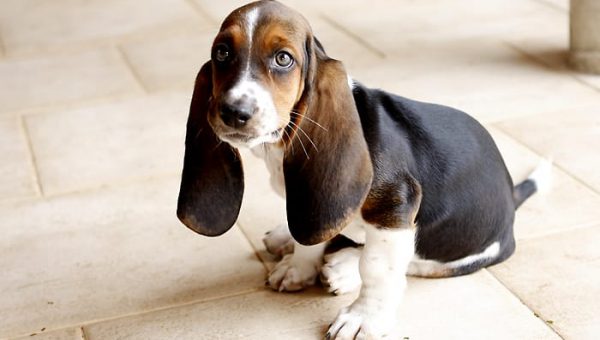