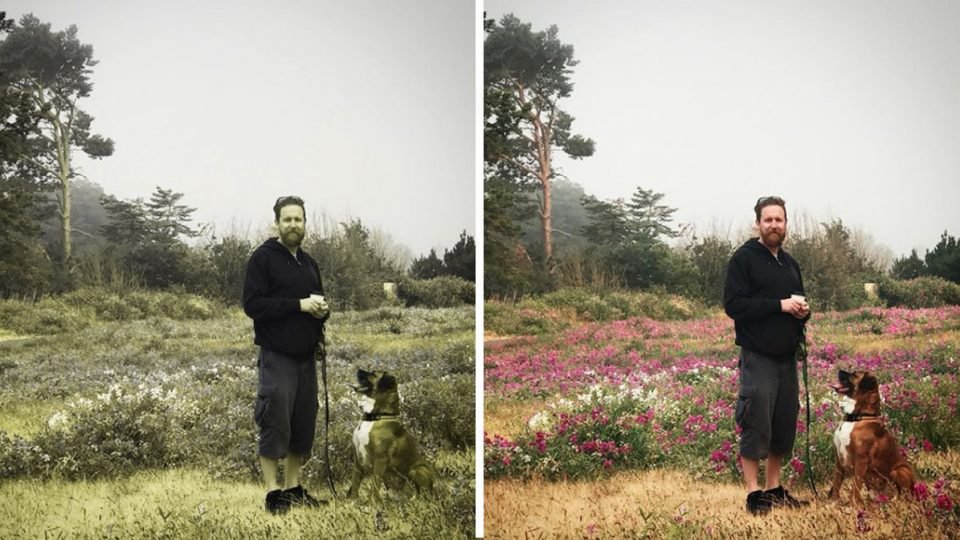 Can dogs see in colour? In short, yes! And are dogs colour blind? Well, it’s complicated. Dogs do see in colour, but unlike their human companions, dogs don’t see the rainbow and every shade of ROYGBIV in between.

A dog’s eyes can process only two colours: blue and yellow. And varying shades of grey, of course. While we used to believe that dogs only saw in black and white, we now know that that’s not the case. But why? We’re answering some of your most-asked questions about dog eyesight, from whether dogs have night vision to if they have the visual acuity to read.

Do Dogs See Only Black and White?

Negative. This is a common myth, but dogs have much more colour perception than just black and white. Dog eyesight captures blue, yellow, any combination of the two, and shades of grey.

So yes, dogs have colour vision, but no, they don’t see the same thing we see with our human eyes, or birds, who have colour receptors into the ultraviolet spectrum. Dogs are colour blind in some of the same ways that humans are, though the colours they see (or can’t see) are different than those of colour-blind humans.

Human beings have three types of cones in our eyes, each one containing cells sensitive to its own colour: red, green, and blue. This is called trichromatic. Dogs, on the other hand, only have two kinds of receptors: blue and yellow.

This means that canine vision is closest to what human colour-blindness (red-green colour-blindness ) looks like. This is called dichromatic. So next time you’re wondering why your dog can’t seem to find that red KONG in the green grass, cut him some slack. It’s not that dogs don’t see all the different colours, so much as the colour range is compressed into just the blue and green part of the spectrum. Check out the example below: 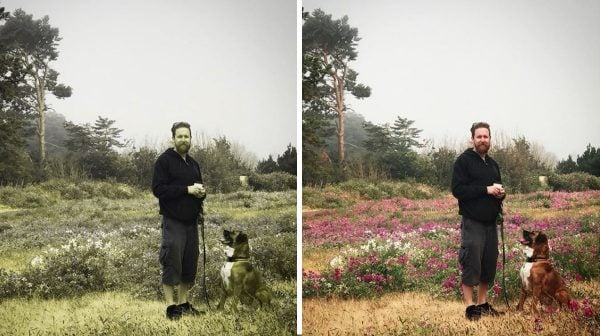 Evolution, that’s why. Dogs are built for hunting and seeking out prey. That’s why their eyes have high sensitivity to motion at a distance—a whopping 10 to 20 times greater than humans. Their hunting background also means that their vision is suited for the hours just before sunrise and after sunset. Not only that, but dogs have a wider peripheral vision than humans.

What’s not important to dogs, however, is rummaging around for brightly-coloured fruits and berries. Over time, their eyes adjusted to best fit their needs. Dogs are colour blind because they don’t need to see all the colours that we do, in short.

It’s also worth noting that dogs rely more heavily on other senses, like smell. Thanks to the heavy lifting done by their extra-sensitive snout, dogs don’t just don’t need advanced colour perception—they can smell most of what they need to know.

Why Do Dogs Have a Wider Peripheral Vision?

Chalk this one up to eyeball placement! Because dogs’ eyes live on either side of their heads, they can see an impressive 250 degrees. This is 60 degrees wider than their human friends, who max out at 190 degrees.

Of course, there’s a range somewhere in the middle—a Labrador, for instance, has a much different facial structure than a pug.

The pro to having close-set, front-facing eyes? The central field of vision where both eyes intersect, which helps with details and depth perception. Where humans have a large amount of this binocular vision, dogs do not.

Can Dogs See in the Dark?

If we’re comparing dog night vision to human night vision, then yes. Even though they have fewer cones than we do (remember, that’s why dogs are colour blind), dogs have more rods, which help with the skills above: high sensitivity to motion and great vision during dawn and dusk.

Dogs also have large pupils, which, kind of like blinds, let in more light. Finally, because dogs are nocturnal by nature, they have a reflective membrane at the back of their eye called the tapetum lucid. This membrane acts like a mirror, bouncing extra light to the retina for bonus seeing power.

Ever walked your dog at night or caught a glimpse of him in the dark? That is the sparkle you’re seeing.

How Accurate is a Dog’s Eyesight?

A Look Inside Our Office: At your annual eye exam, the Optometrist will use an eye chart to measure your Visual Acuity, which is the sharpness of vision, measured by the ability to discern letters or numbers at a given distance according to a fixed standard. The test is based on what a person with normal vision can read or identify at a distance of 20 feet. . . . #SachemEyeCare #VisualAcuity #SnellenChart #eyechart #20/20 #eyeexam #eyes #glasses #myope #hyperope

Well, not very. We’ve all seen the Snellen eye chart. If a human’s comfortable seeing 20/20, dogs are down at the 20/75 range. That means anything below the third line is a blur.

Even without the finer details, however, dogs are still getting a basic, big-picture idea of the object or scene in front of them.

We’re full of cool facts here at Rover.com  but we also have plenty of dog walkers and sitters who offer dog boarding in your area so get ready to meet your dog’s new friend! 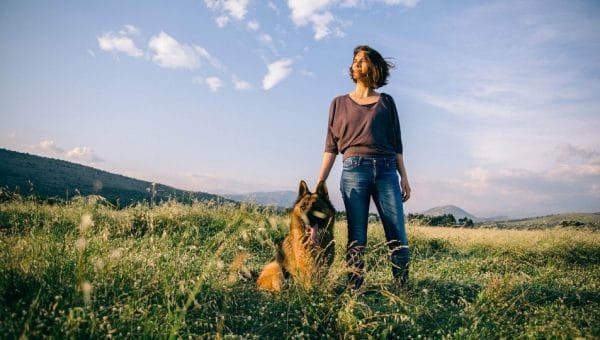