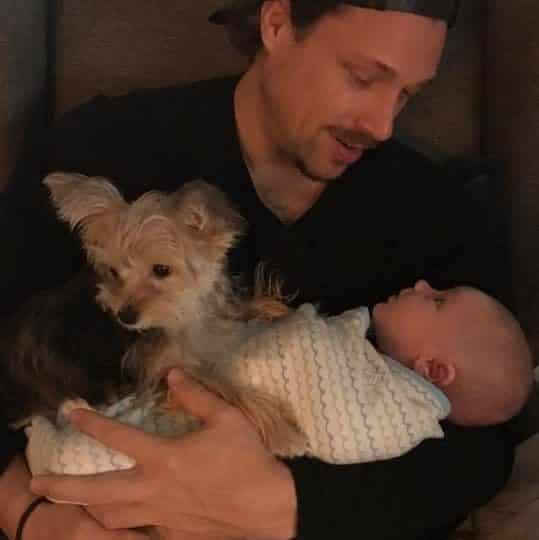 Vanessa Rae and her husband, Sean Goldstein, found their perfect rescue pup—right before their baby was born. Now they’re raising the two together in a whirlwind journey they didn’t quite expect but wouldn’t trade for the world.

Getting to the point of adopting a dog together didn’t come easy. After Rae’s family’s dog, Suki, passed away, she didn’t feel ready for a new pet. “When Suki died, I was just so upset,” Rae said. “It was years before I considered having another dog.” 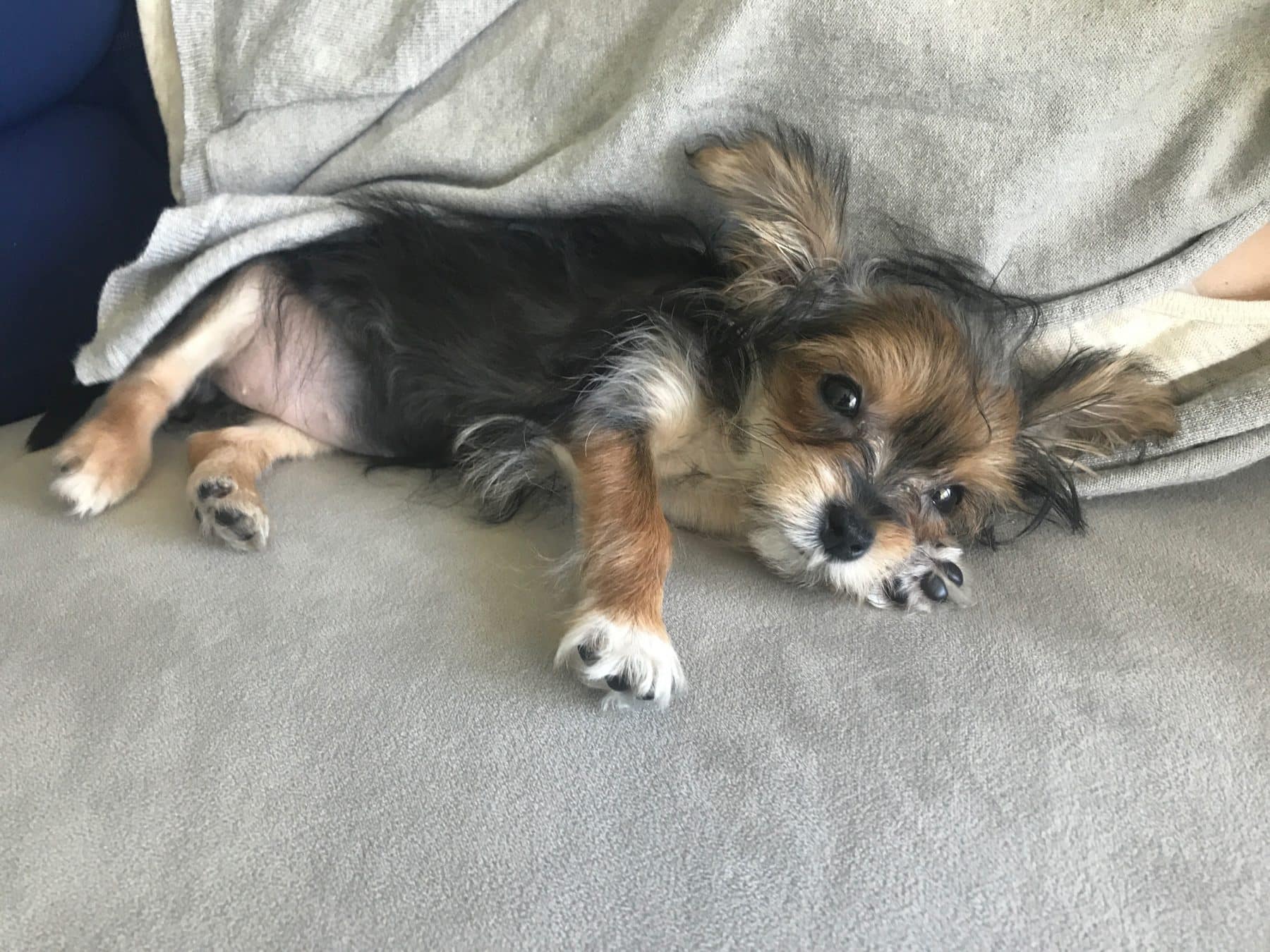 The couple wanted to adopt a rescue dog. They also wanted to ensure any dog they adopted was a good fit for their lifestyle, and due to their travel schedule, looked for a smaller dog who could travel with them. They searched hard, sent emails, and went through application processes. 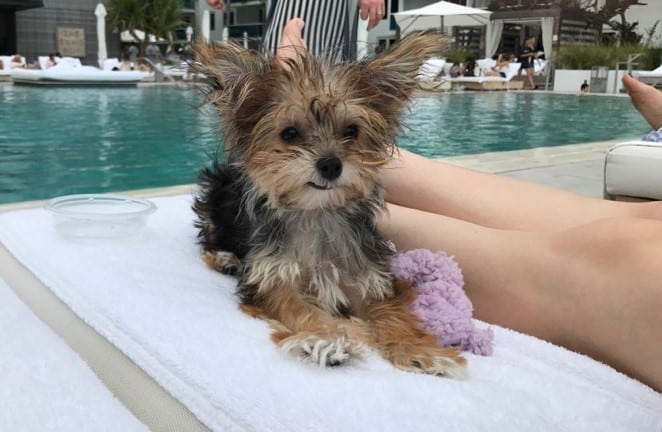 “Sean’s mom does a lot of great work with rescue dogs so we were aware of puppy mills and how many dogs were waiting for homes whether in rescues or shelters or at the pound,” Rae said. “I don’t think people really realize how many dogs are out there needing homes. We were willing to wait for the right dog. It’s a long process and it’s an animal who will be part of your family and in your life for a long time.”

Then Rae got pregnant; the sense of urgency increased. Just before Thanksgiving 2017, Rae and Goldstein were scheduled to meet an adoptable dog but were told the dog had kennel cough and had to recuperate.

However, the rescue had two other small dogs, one considered a “mouse puppy” because she was so tiny. They made the drive out to meet both. And although they didn’t expect to adopt such a young dog, they gravitated toward nearly four month-old “mouse puppy.” 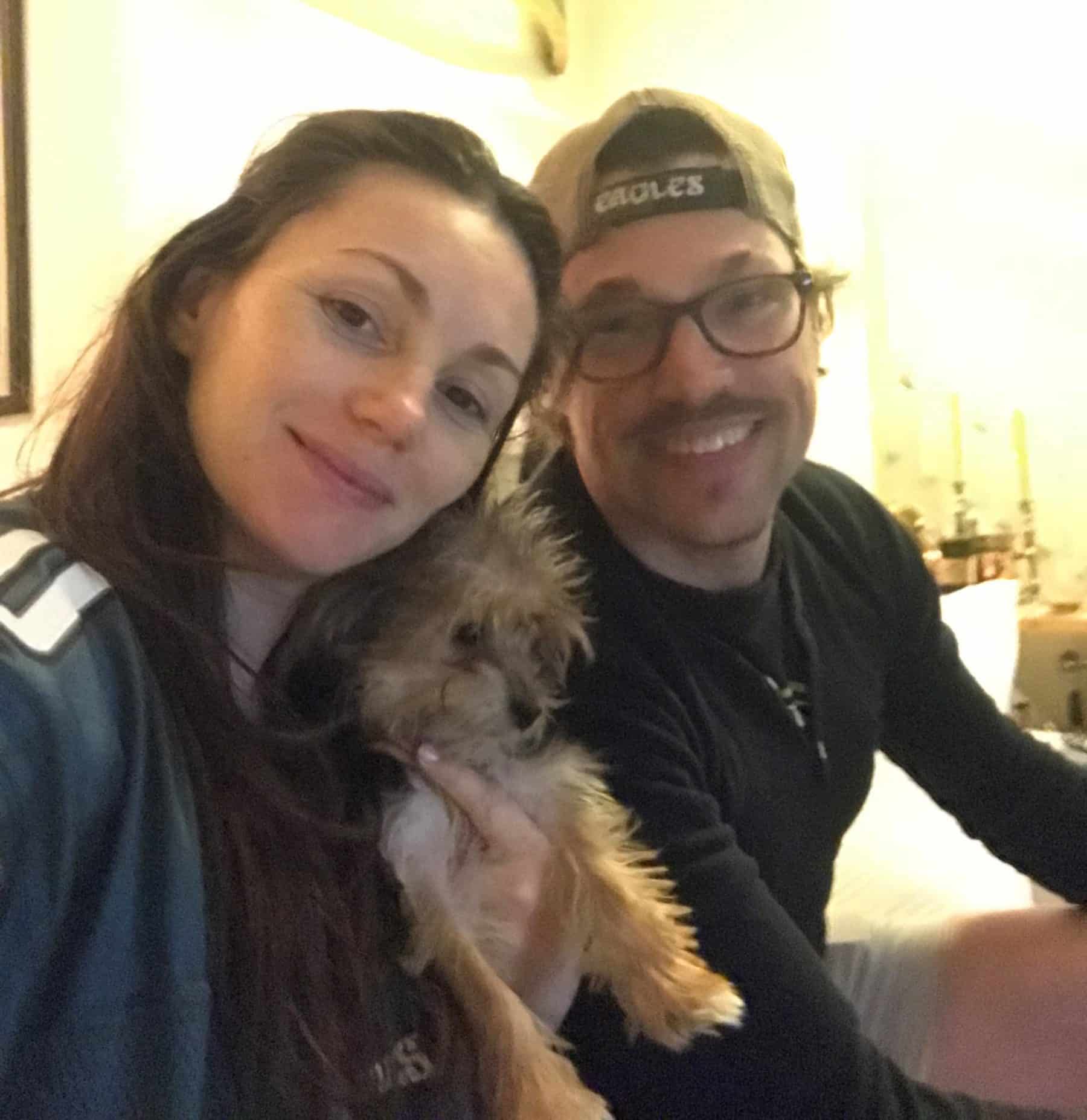 The dog, a Yorkie mix they named Evie, came from a puppy mill, had a long skinny tail and big ears, and weighed two pounds. “I thought, ‘Is this dog too small?’” Goldstein said. “But she cuddled right up to us. She was amazing, so teeny and unique. She also looks kind of like a gremlin or an Ewok.”

They finalized the adoption and drove home with the dog snuggled up to them. Back home, she quickly showed a spunky side. “She suddenly had this huge personality,” Goldstein said.

This spunky energy led to her full name: Evie Bronco Golightly. “She was running all over the place bronco-ing around and kicking her feet up,” Rae said. “It was funny and she was a big-time zoomer.”

When Duke was born in April 2018, they had Evie sniff Duke’s hat before they met so she could anticipate and be familiar with the baby’s scent.

“One of the many methods we learned was positive reinforcement, by letting Evie smell the hat and then giving her treats,” Goldstein said.

When Evie actually met Duke, she was very excited, running around and sniffing and kissing him. “She never really wanted to stop doing that,” Goldstein said. “We had to curb her enthusiasm to love on him.” Evie may have felt a tinge of jealousy when Duke first came along, but it was just a matter of days before she knew she found her best friend. 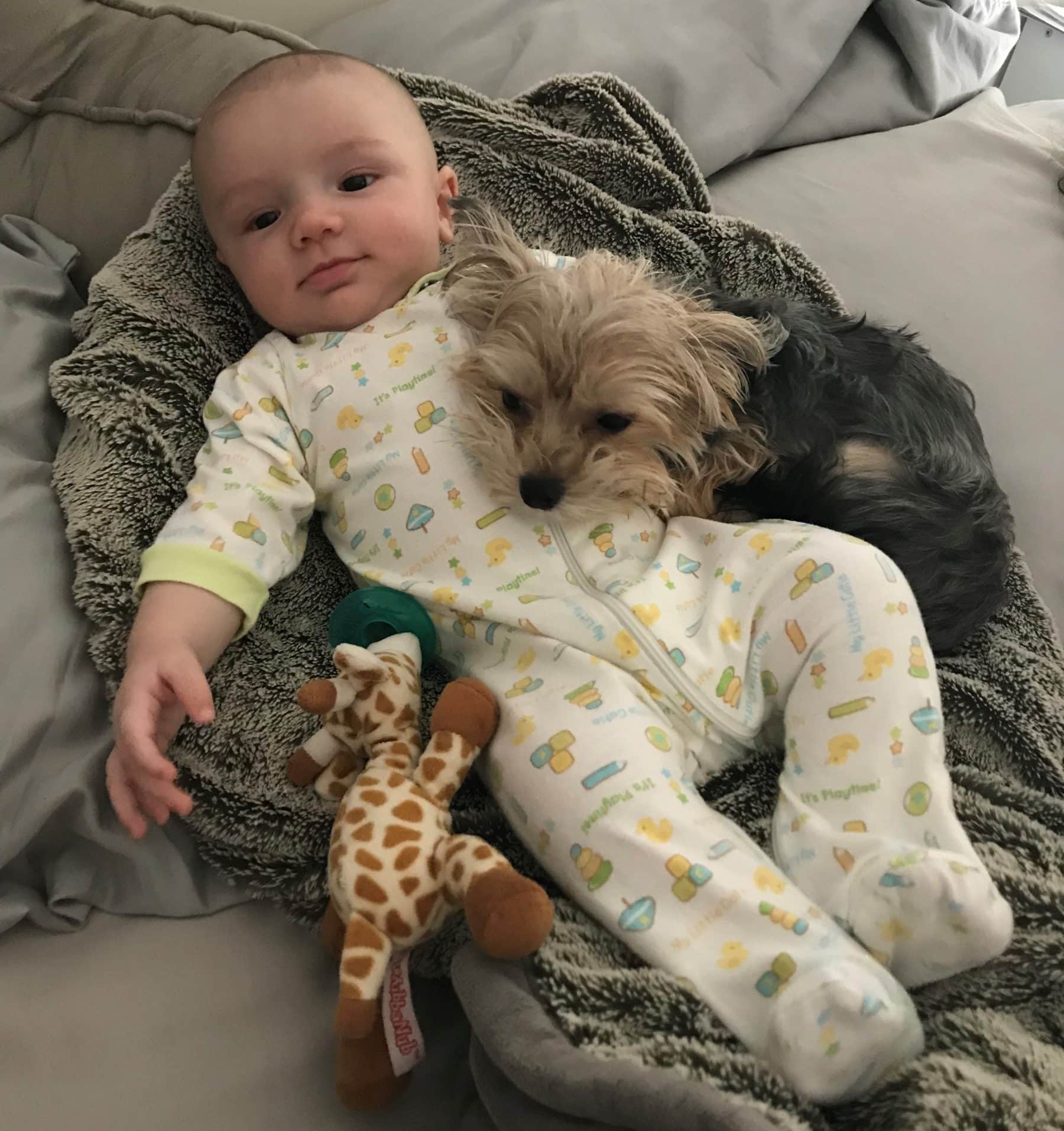 Now that Duke is a bit older, he laughs when Evie plays with and kisses him. “I can see the joy in his face when she’s around,” Rae said. While Dada and Mom were his first words, “Evie was the third thing he said.” 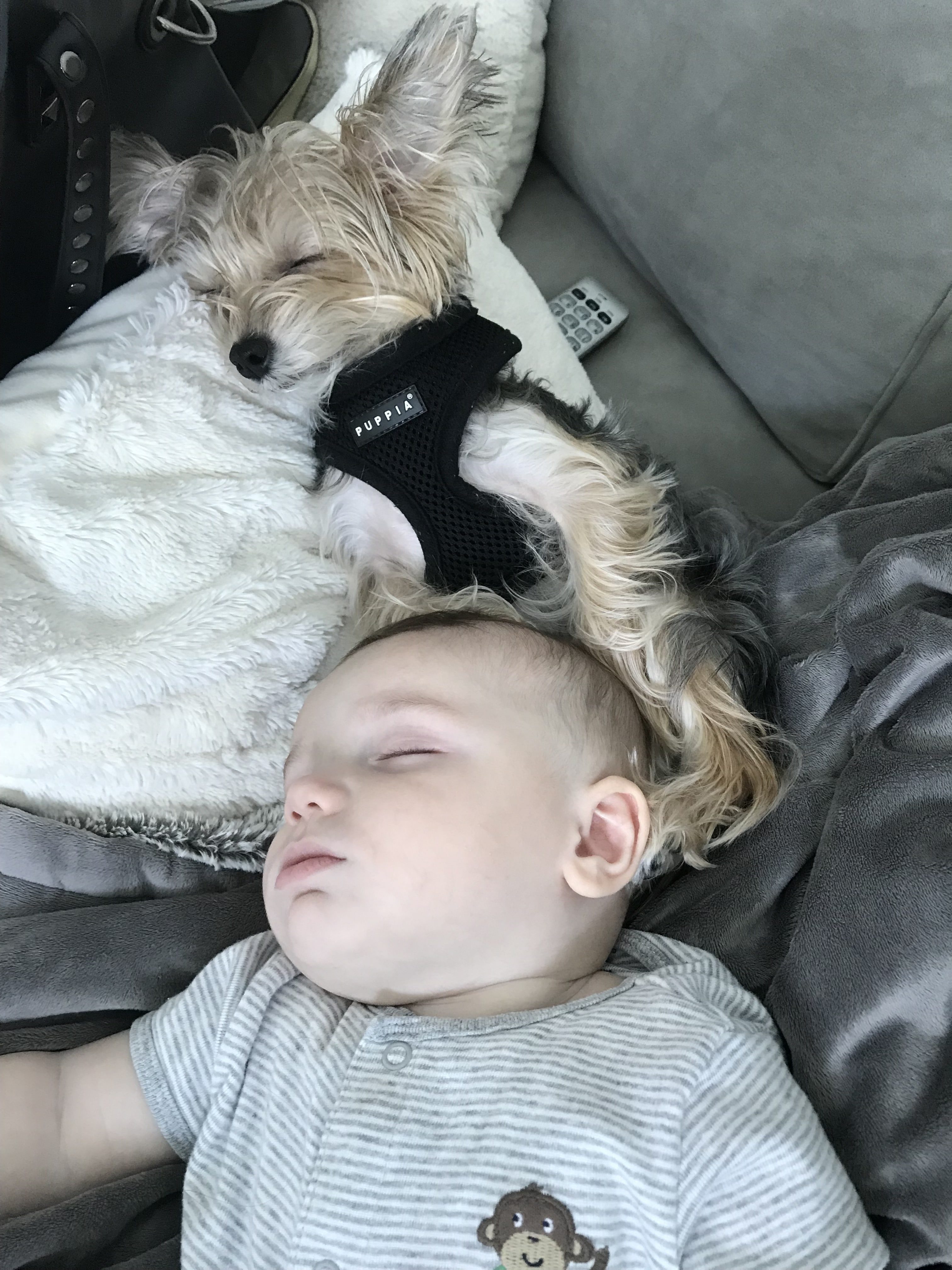 Evie and Duke are inseparable now. Evie can play with herself and chase toys, but there’s nothing more she loves to do than play with Duke. She even found her own spot in Duke’s stroller and hops into the bottom. “It’s her way of saying, ‘I’m going and you’re not leaving me behind,’” Rae said. “Sometimes she doesn’t want to walk and she wants to ride in the stroller as it’s her way of being part of the pack.”

“We definitely wanted to have a dog and our child grow up together,” Rae said. “We didn’t realize the timing would be so close but it worked out really well because they are very bonded and have a very special relationship.”

And it makes it even better that Evie is adopted, according to Rae. “With a rescue you can improve a life and it leaves the world better than it was before. So, you’ve impacted positive change.” 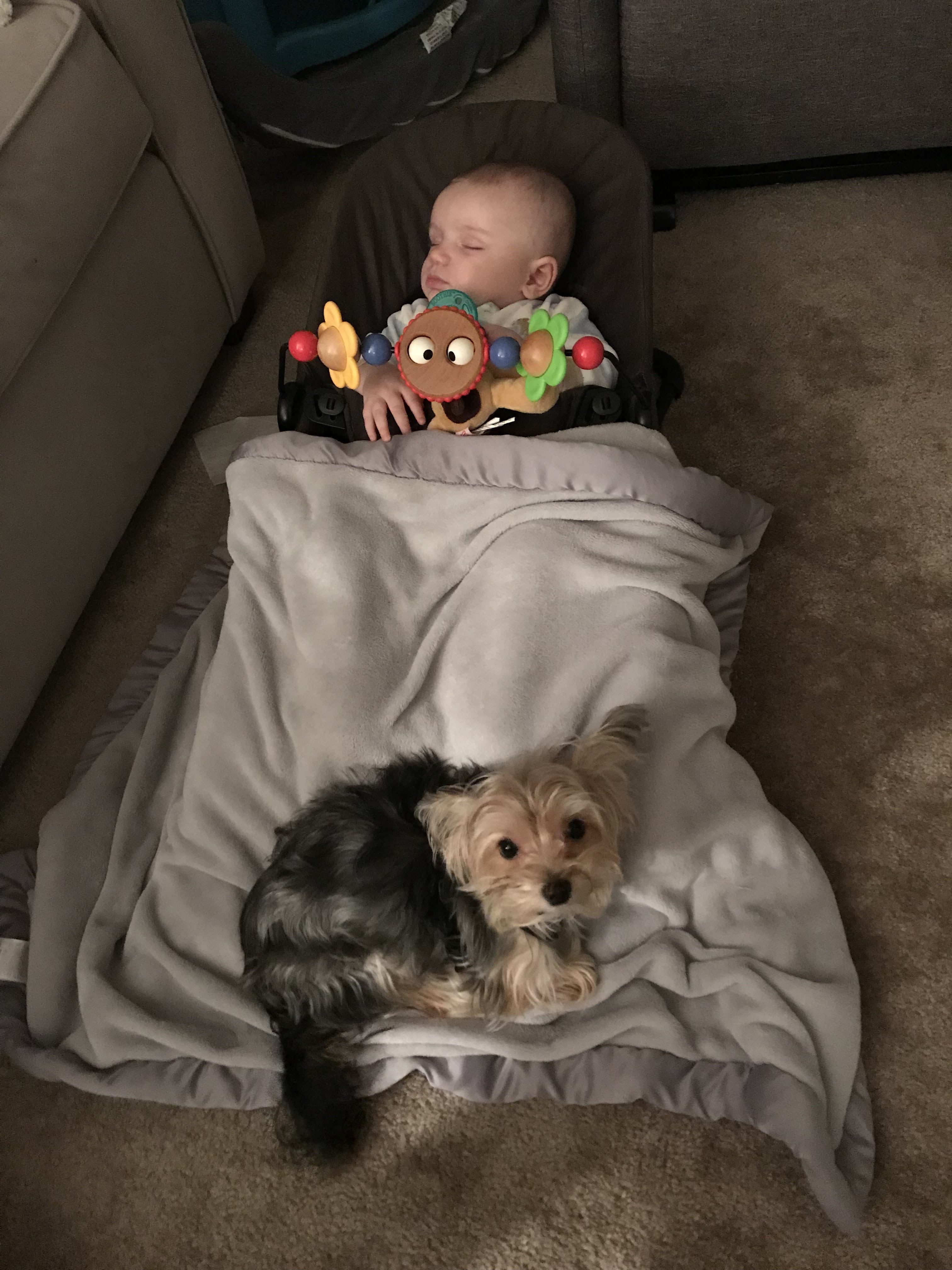 Raising Kids and Dogs Together

For Rae, growing up with a dog was one of the best parts of her childhood. A Yorkie named Cookie came into her family when she was eight years old. “My mom thought it was very important for the family to have a dog,” Rae said. “[Cookie] was definitely my best friend.”

Goldstein was 13 when his parents surprised him with an apricot poodle named Chelsea after he came home from camp. “There were two teenage boys in the family, and they came home with a pink dog. But we had wanted a dog for so long, and she was amazing and lived to 19,” Goldstein said.

They’re both thrilled to give Duke a similar experience. 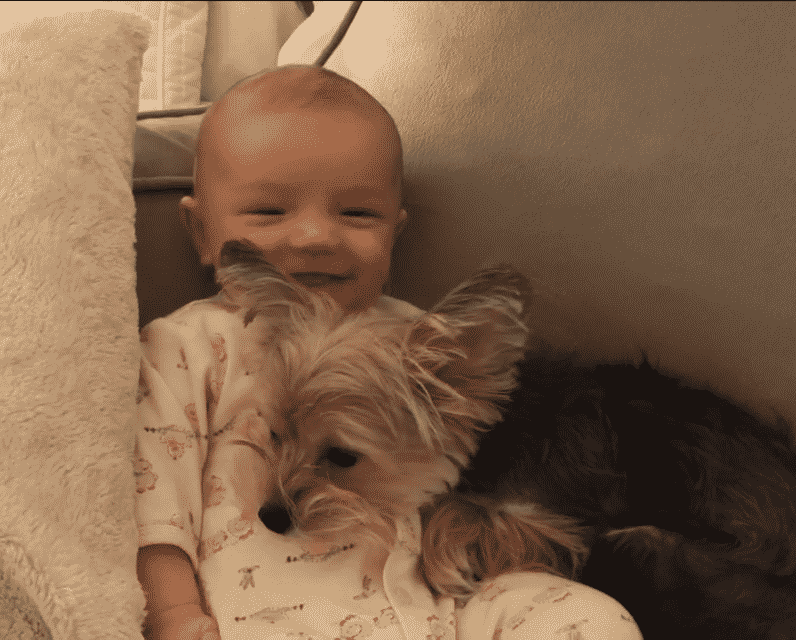 “Everywhere we go, everyone comments on how happy Duke is,” Rae said. “I don’t doubt it’s partly because of having Evie around and having this wonderful relationship with her.”